Vice President Pence is the administration’s top-rated surrogate and the only member of President Trump’s inner circle to have a positive favorability rating.

According to data from a Harvard-Harris Poll survey provided exclusively to The Hill, 47 percent of Americans have a positive view of Pence, compared with 39 percent who view him negatively.

{mosads}Trump rings in at 45 percent positive and 51 percent negative. That’s better than Speaker Paul Ryan (R-Wis.), who posts a 38-42 split, and Senate Majority Leader Mitch McConnell (R-Ky.), who is at 25-41.

Conway, who has clashed with media outlets in explosive interviews over the last several weeks, is at 28 percent favorable and 42 percent unfavorable.

Bannon, who is portrayed as the Grim Reaper on “Saturday Night Live,” pulls the lowest mark of the bunch, with only 20 percent having a favorable view of him.

“Trump lacks strong surrogates as his team’s image has taken on water,” said Harvard-Harris Poll co-director Mark Penn. “Pence and the president are their own strongest advocates, but their support is stalled at less than half the country. This is unusual for the ‘honeymoon’ period but not unusual for recent presidents during their terms.”

Trump has been frustrated by media reports portraying his administration as consumed by chaos and controversy.

Last week, Trump sought to seize back control at a theatrical 77-minute-long press conference and later at a campaign rally in Florida that attracted 9,000 supporters.

There, the president attacked the media, which he has repeatedly assailed as corrupt, dishonest and hell-bent on undermining him. 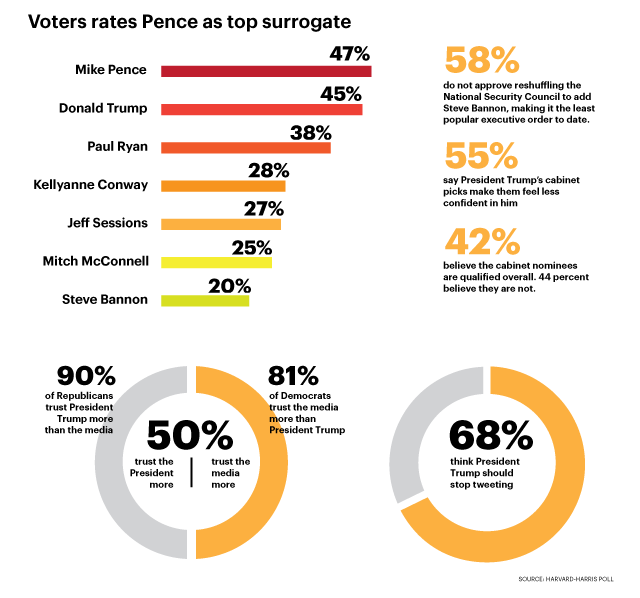 Trump seeks to circumvent the media through Twitter, often driving the day’s news cycle with an early-morning tweet. But 68 percent of voters say Trump should drop the habit, while only 32 percent say he should continue tweeting.

The survey also found that the public is deeply skeptical of Trump’s Cabinet picks.

Fifty-five percent of voters say Trump’s nominees give them less confidence in him, compared with 45 percent who said they inspire more confidence in the president.

Only 42 percent say Trump’s Cabinet nominees are qualified for their posts, against 44 percent who say they’re unqualified.

The online poll of 2,148 registered voters was conducted between Feb. 11 and Feb. 13. The partisan breakdown is 39 percent Democrat, 30 percent Republican, 27 percent independent and 5 percent other. The Harvard-Harris Poll survey is a collaboration of the Harvard Center for American Political Studies and The Harris Poll.