A majority of voters say the Republican plan to repeal and replace ObamaCare will be a step back for the country rather than an improvement, according to a new Harvard-Harris Poll survey provided exclusively to The Hill.

The survey found that 51 percent of registered voters view the GOP effort as moving the country backward, while 26 percent say it would be an improvement.

In general, voters are split on the fate of ObamaCare, with 41 percent saying they support legislation to repeal and replace the healthcare law, versus 43 percent who say they oppose a new healthcare overhaul.

Still, the poll found there is opportunity for Republicans if they can sell their ideas effectively.

The individual mandate is particularly unpopular, with 64 percent of voters saying they support its elimination.

The trick for Republicans will be in dealing with the popular aspects of ObamaCare, such as the Medicaid expansion, which enjoys broad support.

“No question that the voters want ObamaCare repealed and replaced but the president and the Republican leadership have so far failed to sell their plan as the best alternative,” said Harvard–Harris co-director Mark Penn.

“The voters overwhelmingly oppose the mandate but have compassion for the Medicaid expansion. Healthcare is very much the new third rail of American politics with a splintering of the public on what should be done and they are split down the middle on the new plan.” 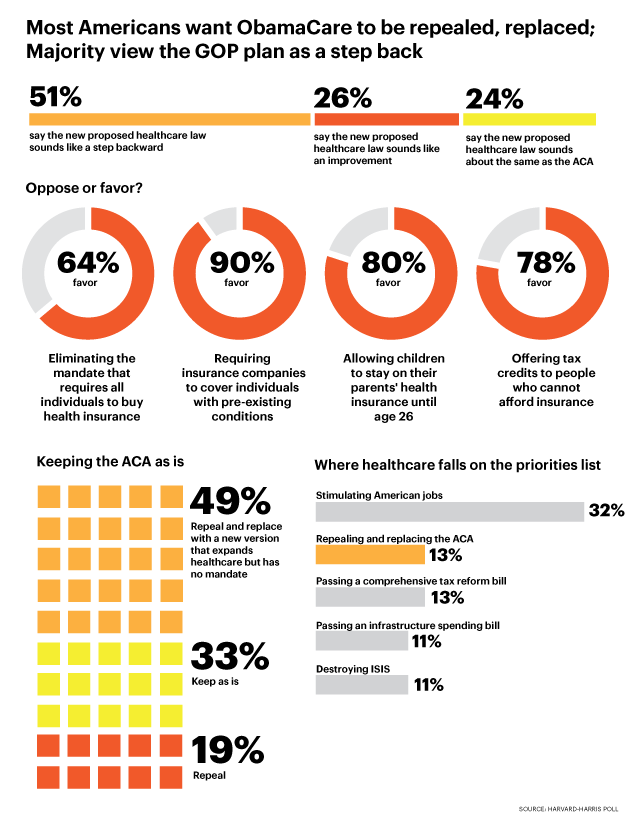 President Trump and Speaker Paul Ryan (R-Wis.) are working to round up votes for the American Health Care Act, which is set to come up for a vote in the House on Thursday.

The legislation has been under attack by the right. Conservatives have derided the bill as “ObamaCare lite” and it is unclear whether it has sufficient support to get through the Republican-controlled House.

The White House is putting its full weight behind the bill.

The president and Health and Human Services Secretary Tom Price will spend the week courting conservative leaders, special-interest groups and other stakeholders. Trump will hold a healthcare-focused rally on Monday in Kentucky, the home state of Sen. Rand Paul (R), who has emerged as one of the most vocal opponents of the bill.

Ryan and GOP leaders, meanwhile, are waging a public relations offensive, furiously whipping support for the bill on Capitol Hill. This week, an outside group aligned with Ryan launched a round of ads in a campaign meant to pressure Republicans into supporting the measure.

The timeline for phasing out the Medicaid expansion is a hang-up for some conservatives.

The current Republican plan would phase out the Medicaid expansion by 2020, something conservatives want to happen sooner.

The Congressional Budget Office (CBO) has projected that the number of people without health insurance would grow by 14 million in 2018 under the Republican plan, with that number rising to 26 million in 10 years. Many of those lapsing are due to the proposed changes to Medicaid, the CBO said.

Still, 64 percent of those surveyed said Congress should prioritize controlling healthcare costs, compared to 36 percent who said the focus should be on covering more people.

Republicans have argued that their plan is focused on controlling costs and making healthcare affordable for more people, rather than providing coverage directly through Medicaid and other means.

The tax credits have been another headache for Republican leaders, as some on the right have described them as a massive new entitlement program.

The Harvard-Harris survey found broad support for providing tax credits to those who cannot afford insurance, with 78 percent saying they favor them.

Ryan said over the weekend that Republicans are “fine-tuning” the bill and would likely do something to address the CBO’s finding that costs for older people would rise under the measure, while costs for younger people would fall.

Meanwhile, the GOP plan would keep two of ObamaCare’s most popular elements.

A provision that requires insurers to cover individuals with pre-existing conditions is supported by 90 percent of voters, and allowing children to stay on their parents’ plans until they’re 26 years old has support from 80 percent of voters.

The online survey of 2,092 registered voters was conducted between March 14 and March 16. The partisan breakdown is 37 percent Democrat, 30 percent Republican, 28 percent independent and 5 percent other.

The Hill will be working with Harvard-Harris throughout 2017. Full poll results will be posted online later this week.