Ivanka Trump briefly took her father’s seat at a G-20 Summit session on Saturday, sitting next to world leaders including British Prime Minister Theresa May and Russian President Vladimir Putin.

A photo posted to Twitter by a Russian G-20 representative shows Ivanka sitting at the table in place of President Trump.

And replaces Pres Trump at the #G20 table as he leaves for bilateral meetings pic.twitter.com/Hf1zfGQeIP

The tweet was deleted soon after posting, but was captured in a screenshot. 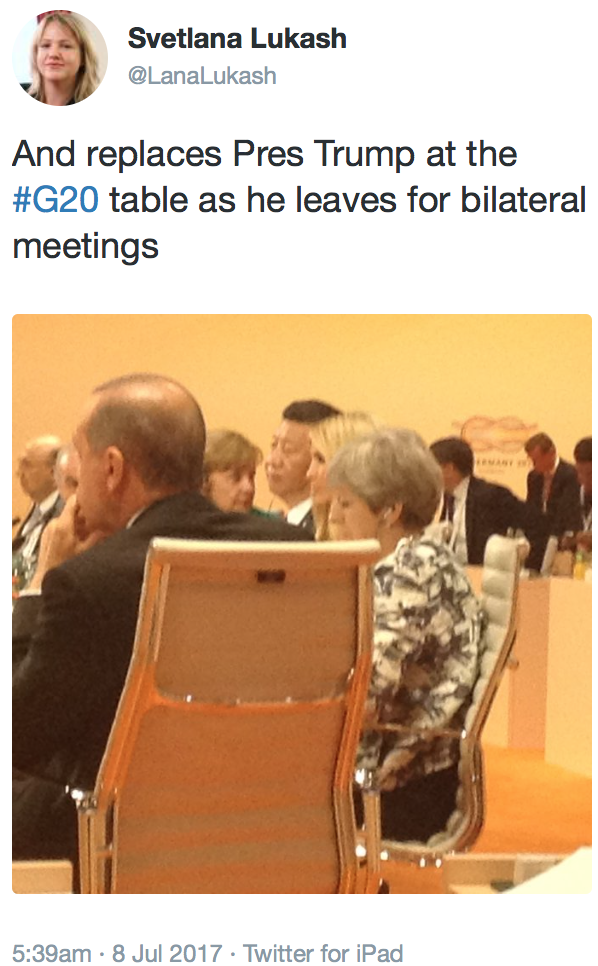 {mosads}Cabinet officials usually replace the president at those sessions when a stand-in is needed. But Ivanka Trump, an official adviser to the president, took his place instead.

“Ivanka was sitting in the back and then briefly joined the main table when the president had to step out,” the White House said in response to the photo. The topic at hand concerned one of Ivanka Trump’s projects, the World Bank finance initiative for women entrepreneurs.

Earlier in the day, Trump committed the U.S. to contributing $50 million to the new World Bank Group Facility for Women Entrepreneurship. Trump praised his daughter for being a “forceful advocate for women entrepreneurs.”

“I’m very proud of my daughter Ivanka, always have been from day one, I have to tell you that,” he said.

“If she weren’t my daughter it would be so much easier for her,” Trump joked. “It might be the only bad thing going for her.”

Biden says Walker doesn’t deserve to be in the Senate