President Trump on Monday shared a fictitious quote from former President Reagan said to predict his own presidency, calling it “cute.”

Trump retweeted a two-year-old post from an account with 13 followers, which included a 1987 photo of Reagan and Trump.

{mosads}The photo is real, but there is no evidence that Reagan actually delivered the prediction. The quotation with the photo states: “For the life of me, and I’ll never know how to explain it, when I met that young man, I felt like I was the one shaking hands with a president.” 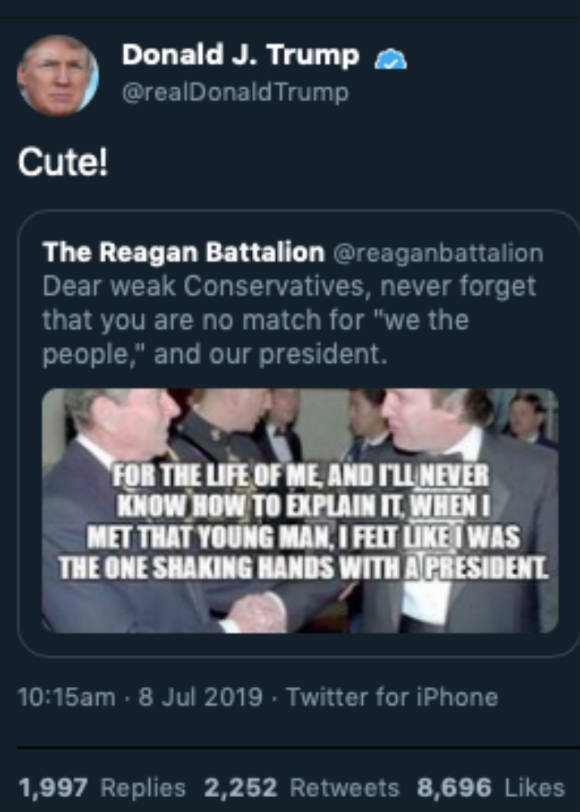 The image was shared widely on Facebook earlier this year before it was flagged as part of the company’s efforts to root out false information and news from its news feed, according to PolitiFact, which rated the supposed Reagan claim “pants on fire.”

The website Snopes reported that the photograph of Reagan and Trump is real and was taken at a 1987 White House reception, but said it found “no record” of the 40th president ever saying the phrase. The site said there is no evidence of the quote being attached to the photo until a July 2016 post on the “Trump Train” Facebook page.

Trump is expected to hold a social media summit at the White House later this week, which is designed to address alleged bias on major platforms against conservatives. Big tech companies like Facebook and Twitter, which have reportedly not been invited to the summit, have denied such claims.