The White House on Friday released a transcript of President Trump

The 16-minute call is largely congratulatory and genial, as it took place on April 21, the day Zelensky won his election. The Ukrainian president invites Trump to attend his inauguration, while Trump raises the possibility of a White House visit for Zelensky.

“When you’re settled and ready, I’d like to invite you to the White House,” Trump tells Zelensky. “We’ll have lots of things to talk about, but we’re with you all the way.”

“Well, thank you for the invitation. We accept the invitation and look forward to the visit,” Zelensky replies. Trump then tells him that’s “very good.”

“We’ll let you know very soon, and we will see you very soon, regardless,” Trump says.

Current and former administration officials have testified that they believe a White House visit for Zelensky ultimately became contingent on Ukraine pursuing investigations that Trump wanted into his political rivals.

Trump did not attend Zelensky’s inauguration, nor did Vice President Mike Pence

Rick PerryTrump's relocation of the Bureau of Land Management was part of a familiar Republican playbook What we've learned from the Meadows documents Trump war with GOP seeps into midterms MORE, then-U.S. special envoy to Ukraine Kurt Volker

Ronald (Ron) Harold JohnsonI'm furious about Democrats taking the blame — it's time to fight back Barnes raises over million in final quarter of 2021 Sen. Ron Johnson: Straight from the horse's mouth MORE (R-Wis.).

Zelensky still has not visited the White House.

The White House memo is not a verbatim transcript of the phone call. It is based on the notes of national security council aides who listened in on the conversation. Under normal practice, calls with foreign leaders are not recorded and transcripts are produced afterwards by putting together notes taken on the call, according to former officials.

The president and his allies are likely to view the call released Friday as favorable to his case. Rep. Devin Nunes

A White House readout at the time of the call said Trump expressed to Zelensky his commitment to working on reforms that "strengthen democracy" and "root out corruption" in Ukraine.

But in the memo released Friday, there is no talk of corruption and little talk of politics as the two leaders exchange compliments and congratulations.

“That was an incredible election,” Trump tells Zelensky. “Again, thank you so very much. As you can see, we tried very hard to do our best. We had you as a great example.”

“I think you will do a great job. I have many friends from Ukraine and they think — frankly — expected you to win. And it’s a really amazing thing that you’ve done.”

Trump boasts about the economy and compares himself to Zelensky, saying “in a way, I did something similar.”

“Well, that’s very nice. I’ll look into that,” Trump replies. “Give us the date and, at a very minimum, we’ll have a great representative.”

Trump has teased over the course of the last week that he would release a transcript of the April phone call, which came before the now-infamous July 25 conversation between the two leaders that is now at the center of an impeachment inquiry in the House.

The president is likely to use the call as a talking point moving forward to both boast about its contents and his willingness to be transparent, even as the White House stonewalls requests for witnesses and documents in the House impeachment inquiry.

“The President took the unprecedented steps to declassify and release the transcripts of both of his phone calls with President Zelensky so that every American can see he did nothing wrong," White House press secretary Stephanie Grisham

The April conversation is notably different from the July 25 call, when Trump urged Zelensky to “look into” the Bidens and “do us a favor though” by investigating a debunked conspiracy theory about the 2016 hack of the Democratic National Committee server.

Lt. Col. Alex Vindman, a key witness in the impeachment inquiry who raised concerns to his superiors about the July 25 call, told lawmakers in a closed-door hearing last month that he felt the April conversation with Zelensky "was actually a very good call."

"Everybody was happy, high-fiving from that call because we were moving in the right direction for Ukraine," Vindman said, according to a transcript of his testimony to House lawmakers.

Vindman is one of several witnesses slated to testify in public next week as part of the House impeachment inquiry.

Trump has defended his July 25 call with Zelensky, calling it “perfect” and accusing Democrats of a partisan “witch hunt.” He has also insisted there was no quid pro quo in his interactions with Ukraine.

Here's a copy of what the White House released on Friday:

First Conversation Had Between President Trump and President Zelensky of Ukraine 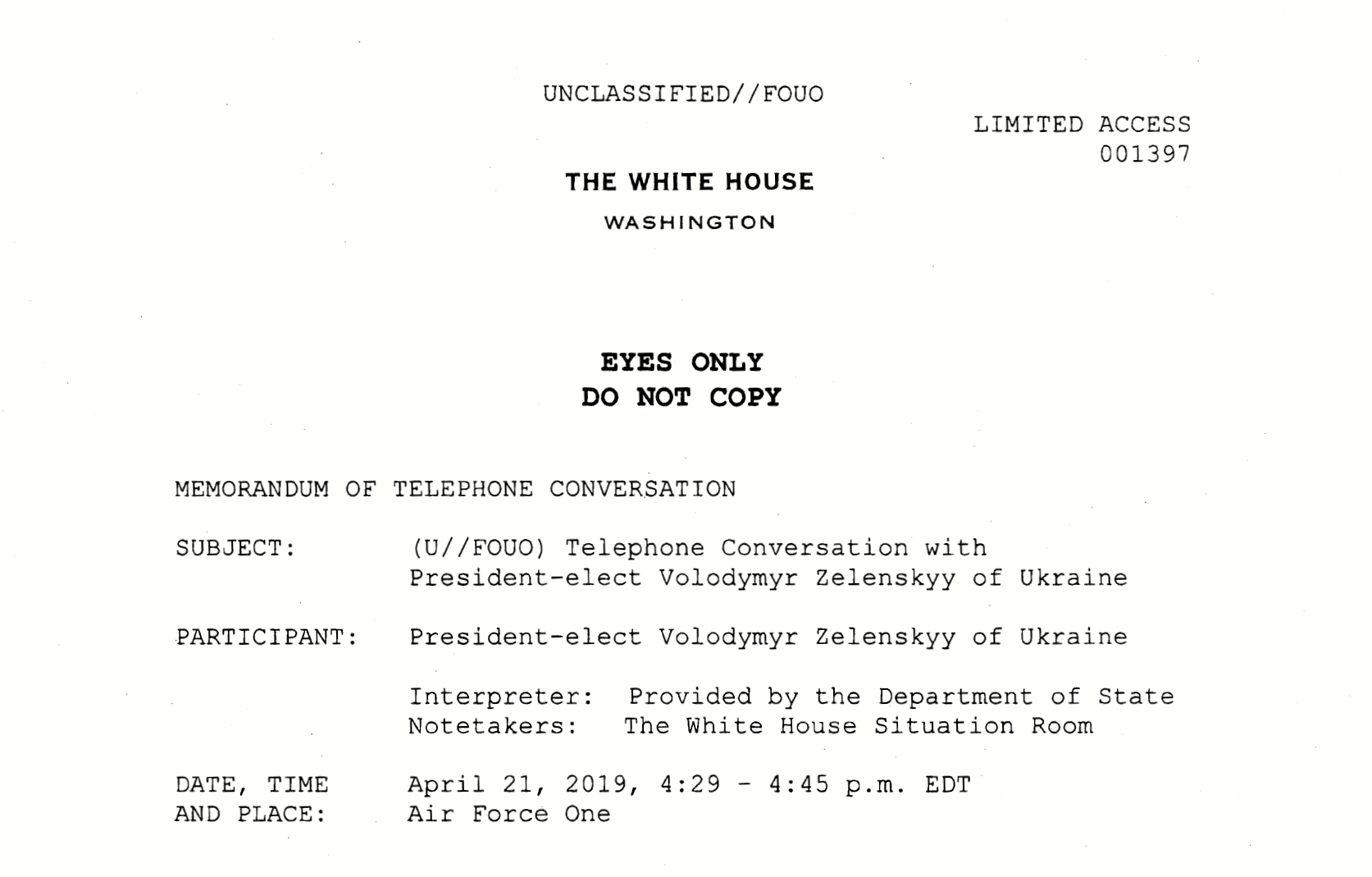 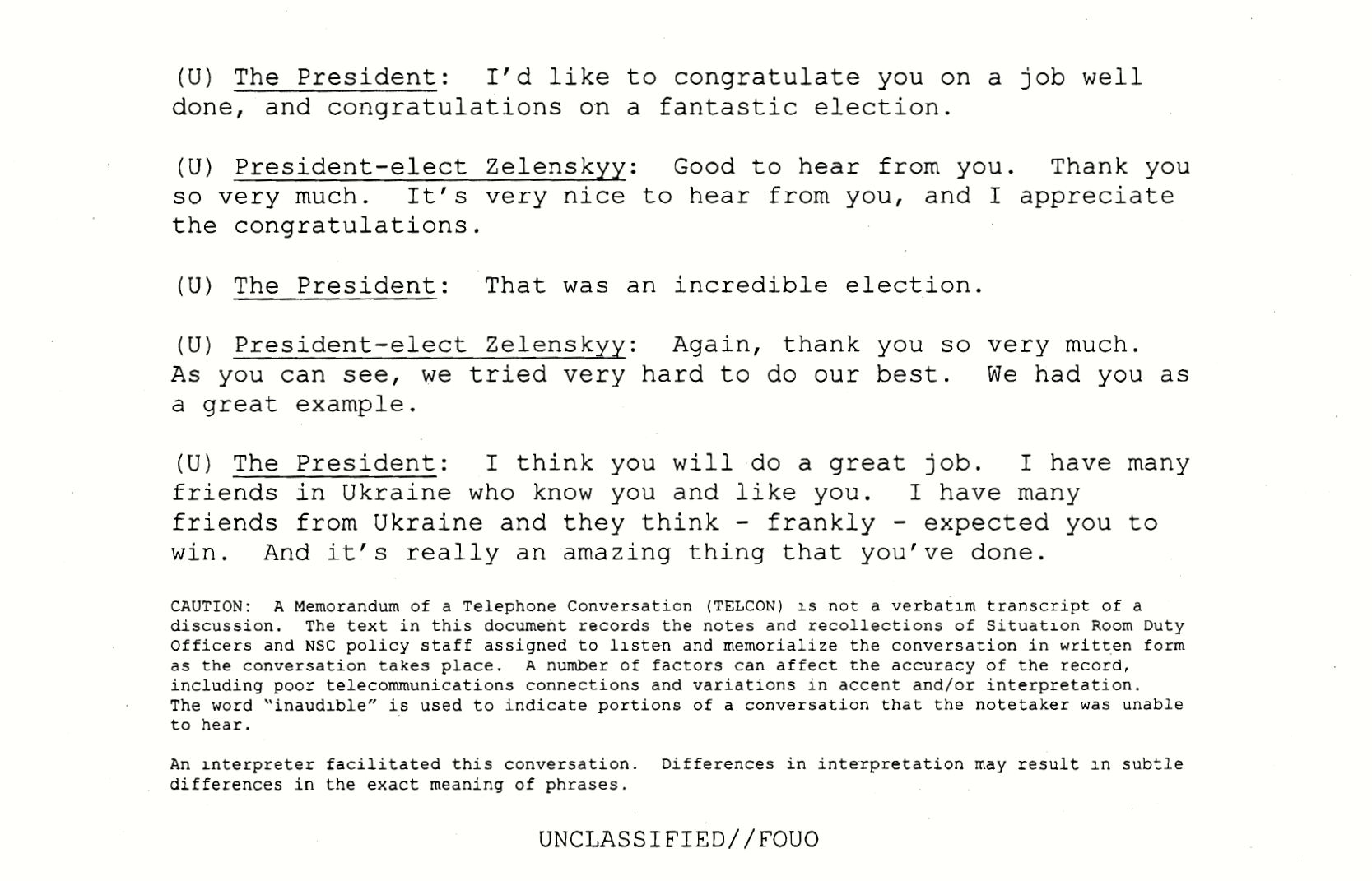 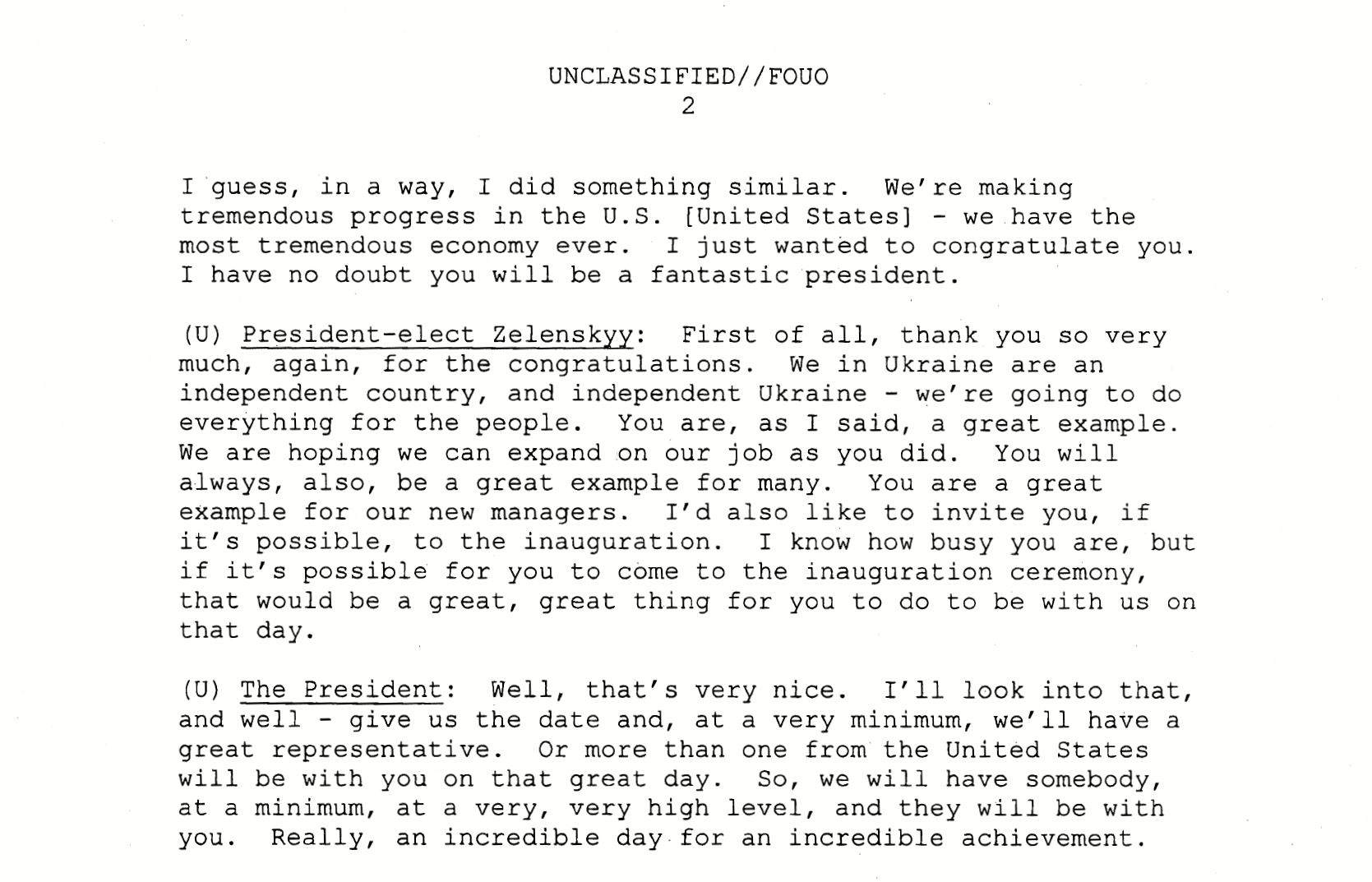 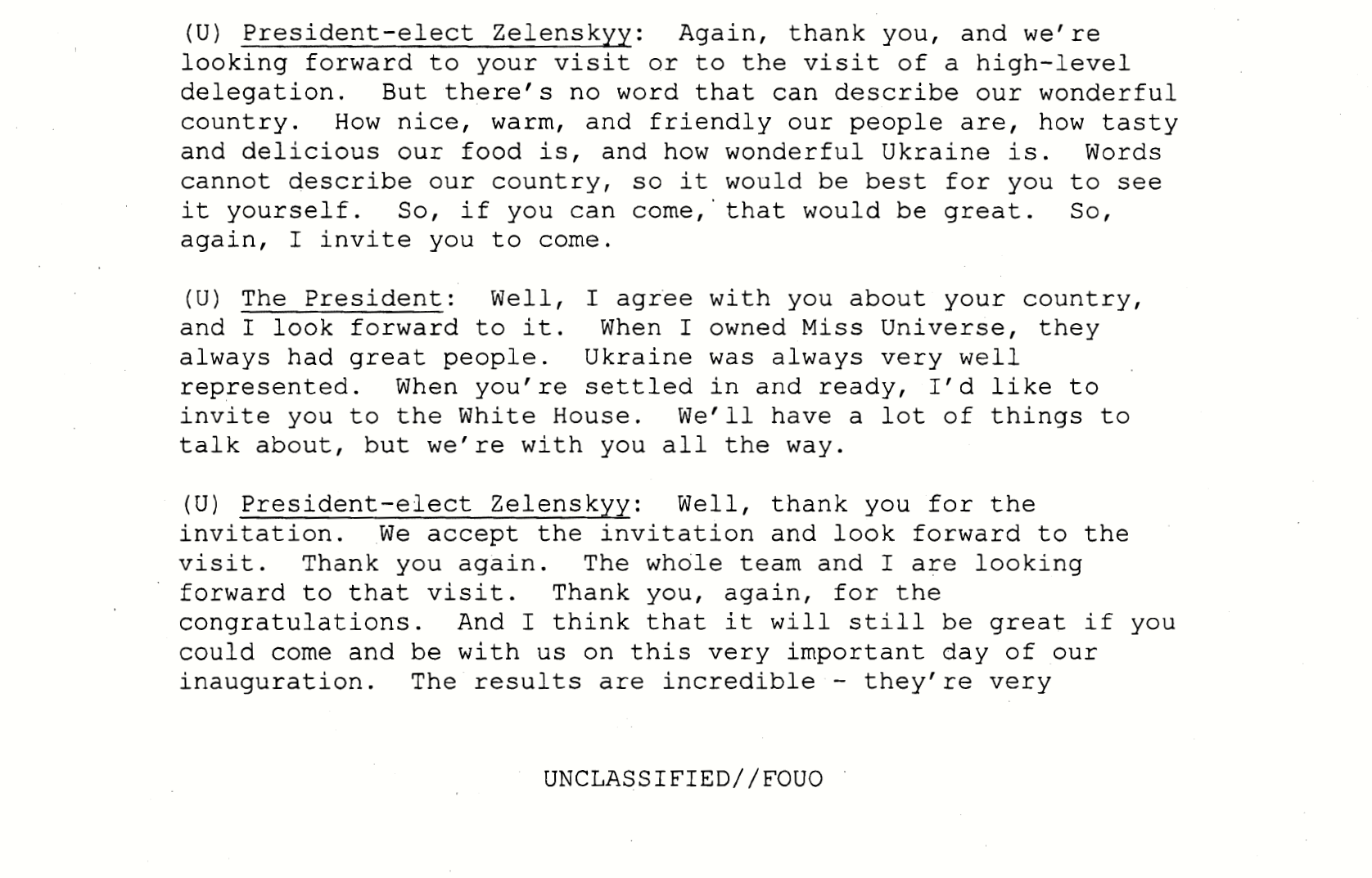 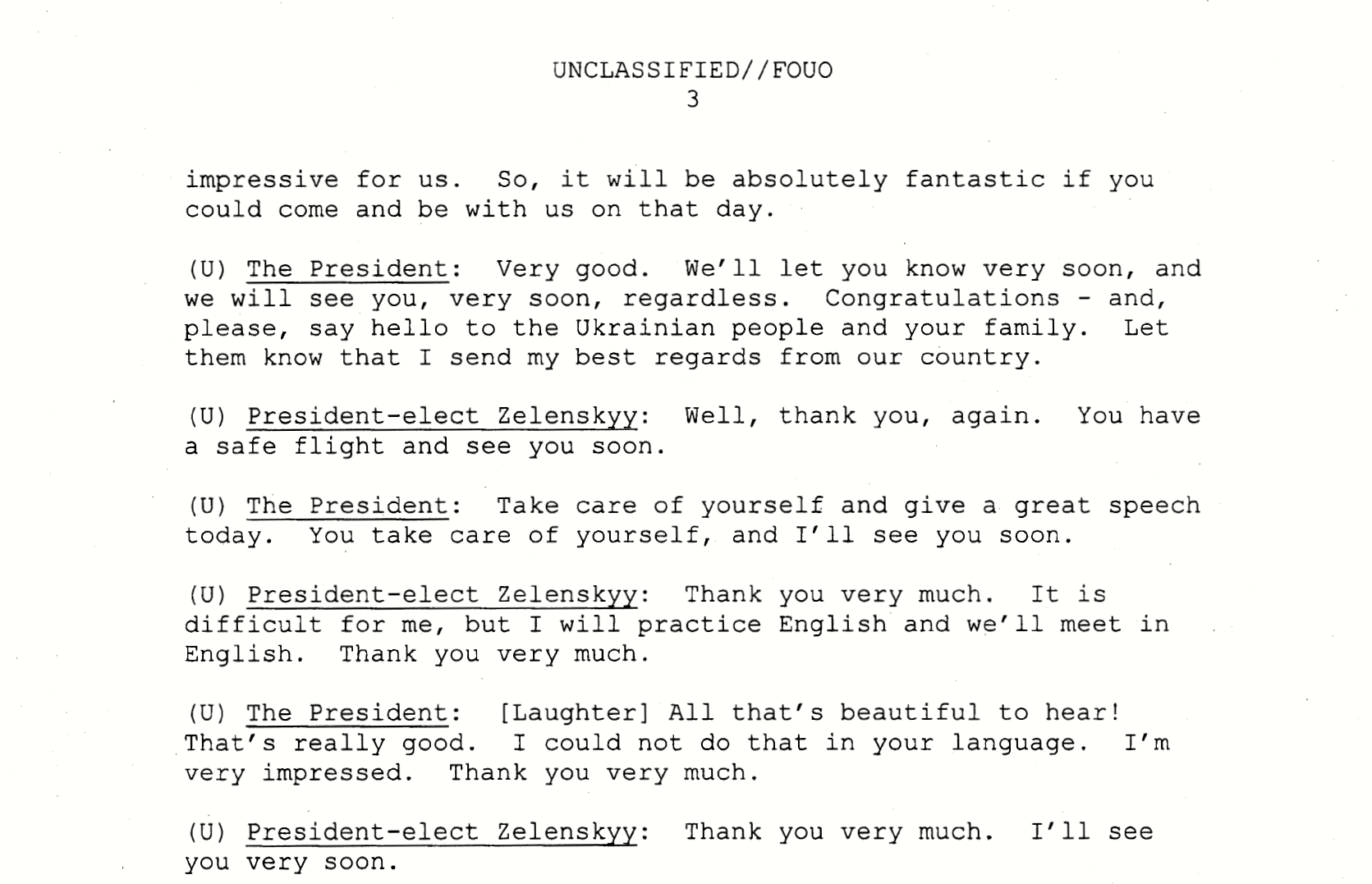 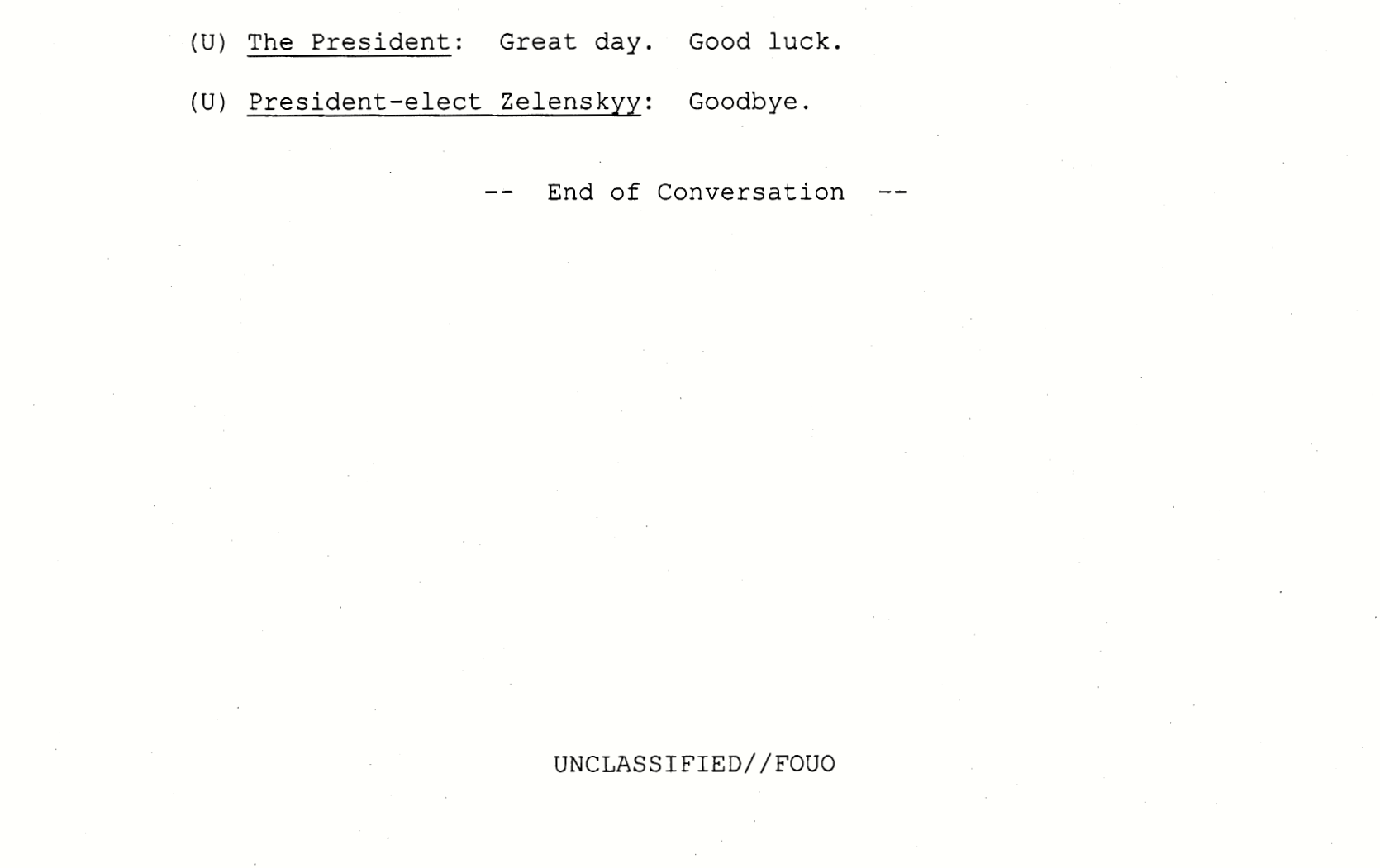 More From The Web

Don't miss a brief. Sign up for our daily email.