Dozens of National Guard troops were positioned on the steps of the Lincoln Memorial on Wednesday night as protests in Washington, D.C., entered their fifth consecutive day following the death of George Floyd.

In an extraordinary scene, troops stood in separate rows along the steps of the monument as a throng of protesters gathered at the Lincoln Memorial Reflecting Pool. Some law enforcement officials were pictured wearing “military police” vests in front of a barricade that was positioned in front of the steps.

The appearance of a band of troops at one of the nation’s most iconic monuments came as protests escalated throughout the nation in response to the police killing of Floyd, an African American man who died in police custody in Minneapolis. 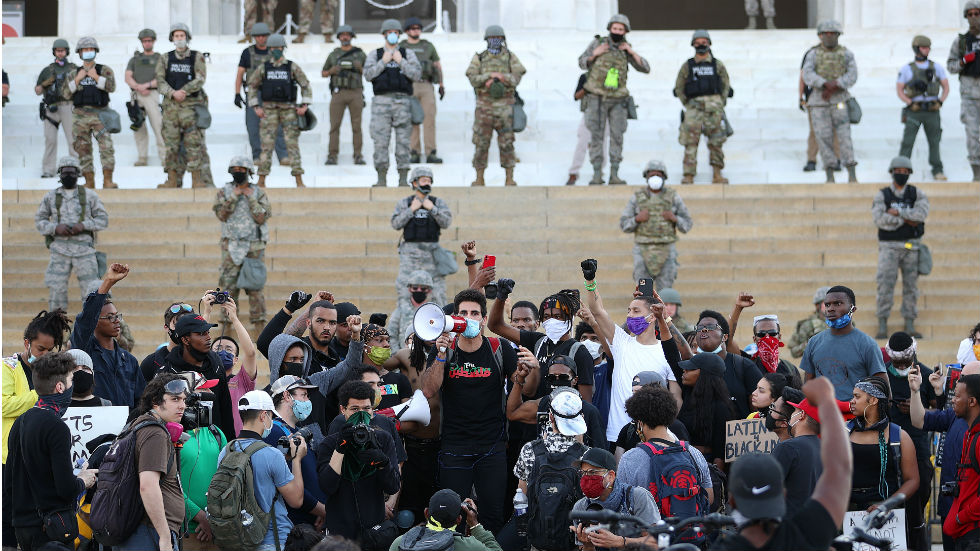 Protests in cities throughout the U.S. have devolved into violent confrontations between police and protesters and have led to looting and vandalism of property. In Washington, D.C., fires were set near the White House, and historic landmarks, including the Lincoln Memorial, became the targets of vandalism over the weekend.

Trump has responded to the violence by threatening to activate the military in cities that do not quell the unrest.

Tensions boiled over in Washington on Monday after law enforcement fired pepper bullets and flash-bangs toward throngs of protesters peacefully demonstrating outside the White House. The move was followed by a visit from Trump to St. John’s Episcopal Church, a target of arsonists the previous night, where he held a Bible aloft during a photo-op.

Several lawmakers condemned the president’s move, calling it an unnecessary show of force against a peaceful demonstration

Defense Secretary Mark Esper on Tuesday asked state National Guards to send some of their troops to assist local and federal police and the D.C. National Guard, according to The Washington Post.

Troops from Indiana, South Carolina and Tennessee were expected to arrive by Tuesday night in the capital. Maryland and Ohio have also sent troops to the District. Virginia Gov. Ralph Northam (D) said that he refused the Pentagon’s request.

Huge throngs of protesters remained in separate parts of the city as Washington, D.C., entered its 7 p.m. curfew.