The delegate math is starting to look grim for Donald Trump’s rivals, with the front-runner poised to close in on the 1,237 needed to win once the GOP contest turns from proportional states to winner-take-all.

Trump’s challengers and skeptics are holding out hope that they can overcome his early lead by scooping up big delegate prizes in the winner-take-all states that will begin casting ballots on March 15.

{mosads}But as the presidential race stands today, the real estate mogul is the candidate with the best chance for a delegates windfall on that day.

He leads Florida Sen. Marco Rubio and Ohio Gov. John Kasich in their home states — the first two winner-take-all contests on the calendar.

Furthermore, the dearth of winner-take-all states overall — there are only eight — and their late place in the calendar could make it difficult for the rest of the field to catch up. Trump could also run the board in a couple of hybrid states that hold contests on March 15, as he did in South Carolina.

University of Georgia political science professor Josh Putnam, who is widely viewed as the authority on issues pertaining to delegate math, told The Hill, “If Trump does as well as he’s expected to on Super Tuesday next week and establishes a lead, and then goes on to win Ohio and Florida, it would pretty much be impossible to catch him.”

That’s how things are lining up, at least at this point in the race, with Trump having established himself as the prohibitive front-runner and the rest of the field fighting for his delegate scraps.

After Nevada’s caucuses on Tuesday night, Trump has 80 delegates, compared to 16 for Ted Cruz, 14 for Marco Rubio, five for John Kasich and three for Ben Carson.

After resounding victories in New Hampshire and South Carolina, Trump will head into the proportional Super Tuesday contests on March 1 as the favorite to win a plurality of delegates.

Eleven states will award delegates on Super Tuesday, when about a quarter of all outstanding delegates will be up for grabs. Trump leads in the most recent polls of eight of those 11 states.

He’s also running close in the remaining three — including in Texas, where he and Cruz appear likely to split the lion’s share of the 172 delegates up for grabs.

Polling is sparse in the nine states that will hold contests in the two weeks between March 1 and March 15, but if current national polling holds, Trump will likely head into the March 15 winner-take-all contests with a comfortable lead.

On that day, Kasich and Rubio will face reckonings in their home states.

A poll released on Tuesday found Trump with a 5-point lead over Kasich in Ohio, making the businessman the favorite to take all 66 delegates in the Buckeye State.

And while there hasn’t been a survey of Florida released since Former Gov. Jeb Bush dropped out of the race, Trump is leading in polls there by more than 20 points, according to the -RealClearPolitics average.

In two recent polls, Rubio, even with all of Bush’s support, would not be within single digits of Trump in Florida. The GOP front-runner has pulled more than 40 percent support in the last two Florida polls, making him the easy favorite to seize all 99 of the Sunshine State’s delegates.

Two hybrid states will vote on March 15. These are states that award a big delegate prize to the overall statewide vote winner and then hand out the rest based on who carries the individual congressional districts.

So far, the only hybrid state to vote this cycle has been South Carolina, where Trump swept all 50 delegates up for grabs.

That could happen again on March 15 for Missouri’s 52 delegates, analysts say.

It could also happen on that date in Illinois, where a poll released this week found Trump ahead by 13 points — about the same margin he won by in South Carolina — although sweeping that state’s 69 delegates is a tougher task because most are allocated by congressional district.

Regardless, the lack of pure winner-take-all states will make it difficult for any of the GOP candidates to overcome Trump’s lead after March 15 if the race stays on its current course.

That rule has been borne out in the last two election cycles, Putnam said.

This cycle, nearly 60 percent of delegates will have been allocated by March 15.

Trump is widely expected to be the leader at the end of that day.

According to Putnam’s theory, Trump would have the 1,237 delegates needed to wrap up the nomination by May 3 — before the contest gets to the back half of the winner-take-all states or even California’s considerable delegates prize. 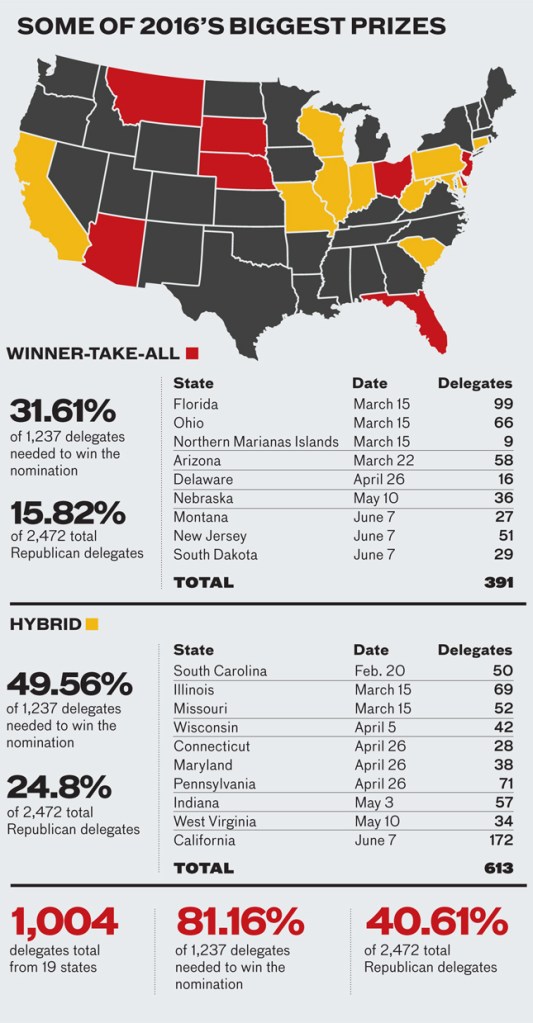