Hillary Clinton’s favorability ratings are historically low and increasingly a concern for her supporters.

Clinton is now viewed unfavorably by 55 percent of the electorate, according to the HuffPost Pollster average, which tracks findings from 42 different polling outfits. Only 40.2 percent of people view her favorably, according to that average.

Even Democrats acknowledge those findings are a problem.

“The No. 1 reason that her favorability is so bad is that you have large numbers of Americans who say they don’t trust her,” he said. “I could make it sound more complicated than that, but that’s really what it is. Voters see her as the ultimate politician, who will do or say anything to get elected.”

The historic comparisons are stark. At this point in the 2008 presidential cycle, then-Sen. Barack Obama (D-Ill.) was seen favorably by 62 percent of voters and unfavorably by just 33 percent.  Even in February 2012, the closest comparable point in his re-election campaign, he had a net positive favorability rating in the Gallup poll of 2 percentage points, compared to Clinton’s current net rating of minus 11.

In March 2000, then-Texas Gov. George W. Bush (R) was viewed favorably by 63 percent of respondents in the Gallup poll and unfavorably by 32 percent.

The saving grace for Clinton is the messy Republican primary, where the two leading vote-getters are politicians who fare even worse in the favorability index.

Donald Trump was viewed unfavorably by a full 65 percent in the most recent Gallup poll and favorably by only 29 percent, a net rating of minus 36 points. Cruz fared better than Trump but still worse than Clinton, at net minus 16 points, 32 percent favorable to 48 percent unfavorable.

Some in Clinton’s circle suggest that her low numbers are partly the consequence of her sheer longevity in public life. But they also acknowledge that some issues in the recent past — the spotlight on her earnings after leaving the State Department or the long-running controversy over her private email server — may have sapped public sympathy for her.

One longtime Clinton friend admitted that her earnings from lavishly paid speeches were problematic in terms of perception but added, “This is an anti-establishment cycle, and you can’t be around for 30 years and not be considered establishment.”

The source also made a point often heard from Clinton supporters: that attacks from ideological opponents over a long period of time are bound to have an effect, regardless of how well Clinton parries them.

“This is the cost of doing business in 21st century politics,” the insider said. “Their ambition is to scuff you up, and you can’t be out there for 20 or 25 years and not have a few dings. This has been a 25-year campaign [by opponents], and that campaign has been about scuffing her up.”

Others within the Clinton orbit insisted that the former secretary of State’s ratings are nothing to worry about.

“It’s fair to be confident that those numbers will rise,” said Tracy Sefl, a Democratic consultant who served as a senior adviser for Ready for Hillary, the super-PAC that helped lay the groundwork for Clinton’s campaign. “History suggests as much and the craziness of this campaign cycle suggests as much.”

Another Clinton insider argued that her tepid ratings will matter less “when it gets down to a one-on-one situation, when people can size up both candidates in light of their opponents.”

“The polarization of politics will likely mean that both the Republican and Democratic nominees will have pretty high unfavorables going into the fall, but that de facto cancels out the effect of those numbers,” the source said.

But independent observers note that, while a general election is by its nature comparative, the capacity of each candidate to inspire supporters and thus drive turnout can also be crucial.

“Where it becomes a problem is the question of turnout and enthusiasm,” said Grant Reeher, a professor of political science at Syracuse University. Reeher added that, in the Democratic primary, Clinton’s rival, Sen. Bernie Sanders (I-Vt.), “is generating quite a bit of enthusiasm. In that sense, he is overperforming, even though he’s losing. She, I think, is underperforming in terms of turnout and enthusiasm.”

Clinton’s favorability ratings have fluctuated wildly during her quarter-century at the forefront of public life. Her numbers soared when she served as Obama’s secretary of State, though that may have been because the post has traditionally been seen as above partisan politics.

The other period during which Clinton enjoyed very high favorability ratings is one she surely does not want to repeat. In 1998 and early 1999, as the scandal over President Bill Clinton’s affair with White House intern Monica Lewinsky dominated the headlines, Clinton was also seen favorably by more than 60 percent of voters, according to Gallup.

When it comes to her solo political career, the picture has never been as sympathetic.

“The political impression that I think she leaves strikes a lot of people as inauthentic, as something they can’t quite trust,” said Reeher. “The fact that she has been in the game so long contributes to that. And her impressions are pretty cemented right now.” 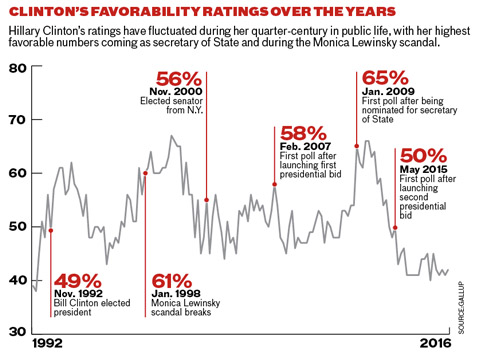