Watchdog groups are poking holes into former President Bill Clinton’s promise that his family’s foundation will stop taking foreign and corporate cash if his wife wins the presidency.

They say it would be relatively easy for foreign governments or individuals to funnel cash into the foundation during a Hillary Clinton presidency without the American public ever learning of the foreign contributions — despite the former president’s promises outlined in an Aug. 22 open letter published on the Clinton Foundation’s website.

{mosads}Karen Hobert Flynn, the president of the non-partisan watchdog Common Cause, said there were “lots of different ways” that untraceable foreign money could reach the Clinton Foundation under the current broad terms of Bill Clinton’s promise.

She said it can be difficult to determine who is donating to a limited liability corporation or another partnership and that the terms of the open letter would allow such an entity to donate to the Clinton Foundation.

“You could have some kind of LLC or other partnership where it isn’t even clear who the donors are,” Flynn said.

As an example, she pointed to a Canadian-registered charity, the Clinton Giustra Enterprise Partnership, which sent more than $25 million of largely untraceable donations to the Clinton Foundation before being pressured into revealing some of its donors.

The partial list of donors released by CGEP founder Frank Giustra includes several Canada-based mining and precious metals companies. Giustra, who is himself a Canadian mining magnate, said in a statement that that he won’t reveal all the charity’s donors because “under Canadian laws and charitable best practices, charitable donors have a right to privacy.” 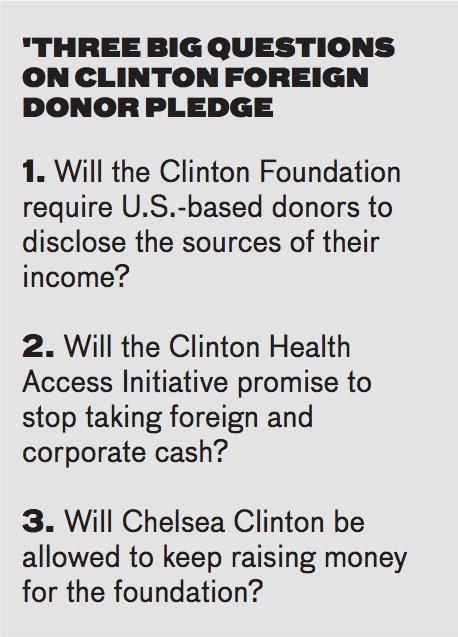 The American public has to instead take Giustra at his word that “the Clinton Giustra Enterprise Partnership (Canada) has never received donations from any foreign or Canadian governments or government-controlled entities.” The public would have to trust the same unverifiable promises under a Hillary Clinton presidency if the Clinton Foundation doesn’t require all of its donors to disclose their sources of income.

While Bill Clinton’s proposal would stop a foreign-registered entity from transferring largely untraceable money as CGEP did, there’s nothing in his proposal to stop a foreign government or individual from giving millions of dollars to a U.S.-registered foundation, which could then transfer that cash on to the Clinton Foundation.

“We know from the campaign finance world that determining whether foreign funds are behind a donation from a U.S.-based organization that does not disclose its donors is almost impossible,” said Larry Noble, the general counsel of the Campaign Legal Center, a non-partisan watchdog.

“It just isn’t going to sit well with the public if it starts becoming exposed that a 501(c) [non-profit entity] is making huge contributions, and then later we can figure out that 501(c) has actually been set up by Saudi Arabia,” he said.

The Clinton Foundation, which did not respond to questions for this article, would not say whether it would demand that its U.S.-based donors disclose the sources of their income.

It’s equally unclear how the Clinton Foundation plans to enforce its latest promises.

Watchdogs recall that the Clinton Foundation made sweeping written promises about transparency to the Obama administration in late 2008 before Hillary Clinton was confirmed as secretary of State.

But the foundation failed to make good on a number of its pledges, including accepting, and not disclosing, $2.35 million from a family foundation linked to a uranium company that had sensitive and lucrative business before Clinton’s State Department.

An honor system isn’t going to cut it if Hillary Clinton wins the presidency, these watchdogs say.

“Who is going to enforce these rules?” Noble said.

“As far as I can tell, there is no mechanism to enforce what is an internal foundation policy.”

The Clinton Foundation did not answer questions about what oversight or enforcement mechanisms it would put in place should Clinton win in November. And Bill Clinton provided no details in his open letter about how his foreign and corporate ban would be enforced.

Nor would the foundation say whether it would consider outsourcing this oversight role to an independent authority.

An independent audit and full disclosure of donors is what the foundation must do if it wants the public to trust that Hillary Clinton’s White House doesn’t grant special access to foundation donors, Flynn said.

“We need an external audit … by auditors that are not connected to the Democrats or the Clinton campaign,” she said.

“CHAI is a separate legal entity from the Clinton Foundation with its own board which will soon determine its next steps,” wrote spokeswoman Regan Lachapelle in an email to The Hill.

If CHAI keeps taking foreign cash, it could be a magnet for foreign governments or individuals hoping to curry favor with the Clintons.

Bill Clinton has promised to step down from the organization’s board if his wife is elected, but it is widely known among the donor community that the group’s work remains close to the former president’s heart.

In Clinton’s letter, when he was explaining the steps that he and the foundation would be taking to remove the appearance or reality of the corrupting influence of money, the former president cited the health initiative’s work at the top of the list of foundation accomplishments of which he was proudest.

The group’s board, which is expected to announce a decision on whether it will keep accepting foreign donations soon, will also be forced to consider other potential loopholes, including whether it would be allowed to transfer cash to the larger Clinton Foundation if it keeps taking foreign funds.

Transparency will be another concern.

While the Clinton Foundation has largely kept its transparency promises, there have been a number of notable failures. And when it comes to the health initiative, there remains a line item in the organization’s disclosure form — within the $100,000 to $1 million bracket — that simply says “individual and unsolicited donations,” without revealing the identities of these donors.

Flynn mentioned other concerning areas where corporate or indirect foreign influence could glom onto the Clinton Foundation while still complying with Bill Clinton’s promises.

While big companies won’t be allowed to donate, their CEOs and board members can write checks as large as they like, she said.

Flynn also said she thought the Clinton Foundation should stop taking lobbyist cash, particularly from lobbyists registered with the Department of Justice to represent foreign nations under the Foreign Agents Registration Act.

The Clinton Foundation didn’t respond when asked whether it would take money from lobbyists representing foreign governments if Hillary Clinton is elected.

Finally, there remains the question of the Clinton family’s continued involvement in the foundation.

“Bill Clinton’s statement acknowledges ethics issues with foundation contributions, but when parsed, his solutions sound a lot like it depends on what the definition of ‘is’ is,” said Charles Spies, a top Republican campaign finance lawyer.

“The loopholes of multiple foundations and Chelsea’s continued involvement are enough to subsume meaningful restrictions.”

With Chelsea Clinton remaining on the Clinton Foundation board and likely allowed to keep raising money while her mother is president — her spokeswoman declined to respond when asked whether Clinton would be allowed to continue fundraising — the American public can have little confidence that the Clinton family is disentangled, said Flynn.

“Having Chelsea on the board is going to raise the specter in people’s minds that there could be communications, and I think that’s a problem,” she added.

Holman said it was “a big, big step to refuse to accept corporate and foreign money” but by “still having Chelsea on the board of directors, whether or not she’s involved in fundraising, that means that special interests will continue trying to throw money at the feet of the Clintons.”

“As long as Chelsea or anyone in the Clinton family is on the board of directors it’s still going to be tied to that family,” he added.

Holman recommended that “what they should do is not only ban corporate and foreign money but also remove Chelsea from the board.”

The Clinton Foundation’s supporters defend the organization’s work, which includes the health initiative’s declared achievement of helping more than 11.5 million people in more than 70 countries have access to cheaper HIV/AIDS drugs.

These supporters say they are the victims of unfair double-standards and the political smearing of a wholly benevolent foundation, due only to the fact the Hillary Clinton is running for president.

Still, the Clintons are responding to the pressure, which is only escalating with newspapers such as The New York Times calling on them to ban foreign and corporate donations immediately and to cut all family ties if Clinton wins in November.

In a USA Today op-ed on August 23, Clinton Foundation President Donna Shalala summed up the complicated untangling that lies ahead.

“We recognize the importance of separating the foundation’s work from the perception of potential conflicts of interest, and we have outlined a responsible approach for the future,” Shalala wrote.

But in the same piece, Shalala also wrote that “significantly scaling back the Clinton Foundation and our programs that are helping millions of people around the world — even before we even know the outcome of the election — would be needless and irresponsible.”

Warren throws support behind Biden for reelection, defers on Harris as running mate