Sixty days into President Trump’s term, registered voters are split over how he is performing as the nation’s leader.

According to new data from the Harvard-Harris Poll provided exclusively to The Hill, 49 percent approve of the job Trump is doing and 51 percent do not.

{mosads}The partisan breakdown of the survey is 37 percent Democrats, 30 percent Republicans, 28 percent independents and 5 percent others.

Trump’s job approval moved slightly closer to an even split since last month, when the Harvard-Harris Poll put him at 48 percent positive and 52 percent negative.

These approval numbers are on the high end compared with other recent polls; online surveys like Harvard-Harris have consistently recorded higher approval ratings for Trump than traditional phone polls.

The best poll for Trump this month was a Monmouth University survey that had him at 44 percent approval and 46 percent disapproval.

The RealClearPolitics average, which includes eight polls conducted during March, has Trump at 42.8 percent approval and 51.3 disapproval, for a net rating of minus 8.5 points. 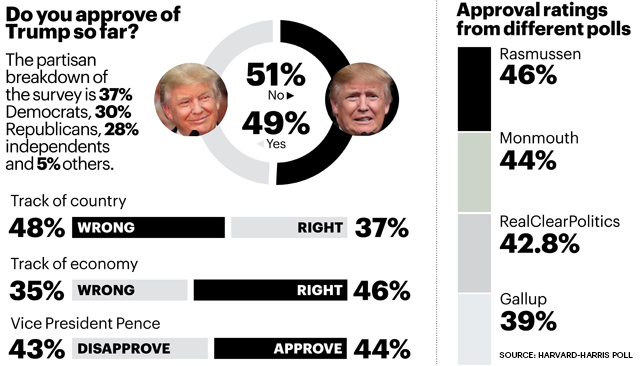 While a plurality of those surveyed by Harvard-Harris believe the nation is on the wrong track, most believe the economy is headed in the right direction, a feeling that can help boost Trump’s rating.

“There has been no statistically significant change in Trump’s ratings from last month, but economic confidence continued to rise, and that has to be a key reason why he has held up despite adverse media coverage,” said Harvard-Harris co-director Mark Penn.

The president’s popularity — gauged by his favorability rating — is worse than his job approval rating.

According to Harvard-Harris, Trump is viewed favorably by 44 percent of registered voters and negatively by 51 percent.

This is also on the high end compared with other surveys.

Rasmussen has Trump’s approval rating at 40 percent positive and 54 percent negative. Trump’s favorability rating is underwater by nearly 13 points in the RealClearPolitics average.

Vice President Pence is the only member of Trump’s inner circle with a positive favorability rating: 44 percent positive and 43 percent negative.

While Trump’s job approval rating sits 50 percent, a plurality of those polled say the country is on the wrong track, 48 percent, compared with 37 percent who say it’s on the right track.

That’s an improvement over February, when 52 percent said the country was on the wrong track and 34 percent said it was headed in the right direction.

Still, Americans contacted by Harvard-Harris are bullish on the economy.

Forty-six percent say the economy is on the right track, compared with 35 percent who say it is on the wrong track. That’s up from a 43–39 split last month.

A majority of whites polled, 52 percent, say the economy is looking good, and 56 percent of blacks say it is headed the wrong way.

The White House has been eager to claim credit for the robust January and February jobs reports, saying companies are increasing hiring amid optimism that Trump will foster a more friendly business environment than the previous administration.

Democrats have countered that former President Barack Obama handed a healthy economy to Trump, pointing to an unemployment rate below 5 percent.

The stock market has so far boosted Trump’s claims, soaring to new highs during his first two months in office.

But tying his job performance to the stock market could hurt the president when the market turns. The Dow Jones industrial average, Standard & Poor’s 500 index and Nasdaq composite each fell about 1 percentage point on Tuesday.

Some financial analysts have suggested the GOP’s struggles to pass healthcare reform have instilled doubt in investors about the president’s chances of enacting his economic agenda, which includes tax reform.

Trump and his aides have previously claimed credit for the rising stock market, but the White House backed off those claims on Tuesday as stocks fell.

“You can’t look at one indices [sic] and say that’s the benchmark for an entire economy,” White House press secretary Sean Spicer said.

“You see confidence levels both in small business and other surveys that show there’s continued confidence in the market.”

Overall, 63 percent of registered voters describe the economy as strong, and 37 percent call it weak. That’s a 4-point improvement over February’s poll.

The Harvard-Harris Poll surveyed 2,092 registered voters online between March 14 and 16. It uses a methodology that does not produce a traditional margin of error. The Hill will be working with Harvard-Harris Poll throughout 2017. Full poll results will be available online later this week.