Vermont Sen. Bernie Sanders (I) is the country’s most popular active politician, underscoring his importance to the Democratic Party as it seeks to rebuild in the wake of a disastrous 2016 election cycle.

{mosads}White House chief strategist Stephen Bannon is far and away the least popular political figure in the poll, with only 16 percent viewing him favorably, compared with 45 percent having a negative view of him.

“In losing to Hillary [Clinton], Bernie Sanders has floated above today’s partisan politics while Bannon has, rightly or wrongly, taken the blame for the administration’s failures,” said Harvard-Harris co-director Mark Penn. “It is symptomatic of the Democrats increasingly consolidating to the left while the Republicans are fractured and unable to come together. Sanders is an asset to the Democrats while Bannon is a liability to the administration.”

Only 32 percent have a negative view of Sanders, including nearly two-thirds of Republicans.

Besides Republicans, though, Sanders is popular among broad swaths of the registered voting population. 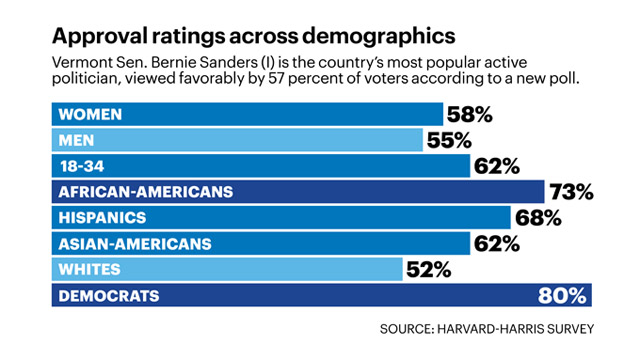 Those figures could buoy a potential 2020 presidential run. Sanders, who would be 79 on Election Day in 2020, hasn’t ruled out another bid.

Among registered voters, fifty-eight percent of women view Sanders favorably, as do 55 percent of men. He is most popular among people aged 18 to 34, who give him a 62 percent approval rating. Sanders also has majority support among those over the age of 50.

While Sanders struggled during his Democratic primary challenge against Clinton in states with large African-American voting populations, he is viewed favorably by 73 percent of black registered voters.

Sanders is viewed favorably by 80 percent of registered Democrats, even though he has steadfastly refused to join the party whose presidential nominee he campaigned for.

The Vermont senator is touring the country with new Democratic National Committee Chairman Tom Perez as the two work to unify a party that split sharply along the line between grassroots activists and the establishment during the primaries.

There is still lingering bitterness between Sanders supporters, who believe the party stacked the deck against their candidate, and mainstream Democratic operatives, who view Sanders as an interloper who will drag the party too far left.

Still, no other Democrat comes close to matching Sanders’s popularity.

Sen. Elizabeth Warren (D-Mass.), a progressive and potential presidential candidate in 2020, is in positive territory at 38 percent favorable and 32 unfavorable.

Clinton is at 42 percent positive and 53 percent negative. That’s down from a 44-51 split in same poll in February.

On the Republican side, President Trump’s favorability rating is at 44 percent positive and 51 negative.

Vice President Pence is the top-rated official in the White House, posting a 44-41 split.

The other Republican officials in the poll overall had negative approval ratings.

White House counselor Kellyanne Conway is at 24 positive and 46 negative. Trump’s son-in-law and senior adviser, Jared Kushner, comes in at 23 positive and 34 negative.

FBI Director James Comey, who scored criticism from both sides during the presidential campaign, is also deep in negative territory in the poll. Only 18 percent said they view him favorably, compared with 36 percent who said they view him unfavorably.

The online survey of 2,027 registered voters was conducted between April 14 and April 17. The partisan breakdown is 36 percent Democrat, 31 percent Republican, 30 percent independent and 3 percent other. Harvard-Harris Poll uses a methodology that doesn’t produce a traditional margin of error.

The Harvard-Harris Poll survey is a collaboration of the Harvard Center for American Political Studies and The Harris Poll. The Hill will be working with Harvard-Harris throughout 2017. Full poll results will be posted online later this week.