Democrats in an urban box

No presidential nominee has ever received more votes from America’s largest cities than Hillary Clinton did in 2016. The turnout machine her campaign built attracted a massive coalition of younger voters, well-educated voters and minorities.

But even as America’s urban areas grow at a record pace, Clinton proved that blowing out cities and large metropolitan areas is necessary but not sufficient to a Democrat’s hopes of winning the White House.

{mosads}Democrats have, in effect, built themselves into a geographic box, one that hinders their ability to reclaim control of the U.S. House of Representatives and makes it difficult to win the Electoral College and the White House.

This is the second story in The Hill’s Changing America series, in which we explore the four divergent trends that are shaping the country: the growing importance and impact of urban cores, the slow wilt of rural America, the rise of the most diverse generation in American history and the radically changing behavior of the largest voting bloc within the electorate.

There is little debate among experts that America’s urban cores are growing in importance, both economic and political. The country’s major metropolitan areas have become the engines of the American economy. Today, fully a quarter of the nation’s economic output comes from just a handful of the largest metropolitan areas: New York City, Los Angeles, Chicago, Dallas, Houston, Washington, D.C., and San Francisco.

“Our economy has become more clustered and concentrated,” said Richard Florida, a University of Toronto professor who studies cities and co-founded CityLab, which reports on urban trends.

The clustering has spurred an explosive population boom, too, as younger Americans seek out jobs that are no longer available in exurban and rural settings. For the first time since the invention of the automobile, cities are growing faster than suburban areas.

And at the same time, urban areas have fostered islands of cultural and economic liberalism amid a sea of rural conservatism. The nation’s largest cities have been pioneers in the movement to raise the minimum wage, embrace the alternative energy sector and ban discrimination against LBGT people.

The 2016 election results illustrate the longer-term trend of liberalized cities: About 22 percent of the 65 million votes Clinton received nationwide came from the 25 most populous counties alone, a larger share than any Democratic presidential nominee has won in the last seven elections.

Clinton’s success is not a product of population increases alone; political changes are evident in the Republican decline in these major metropolitan areas.

Seeking reelection in 1992, George H.W. Bush won 16 percent of his total vote from the 25 largest counties. The Republican share in large metro areas has spiraled downward in every election since: In 2016, President Trump received just 11.4 percent of his total votes from those 25 counties. Trump received fewer actual votes from those counties than Mitt Romney, John McCain and George W. Bush.

While clustering may be good economics, it doesn’t make a winning political coalition. Democratic voters are overwhelmingly likely to live in deep-blue congressional districts and less likely to live in swing states critical to both parties’ paths to winning the Electoral College.

Those voters have also changed the Democratic Party’s approach to cultural issues, over which there remain deep divides between urban and rural voters.

The urban voters on which Democrats rely most heavily — on average younger, more diverse and better educated than the electorate as a whole — demand a party that embraces cultural liberalism. Those voters have pulled the Democratic Party to the left; they were the voters most receptive to a message like “Stronger Together,” Clinton’s 2016 slogan. 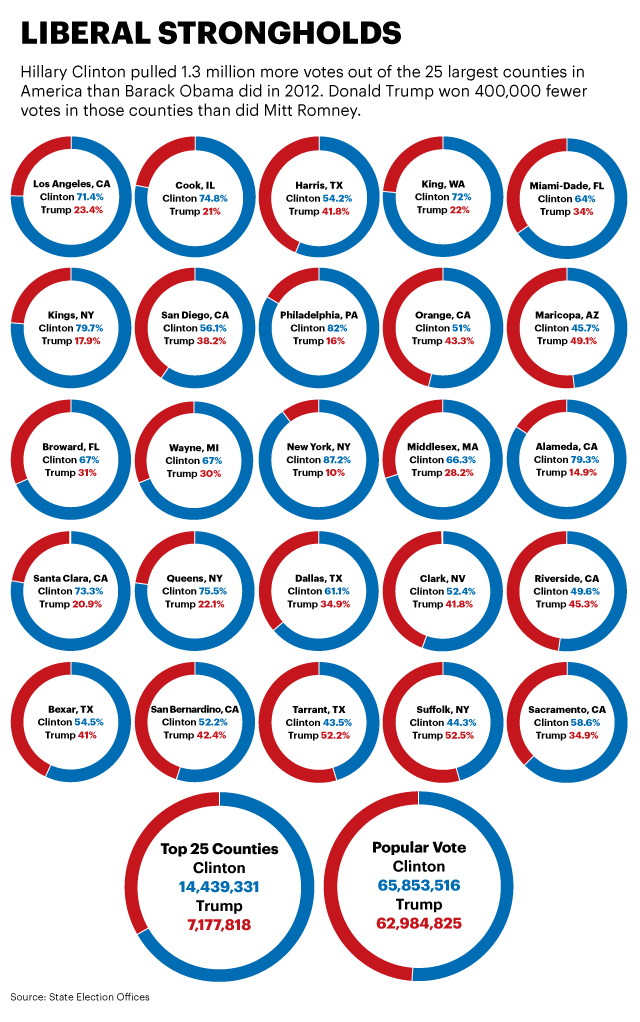 At the same time, some Democrats fear that those cultural messages carry an implicit rejection of exurban and rural voters outside the mainstream left — voters the party needs to win over to capture critical swing states.

“We have embraced an urban-centered inclusive diversity worldview that truly embraces all types of diversity and shuns dissent from that,” said Matt Canter, a Democratic strategist who has conducted polling on the future of his party.

The metropolitan boom is spurred by a changing economy, one in which commodity prices are plunging and the manufacturing sector struggles to survive. In response, the country has increasingly relied on the finance sector, information technology, education and services for growth, economists say.

“They’re picking up a larger slice of the economic pie,” said Mark Muro, a senior fellow at the Brookings Institution’s Metropolitan Policy Program.

Those industries are so concentrated in major cities that they have attracted an incredible number of migrants, both from nearby exurban and rural counties and from overseas. In the last five years, the 100 largest counties have added more than 7.3 million people, an average of 5.5 percent of their population, according to U.S. Census Bureau data.

Those moving into urban areas make up the most diverse generation of Americans in the nation’s history. Just under half of the millennial generation is made up of African-Americans, Hispanics, Asian-Americans and other minorities.

Those who live in cities, especially among younger cohorts, are more likely to have earned a bachelor’s degree, too. Couple diversity with high levels of education, experts say, and it makes for a much more liberal electorate.

Clinton’s campaign spent heavily to turn out voters in these urban cores, especially in places like Miami, Charlotte, Philadelphia and Las Vegas, according to a senior campaign strategist, who asked for anonymity to discuss internal machinations.

But some — both Democrats and Republicans — believe Clinton’s focus on the younger, more diverse electorate came at the expense of its appeal to a broad swath of older white voters who still make up the largest voting bloc within the electorate.

“The problem for Democrats is that this plumping up of their urban margins has accompanied or perhaps caused them to take such a radical posture on cultural issues that they no longer can sustain their historical margins in rural and industrial counties,” said Brad Todd, a Republican strategist who keeps close tabs on party performance in urban areas.

America’s metro areas are growing geographically as well, thanks in large part to fast-rising housing prices. The search for affordable housing now takes people to farther-out suburbs than ever before: The San Francisco Bay Area now extends to Sacramento, where home prices have almost doubled in the last five years. Milwaukee and its southern suburbs are attracting thousands of new residents who once lived in Chicago. The rural hamlets of eastern Pennsylvania are now booming with refugees from expensive and densely packed New York and Philadelphia.

Those who move to those increasingly far-flung exurbs are still voting as if they live much closer to the urban cores.

But the pace of change is glacial, in political terms, and likely insufficient to reverse Republican success in exurban and rural areas. Left alone, it would be years before the geographic expansion of major metropolitan areas translates into political victories for Democrats. What has happened in California, where Democrats control a supermajority in both chambers of the state legislature, will only gradually happen in places like Atlanta, or Dallas, or Miami, as those liberal urban enclaves expand.