How the GOP came to dominate, and be dominated by, rural voters

The Ohio River begins at the confluence of the Allegheny and the Monongahela, at a pristine park in the heart of downtown Pittsburgh. It flows for nearly a thousand miles, along the borders of West Virginia and Ohio, Kentucky and Indiana and Illinois before it empties into the Mississippi. This was once the heart of the Democratic Party, where union men in hard hats came home from the mines after a shift.

As recently as 2009, Democrats represented 10 of the 17 U.S. House districts through which the Ohio flows; now, they hold just two, accounting for only 40 miles of riverfront. The districts Democrats still hold are both urban seats, in Pittsburgh and Louisville.

The changing political sediments and economic undercurrents of the Ohio River Valley have been magnified in rural regions across America. Rural counties already struggling to hang on felt the pinch of the economic recession most acutely, and blamed politicians most harshly. Rural America is adrift, it’s dying and it’s voting increasingly Republican.

In 2016, Trump won a higher percentage of the vote in rural communities, 62 percent, than any Republican presidential candidate in modern times, according to exit polls. George W. Bush won 60 percent of the rural vote in 2000.

But the GOP’s increasing reliance on votes from rural areas dominated by blue collar whites has drawn the party into a demographic box, one that threatens the party’s future as more diverse groups of voters elsewhere rise in political power. At some point, the party’s geographic advantage will be overwhelmed by that demographic disadvantage. 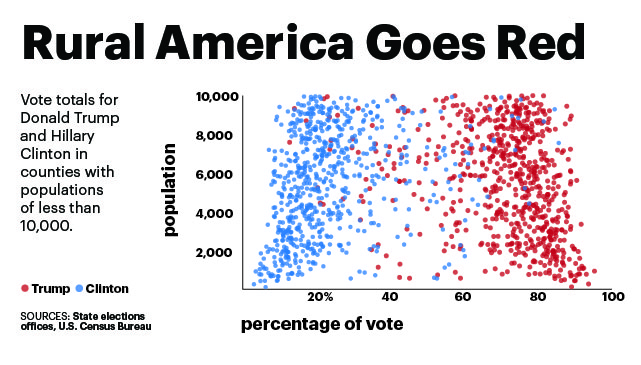 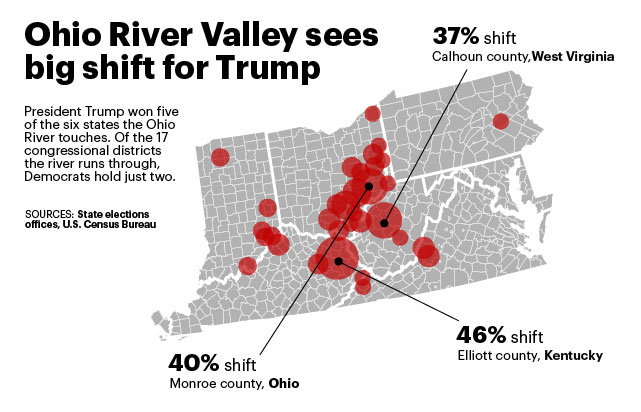 This is the third story in The Hill’s Changing America series, in which we explore the two sets of divergent trends that are shaping the country: The slow and agonizing death of rural America, contrasted with the robust growth in urban cores, the rise of the most diverse generation in American history, contrasted with the radically changing behavior of the largest voting bloc within the electorate.

The story of rural America’s decline is a long-term tale of globalization, of automation and technology, of volatile commodity prices and the rise of alternative energy sources. Younger residents have long fled small communities for economic opportunity in big cities, a trend that is only accelerating today as the economy evolves away from its agricultural and manufacturing base.

A review of data collected by the U.S. Census Bureau, the Bureau of Labor Statistics and the Bureau of Economic Analysis shows America is less dependent on industries centered in rural communities than ever before.

Today, agriculture makes up less than 1 percent of the nation’s gross domestic product, down from 8 percent in the years after World War II. Manufacturing accounts for just 11.7 percent of GDP, down from a fifth of the American economy when Ronald Reagan took office. Nondurable goods like food, textiles, petroleum and coal contribute half as much to the national GDP as they did in the late 1950s.

At the same time, the finance sector — disproportionally likely to be centered in major metropolitan areas — makes up 20 percent of the national GDP, up from just 10 percent in 1947.

More recently, commodity prices have plummeted. Soybeans and wheat fetch a little more than half their post-recession peak in 2012. Corn prices are less than half what they were in 2012.

Taken together, the slumping manufacturing sector and low prices have meant hard times for the Ohio River Valley. The 72 counties the Ohio River flows through have collectively lost nearly 9,000 manufacturing jobs in the last five years. Half those counties have fewer agricultural and mining jobs than they did in 2010.

Meanwhile, 97 of the 100 largest counties in America grew over the last five years.

“The prospects for the rural commodity-based economy are not good, are pretty low for a long period of time,” said Mark Muro, director of policy at the Brookings Institution’s Metropolitan Policy Program. “We’ll continue to see out-migration, which is the American way, for better or worse.”

Voters in these suffering rural areas have taken their frustrations out on politicians who run Washington. In 2006 and 2008, Democrats beat Republican incumbents in rural House districts like Indiana’s 8th and 9th, which both border the Ohio River, as well as rural seats in New York’s Hudson Valley, northern New Hampshire, southern Minnesota and eastern Iowa.

The shift toward Republicans began in 2010, when the GOP regained control of the House by picking up 63 Democrat-held seats. Of those 63, 30 were at least 40 percent rural. Many of the most rural districts that flipped — seats now held by Reps. Martha Roby (R-Ala.), Rick Crawford (R-Ark.), Trent Kelly (R-Miss.), Vicky Hartzler (R-Mo.) and Morgan Griffith (R-Va.) — are no longer considered competitive.

At the presidential level, Democrats have struggled for years to connect with rural voters, though their more precipitous recent decline has been astounding: Among the 2,135 counties with fewer than 50,000 residents, President Barack Obama won about a quarter, 452, in 2008. He won just 328 of those counties in 2012. Hillary Clinton won just 194 in 2016.

In some regions, the Democratic decline is especially pronounced. In West Virginia, Clinton won more votes in the 2008 Democratic presidential primary than she did in the 2016 general election, even though twice as many people voted in the general than in the primary.

“We had this flawed notion that when you looked at the Panhandle and the rural counties, [Obama] represented the floor,” said Tom Bonier, a Democratic data analytics expert. “It was not only the floor, it was not the floor by a double-digit amount.”

Yet, the Republican share of the vote among urban and suburban voters has stagnated. Among non-white voters, the share has fallen over time, astoundingly so in recent years.

Larger, more diverse suburbs and urban cores are growing, while white, rural communities shrink. Because of the way U.S. House districts are drawn, that gives Republicans a geographic advantage, though it puts them at a demographic disadvantage.

“They’re largely white, and they’re largely old,” William Frey, a demographer at the Brookings Institution, said of rural communities. “The demography is not on the side of a Trump message.”

The 2016 election results hint that suburban communities, especially those where a large percentage of the population has achieved a college degree, may be on the brink of a shift toward Democrats. Last year, Clinton won 23 of the 25 best-educated counties. Even in the two exceptions, Douglas and Mineral Counties in Colorado, Trump underperformed Mitt Romney’s 2012 margins.

What’s more, rural voters are still struggling to get back what they lost in the recession. They have shown a willingness to punish the party in power, regardless of which party that is, putting the onus on the Trump administration to bring back jobs that are almost certainly lost to other nations, technology or circumstance.

Trump taunts Haley about past statements on challenging him