The RNC has raised more than $104 million since Trump took office in January, fueled by a surge in donors who have never contributed to the party before. For the first time in recent memory, Republicans are raking in more money from those small-dollar donors than they are from big-spending whales who write four- or five-figure checks.

The surge in contributions has given Republicans a clear financial advantage a year before the midterm elections, an edge some Democrats see as threatening to their hopes of capitalizing on anti-Trump anger both among their base and among independent voters.

“I do think the Republican spending advantage is back,” said Kelly Ward, a former executive director of the Democratic Congressional Campaign Committee (DCCC). “Democrats have worked hard to close the spending gap over the past few cycles, but the Republican donors are scared of losing power and are turning on the spigots.”

The Republican National Committee ended September with $44 million in the bank, according to its latest filings with the Federal Election Commission (FEC). The Democratic National Committee (DNC), which emerged from a devastating loss in 2016 and a contentious leadership fight earlier this year, has only $7 million on hand, new FEC reports show. 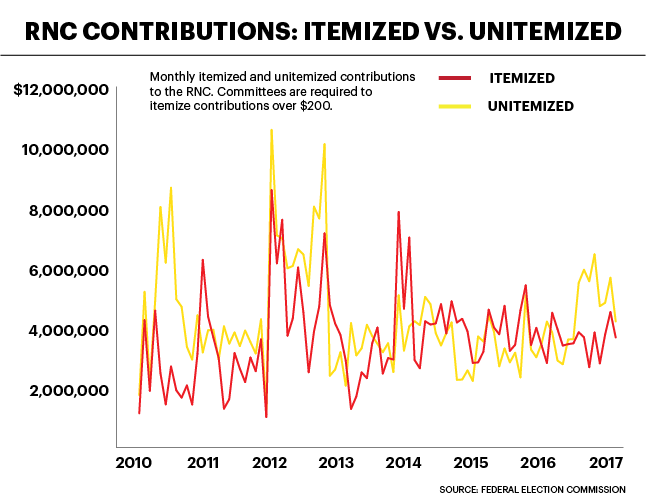 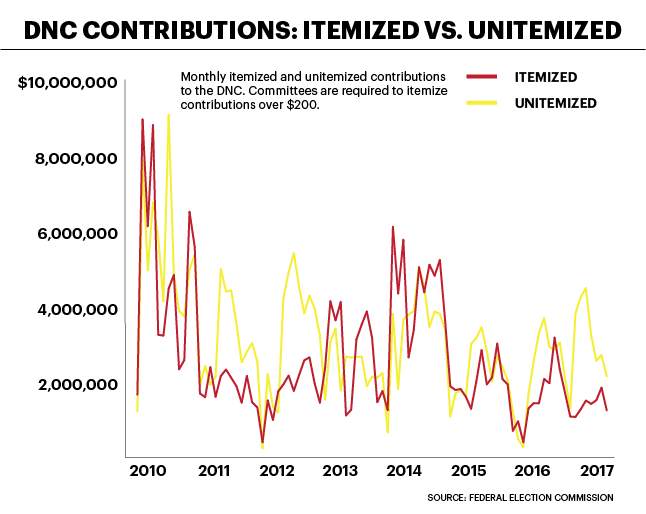 The RNC’s edge over the DNC has not trickled down to either party’s congressional committees. The DCCC has raised $81.4 million this year, more than the National Republican Congressional Committee’s (NRCC) $72.6 million. (The NRCC maintains a cash on hand advantage of $8.6 million.) 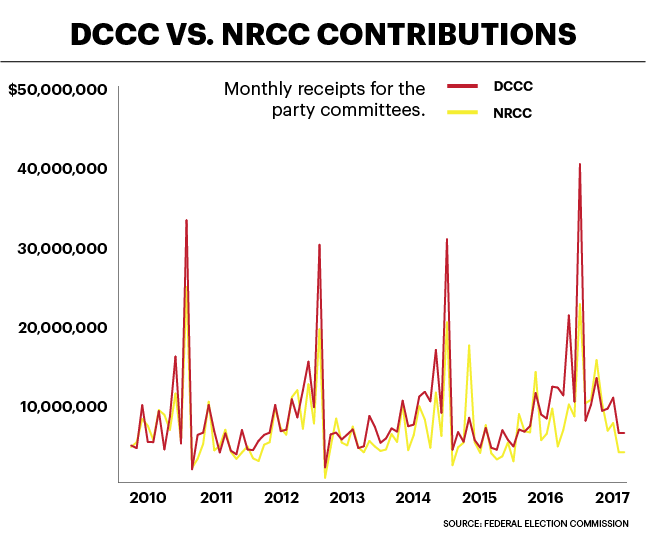 The Democratic Senatorial Campaign Committee has outraised the National Republican Senatorial Committee by a margin of about $4 million since January. 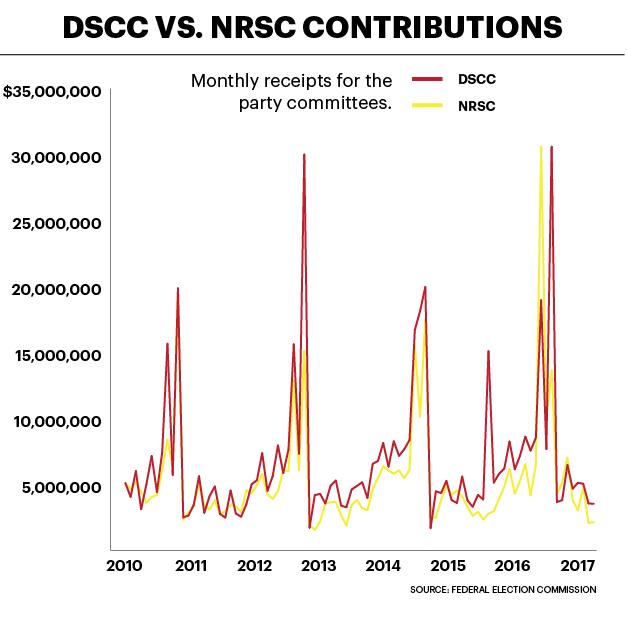 All told, the three Republican committees have about $97 million in the bank. The three Democratic committees ended September with about $54 million on hand.

Republican insiders say success has bred success, up and down the ballot.

It also helps when the face of the Republican Party, Trump, communicates so openly with his base of rabid fans. The RNC uses Trump’s tweets to channel his voice, soliciting contributions and messages of support when the president calls for building a wall along the border with Mexico or picks a fight with Senate Democrats. Those more personalized pitches, crafted in Trump’s voice, have spurred a wave of more than 300,000 first-time contributors.

“We don’t have to guess how the president would speak about an issue, because Americans hear directly from him on Twitter,” said Cassie Smedile, an RNC spokeswoman. “We can emulate his words and his voice when communicating with our supporters.”

One of the RNC’s most significant online fundraising campaigns this year has revolved around a petition to support building the border wall. Another was a birthday card from first lady Melania Trump to the president.

Some Democrats worry that the cash advantage will allow Republicans to begin advertising far earlier than their candidates can, effectively defining the candidates — and shaping races — in the GOP’s favor, even in a year that should favor Democrats.

“The DNC does need to get its act together,” said Martin Frost, a former Texas congressman who headed the DCCC while in office. “There is a real sense that we actually have a shot at the House even though the districts were drawn against us.”

While the RNC and the DNC typically reserve their money for presidential elections, both committees are spending this year in ways they hope will help up and down the ballot. The RNC in August hired 17 new state directors, who will be on the ground in battleground states during the midterm elections. The DNC has invested money in hopes of keeping Virginia’s governorship, and in a state Senate race in Washington State that could flip control of the chamber if Democrats win a special election.

“The building’s been smart about the way they’ve invested money,” Kaufman said of the RNC. “We invested more money in data and technology than ever before.”

DNC officials say their fundraising is on pace with previous off-year elections, and that they expect the House and Senate committees — which face crucial elections next year — to raise the bulk of the money. And many Democrats said an explosion of outside groups, from super PACs to labor unions, simply means there are more avenues for money to find its way into politics these days.

“I’m not overly worried because resources are flowing through so many different vehicles, which, taken as a whole, represents a great deal of potential,” said Hari Sevugan, a former DNC spokesman who now works as a Democratic strategist. “The fact that we have a number of well-resourced groups means we can work on different points of attack at the same time.”

For the moment, the top Republican super PACs maintain a cash edge over their Democratic counterparts too. The Senate Leadership Fund had $8 million on hand in the first week of September, compared with $4.5 million for the Democratic-aligned Senate Majority PAC, which last reported at the end of June. The Congressional Leadership Fund, the GOP’s House super PAC, had $3.5 million in the bank at the beginning of July, versus $1.4 million for the Democratic-backing House Majority PAC.