Two of President Trump’s hometown newspapers are hitting him for standing by Alabama GOP Senate candidate Roy Moore in the wake of explosive sexual misconduct allegations.

In nearly matching front-page headlines on Friday, the New York Post and the New York Daily News — both known for their punchy style — declared Trump as “with” a “perv” in the Alabama Senate race.

“I’m With The Perv!” the New York Post declared in bold letters.

“I’m With Perv,” the Daily News wrote alongside photos of Trump and Moore. 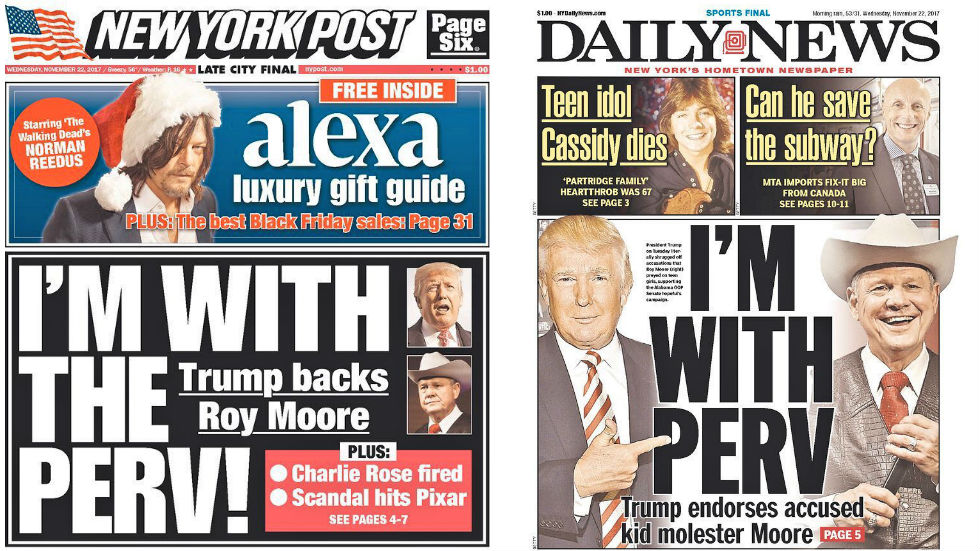 {mosads}Numerous women have come forward in recent weeks to accuse Moore of pursuing sexual and romantic relations with them when they were teenagers and he was in his 30s. One of the accusers was 14 years old at the time of an alleged encounter with Moore, who was 32 at the time.

Moore has vehemently denied most of the allegations and has resisted calls by dozens of GOP officials across the country to withdraw from the Senate race.

After days of remaining relatively silent on the matter, Trump defended Moore on Tuesday, emphasizing the candidate’s denial of the allegations and saying that “we don’t need a liberal person” in the Senate, referring to Moore’s Democratic opponent, Doug Jones.

Jones has seen a boost in public polls since the allegations against Moore surfaced, turning a race long considered safe for the GOP into a competitive showdown. The Alabama special election is set for Dec. 12.

Fetterman fires back at Tucker Carlson over tattoo insults

Majority of Democrats want candidate other than Biden in 2024: poll