CORONADO, Calif. — After years of strong gains in states across the country, Republicans now fear they stand to lose hundreds of state legislative seats in next year’s midterm elections if there is a significant voter backlash against President Trump.

Any losses would come at the worst time: Just ahead of the redistricting process that begins with the 2020 census.

{mosads}In interviews at a conference of state legislative leaders here, Republican legislators tasked with defending their majorities were uniformly worried that their party is headed for losses.

They blamed a variety of factors, including a tumultuous political environment, their party’s past success winning in Democrat-leaning territory and Trump’s dismal approval ratings.

“I think President Trump’s favorability ratings, I’ve got to be honest about it, they’re certainly not helpful,” said Robin Vos, the Republican Speaker of the Wisconsin Assembly. “If it were up to me, I would try to have him showcase more of the good things that he is doing as opposed to picking arguments with whoever it would be. I don’t think that’s helpful to me as an elected official.”

Others said it is up to congressional Republicans to notch legislative victories to prove the GOP can handle the responsibility of governing. 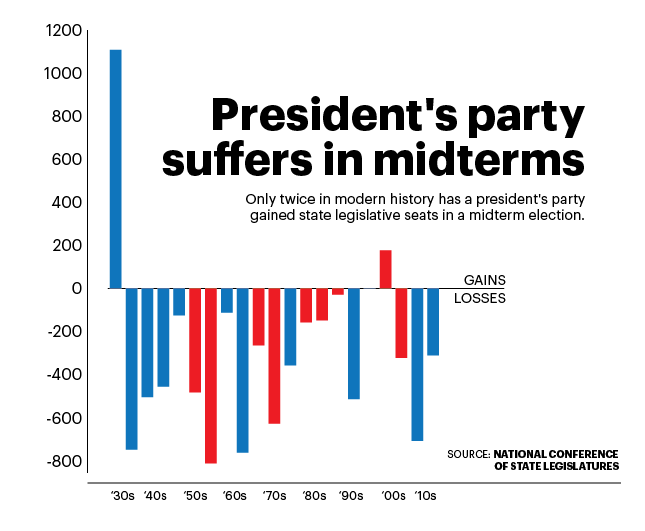 A president’s party has picked up legislative seats in a midterm only once since the Great Depression: in 2002, just more than a year after the Sept. 11 terrorist attacks, when President George W. Bush was riding high in the polls. Republicans gained a net of 177 seats.

A deeply unpopular president can hurt his party deeply at the legislative level.

Trump’s approval rating is mired in the mid-30s, well below any of his predecessors.

“People use midterm elections to stick it to the executive,” said Thad Kousser, a political scientist at the University of California, San Diego who studies state legislative politics. “Trump is the touchstone of American politics. You can’t vote against him in 2018, but you can vote against his party.”

Republicans took note of last month’s elections in Virginia, where Democrats performed far better than either side expected, spurred by a wave of suburban support.

Democrats now hold at least 48 seats in Virginia’s 100-member House of Delegates, up from 34 seats before Election Day, with recounts pending in four Republican-held seats. Those Democratic gains, some Republican leaders worried, came because liberal-leaning outside groups had spent unprecedented amounts of money.

“The spending over the course of the year, and particularly in the November elections, by liberal and progressive interests have shattered their records at the state level,” said Matt Walter, who heads the Republican State Leadership Committee. “And that has captured everybody’s attention.”

“If Republicans cannot get their act together in Congress, there will be a trickle-down effect on our states,” said David Long (R), the president pro tem of the Indiana state Senate.

Next year’s elections take on a special meaning because of the upcoming redistricting process.

Democrats felt the sting of steep legislative losses in the 2010 midterm elections, when Republicans picked up 708 Democrat-held seats — almost 10 percent of the 7,383 state legislative seats across the country.

Because legislatures in many states are responsible for crafting new maps, newly Republican-dominated legislatures were able to craft districts that helped the party solidify its control of the U.S. House of Representatives for the remainder of the decade.

“This is the first serious table-setting election for 2021 redistricting,” said Tim Storey, a legislative elections expert at the National Conference of State Legislatures. “No doubt that [Democrats] will gain seats, and maybe a few chambers.”

Democrats start in a deep hole. The party controls just 31 of the nation’s 98 partisan legislative chambers. Republicans control both chambers in 33 states, while Democrats own both chambers in just 15 states. That means Democrats will have to spend resources to win back seats that should, by most measures, already be in their column.

A handful of those majorities, on both sides, teeter on a knife’s edge. Republicans own slim majorities of just one seat in the Colorado, Maine and Minnesota state senates; two seats in the Virginia state Senate; and four seats in the Arizona and New Hampshire state senates. The Democratic Legislative Campaign Committee said it will target state House chambers in Minnesota, Michigan and Iowa, as well as the Florida state Senate.

Republicans are likely to invest heavily in Washington, Nevada and New Mexico, all states where Democrats narrowly control both chambers, and in Alaska, where a cross-party coalition controls the state House. And both parties will contest Colorado, where Republicans hold the state Senate and Democrats run the House.

“A panic about a wave is not in line with the facts of data,” Walter said. “There are enough signs out there to indicate that, if you have the right candidate and they have sufficient resources to push back, you have a good chance in the overwhelming majority of places of maintaining, and you also have the opportunity to grow.”

Despite Trump’s low approval ratings, Republicans hope they get credit for an improving economy and tax reform they say will put more money in middle-class pockets.

“I think nationwide Republicans will probably have losses,” Wisconsin’s Vos said. “My hope is the economy and the increasing growth that families are seeing in their own pocketbooks will mitigate those numbers.”

GOP House hopeful: Calling US a banana republic ‘an insult to Banana Republics across the country’