Share Tweet
More
Share
Twitter
Facebook
LinkedIn
Whatsapp
Email
Super PACs funded by some of the nation’s richest people are pouring tens of millions of dollars into the midterm elections, outpacing even the party committees that were once the biggest spenders in the field.
The 10 largest outside groups not tied to a particular candidate have already spent more than $150 million on so-called independent expenditures, money that pays for advertising on television or online, paid canvassers, polling research or mailers.
By contrast, the Democratic and Republican congressional and senatorial campaign committees — traditionally the largest players in the outside spending space — have spent a combined $57 million on independent expenditures so far this year.

Those numbers will grow as Election Day approaches, but the prominent role by outside groups technically unaffiliated with political parties highlights a significant evolution in American politics.
The big spending by outside groups that are not authorized by any particular candidate has grown exponentially in recent years, after the Supreme Court ruled in 2010, in Citizens United v. Federal Election Commission (FEC), that the First Amendment prohibited restrictions on some spending by corporations and labor unions.
Since that ruling, and several FEC advisory opinions that followed which clarified how those spenders could weigh in on politics, groups dedicated to spending millions of dollars for or against one party’s candidates have flourished.
“Organizations have emerged and matured, donors have become more savvy and selective, creating an ever-growing ensemble of organizations on the right and the left that are injecting more revenue into the political discourse,” said Brian Walsh, a Republican strategist who runs America First Policies, a group that backs up President Trump’s agenda.
Walsh formerly ran the Congressional Leadership Fund, which has become one of the juggernauts in outside spending.
The group, which has close ties to House Speaker Paul Ryan (R-Wis.), raised about $10 million in its first two election cycles. In 2016, it raised and spent $50 million. This year, so far, the group has raised more than $100 million.
For comparison, the National Republican Congressional Committee (NRCC) — traditionally the main outside group that raises and spends on behalf of Republican candidates — had raised about $144 million as of the end of July, the last time the committee had to report its fundraising hauls.
The Congressional Leadership Fund has spent $30.8 million boosting Republican candidates to date. The NRCC has spent $19.5 million.
Though the two groups share a common goal of electing more Republicans, they have different responsibilities by nature.
As a party committee, the NRCC is legally allowed — and virtually obligated — to spend a certain amount of money in coordination with candidates’ campaigns. They also have a department that aids members of the House Republican Conference in raising their own money, infrastructure that is not free.
As an independent group, the Congressional Leadership Fund shoulders none of those responsibilities. The modern independent group tends to have far fewer staffers and much more spartan office space than party committees, all in hopes of keeping costs down.
This year, an explosion of outside groups have begun pouring money into political races. An incredible 64 groups have already spent more than $1 million on campaigns, according to Political MoneyLine, which tracks campaign spending.
Those spenders range from well-known groups like the National Rifle Association and the American Federation of State, County and Municipal Employees to new pop-ups with names like 35th Inc., which backs West Virginia Senate candidate Patrick Morrisey (R), and Patients for Affordable Drugs Action, which has run ads supporting Sen. Claire McCaskill (D-Mo.) and Rep. David McKinley (R-W.Va.) and opposing Sen. Tom Carper (D-Del.) and Rep. Anna Eshoo (D-Calif.).
Another 120 groups have spent at least $100,000 on campaigns this year. In the next seven weeks, typically the heaviest-spending period in any election cycle, many of those groups will cross the million-dollar threshold.
The single biggest spender to date is the Senate Majority PAC, a group with ties to Senate Democratic leadership. The PAC has spent more than $41 million on advertising so far, a little more than two-thirds of its overall spending. The PAC had raised $78 million by the end of July, only $14 million short of what it raised during the entire 2016 cycle. 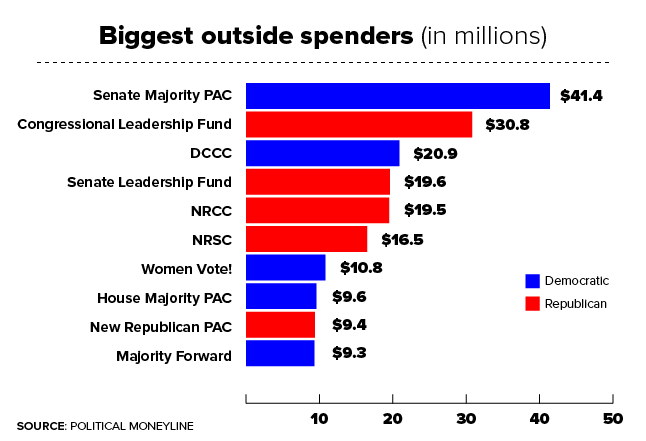 J.B. Poersch, the strategist who runs the Senate Majority PAC, said donors see a chance to invest in a Democratic majority, even though the Senate contests up this year would seem to favor Republicans.
“The fact that there are as many close races in a map that’s as hard says that what we’re doing matters and Democrats are in a position to win,” Poersch said.
The Congressional Leadership Fund is the second-largest spender, at a little over $30 million. The Democratic Congressional Campaign Committee is the largest party committee spender, and the third-largest spender overall, at $20.9 million.
Though party leaders initially hesitated to embrace the free-spending super PAC after the Citizens United decision, there is little hesitation now.
Walsh, the Republican strategist, said that acceptance is evident in the groups that sprouted up to defend or promote one specific candidate, like Priorities USA backing former President Obama or Restore Our Future backing Mitt Romney.
And congressional leaders now routinely appear at fundraisers for big outside groups, though they cannot technically be in the room when donors are asked for money that exceeds what they could legally give to a federal campaign.
Walsh and Poersch are signs of the evolving acceptance of outside groups: Walsh is a former top official at the NRCC, and Poersch ran the Democratic Senatorial Campaign Committee for three cycles.
The outside spending, the bulk of which is aimed at attacking a rival candidate, can be freeing to the candidate who benefits. Walsh said he has seen campaigns spend more of their money on positive advertisements or advertisements that directly contrast two candidates, rather than strictly on negative messages that are now left to the outside groups.
“Candidates are better at positive anyway,” he said.
This year, groups have spent more than $185 million on U.S. Senate races, and another $171 million on House races.
McCaskill and her rival, Attorney General Josh Hawley (R), have been the biggest targets; outside groups have spent more than $27 million in Missouri.
Senate races in Wisconsin, Florida and West Virginia have all attracted more than $18 million in spending. Contests in Montana, Nevada and Indiana have seen $13 million in outside spending, and the race for an open seat in Arizona has cost outside groups more than $11 million.
It is unlikely that either the Supreme Court or Congress will take steps to rein in outside political spending, barring a scandal or crisis like those that led to the last major overhaul, known as McCain-Feingold.
The outside spending “has been moving like this for a long time,” Poersch said. “It’ll be hard for the genie to get back in the bottle.”
Tags Anna Eshoo Claire McCaskill David McKinley Donald Trump Mitt Romney Paul Ryan Tom Carper