Voters across the country are being deluged by an onslaught of television advertising as candidates and big-spending outside groups dump millions of dollars on a growing battleground that stretches from the North Maine Woods to the posh suburbs of San Diego.

The two sides and their outside allies have already spent or reserved nearly a half-billion dollars in television time in the fight over control of the House of Representatives, according to data compiled by several Democratic and Republican sources watching the media landscape.

This week alone, candidates and outside groups are spending more than $63 million on television airtime in 51 districts across the country.

The four outside groups spending the most on television advertising — the Democratic Congressional Campaign Committee (DCCC) and the House Majority PAC on the left, as well as the National Republican Congressional Committee (NRCC) and the Congressional Leadership Fund on the right — are spending more than $24 million on commercials in 46 districts.

“What’s happening right now is for the first time this cycle, we’re spending even with the Republicans,” said Charlie Kelly, who heads the House Majority PAC. “Democrats have been running even or have an advantage on the air in most of the top 25 or 30 competitive districts.” 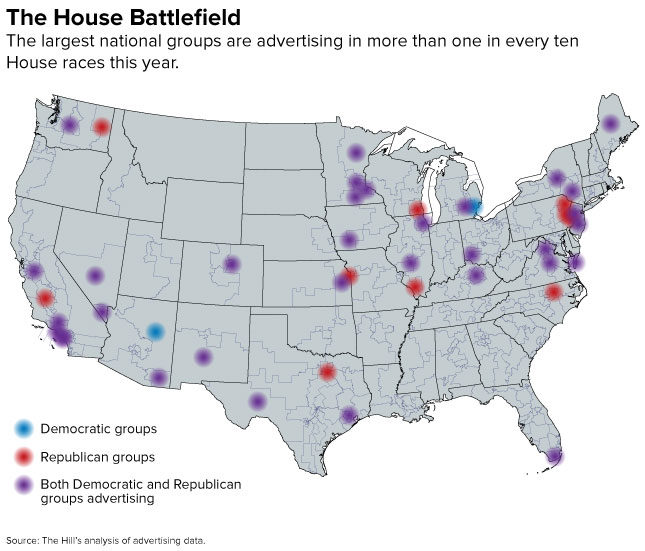 Democrats, who need to pick up a net of 23 Republican-held seats to reclaim the Speaker’s gavel, are on offense in the vast majority of those districts. Of the 32 districts where the DCCC is spending money this week, only five are held by a Democratic incumbent.

Democrats have expanded their advertising spending to some districts where the party has rarely competed in recent years, a sign that the party feels ambitious after public and private polling that shows President Trump is deeply unpopular and voters want Congress to act as a check.

“We knew all along that we wanted to build a massive battlefield, toward the goal of stretching the Republicans financially,” said Meredith Kelly, a DCCC spokeswoman. She said Democrats expected Republicans to have a spending edge, but “we wanted that advantage to be diluted in as many districts as possible.”

The DCCC is spending $307,000 this week in Kansas, where Rep. Lynn Jenkins (R) is retiring. They are spending a combined $400,000 in Michigan on seats held by Rep. Mike Bishop (R) and retiring Rep. Dave Trott (R). And the party is spending nearly a quarter-million dollars in a southern New Mexico district held by Rep. Steve Pearce (R), who is running for governor.

Democrats are also taking advantage of federal election law that allows the committee to spend a limited amount of money in coordination with candidates and their campaigns. The party is on air with coordinated ads in 17 districts ranging from California’s Central Valley and the Los Angeles area to south Florida. 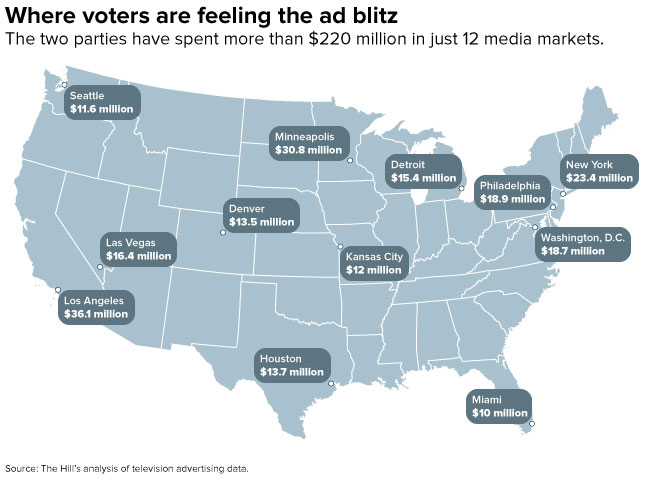 “First and foremost, we protect our members, and that’s reflected in our strategy. We’re a member-driven organization, and our first priority is that we do everything that we can on behalf of our members,” said Matt Gorman, an NRCC spokesman.

The NRCC is on offense in Minnesota, where Reps. Tim Walz (D) and Rick Nolan (D) both vacated rural House districts to run for state office, and in the northern Las Vegas district where former Reps. Cresent Hardy (R) and Steven Horsford (D) are both staging comeback bids. Republicans are also spending on seats being vacated by Pearce and Reps. Martha McSally (R-Ariz.) and Dave Reichert (R-Wash.).

But some of the most expensive races are still on both parties’ priorities list. In the Washington suburbs, Democrats are spending $603,000 against Rep. Barbara Comstock (R-Va.) this week. Republicans are spending $532,000, reflecting a race in which internal polls on both sides have the fight closer than public surveys that show state Sen. Jennifer Wexton (D) ahead.

The Congressional Leadership Fund (CLF), a super PAC that has collected more than $100 million in contributions this cycle, is spending $9 million of that haul this week alone, spread across 30 districts.

“CLF has been aggressive in defining Democratic candidates and putting them on defense, forcing them to respond and setting the terms of these races,” said Courtney Alexander, a spokeswoman for the group.

The House Majority PAC, the largest outside group boosting Democrats, has raised about half as much as its Republican counterpart. The Democratic group is spending $1.2 million in six districts this week, most of it in races the party did not see as potential targets earlier in the cycle.

“Our investments this cycle, we see opportunity in districts across the country, across the board,” Kelly said.

The two sides have spent the most on advertising, $36 million, in the Los Angeles media market, where Democrats see a chance to make inroads in Republican-held districts in Orange County and east of the city. Democrats and Republicans have spent more than $30 million in the Minneapolis market, and $23 million in New York, which also covers a handful of New Jersey-area seats.

NAACP calls for Supreme Court to ‘uphold the integrity’ of elections