Share Tweet
More
Share
Twitter
Facebook
LinkedIn
Whatsapp
Email
House Republicans struggling to preserve their majority are facing a wave of Democratic money and enthusiasm in suburban districts across the country, as well-educated and moderate voters consider new checks on President Trump.
An analysis of the types of districts in play shows that two-thirds of the Republican-held seats that a top election handicapper sees as vulnerable are in suburban areas.
{mosads} That has Republicans on defense in an area where Trump has bled support, even in the 2016 election he won.
The Cook Political Report lists 64 Republican-held seats as either pure toss-ups, or leaning slightly toward Democrats or Republicans. 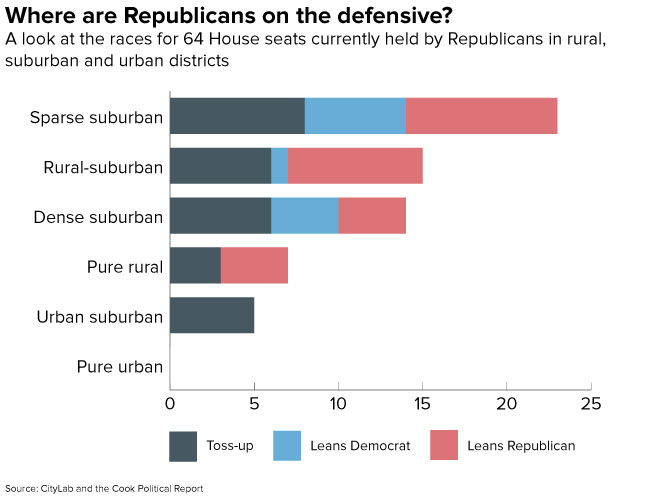 Of those districts, 42 are classified as suburban by the researchers David Montgomery and Richard Florida at CityLab.
“The suburbs are the battleground,” said Courtney Alexander, a spokeswoman for the Congressional Leadership Fund, the super PAC backing House Republicans.
“A lot of our advertising is focused in these districts, and we’ve been there in a lot of these districts for a year talking about the issues.”
Voters in suburban districts tend to be both wealthier and better educated than voters in either rural districts or in urban cores.
They are less moored to one political party or the other than either rural or urban residents, making them the last bucket of undecided voters who are capable of swinging an election.
In recent years, that has meant they have increasingly become the fulcrum on which the balance of power in American politics tips.
“There’s no place else that voters are really up for grabs in big groups,” said Lee Miringoff, director of the Marist Institute for Public Opinion.
In a sign of just how important defending the suburbs is to Republican odds of keeping the House, the Congressional Leadership Fund has stationed the vast majority of their field offices in those districts, in places like suburban Seattle, Chicago and Detroit.
Republicans depend on suburban districts for their House majority. A little more than a third of all House districts held by Republicans are classified as suburban, while 64 percent are in rural areas.
Two-thirds of the House Democratic Caucus represent districts that are partly or mostly suburban, a proportion that is likely to grow in the next Congress.
Democrats rely on rural areas for only 15 percent of their members, about the same percentage as those who represent urban cores in big cities. 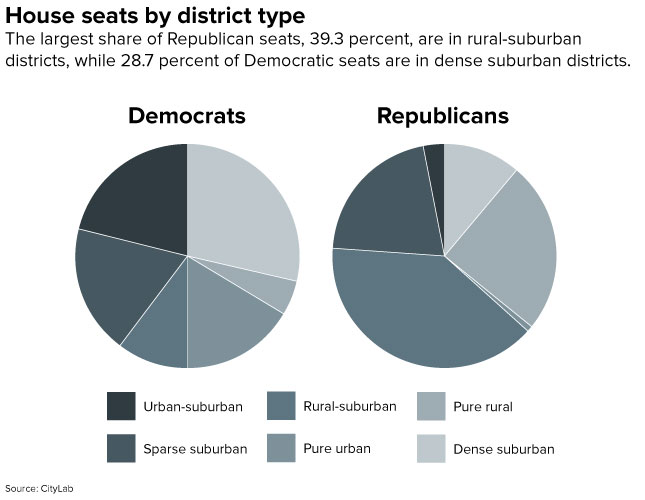 Neil Newhouse, a Republican pollster who co-directs the NBC News/Wall Street Journal poll through his firm Public Opinion Strategies, said what has put suburban voters up for grabs in recent years is an evolution of attitudes along educational lines.
Those with a college degree once favored Republicans over Democrats; today, the reverse is true.
“We’ll see that break pretty clearly in [2018] congressional races,” Newhouse said.
Newhouse pointed to the 2017 elections in Virginia’s House of Delegates, where Democrats won far more seats than anticipated, on the strength of their performance in suburban districts.
Trump has struggled in suburban areas, both when he won the White House in 2016 and during his tenure in office.
Trump’s under-performed Mitt Romney’s vote share in suburban districts by between 2.5 percentage points, in sparsely-populated suburban districts which tend to include many exurban communities, and 4.2 percentage points in suburban-dominated districts that include part of a major urban core, according to the CityLab data.
Trump did better among rural voters, who tend to be more conservative and who showed up in disproportionately high numbers in 2016.
Margie Omero, a Democratic pollster, said voters in suburban areas are less likely to be motivated by economic concerns, now that the recovery has stretched for more than a decade.
Instead, she said, those voters care about the deterioration in the American political dialogue.
“Voters are worried about the toxic partisanship that seems to be our new normal,” Omero said. “It’s likely been exacerbated by Trump’s election and his subsequent failure to bring people together, the way people expect a president to behave.”
Public polls show Trump’s approval rating is lower in suburban areas than it is in smaller cities and rural America.
A Marist Poll conducted for NPR last month showed Trump’s approval rating at 39 percent nationally, at 34 percent among suburban voters, and at 53 percent among rural voters.
That poll showed Democrats with a 12-point lead on the generic ballot, higher than more recent surveys.
But the Democratic edge among suburban voters was a whopping 22 percentage points, while Republicans held a seven-point edge among rural voters.
Tags 2018 midterms Donald Trump Mitt Romney suburban voters suburbs
Share Tweet
More
Share
Twitter
Facebook
LinkedIn
Whatsapp
Email

Fauci says he should have been ‘more careful’ on pandemic messaging: ‘No one’s perfect’

In hurricanes, more people die from indirect causes than the storms themselves