Democrats picked up more than 300 state legislative seats and more than a dozen prominent statewide elected offices around the country on Election Day, reclaiming some territory lost during Republican waves in the last two midterm elections.

But the Democratic gains were scattered throughout the country, an indication that, at the state level at least, the midterm elections represented more of a rising tide than a massive wave.

{mosads}Democrats regained control of seven state legislative chambers, including both the New Hampshire state House and Senate; state Senates in Colorado, Connecticut, New York and Maine; and the state House in Minnesota. Earlier this year, Democrats won control of the Washington state Senate in a special election.

“We have elected a new generation of inspiring leaders and we know that a new era of Democratic dominance is on the horizon,” said Jessica Post, who heads the Democratic Legislative Campaign Committee (DLCC). 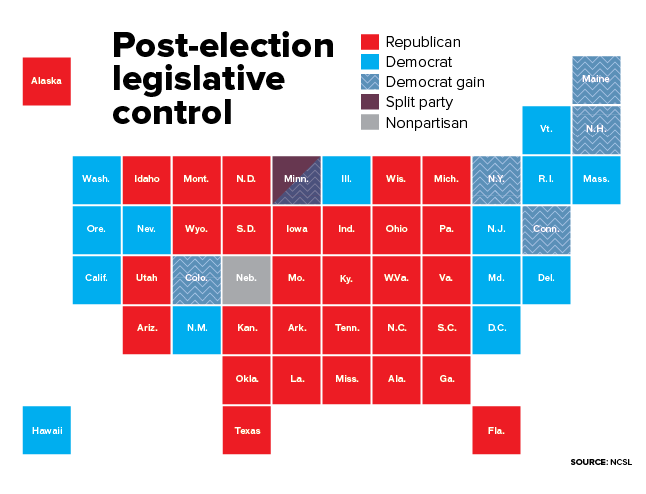 “People are paying attention for the first time in a long time. People are cognizant of the stakes at play,” said Liz Hanbidge, a Democrat who won a Republican-held state House seat in suburban Philadelphia.

But while Democrats running for Congress benefited from a national wave fueled by President Trump’s anemic approval rating, Democrats down the ballot could not ride the same swell.

In an average election, about 12 legislative chambers change hands between the parties, said Tim Storey, an elections expert at the National Conference of State Legislatures. Democrats lost 24 chambers in 2010, a particularly good year for Republicans, who did not control the White House.

“Democrats can certainly claim victory. They certainly won the game, but it wasn’t a banner year for Democrats. It was modest success,” Storey said.

Republicans will still control 61 of the 98 partisan state legislative chambers across the country. Prior to the 2010 elections, Republicans had held just 37 chambers.

“It was an underwhelming night for Democrats,” said David James, a spokesman for the Republican State Leadership Committee (RSLC), the largest outside group that backs Republican legislative candidates.

As in federal races, Democrats claimed the most success in suburban areas. The party picked up a big chunk of Republican-held seats in areas like Harris County and Dallas County, Texas, the Connecticut suburbs of New York City and the Phoenix metropolitan area.

“This is the closest we’ve been to a balanced House since 1966. That is stunning,” said Jennifer Pawlik, a teacher who won an Arizona state House seat formerly held by the term-limited Republican speaker of the House.

The results illustrate a partisan divide that has long infected Congress, and is now increasingly evident at the state level. Only one state — Minnesota — has a legislature in which Republicans control one chamber and Democrats the other.

At least 22 states will operate under Republican trifectas — when one party controls both chambers of the state legislature and the governorship. That number would rise to 23 if Georgia Secretary of State Brian Kemp (R) holds onto his lead in the race for governor. Fourteen states are completely under Democratic control.

“We’re real good at living together with people we like,” said Kelly Dietrich, who runs the National Democratic Training Committee, a group that prepares Democratic candidates to run for office. “We’re seeing those suburbs start to change.”

In a sign of just how much ground Democrats need to make up, the party celebrated gaining enough seats to deny Republicans a supermajority in three states. Republicans will no longer be able to unilaterally block Democratic filibusters in North Carolina, Pennsylvania and Michigan. Democrats won a special election last December to break the Republican supermajority in Georgia.

Democrats gained supermajorities in a handful of blue states, including California, Oregon, Illinois and Delaware. The party also controls a supermajority in the Nevada Assembly.

Democrats fielded a record number of candidates in the more than 6,000 legislative races decided Tuesday. Both Democrats and Republicans spent millions of dollars on state legislative races, shattering records across the country, a recognition that those officeholders wield outsize influence on the makeup of Congress through the decennial redistricting process.

The DLCC raised and spent more than $35 million on legislative races this year. Forward Majority, another major Democratic group, spent another $9 million. The RSLC spent at least $45 million.

The redistricting process will begin after the 2020 census. About one in eight legislators who won their seats on Tuesday — those who will serve four-year terms — will be around when the remap begins. And both Democrats and Republicans are already eyeing the 2020 elections, when the remainder of those who will control redistricting will be elected.

Poll: majority of Black voters think Biden should run in 2024

State of the Union live updates: Biden to appeal to GOP before a divided Congress

Graham under fire for voting for Biden judicial nominees