Republican candidates and campaign committees have spent more than $4 million at hotel, golf and vineyard properties that bear President Trump’s name since he was inaugurated in 2017.

More than three dozen members of Congress have held fundraisers or spent the night at Trump properties, according to a review of filings made with the Federal Election Commission (FEC) over the last two years.

More than a quarter of the money spent has come from Trump’s own campaign, which has paid his businesses nearly $1.5 million over that span, both for rent and for fundraisers.

{mosads}The Republican National Committee (RNC) has spent more than $1.1 million at Trump-branded properties in both Washington and Florida.

Watchdog groups have raised concerns over the propriety of Trump profiting off businesses as foreign governments and corporate interest groups currying favor in Washington book rooms at Trump hotels — including Trump’s hotel in Washington, D.C.

Attorneys general in Washington, D.C., and Maryland have sued the federal government, alleging the Trump International Hotel in Washington puts the president in violation of the Constitution’s Emoluments Clause.

There is nothing in the Constitution that bans a campaign from spending money at a company that benefits a candidate. But those good-government groups say the mixture of business and politics creates a combustible potion.

“The behavior itself is corrupting, and it’s creating corruption and the appearance of corruption,” said Meredith McGehee, the executive director of Issue One, a group that advocates for ethics in government.

The Trump campaign and the RNC said they did not see anything wrong with hosting events at Trump’s properties. Tim Murtaugh, a Trump campaign spokesman, said the campaign “pays market rates for venues and we report all expenditures as required by law to the FEC.”

RNC spokesman Michael Joyce said the party’s donors “enjoy visiting Trump properties, and have also pointed to the security, convenience, and price as factors” in the decision to hold formal RNC meetings at the hotels.

Republican spending at Trump-owned properties has ballooned since the president took office.

A review by Citizens for Responsibility and Ethics in Washington (CREW), a watchdog organization, found campaigns spent only $468,382 at Trump properties in the dozen years before he announced his run for president in 2015.

{mossecondads}“This isn’t a continuation of a trend. It’s not as though Trump properties were a draw for fundraisers in the past,” said Robert Maguire, CREW’s research director.

“Trump came into office presenting an unprecedented set of conflicts of interest stemming from his refusal to divest from his businesses. What this spending shows is that far from being a check on these conflicts of interest, his political allies embraced it and fueled it,” he added. “He’s actively trying to profit off of the presidency. 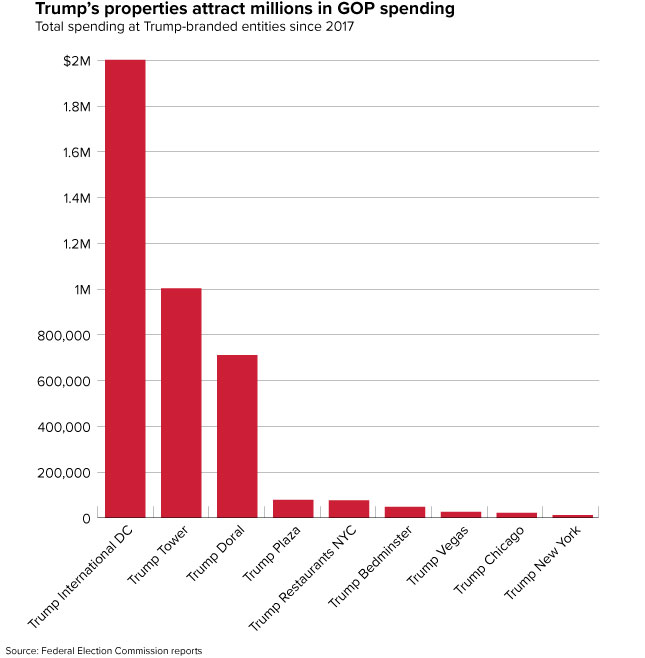 The Trump International Hotel in the Old Post Office has become a particularly hot property for Republicans raising money in Washington. Campaigns and party committees have spent more than $2 million at the hotel, according to FEC reports.

Trump’s public financial disclosure report shows that political groups accounted for at least 3.4 percent of the revenue taken in by Trump International Hotel, according to CREW.

The big spenders include America First Action, the super PAC that will back Trump’s reelection bid. Super PACs cannot work directly with campaign committees, but they can host fundraisers anywhere they like; America First Action has spent more than $450,000 at Trump properties since its inception.

“Trump Organization properties are world-class venues in destination locations that our supporters want to visit and are excited to attend events at,” said Brian Walsh, America First Action’s president. “The staff is always respectful, professional and provides best-in-class service.”

Walsh said he was not concerned that hosting events at Trump properties provided an appearance of impropriety.

A 21-page events menu reviewed by The Hill shows private breakfast events start at $42 per person, with a minimum of 25 guests — and an option to add an omelet station at $20 a head. Lunches begin at $60 per person, and multicourse plated dinners begin at $92 per person, before beverages.

Republican fundraisers said those prices are in line with other popular haunts around Washington, and the hotel requires a minimum charge of about $1,800 for a private space. The hotel adds something other venues cannot: The opportunity to rub elbows with top administration officials — and maybe even the president himself — who hang out in its bar and restaurant.

“For anyone looking to impress donors, that would be the perfect place to choose, especially for donors who are not from D.C. and appreciate the novelty of a capitalist president,” said one Republican fundraiser, who asked for anonymity to discuss the hotel.

Trump Tower in New York has pulled in more than $1 million in fees from political committees. The vast majority of those dollars come from the Trump campaign itself, which rents space there.

Trump National Doral also hosted the Republican Governors Association for a meeting in May 2017. The group, which is not required to file reports with the FEC, spent $412,000 to host its meeting. It signed a contract to host its event at Doral in February 2015, before Trump announced he would run.

Earlier presidents worked hard to mitigate even the appearance of impropriety. While in office, Jimmy Carter put his Georgia peanut farm in a blind trust. George W. Bush put his investments in a blind trust. Barack Obama did not even refinance his Chicago home while in office when interest rates dropped, for fear of the appearance that he would get a favorable rate not available to the public.

Trump has not taken the same approach. He declined to divest himself from his business, though he did hand day-to-day control to his sons Donald Jr. and Eric. 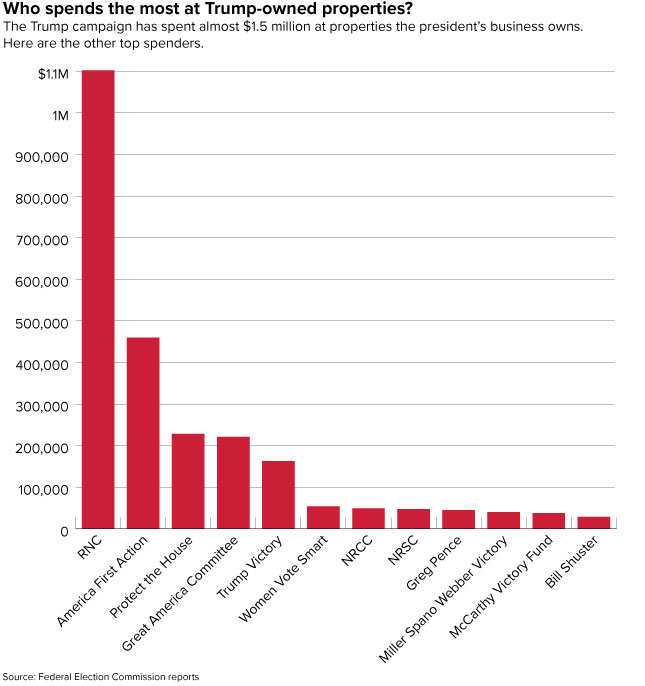 Several of the biggest spenders at Trump-branded properties share a top consultant, Maple Creek Consulting. The firm is registered to Samantha Menh, a Republican fundraiser who ran the Great America Committee, Vice President Pence’s political arm. The Great America Committee has spent more than $220,000 at Trump-branded properties; Pence attended nine events at Trump properties in 2018, according to CREW.

FEC reports show Menh also worked for Protect the House, a joint fundraising committee that split proceeds among House Republicans in 2018 and spent $228,000 at Trump properties. And Menh worked for Rep. Greg Pence (R-Ind.), the vice president’s brother, who won his seat in Congress in 2018.

Menh is now back in the Trump-Pence fold: In April, the Trump campaign announced she had been hired as director of vice presidential operations.

Greg Pence’s congressional campaign spent almost $45,000 at Trump properties in both 2018 and 2019, more than any other member of Congress. This year, Pence’s campaign paid for a reception at the hotel in early January, just as he was being sworn in to office. It also spent more than $4,400 in lodging expenses in February and March.

“The Trump Hotel is convenient and [the] level of service is great. We plan to do more events there in the future,” said Kyle Robertson, Pence’s campaign spokesman. Pence now has an apartment in Washington where he stays when Congress is in session.

Fewer campaigns and committees patronize Trump’s properties outside of Washington, New York and Florida. The National Republican Senatorial Committee and then-Rep. Tom MacArthur (R-N.J.) were among the few who spent money at Trump National Golf Club in Bedminster, N.J.

Trump properties have become go-to destinations even for Republican politicians who are not headed to fundraisers. CREW documented 53 senators and representatives, all Republicans, who attended events at Trump properties in 2018.

Some members of Congress have continued to patronize Trump properties even after they leave office. Beehive PAC, a political action committee controlled by former Rep. Jason Chaffetz (R-Utah), spent $2,881 for lodging at the Trump Hotel in Washington in December 2018 — 18 months after he left office, and four months after the PAC last reported it had given a contribution to a candidate.

Chaffetz did not respond to an email seeking comment.

McGehee, of Issue One, said the political atmosphere around Trump himself has squelched any serious oversight of candidate spending at Trump properties.

“Because the politics around President Trump are so polarized, those politicians who are choosing to go and spend money at Trump properties do so without fear that their constituents are going to hold them accountable because they’re in red states and red districts,” McGehee said. “Right now, the Republican base and the Trump base, in a Venn diagram, overlap significantly. Any questioning of this president’s activities has become a litmus test for how loyal you are as a Republican.”