Among 2020 Democrats who have worked in Congress, few have worked solo on meaningful legislation.

The Hill’s analysis of past legislative activity shows the vast majority of Democratic candidates who have served or still serve in the House and Senate have passed few pieces of legislation on their own.

In six years in the Senate, Sen. Elizabeth Warren (D-Mass.) has introduced more than 150 bills and dozens more amendments. More than a dozen of those measures are now the law of the land — but, in a reflection of the way Congress does business today, none of the bills that were signed actually carry her name as a chief sponsor.

Six other candidates — including Sen. Bernie Sanders (I-Vt.), who has served 28 years combined in the House and Senate — have managed to pass only one meaningful bill, not counting resolutions renaming Post Offices or honoring sports teams or local heroes.

But political scientists who study Congress say the thin legislative resumes are a reflection of the way the House and Senate function — or don’t function — today.

In a hyperpartisan atmosphere in which only the most essential legislation makes it through narrowly divided chambers, the vast majority of bills that reach a president’s desk are Christmas tree measures in which members add noncontroversial amendments to must-pass items.

“There are lots of ways that legislators can impact the legislative or policymaking process in ways that aren’t obvious. You can have a huge impact on a piece of legislation that gets completely folded into another piece of legislation by amendment or substitution,” said Jennifer Victor, a political scientist at George Mason University who studies Congress.

In recent history, legislative effectiveness has not proven decisive in choosing a party’s presidential nominee.

Then-Sen. Barack Obama (D-Ill.) beat out four senators who had accomplished far more than he to win the 2008 Democratic nomination. The senator who won the most delegates in the 2016 race for the Republican nomination, Ted Cruz (R-Texas), had fewer bills passed than an also-ran like Sen. Lindsey Graham (R-S.C.).

“A lot of it is the institution of Congress doesn’t really lend itself to an individual having a record to show off on. So much of it is collective and complicated and behind the scenes,” said Hans Noel, a government professor at Georgetown University.

Party leaders who run for president have had only limited success.

The last two party leaders to run for president, Newt Gingrich (R) in 2012 and Richard Gephardt (D) in 2004, both lost in their respective primaries.

Warren’s legislative record is illustrative of the way Congress works today. Of the 15 bills she has introduced that eventually became law, covering topics like combating the opioid epidemic or veterans’ education, all were folded into other bills with other lead sponsors.

Three measures Warren introduced — a gambling addiction prevention bill, a measure funding treatment for those who have suffered sexual trauma and a bill to streamline promotions in the National Guard — were all included in the 2019 National Defense Authorization Act, sponsored by then-House Armed Services Committee Chairman Mac Thornberry (R-Texas).

Members of Congress can also be effective in molding the shape of major legislation even if their name doesn’t appear on the final product.

“Unless you’re a relatively senior member of the majority party on a key committee or chair a committee, you’re not going to have a particularly notable legislative record,” said Lee Drutman, a senior fellow at the government reform think tank New America.

Two Democrats running for president stand out for their legislative achievements, one for his effectiveness in passing major pieces of legislation as a senior member of a majority party and one for her ability to pass measures in a bipartisan manner, even in the midst of divided government.

The first is former Vice President Joe Biden, who served 36 years in the Senate before leaving to join Obama’s administration. Biden authored 20 meaningful bills during his time in the Senate, and another 189 amendments that became law.

His final two years in office, when he chaired the Senate Foreign Relations Committee, were notably active: In those two years, seven Biden-authored bills were signed into law and he passed 70 amendments to other legislation.

The second is Sen. Amy Klobuchar (D-Minn.), who authored 13 significant pieces of legislation that have become law during her 12 years in office, including five bills signed by Trump. Those measures were less controversial, including bills to combat human trafficking, improve phone coverage in rural areas, and a $10 billion investment in water infrastructure that Trump signed last year.

“If you’re in the most left-leaning part of the Democratic Party, the bills you introduce are less likely to be subject to compromise down the road,” said William Galston, a senior fellow at the Brookings Institution and a onetime domestic policy adviser to former President Clinton.

“This is why I don’t think Klobuchar’s productivity is an accident: She typically begins from a place where compromise is conceivable.”

An analysis of data provided by Quorum, the legislative tracking firm, and by Congress itself shows Biden and Klobuchar have passed more bills and amendments per year of service — 5.8 for Biden, 3.8 for Klobuchar — than any of their rivals for the Democratic nomination.

Sanders comes in third despite the paucity of bills that bear his name. As the senior Democrat on the Senate Budget Committee and a former chairman of the Senate Veterans’ Affairs Committee, Sanders has become adept at passing amendments to key bills. He has authored 92 amendments during his 28 years in office.

By contrast, O’Rourke and Reps. Eric Swalwell (D-Calif.), Tim Ryan (D-Ohio) and Tulsi Gabbard (D-Hawaii) have achieved the lowest number of legislative accomplishments during their time in the House. All four averaged fewer than one bill or amendment passed per year of service.

Another measure of legislative acumen, the Legislative Effectiveness Score compiled by the nonpartisan Center for Effective Lawmaking, also shows Biden and Klobuchar at the top of the heap. The group uses 15 indicators, including bills introduced and committee hearings on those bills, to measure a lawmaker’s influence.

“The score that we put forward captures the degree to which a member of Congress is able to advance his or her agenda items through the process of making law. It weights more heavily pieces of legislation that moves further through the process,” said Craig Volden, a political scientist who co-directs the center. 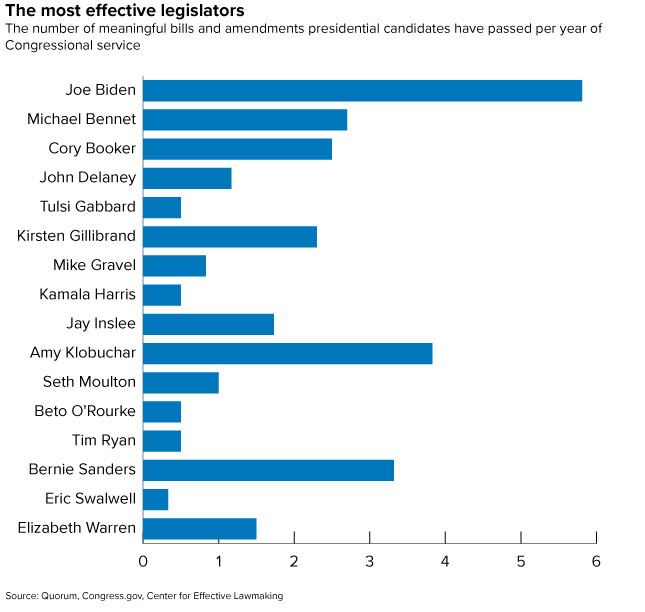 “It was quite a good last hurrah in his farewell term,” Volden said of the seven bills and 70 amendments Biden passed that year.

What happens next after Putin’s annexations in Ukraine