Biden, Harris get most speaking time at second debate

Share Tweet
More
Share
Twitter
Facebook
LinkedIn
Whatsapp
Email
Former Vice President Joe Biden and Sen. Kamala Harris (D-Calif.) spoke for the longest amount of time at the second of the two inaugural 2020 Democratic presidential primary debates on Thursday, capped by a heated exchange between the two over Biden’s record on racial issues.
Biden, situated at center stage as the race’s front-runner, spoke for 12 minutes and 53 seconds over the course of 18 answers to questions or follow-ups.
{mosads}Harris spoke fewer times, but when she did, she made the most of her hold on the mic. Harris spoke for a total of 11 minutes and 37 seconds, including three answers that spanned more than a minute and a half each, the three longest stretches that moderators allowed for any candidate over the course of both Wednesday and Thursday’s debates.
Sen. Bernie Sanders (I-Vt.) and South Bend, Ind., Mayor Pete Buttigieg (D) each spoke for more than ten minutes. 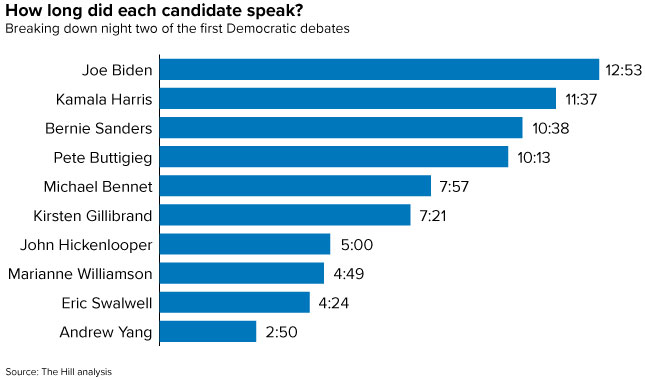 Tech entrepreneur Andrew Yang, who has tapped into a reservoir of support with his predilection for PowerPoint presentations, seemed lost under the high-powered lights. He spoke for just two minutes and 50 seconds, less than any other contender on stage for either of the two nights of debates.
Rep. Eric Swalwell (D-Calif.) and author Marianne Williamson each spoke for less than five minutes.
On Wednesday, only one candidate — Washington Gov. Jay Inslee (D) — got fewer than five minutes of face time.
Sanders, situated to Biden’s right as the second highest polling candidate on stage, got to answer as many questions as Biden. But many of the questions directed to the Vermont senator were follow-ups, and he talked for a shorter amount of time on average when moderators threw questions his way.
Sanders spoke for an average of 38 seconds each time he faced a question, shorter than every candidate except Swalwell. Harris had the longest average talk time, at a minute and 13 seconds each — capped by one follow-up question, for which she was allotted 30 seconds, in which she spoke for a minute and 45 seconds.
That follow-up was in the midst of a blistering critique Harris leveled against Biden for his past opposition to federal mandates for school busing. Harris attacked Biden’s record by telling the story of her own experience of taking the bus to a mostly white school in her hometown, an attack her campaign quickly elevated with a school-aged photo of the California senator. The moment was one of the most widely discussed online during the debate.
Thursday’s debate, a livelier affair than Wednesday’s relatively mundane exchange of ideas, gave far more time to the front-running candidates than the first debate. Biden spoke more than four times longer than did Yang; by contrast, the most verbose talker on Wednesdays’s stage, Sen. Cory Booker (D-N.J.), spoke for a little more than twice as long as Inslee did.
Tags Andrew Yang Bernie Sanders Cory Booker Eric Swalwell Jay Inslee Joe Biden Marianne Williamson Pete Buttigieg
Share Tweet
More
Share
Twitter
Facebook
LinkedIn
Whatsapp
Email

Trump calls for principals to be elected by students’ parents