Share Tweet
More
Share
Twitter
Facebook
LinkedIn
Whatsapp
Email
Voters in one of the most economically and socially diverse districts in the country head to the polls Tuesday to elect a new member of Congress in a high-stakes contest that will offer a tantalizing hint about the state of the political landscape a year before the presidential election.
Both parties have poured millions into the race to represent North Carolina’s 9th District, a sprawling melange of urban, suburban and rural enclaves from the core of wealthy Charlotte to the more impoverished Cotton Belt.
{mosads}Through the end of the week, the two sides have spent more than $14 million on television, according to sources watching the advertising market.
For all that money, there is little clarity. Both sides agree that state Sen. Dan Bishop (R) and Dan McCready (D), a solar company executive and Iraq war veteran, are running neck and neck.
The district has been open since the beginning of the new Congress, when North Carolina officials vacated the 2018 results that showed pastor Mark Harris (R) beating McCready by fewer than a thousand votes.
The state nullified that result after an illegal ballot-harvesting scheme came to light. Harris, the beneficiary of the scheme, decided not to run again.
Past election results and voter registration statistics show a deeply divided district, wrought by political undercurrents at play across the rest of the country. 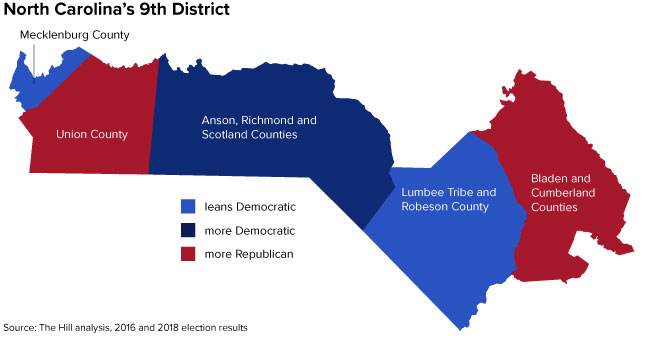 Wealthy urban and suburban voters who once favored Republican candidates are turning their backs on President Trump. Rural farmers who historically backed Democrats are now solidly in the Republican camp.
McCready’s campaign has spent most of its advertising dollars in the Charlotte media market, where he needs to replicate his overperformance in the 2018 race.
In Mecklenburg County, McCready won almost 54 percent of the vote in 2018, outperforming Hillary Clinton’s vote share there by 8 percentage points. McCready actually won more votes in Mecklenburg County than Clinton did — 49,200 to 46,700 — even though he ran in a midterm election year.
McCready won the urban precincts in Mecklenburg County by a 16-point margin. He narrowly carried the suburban precincts by a 3-point margin, an area where Clinton ran almost nine points behind President Trump.
But Bishop has an added advantage: He represents part of Mecklenburg County in the state Senate.
“The battle will be between Mecklenburg, with McCready’s established strength to Bishop’s state senate district, and Union, as to whether McCready can chip away at the 60-40 split from 2018, especially in precincts close to the Mecklenburg County line,” said Michael Bitzer, who chairs the political science department at Catawba College.
Bishop’s campaign will hope for strong turnout in neighboring Union County, full of poultry farms and precincts dominated by white voters. Trump took 64 percent of the vote in Union County in 2016, while Harris won with 59 percent there in 2018.
Farther east, Democrats have poured money into three rural counties where African American voters represent a significant portion of the population. Many of those voters did not turn out in the 2016 presidential contest, when Trump won Anson, Richmond and Scotland counties by a combined 11-point margin.
In 2018, McCready’s campaign got those voters to the polls — he won 3,000 more votes than did Clinton — and he won those counties by a combined 9 percentage points.
Bishop’s campaign has its own turnout machine revving up in Bladen and Cumberland counties, home of the other major city in the district, Fayetteville. Bishop’s campaign has spent a little more than a third of his advertising budget in the media market that covers Fayetteville and about half his budget in the Charlotte market.
President Trump plans a rally in Fayetteville on Bishop’s behalf the day before Tuesday’s special election, though some Republicans are worried that fallout from Hurricane Dorian, which has lashed eastern North Carolina, could threaten the rally. On Friday, the Trump campaign announced the president would appear at the Crown Expo Center rather than at the airport.
{mossecondads}The North Carolina Board of Elections on Friday ordered additional early voting hours in Bladen and Cumberland counties after Dorian, along with additional hours in Robeson and Scotland counties.
Farmland in Bladen and Cumberland is dominated by whites, historically Democratic voters who have turned sharply to the GOP in recent years. Trump and Harris both won about 62 percent of the vote in rural parts of those two counties, while Clinton and McCready won 58 percent and 57 percent in the urban Fayetteville precincts.
Perhaps the most consequential vote up for grabs on Tuesday comes in Robeson County, home of many members of the Lumbee Tribe and the most diverse county in the district. Just six of the 39 precincts in Robeson County are majority-white, and six are majority-African American. Sixteen precincts have Native American majorities.
The Lumbee have a long history of carving out their own political power in the state and of defending themselves when the need arises. In 1958, harassed by the Ku Klux Klan, the Lumbee fought off a rally of white supremacists who had gathered to threaten their residents.
“There is not a more conservative ethnic group than the Lumbee,” said Jim Blaine, a longtime North Carolina Republican strategist working for Bishop this year.
In 2016, President Trump won Robeson County with 56 percent of the vote. But two years later, McCready won 56 percent of the vote there — and more than 5,000 more raw votes than President Trump won.
This year, Democratic efforts to turn out voters in rural areas will prove crucial. In one early sign, turnout in Robeson County, especially, is growing among absentee voters, Bitzer said.
Tags Donald Trump Ed Pastor Hillary Clinton Mark Harris
Share Tweet
More
Share
Twitter
Facebook
LinkedIn
Whatsapp
Email