Sen. Elizabeth Warren’s presidential campaign is targeting Facebook’s policies for political advertisements with a new ad that purposefully makes the false claim that the company and its CEO, Mark Zuckerberg, have endorsed President Trump.

Warren and other critics have blasted Facebook in recent days over its refusal to take down a Trump campaign ad that accuses Democratic candidate Joe Biden of corruption without evidence. Facebook has defended allowing the ad to stay on its platform.

“Breaking news: Mark Zuckerberg and Facebook just endorsed Donald Trump for re-election,” the mock Warren ad states. “You’re probably shocked, and you might be thinking, ‘how could this possibly be true?’ Well, it’s not. (Sorry.)”{mosads}

“But what Zuckerberg *has* done is given Donald Trump free rein to lie on his platform — and then to pay Facebook gobs of money to push out their lies to American voters,” the ad continues.

“If Trump tries to lie in a TV ad, most networks will refuse to air it. But Facebook just cashes Trump’s checks,” the ad states. “Facebook already helped elect Donald Trump once. Now, they’re deliberately allowing a candidate to intentionally lie to the American people. It’s time to hold Mark Zuckerberg accountable.” 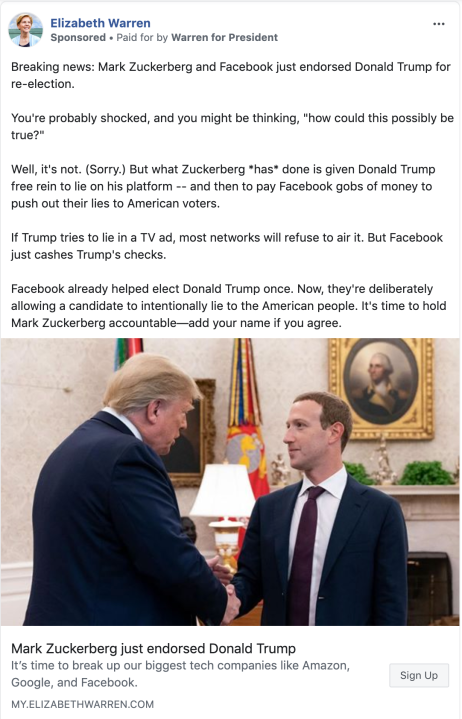 Asked about the Warren ad, a Facebook spokesperson told The Hill in a statement on Saturday that the company “believes political speech should be protected.”

“If Senator Warren wants to say things she knows to be untrue, we believe Facebook should not be in the position of censoring that speech,” the spokesperson said.

Warren on Saturday said in a series of tweets that she decided to see just how far Facebook’s “policy to allow politicians to run ads with known lies” goes.

“Facebook changed their ads policy to allow politicians to run ads with known lies—explicitly turning the platform into a disinformation-for-profit machine. This week, we decided to see just how far it goes,” she wrote.

“We intentionally made a Facebook ad with false claims and submitted it to Facebook’s ad platform to see if it’d be approved. It got approved quickly and the ad is now running on Facebook,” she added, posting an image of the advertisement.

“Facebook holds incredible power to affect elections and our national debate. They’ve decided to let political figures lie to you—even about Facebook itself—while their executives and their investors get even richer off the ads containing these lies,” Warren continued.

Facebook changed their ads policy to allow politicians to run ads with known lies—explicitly turning the platform into a disinformation-for-profit machine. This week, we decided to see just how far it goes.

Warren and others have criticized Facebook after the company said it would allow Trump’s reelection campaign to continue running the ad against Biden.

The Trump campaign’s post perpetuates an unsubstantiated allegation that the former vice president tried to fire a Ukrainian prosecutor because he had been investigating the company where Biden’s son served as a board member.

The U.S. and other Western countries had publicly pushed for the prosecutor to be dismissed amid criticism that the prosecutor was not pursuing corruption cases in the country, and Biden has denied that his efforts were connected to his son’s business interests.

Facebook in a letter obtained by The New York Times and CNN cited free expression as a reason for allowing the Trump campaign ad. Ads from politicians are also not subject to the platform’s third-party fact-checking program.

Warren tweeted about the social media platform’s decision this week, urging “transparency” from the company.

“Facebook already helped elect Donald Trump once. Now, they’re deliberately allowing a candidate to intentionally lie to the American people. This is a serious threat to our democracy,” she wrote. “We need transparency and accountability from Facebook.”

The Massachusetts senator, who has risen toward the top of polls in the crowded Democratic presidential race, has been critical of the company in the past and has been a vocal supporter of breaking it up.

Zuckerberg, meanwhile, said he would “fight” any efforts to break up his company, according to audio leaked by The Verge from an internal meeting.

He said he was not afraid of a “legal challenge” when asked about proposals from Warren and others to break up the firm.

“And does that still suck for us?” he added. “Yeah. I mean, I don’t want to have a major lawsuit against our own government.”