Key moments in the 2020 Democratic presidential race so far

More than two dozen Democrats launched presidential campaigns in 2019 — but just 15 remain in the race as the year comes to a close.

The race for the Democratic nomination has so far been marked by a fight between centrist candidates and those from the progressive camp over who is best suited to take on President Trump in 2020.

As Democrats across the country prepare to cast votes in primaries in 2020, here’s a look back at some of the year’s key moments of the early stages of the primary race:

June 27: Comes under attack from Sen. Kamala Harris (D-Calif.) during the second night of the first primary debate over his stance on racial busing.

August 2019: Becomes embroiled in the impeachment inquiry against Trump after a whistleblower complaint details a call in which the president pressed Ukrainian President Volodymyr Zelensky to investigate Biden and his son, Hunter Biden.

Feb. 19: Launches second race for the Democratic nomination after an unexpectedly strong, but unsuccessful, challenge against 2016 nominee Hillary Clinton.

Oct. 4: Suffers heart attack, reviving concerns about age for the 78-years-old candidate. He took a brief time off before returning to his campaign.

Feb. 9: Formally kicks off her campaign, going on to unveil a slew of progressive policy proposals that she turns into a campaign slogan: “Warren has a plan for that.”

Nov. 1: Releases her “Medicare for All plan” with details on cost after coming under heavy attack by opponents that she was not being transparent about a signature campaign issue.

Dec. 19: Clashes with rival South Bend, Ind., Mayor Pete Buttigieg at the sixth Democratic debate over fundraising after weeks of sniping between the two candidates.

April 13: Officially launches his campaign after unexpectedly gaining traction despite being the youngest candidate and less well known than some of the other front-runners. He also becomes the first openly gay major Democratic presidential candidate.

June 16: Buttigieg takes time off from his campaign to deal with a police-involved shooting of a black man in South Bend as his lack of support from minority voters continue to dog his campaign.

November: Several polls show a surge for Buttigieg in Iowa, bringing momentum to his campaign, though he remains fourth in most national polls.

Jan. 11: Officially launches her campaign, focusing on her foreign policy experience as a military combat veteran.

Oct. 18: Comes under attack from Hillary Clinton, who suggests that Gabbard is the “favorite of the Russians” to win the 2020 presidential election.

Dec. 18: Gabbard comes under fire from Democrats after voting “present” on the two articles of impeachment against Trump.

Feb. 1: Officially files for election. Booker launches his campaign a few months later in April, with a call for unity from Newark, the city that launched him to national stardom after serving as mayor for two terms.

December: Calls for lower criteria for primary debates after failing to make it to the event in December, saying the party needs more diverse voices represented on stage.

Nov. 6, 2017: Enters the field as a relative unknown, pushing a central campaign proposal: a universal basic income of $1,000 a month for every American adult.

Dec. 19: Becomes the only candidate of color and outsider to make the debate stage, signaling a campaign that has caught fire on the strength of his personality, viral momentum, grassroots enthusiasm and guerrilla marketing. 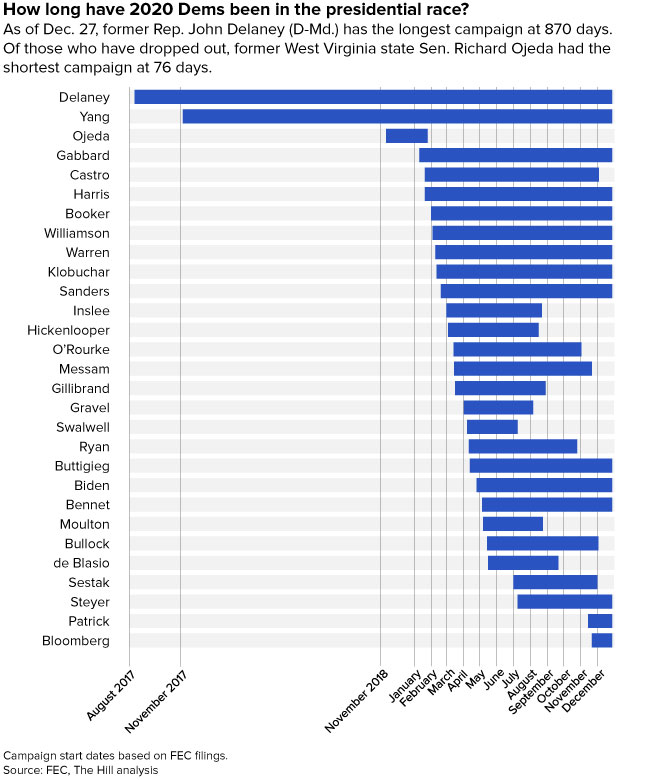 Nov. 21: Files an official statement of candidacy as part of a series of steps to officially launch his presidential campaign after citing concerns that none of the existing candidates can take on President Trump.

Nov. 22: Unveils a multi-million ad blitz as part of an unorthodox campaign that will see him skip the first few nominating states to focus on the Super Tuesday states, raising strong criticism from his Democratic rivals about his spending.

Feb. 11: Officially launches her campaign in the middle of a snow storm, calling herself a pragmatist and touting the work she’s done in the senate.

Dec. 19: Receives strong reviews over her debate performance, bringing renewed attention to her candidacy as she places most of her focus on the Iowa caucus.

Jan. 21: Launches campaign as one of highest-profile Latinos to ever run for president.

Nov. 10: Castro came out in support of replacing Iowa and New Hampshire as the first two voting states with others that are more diverse.

July 9: Launches campaign vowing to end corruption in the political system after making a name for himself as one of the leading proponents to impeach Trump.

May 5: Kicks off presidential campaign just months after a memorable speech on the Senate floor in January in which he tore into Sen. Ted Cruz (R-Texas) amid heightened tensions over the government shutdown.

Nov. 14: Launches campaign, vowing to unify the party among its centrist and progressive camps.

August 10, 2017: Becomes the earliest contender to launch their campaign, though he has struggled to gain traction since.

Feb. 4: Launches campaign as an outsider who has authored self-help books and was also previously known as Oprah Winfrey’s spiritual adviser.

14 candidates have dropped out of the race this year. Here are some of their most memorable moments.

June 27: Surges in polls and sees bump in fundraising after a strong performance in the first Democratic debate, where she faced-off with Biden, but her campaign falters and she eventually ends her campaign over a lack of funding.

August: Takes time off campaigning after a mass shooting in his home town of El Paso, drawing praise among Democrats for his call for more action on gun control, but is unable to overcome a series of missteps including a widely panned cover interview with Vanity Fair.

March 17: Gillibrand faced criticism as soon as she launched her campaign over her call in 2017 for Sen. Al Franken (D-Minn.) to resign after multiple women accused him of sexual misconduct.

May 14: Bullock pitches himself as a strong candidate to take on Trump, noting that he was the only candidate to win in a state-wide race in a state Trump carried in 2016, but his campaign failed to catch fire.

May 16: The New York City mayor’s race never gained traction despite leading one of the biggest cities in the world and boasting strong progressive credentials.

Aug. 21: Decides to seek reelection in Washington after making climate change the central focus of his presidential campaign.