Welcome to The Hill’s Campaign Report, your daily rundown on all the latest news in the 2020 presidential, Senate and House races. Did someone forward this to you? Click here to subscribe.

MANCHESTER, N.H. — Happy Primary Day! I’m coming to you from Manchester’s famous Airport Diner, a frequent spot for the candidates on the trail! 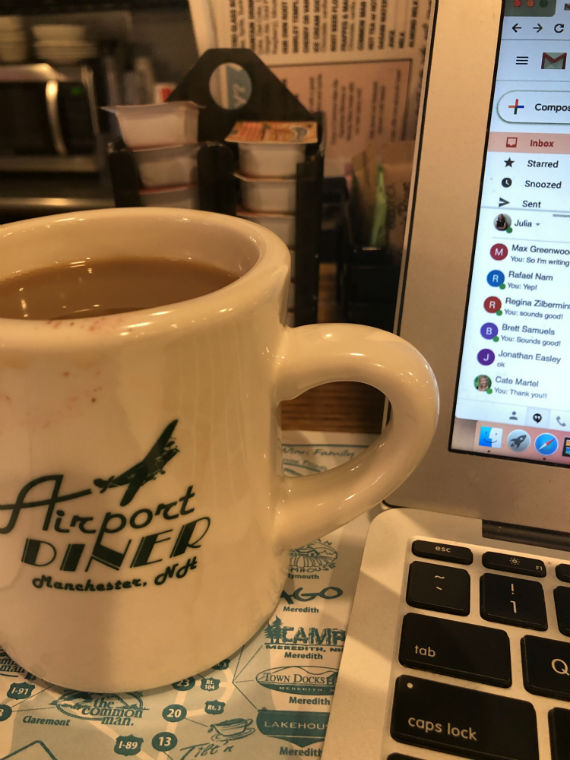 Voters have been making stops at their local polling places since this morning, while the candidates have also made their way to some precincts.

Today’s primary could prove to be make or break for a number of candidates. Sens. Sanders and Elizabeth Warren (D-Mass.) are competing on home turf, being two New England senators. Sanders is leading in a number of polls, and a win in the Granite State could give him the momentum he lost in the Iowa counting debacle going into Nevada and South Carolina. Warren, on the other hand has seen a decline in the polls, in New Hampshire and nationally. A less-than stellar performance in the state could cost her going into Nevada, South Carolina and the Super Tuesday states, when the field starts to solidify.

Buttigieg, who has acted like the victor coming out of Iowa despite the results irregularities, could also benefit from the momentum of a New Hampshire win. Buttigieg will likely have an uphill climb in more diverse states like South Carolina and Nevada, so he will really need to prove himself tonight. Sen. Amy Klobuchar (D-Minn.) is hoping for a Bill Clinton-style “comeback kid” moment in New Hampshire tonight. Recent polling out of the state shows her surging to third place behind Sanders and Buttigieg, but she still faces an uphill road ahead. Like Buttigieg, she could also have difficulty in the more diverse states ahead. And despite recent gains in fundraising, she is still far behind the other candidates.

That leaves us with Joe Biden, who had a less than stellar fourth place showing in Iowa and has polled poorly in New Hampshire. His events have been much more intimate than those of Sanders, Buttigieg and Klobuchar. He and his campaign appear to be taking note. He announced earlier today that he would not be attending his primary night rally in New Hampshire and would instead travel to South Carolina, where he has a broader support.

Your team on the ground has you covered tonight in the Granite State. Jonathan Easley will be at Sanders’s results party in Manchester, while Cate Martel will be at Klobuchar’s event in Concord. Yours truly will be on hand for Buttigieg’s party in Nashua.

ROADSIDE SUPPORT: A number of supporters came out to the polling place at Ledge Street Elementary School in Nashua. 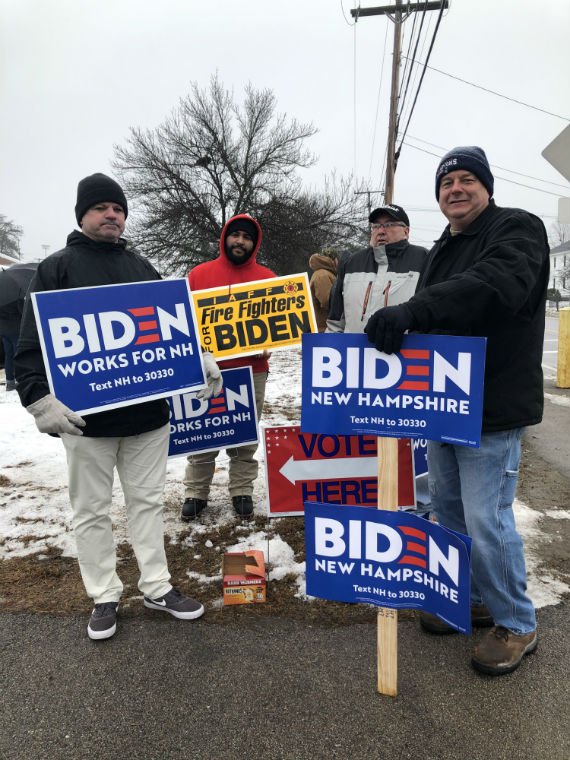 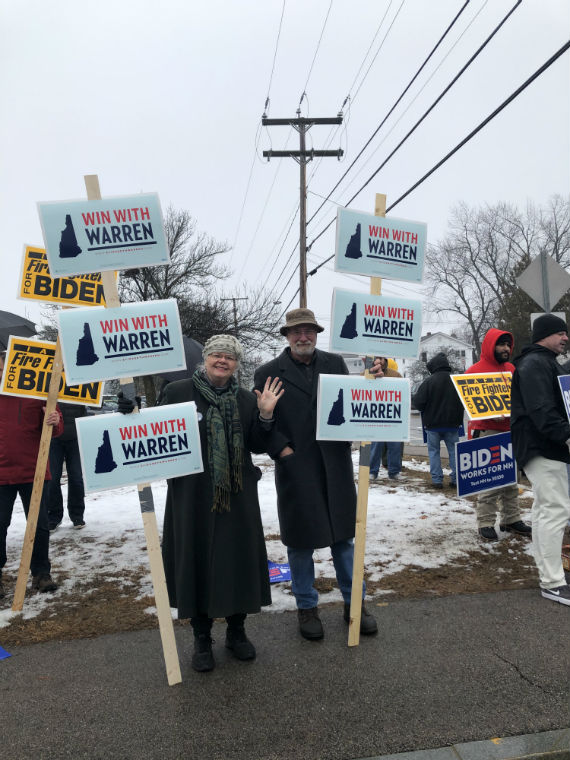 LIKE CLOCKWORK: President Trump rallied supporters in Manchester, N.H., on Monday night, offering a kind of counterprogramming to the Democratic campaign blitz that has overtaken the state ahead of the first-in-the-nation primary contest, Julia reports. In a speech, Trump took on the candidates vying to challenge him in the 2020 general election, asserting that “they’re all weak” opponents. He also seized on the chaos surrounding last week’s Iowa caucuses, suggesting without evidence that the Democratic Party was trying to rig the nominating contest against Sanders. “I think they’re trying to take it away from Bernie,” Trump said. “They’re doing it to you Bernie. They’re doing it to you again.”

BIDEN WORLD ON EDGE: Allies and aides to Biden are beginning to wonder whether the former vice president has a clear path to the Democratic nomination amid a worse-than-expected finish in Iowa and sinking political prospects in New Hampshire, The Hill’s Amie Parnes reports. That sense of doom has led some allies to question his chances in Nevada and even South Carolina, where he has worked for months to build up something of a firewall. Meanwhile, Sen. Sanders, Buttigieg and Bloomberg have surged in national polls, undercutting Biden’s claim that, despite his performance in Iowa, he’s still ahead nationally.

The former vice president decided to skip out on a primary night party in the Granite State to travel to South Carolina and headline an event alongside Rep. Cedric Richmond (D-La..),  .

BLOOMBERG UNDER FIRE: Bloomberg is defending his record on race relations and the stop-and-frisk policy used by New York City police during his tenure as mayor amid attacks from Trump and his campaign, The Hill’s Zack Budryk reports. Both the president and his campaign manager Brad Parscale highlighted an unearthed clip of the former mayor defending the policy, saying, “Ninety-five percent of your murders — murderers and murder victims — fit one M.O. You can just take the description, Xerox it and pass it out to all the cops. They are male, minorities, 16 to 25. That’s true in New York, it’s true in virtually every city.” In response, Bloomberg’s campaign issued a statement from the candidate himself: “President Trump’s deleted tweet is the latest example of his endless efforts to divide Americans. I inherited the police practice of stop-and-frisk, and as part of our effort to stop gun violence it was overused. By the time I left office, I cut it back by 95%, but I should’ve done it faster and sooner. I regret that and I have apologized — and I have taken responsibility for taking too long to understand the impact it had on Black and Latino communities.”

Brad Bannon: Nothing is set in stone in the Granite State

Liz Peek: New Hampshire could be a big win for Bloomberg

FROM CONGRESS AND THE STATES:

ARIZONA SENATE: Sen. Martha McSally (R-Ariz.) formally kicked off her 2020 Senate bid on Tuesday, The Hill’s Rebecca Klar reports. McSally is one of the most vulnerable senators facing voters this year. She lost her 2018 Senate race to Sen. Kyrsten Sinema (D-Ariz.) and only got her current seat after Arizona Gov. Doug Ducey (R) appointed her to replace the late Sen. John McCain (R-Ariz.). This year, she’s facing a strong challenge from retired astronaut Mark Kelly, the husband of former Rep. Gabrielle Giffords (D-Ariz.), who has repeatedly outraised her and leads in recent polls.

PONIES 4 ALL: Vermin Supreme is a mainstay of New Hampshire presidential primary politics, often making his pitch to give every American a pony if elected president.

Our own Cate Martel saw Supreme’s platform in action this week when he paid a visit to the DoubleTree in downtown Manchester where most of Washington’s media has gathered during the primary.

.@VerminSupreme and his supporters just swarmed the @DTManchesterNH lobby. Looks like his ponies weren’t allowed inside though. #nhpolitics #fitn pic.twitter.com/6gTsN58IjF

No, your eyes do not deceive you. Supreme paraded a pony around the hotel. Talk about keeping a campaign promise!

Our only question is who’s willing to pay for that?

If tonight is nothing like Iowa, we’ll see you with tomorrow’s primary results!

Alan Simpson says Cheney ‘not after Trump or hating Trump’