Texas voters head to the polls Tuesday to choose party nominees in a handful of critical districts in the fight for control of Congress in the 2020 elections.

The marquee fights on Tuesday will be for the delegates headed to the Democratic National Convention in Milwaukee this summer, and for the right to face Sen. John Cornyn (R) in November.

But down the ballot, Texas has rapidly supplanted California as the epicenter of the battle for the House of Representatives. Newly competitive seats and a handful of Republican retirements have made the Dallas and Houston suburbs and exurbs this year’s version of Orange County in 2018.

“There are going to be seats coming open to the Dems in most election cycles going forward. So it’s wise to begin to look closely and choose wisely where you’re going to invest in this cycle and the ones to come later,” said Cal Jillson, a political scientist at Southern Methodist University.

The Democratic Congressional Committee has opened an office in Austin, replicating their efforts south of Los Angeles two years ago.

After years of sky-high growth and demographic change, and at the end of a redistricting cycle in which urban and suburban areas have blossomed while more conservative rural regions shrank, Democrats made significant inroads in several Texas districts in the 2018 midterm elections.

“It’s not just changing demographics. Texas has become more urban,” said Mustafa Tameez, a Democratic strategist in Houston. “There’s a lot of energy on the Democratic side, and people can smell victory.”

But Republicans want those districts back — and Democrats plan to keep pushing for the seats in which they came up just short.

In a sign of just how enthusiastic members of both parties are about the presidential election year, dozens of candidates have filed to run for the most competitive seats. Those candidates will have to win a majority of the vote to avoid a May 26 runoff, and in several cases the fields are so crowded that a runoff is almost certain.

Six Republicans are fighting for the right to take on Rep. Lizzie Fletcher (D), who ousted a Republican incumbent in a suburban Houston district that Hillary Clinton won by just over a percentage point in 2016.

Republicans expect Wesley Hunt, an Iraq war veteran, to lead the GOP field; Hunt has lapped his rivals in fundraising and spending, though former Bellaire Mayor Cindy Siegel (R) has spent more than half a million dollars on her campaign.

In Dallas, Rep. Colin Allred (D) will face the winner of a five-way Republican primary. Businesswoman Genevieve Collins (R) leads the field, ahead of retired Navy SEAL Floyd McLendon (R), who may force Collins into a runoff. Clinton won the 32nd district by a two-point margin in 2016.

Democrats see their best opportunity to add to their House majority in a sprawling rural district that stretches from the El Paso suburbs all the way to San Antonio, a rural seat held by Rep. Will Hurd (R), who is retiring at the end of his current term.

Hurd won reelection in 2018 by just under 1,000 votes. His rival that year, Iraq war veteran Gina Ortiz Jones (D), is back for a second try. Nine Republicans are running, led by Burt Jones (R), a former civil servant, and Tony Gonzales, a retired Navy veteran who deployed to both Iraq and Afghanistan. Most Republicans expect Jones and Gonzales to head to a runoff.

Ortiz Jones “ran very well last time, came very close. That experience and that campaign infrastructure and the lack of an incumbent opponent puts her over the top,” Jillson said.

Democrats face a contested primary between Kim Olson and Candace Valenzuela, both former local school district officials, and Jan McDowell, the nominee against Marchant in both 2016 and 2018 who maintains good relations with district Democrats. Olson and Valenzuela appear headed to a runoff.

Two Democrats are also likely headed to a runoff in the 10th district, where Rep. Michael McCaul (R) held off attorney and civil rights activist Mike Siegel (D) by just five points two years ago. Siegel is likely to lead the Democratic field, but he could face a runoff against either Pritesh Gandhi, a physician, or Shannon Hutcheson, an attorney.

The party will almost certainly not face a runoff in the 21st district, in between San Antonio and Austin. Rep. Chip Roy (R) won his seat by a 2.5-percent margin in 2018, and this time he will face Wendy Davis (D), the former state senator who ran for governor in 2014. 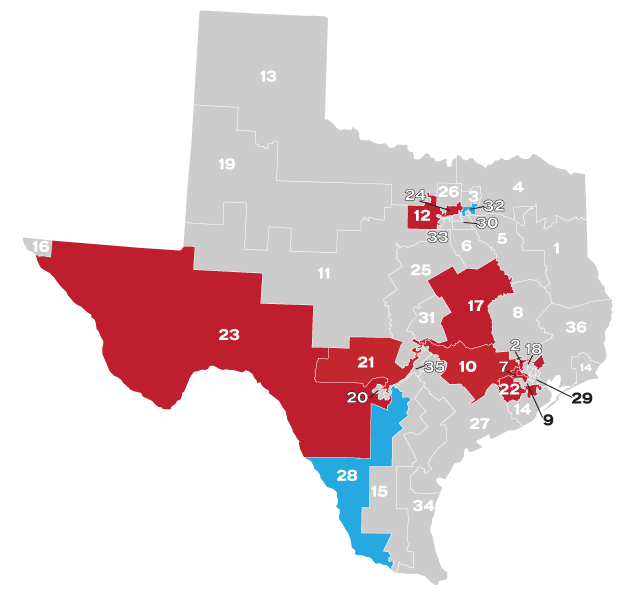 A wild field of 15 Republicans are hoping to succeed another Texas retiree, Rep. Pete Olson (R). Most Republicans believe a runoff will come down to two of three leading candidates: Kathaleen Wall (R), a businesswoman who ran for Congress in a nearby district in 2018; Troy Nehls, the Fort Bend County sheriff; and Pierce Bush, the grandson of former President George H.W. Bush.

Olson beat Sri Preston Kulkarni, a former foreign service officer, by just five points in 2018. Kulkarni is back for a second run in the Houston exurbs, where he has raised more than $1 million so far.

Many of the potentially competitive seats this year include women running strong campaigns for the Republican nomination. That is partly a recognition, Texas Republicans said, that Democrats won a huge number of red districts across the country in 2018 on the strength of women candidates.

“The Texas Republican Party and conservatives have really made an effort to train and recruit more women, and I think we’re starting to see the fruits of that,” said Nancy Bocskor, a Republican fundraiser and director of the Center for Women in Politics and Public Policy at Texas Woman’s University. “We have found if we can get a Republican woman through a primary, there’s going to be a greater chance that she can win in November.”

As the jockeying for potentially competitive seats mounts, two incumbents find themselves with more pressing challenges from within their own party.

In the suburban Dallas Metroplex, Rep. Kay Granger (R) faces a surprisingly aggressive challenge from Chris Putnam, a former Colleyville city council member whose campaign has benefitted from advertising from the conservative Club for Growth. Those ads have attacked Granger as a big spender who is insufficiently supportive of President Trump.

“The Tea Party has waned all over the country and in Texas, but those kind of candidates are still challenging incumbents,” Jillson said.

Granger won Trump’s endorsement in December, and she has vastly outspent Putnam. The Congressional Leadership Fund, the largest House Republican super PAC, has dropped more than $1.2 million into ads both backing Granger and attacking Putnam.

And in the Rio Grande Valley, an ideological fight is playing out on the other side of the aisle. Jessica Cisneros, an attorney and liberal activist, is mounting a significant fight against Rep. Henry Cuellar (D), who Cisneros says is too conservative.

The U.S. Chamber of Commerce, which has increasingly backed Republicans in recent years, has spent on Cuellar’s behalf, while liberal groups like the Justice Democrats are working for Cisneros. Cisneros has support from Rep. Alexandria Ocasio-Cortez (D-N.Y.) and presidential candidates including Sens. Elizabeth Warren (D-Mass.) and Bernie Sanders (I-Vt.).

“This is more than just a conservative Democrat versus a progressive Democrat. This extends to a younger generation versus an older generation,” said Ed Espinoza, a Cisneros backer who runs the liberal group Progress Texas.

Despite her big-name backers, most Democrats expect Cuellar to keep his seat.

Democrats face longer odds in a race against Rep. Dan Crenshaw (R) in Houston’s northern suburbs. Crenshaw, a freshman who won his seat by seven points in 2018, will likely face attorney Sima Ladjevardian, a self-funder who campaigned for former Rep. Beto O’Rourke (D) in his 2018 Senate contest.

President Trump won Crenshaw’s district by a nine-point margin in 2016, though that edge was significantly slimmer than the margins by which Mitt Romney and John McCain won the seat in 2012 and 2008.

One of the Republicans who lost his reelection bid in 2018 is trying to return to Washington, albeit in a different district. Former Rep. Pete Sessions (R) is one of a dozen Republicans who will appear on the ballot to replace retiring Rep. Bill Flores (R) in the 17th district, a seat Trump won by 17 points in 2016. Sessions has spent more than any candidate except George Hindman, a businessman who has run for office before.

Though the primaries have raged with the expected partisan vigor, Texas Republicans say they are aiming to show a calmer, gentler side to voters this year. The state legislative session in 2019 was not dominated by the sorts of culture war issues that have riven Austin in recent years, by design.

“There wasn’t a bathroom bill introduced,” Bocskor said. “They did some really strategic moves and made strategic decisions to not alienate suburban women. This isn’t the 100 percent ban on abortion like you’re seeing in other southern states.”

“This state is growing,” Bocskor said. “So let’s not purposely alienate the swing voter, and those are suburban moms.”

Campaign Report — Is Texas a lost cause for Democrats?

Mastriano in 2019: Women who have abortions after six weeks should be charged with murder