Sen. Bernie Sanders’s (I-Vt.) campaign manager Faiz Shakir on Tuesday retweeted a tweet from a top GOP staffer that highlighted former Vice President Joe Biden’s interaction with a construction worker, during which Biden said that the worker was “full of shit.”

The tweet, which has since been deleted, simply read “Oh no” and then featured a video of the interaction that was posted by Steve Guest, the GOP’s rapid response director. 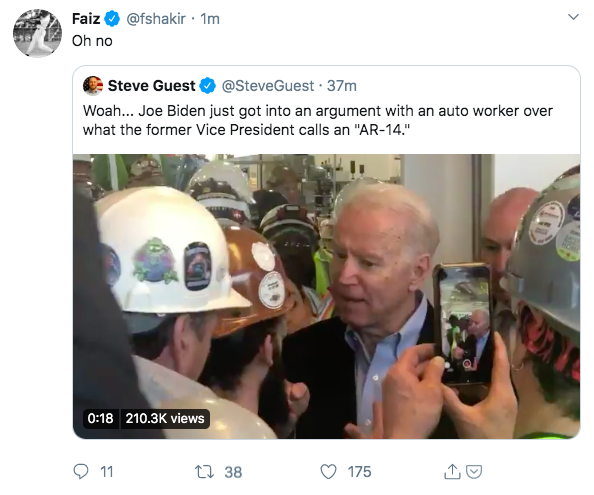 Before the tweet was deleted, it drew raised eyebrows from the Sanders campaign, political strategists and members of the media.

“It’s ironic that the Sanders campaign decided to announce their true colors in the winter of their campaign by siding with a GOP attack on gun policy,” Biden’s rapid response director Andrew Bates tweeted.
The Hill has reached out to the Sanders campaign for comment.
During the recorded interaction, Biden, who was touring an under-construction assembly plant for Fiat Chrysler and meeting members of the International Brotherhood of Electrical Workers, was accused by one of the workers of trying to take away his Second Amendment rights.
“You are actively trying to end our Second Amendment right and take away our guns,” the worker said to Biden, according to video captured by CBS reporter Bo Erickson.

WATCH: “You’re full of sh*t,” @JoeBiden tells a man who accused him of “actively trying to end our Second Amendment right.”

“I support the Second Amendment. The Second Amendment, just like —  right now, if you yelled ‘fire,’ that’s not free speech,” Biden responded. “And from the very beginning — I have a shotgun, I have a 20-gauge, a 12-gauge. My sons hunt. Guess what? You’re not allowed to own any weapon. I’m not taking your gun away at all.”
Rhetoric that Democrats want to take guns from everyday Americans has been a frequent talking point of the GOP.
Also during the exchange, Biden told the worker to stop being such a “horse’s ass” and incorrectly called the AR-15-style rifle the “AR-14,” which Guest’s tweet pointed out.
Gun safety and regulation is a topic that Sanders has received criticism for since the 2016 election cycle. In 1993, Sanders voted against the Brady Handgun Violence Prevention Act, which implemented federal background checks. Then in 2003 and 2005, Sanders voted for a bill — now law — that shields gun companies from lawsuits when their products are involved in a crime.
During his campaign this election cycle, Sanders has repeatedly vowed to take on the National Rifle Association (NRA), expand background checks and ban assault weapons, including the AR-15-style rifles.
Biden has often pointed to the fact that he helped pass the Brady Handgun Violence Prevention Act in 1993 when he was in the Senate. In 1994, Biden also helped pass The Violent Crime Control and Law Enforcement Act, which has since become controversial, but included a 10-year ban on the sale of assault weapons in the U.S.
All of this comes as voters in six more states will cast ballots in the Democratic presidential primary on Tuesday, with 352 pledged delegates at stake.
Many pundits see Michigan, with 125 delegates, as the state where Sanders must do well if he wants to remain competitive with Biden. Sanders pulled off an upset win against former Secretary of State Hillary Clinton in Michigan in 2016.
Biden currently leads Sanders in delegates after a strong showing last week on Super Tuesday.
Tags 2020 Democratic presidential primaries Bernie Sanders Donald Trump GOP Hillary Clinton Joe Biden Sanders campaign Second Amendment
Share Tweet
More
Share
Twitter
Facebook
LinkedIn
Whatsapp
Email

GOP shrugs off Kansas abortion vote — but it got their attention

Five takeaways on a super August Sunday for Senate Democrats