The nine biggest Democratic National Convention moments that got everyone talking

The Democratic National Convention concluded Thursday night with former Vice President Joe Biden formally accepting the Democratic nomination with the promise: “If you entrust me with the presidency, I will draw on the best of us, not the worst.”

His acceptance speech capped off four nights of speeches from high-profile politicians, performances from stars like Billie Eilish and John Legend, and testimonies from Americans calling for voters to support Biden’s campaign.

But outside the show-stopping speeches, musical performances and calls to action on climate change, gun violence and immigration, there were also surprising moments that sparked trending hashtags and viral conversations.

While they weren’t the most important moments from the convention, these are nine of the heartwarming, bizarre and standout moments that got everyone talking: 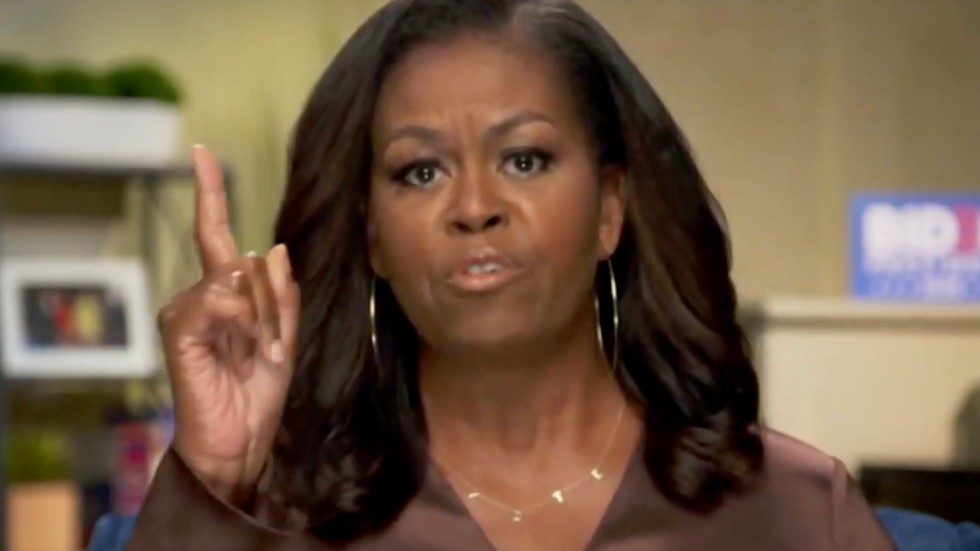 On Monday night, the first night of the convention, former first lady Michelle Obama drew widespread praise among Democrats for her passionate condemnation of President Trump and his handling of the coronavirus pandemic, saying he is “clearly in over his head” and “the wrong president for our country.”

But as she made the case for Biden to be the next president, she also sparked a viral conversation over the necklace she was wearing, which simply said: Vote.

I never imagined that something I’m so passionate about could mean so much to so many! The response has been incredible and I am beyond honored and humbled that @michelleobama wore my design. pic.twitter.com/rbkEZ7HUei

While Obama was still talking, the necklace, created by an independent, Black-owned business, started trending on Twitter, leading Footwear News to label it as “the must-have accessory of 2020.” 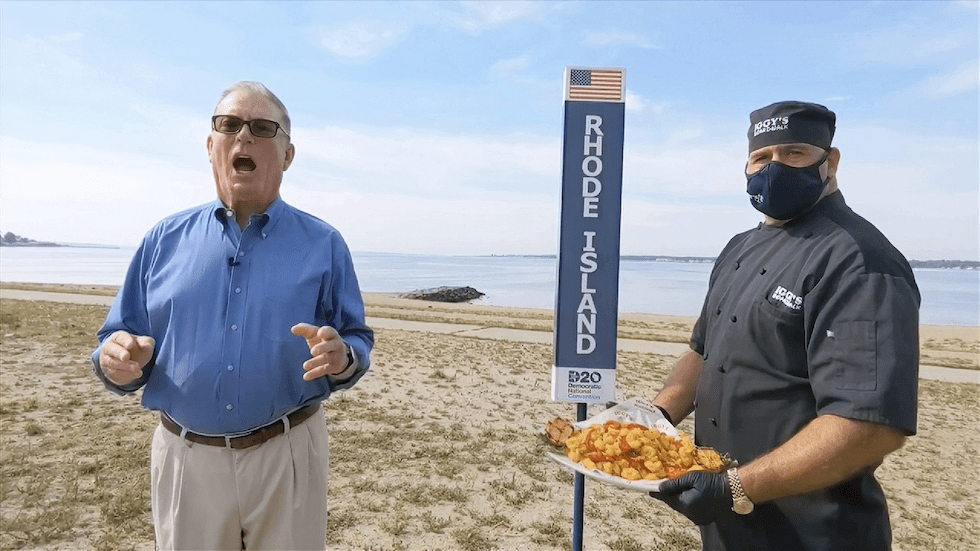 Rhode Island may be the smallest state in the U.S., but on the second night of the Democratic convention it sparked the biggest buzz.

As state residents issued passionate calls to fight racism, poverty, and other issues as they announced their delegate votes at the Democratic convention, Rhode Island referred to itself as “the calamari comeback state.”

“Rhode Island, the Ocean State, where our restaurant and fishing industry have been decimated by this pandemic, are lucky to have a governor, Gina Raimondo, whose program lets our fishermen sell their catches directly to the public and our state appetizer, calamari, is available in all 50 states,” Joseph McNamara, who chairs the state Democratic Party said in the 30-second bit.

“The calamari comeback state of Rhode Island casts one vote for Bernie Sanders and 34 votes for the next president, Joe Biden,” he added.

The “Calamari comeback state” of Rhode Island caught viewers’ attention during its turn on the #DemConvention roll call across America https://t.co/6tjma19Dq4 pic.twitter.com/4jp0thiAir

He brought calamari to the DNC. I AM SCREAMING. 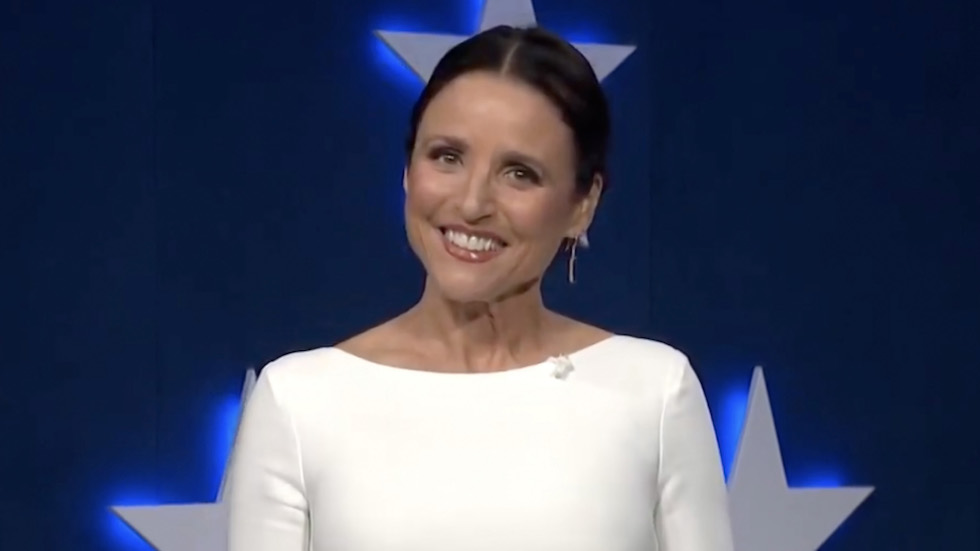 On Thursday night, former “Veep” star and comedian Julia Louis-Dreyfus cracked jokes and took jabs at Trump as she served as host of the convention’s final evening.

She talked about election meddling, mocked Trump and joked that a fifth convention night had been added just to play Michelle Obama’s speech on a loop.

Julia Louis-Dreyfus at the DNC: “If we all vote there is nothing Facebook, Fox News or Vladimir Putin can do to stop us.”

Julia Louis-Dreyfus jokes that a fifth night has been added to the Democratic National Convention schedule “where we will just play Michelle Obama’s speech on a loop.” https://t.co/U5BNlKo9R3 #DemConvention pic.twitter.com/Uh1teicK9b

Jill Biden’s intimate speech on unity and family draws praise, even from Republicans 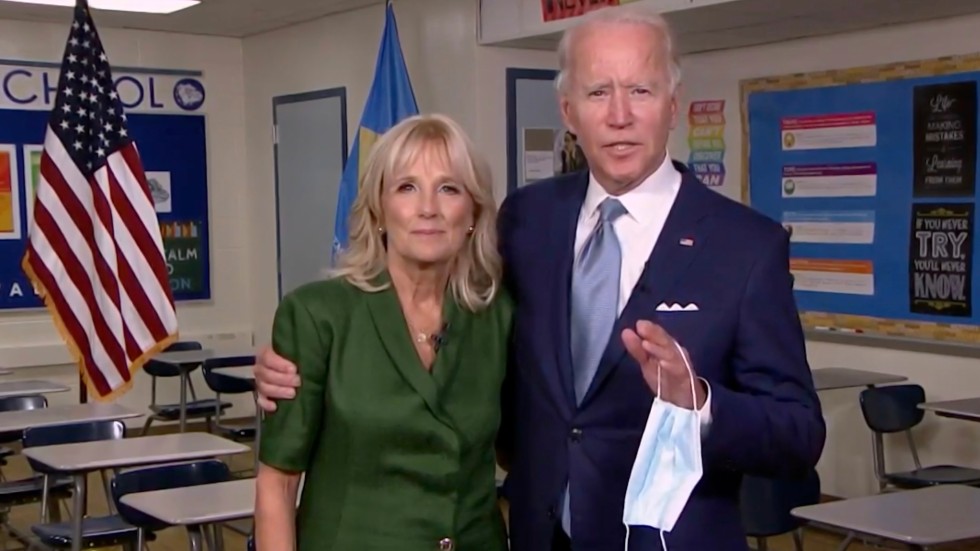 Dr. Jill Biden offered an intimate glimpse into her experience creating a blended family with Biden and his sons, Hunter and Beau, while laying out a plan to unite the country in her Tuesday night convention speech.

“We found that love holds a family together. Love makes us flexible and resilient. It allows us to become more than ourselves — together. And though it can’t protect us from the sorrows of life, it gives us refuge, a home,” she said in a speech discussing her family.

Her remarks were widely praised, even from across the aisle by Republicans like Sen. Lindsey Graham (S.C.) and Ben Shapiro.

Tonight, Jill Biden did a very good job representing herself and Joe in the causes they believe in.

She’s an outstanding person who has led a consequential life. 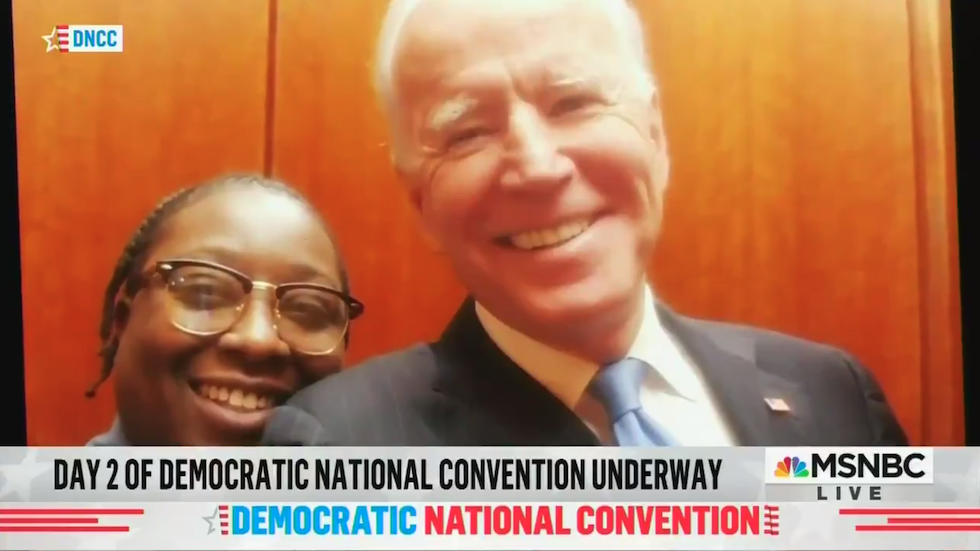 Earlier this year, New York Times security guard Jacquelyn Brittany, 31, went viral after she candidly met Biden in an elevator and told him, “I love you.”

On Tuesday, she formally nominated him to be president in what many called one of the most heartwarming moments of the evening.

Jacquelyn Brittany met @JoeBiden in an elevator as a security guard. Tonight, she nominated him to be president. Here’s the story: https://t.co/ECzADcBxZH pic.twitter.com/7BiL1VD9RL

In her initial moment with Biden, she was seen in a video excited to meet the former vice president.

“I love you. I do. You’re like my favorite,” Brittany can be heard saying in a video at the time. 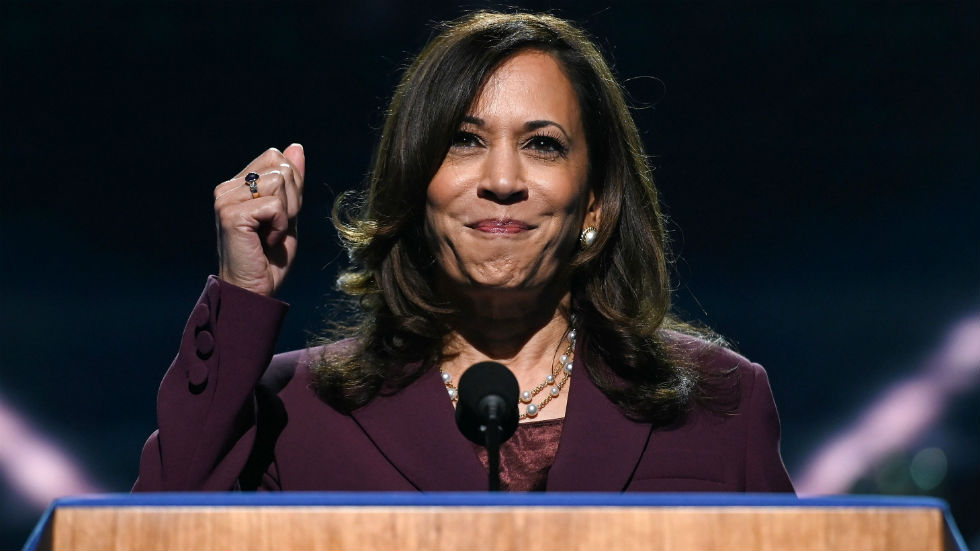 On night three of the Democratic convention, Sen. Kamala Harris (D-Calif.) became the first Black woman and first Indian American on a major party presidential ticket, with her speech including a focus on America’s diversity and calls to end racism.

Two moments that were quickly the talk of Twitter were her shoutout to her “chithis” a Tamil word for aunt, and her comment that “there is no vaccine for racism.”

Indian Americans celebrated hearing the use of Tamil as Harris spoke of the women and family members who empowered her in her life before and during politics.

Watching Kamala Harris speak with such pride about her South Indian mom, while I sit next to my Amma, and my nephew who calls me Chithi, is so special. https://t.co/hLMNKrBBte

I literally have tears in my eyes. @KamalaHarris just said “chithis” which means auntie. My heart is so full right now

Harris also drew viral praise for comments on racism as she discussed the disproportionate rate at which nonwhite people are infected with COVID-19, as they make up a large portion of essential workers.

Many activists have drawn attention to the issue as the Black Lives Matter movement has taken center stage after the police killing of George Floyd in Minneapolis during the coronavirus pandemic, and public officials point to inequalities that are tied to the infection rates.

Sen. Kamala Harris: “Let’s be clear — there is no vaccine for racism. We have got to do the work.” #DemConvention https://t.co/f4hSCWZoSM pic.twitter.com/tl5xj9Vf2H

“THERE IS NO VACCINE FOR RACISM”

The internet was very, very keen on learning more about JFK’s grandson 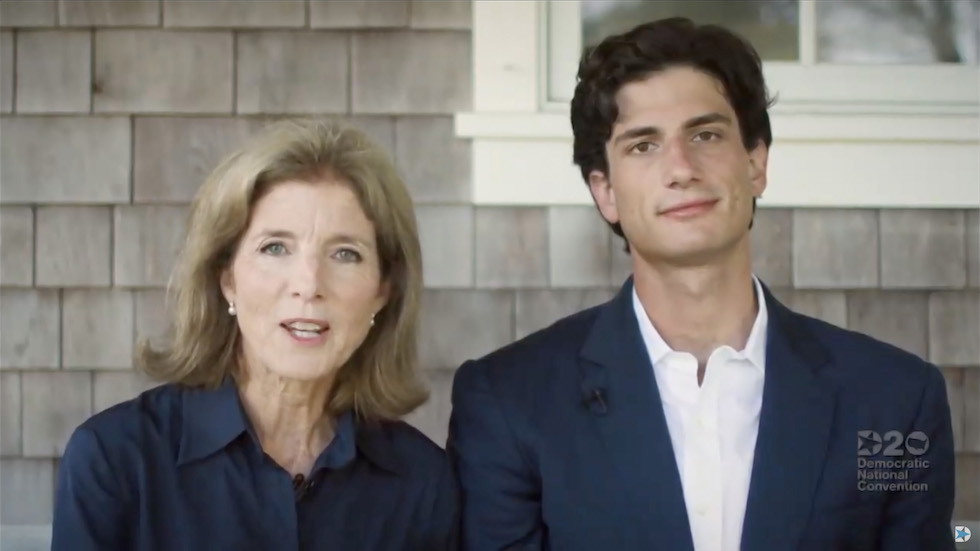 On Monday many people didn’t know the name, Jack Schlossberg. By Tuesday, curious internet users were googling his age and drooling over him online.

Schlossberg, the only grandson of President John F. Kennedy, appeared on the second night of the convention with his mother Caroline Kennedy to call on voters to elect Biden to the Oval Office.

But some may not have even heard the message, they quickly took to Twitter to comment on his resemblance to uncle John F. Kennedy Jr.

Jack Schlossberg HAS the right to be that fine pic.twitter.com/9cNchqjSK1

How many people just googled Jack Schlossberg’s age before sending that inappropriate text to their friends? #DemConvention #DemocraticConvention pic.twitter.com/PxIMuXfRIX

How Sen. Elizabeth Warren surrounded herself with easter eggs 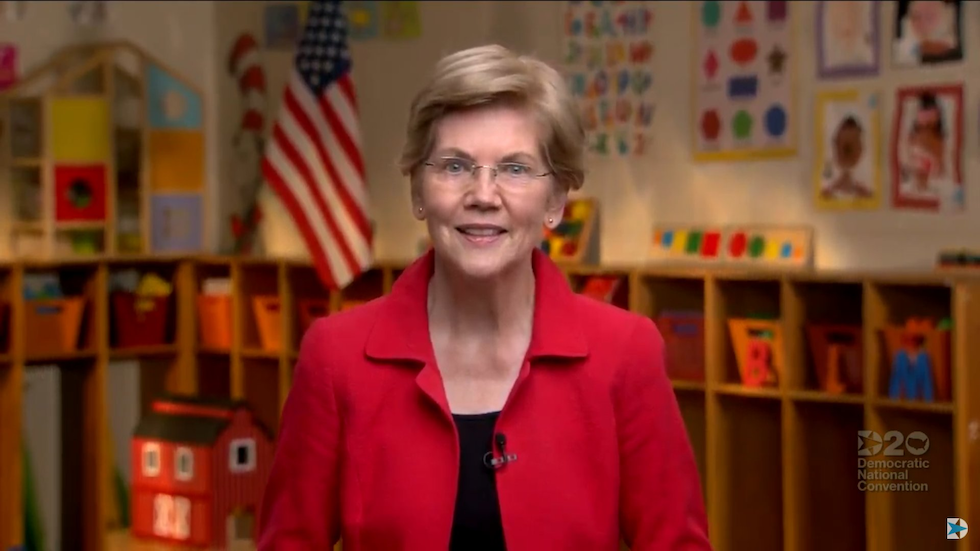 Warren’s convention address from a Massachusetts child care center forced to close due to coronavirus was full of hidden messages, which viewers quickly picked up on.

What appeared to be kids’ craft supplies were seen in the background spelling out “BLM” for “Black Lives Matter” as well as “DBFH,” which stood for her campaign slogan of “Dream big, fight hard.” Also spotted in the background was a child-sized Postal Service carrier uniform, a swipe at the agency’s funding crisis during the pandemic and ahead of an election where millions are expected to vote by mail.

Warren’s campaign pointed them out on Twitter, but many viewers tweeted about the hidden messages themselves.

Sarah Cooper does her viral Trump impression for special segment 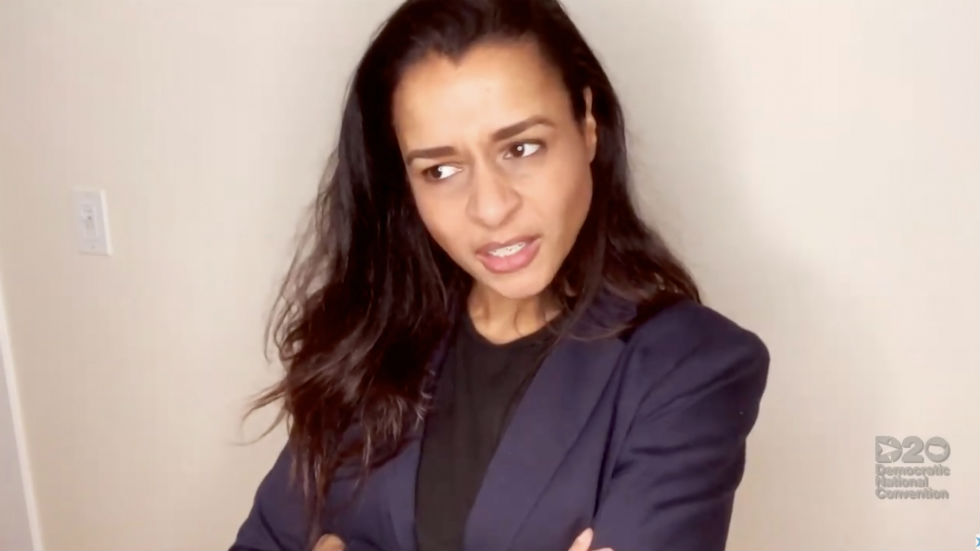 Comedian Sarah Cooper on the final night of the convention blasted Trump’s recent attacks on mail-in voting and called his comments “unhinged.”

Cooper, who is famous for her TikTok impressions lip-syncing Trump’s speeches and remarks, did a lip-sync on Thursday night of Trump’s mail-in voting comments.

Afterward, she spoke as herself explaining why she was supporting Biden.

Cooper quickly trended on Twitter, as thousands shared her impressions and expressed surprise that she was included in the convention.

“Donald Trump doesn’t want any of us to vote because he knows he can’t win fair and square.”

WATCH: Sarah Cooper appears at the #DemConvention, doing her signature Trump impression, then speaking “in my own words.” #DNC2020 pic.twitter.com/GyLWF6z29Y

Here are seven GOP primary winners who questioned the 2020 election

by Caroline Vakil 1 day ago
Campaign  /  1 day ago
Latino