WHAT YOU NEED TO KNOW TODAY

> New research warns pandemic could drag on for two years 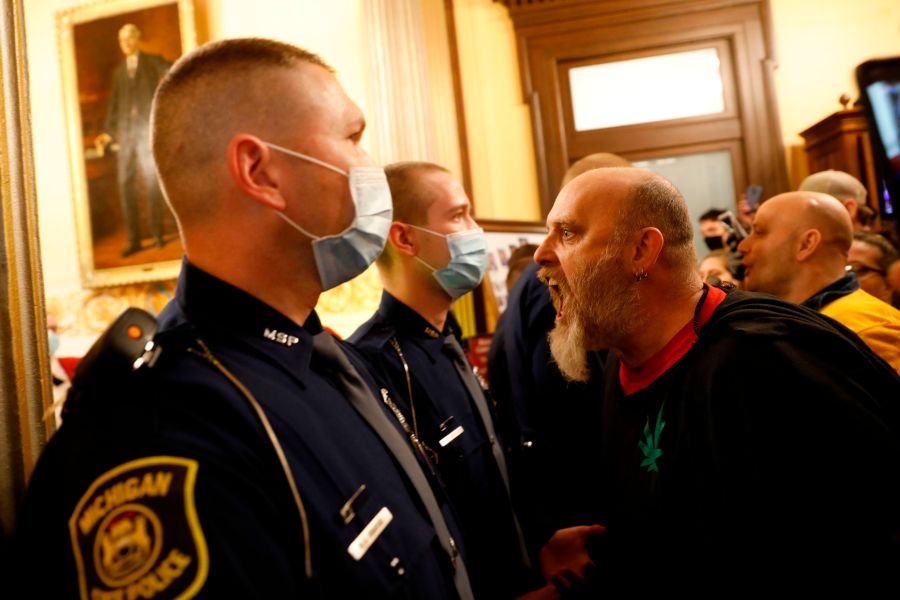 Is this what we’ve come to? Thursday was a remarkable day in Lansing, Mich., where armed demonstrators stormed the State Capitol to protest Gov. Gretchen Whitmer’s (D) stay-at-home order. Combine the armed protests with impassioned speeches by Republican lawmakers threatening to sue to challenge Whitmer’s power and you have outright political mayhem. In the face of the chaos, however, Whitmer refused to bend to pressure and took further executive actions which extended business closures and the state’s emergency declaration to May 28. This morning, President Trump is urging Whitmer to negotiate and “make a deal” with the protesters, tweeting, “The Governor of Michigan should give a little, and put out the fire. These are very good people, but they are angry. They want their lives back again, safely! See them, talk to them, make a deal.” But what kind of deal can be made when an unpredictable, vicious virus has the world on lockdown? In the end, it won’t be Trump, Whitmer or the protesters who usher in a return to normalcy — it will be the demise of the coronavirus.

Former Secretary of State Madeleine Albright discusses new book, ‘Hell and other Destinations;’ says Trump’s America First strategy is hurting the U.S. with a virus that knows no borders; when global collaboration is vital, states WHO needs fixing; and points out nations successfully dealing with COVID-19 are led by women 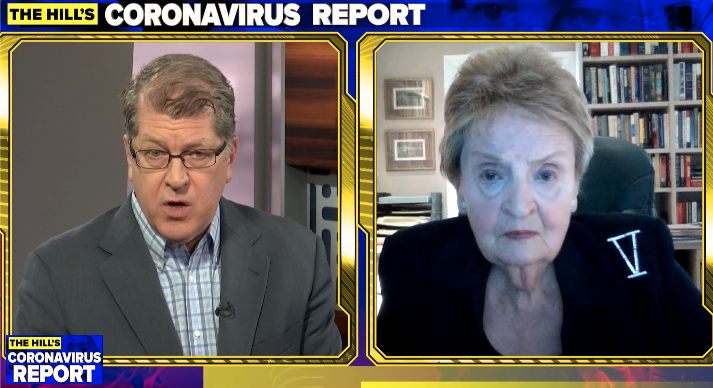 Welcome to The Hill’s Coronavirus Report. It’s Friday, May 1.

V! Former secretary of State Madeleine Albright told me in my interview with her today that when she and her parents were in exile from Czechoslovakia and listening in London to the BBC during the bombing raids of WWII, the broadcasts always started with the first five notes of Beethoven’s Fifth, “da da da dum,” which in Morse code means “V” for victory. And so she is wearing a big “V for victory over the virus” broach in my interview.

There are pessimists out there that vaccines and antivirals will take far longer to develop that anyone can currently imagine and others who suggest that we can have drug options by the end of the year. The truth lies somewhere in the middle most likely, but as Albright shared, there is not much most people can do to battle the virus beyond what they are doing — good hygiene, washing hands, social distance. But the bigger thing is to be resilient, tough it out — know that this is a time when people need to summon their energy and formidable will to hang in there while scientists get us the cure to kill this vicious plague.

One of my political science professors long ago said that you really don’t know the norms of a society until you see it under stress. With the exception perhaps of the photos of armed protesters clamoring to get near the governor of Michigan, the images of heroism, of sacrifice, of resilience of front-line health workers, parents educating their children at home, people helping to deliver food to our seniors have been so heartening about the core goodness in our society. Perhaps it is a good thing to start our mornings with a bit of Beethoven, “da da da dum.”

V for Victory over the virus.

Your Coronavirus Report team includes Steve Clemons, editor-at-large of The Hill, and researcher Andrew Wargofchik. Follow us on Twitter at @SCClemons and @a_wargofchik. CLICK HERE to subscribe to The Hill’s Coronavirus Special Report. To stay up-to-date on all things coronavirus, visit TheHill.com and SUBSCRIBE to our Overnight Healthcare newsletter for the latest developments from the daily White House coronavirus task force briefings. 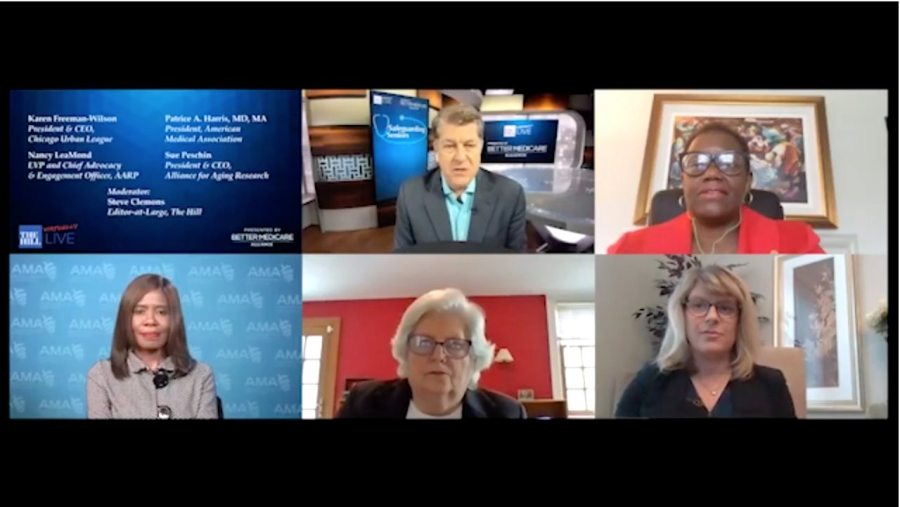 Dr. Patrice Harris of the American Medical Association, AARP’s Nancy LeaMond, Karen Freeman-Wilson of the Chicago Urban League and Alliance for Aging Research’s Sue Peschin also joined us for a discussion on supporting seniors, tackling disparities and the role of innovation in the age of COVID-19.

CORONAVIRUS NUMBERS AT A GLANCE

According to our colleague at The Hill, Reid Wilson: “More than a thousand in America died every day in April, according to The Covid Tracking Project, an independent consortium of journalists and data scientists. The death toll topped 2,000 ten times, including over the last three days of the month. On Wednesday, 2,700 people in America died — the single largest one-day tally so far. And the number of cases continues to rise. The United States confirmed an average of between 28,000 and 29,000 new cases per day over every week in April. If there is cause for optimism, it is that the past five days has seen that average drop, but to a still-staggering 25,700 new cases per day.”

Administration describes a dash for a coronavirus vaccine that could be available in January. The Trump administration is racing to develop a coronavirus vaccine that could be fielded nationwide by January, officials said Thursday, as national stay-at-home guidance expired. The January timeline represents a fast pace for vaccine development but still means there would be no fail-safe protection from the novel coronavirus until long after most Americans are likely to have returned to work or school and until after the November elections. (Washington Post)

Trump authorizes Pentagon to ready reserves for cartel fight. President Trump on Thursday announced he has issued an executive order authorizing the Department of Defense to activate select reserve of the armed forces as part of a counternarcotics operation. Trump sent a letter to Speaker Nancy Pelosi (D-Calif.) alerting her that he has instructed Defense Secretary Mark Esper to provide up to 200 additional personnel for the operation. (The Hill)

Veterans Affairs ordered nearly $300,000 in body bags due to coronavirus. A contract document first reviewed by Politico shows that the VA ordered the body bags from a major contractor called ISO Group on April 15. The VA has seen its number of COVID-19 cases and deaths rise. As of Thursday, 8,500 VA patients had tested positive for the virus and nearly 500 had died. (The Hill)

@RepKClark Forcing employees to work without the proper protective equipment is reckless and puts all of us at risk. Stand with workers- today, and every day. #EssentialWorkersDay #MayDay2020 #MayDay #InternationalWorkersDay #ProtectAllWorkers

@SteveDaines ICYMI: Helena is receiving a 3D printer that will print swabs to help with Coronavirus testing. This is a critical tool as we work to safely reopen Montana.

@SenBlumenthal The only people threatened by oversight are the ones trying to game the system or hide something. Getting relief to those who need it—small businesses & struggling families—means keeping an eye on the corporate fat cats who are trying to cut them in line.

Texas set to reopen under political shadow. Texas will begin to reopen an economy shuttered by the coronavirus pandemic on Friday, an event with outsized implications in the political world given the Lone Star state’s importance to both political parties. Restaurants and retailers will begin to open under an order from Gov. Greg Abbott (R), whose directive will override local coronavirus lockdown orders. (The Hill)

Americans more comfortable with small steps as states reopen: survey. Americans are wary of participating in a variety of activities as a number of states prepare to reopen sections of their economy, a new survey released by the Democracy Fund + UCLA Nationscape Project shows. Respondents to the poll said they are more comfortable with small steps than full returns to normal life following stay-at-home orders and self quarantines that have taken place nationwide amid the coronavirus pandemic. (The Hill)

France maps Covid-19 impact to aid in easing lockdown. French health authorities released a map showing the areas of the country that are the most affected by the virus. The map is set to serve as a reference when the country eases lockdown measures after May 11. (France 24)

More than 70 U.S. labs join CDC initiative to study coronavirus genome. The Centers for Disease Control and Prevention on Thursday announced that at least 75 public health, academic and commercial institutions are coming together to increase research on the spread of coronavirus throughout the country. (The Hill)

Infectious disease research warns coronavirus pandemic could last two years. A new report is predicting that the coronavirus pandemic may last as long as two years and that it could take up to two-thirds of the global population being immune to effectively control the spread of the virus. The report released Thursday from the Center for Infectious Disease Research and Policy (CIDRAP) at the University of Minnesota said that due to the coronavirus’s ability to spread among people who appear to be asymptomatic, it may be harder to control than flu outbreaks or other pandemics. (The Hill)

Wall Street tumbles as tech stocks take a hit. U.S. stocks fell Friday as investors reeled from earnings reports by Apple and Amazon that showed the depth of the coronavirus’s impact on big business. The S&P 500 was down nearly 2 percent in early trading, dragged lower by shares of tech companies. (New York Times)

Public companies received $1 billion in stimulus funds meant for small businesses.  Publicly traded companies have received more than $1 billion in funds meant for small businesses from the federal government’s economic stimulus package. Nearly 300 public companies have reported receiving money from the fund, called the Paycheck Protection Program, according to the data compiled by The Washington Post.

What American life will look like after the coronavirus crisis ends. Much like the generation born after the First World War was shaped by that conflict and the Spanish flu, strengthening them to take on the Great Depression and the Second World War, here is the anvil on which the strength of our young people will be tested or broken. But for all of our current struggles, there is an opportunity for each of us — and one that we will persevere through. Only our actions will show how we define this period, and not how coronavirus defines us. (Kristin Tate for The Hill)

YOUR WORLD, YOUR STORIES

A reader from Japan, Sooim Kim, heard that Steve Clemons’s big willow tree in Chestertown, Md., was destroyed by Thursday’s heavy wind and rain storm. She sent him this, “If you need some talisman for your next young willow tree, we can send you the “Abe-no-masks” we got from the Japanese government. We don’t need them. You can place them around the trunk so that the young tree won’t be cold. We will send you these Abenomasks as soon as the international mailing system is recovered.” Abenomasks have become somewhat a subject of comedy shows and light ridicule in Japan as they refer to the government-distributed masks with a play on the old term, “Abenomics” in Japan.

SEND US YOUR OWN PICS – from your own walks or adventures – during this time of physical distancing but social connection. And SEND US YOUR STORIES of how teleworking is going, what you have learned from homeschooling, new ways to exercise, and special moments or standout heroism you want to share. What’s working for you? What’s comic in these dark days?

Send to YourStories@TheHill.com. Our thoughts are with you, our readers, and we hope and trust that no matter the weight of burdens on you now — and it’s not a good story for everyone we know — that we all stand together, resilient and confident, on the other side of this. There will be another side.

CLICK HERE to subscribe to The Hill’s Coronavirus Report. To stay up-to-date on all things coronavirus, visit TheHill.com and SUBSCRIBE to our Overnight Healthcare newsletter for the latest developments from the daily White House coronavirus task force briefings.