115th Congress will be most racially diverse in history

The new Congress set to take office in January is slated to be the most racially diverse in history.

Record numbers of Hispanics, African-Americans, Asian-Americans and women of color will serve in the next legislative session.

{mosads}Most of the racial, gender and religious diversity will be represented by Democratic lawmakers in the House and Senate, even though the party is the minority of both chambers.

The Congress will still be overwhelmingly white and male compared to the overall population.

And the number of women serving in the House and Senate is flat. Fourteen women won election for the first time this month, but those gains will be offset by the number of female lawmakers who are leaving at the end of this year.

Here’s a look at the demographics of the new Congress.

The number of women will stay the same in the new Congress, at a total of 104 members, or 19 percent. That’s far less than the overall American population, which is 50 percent female.

Female representation in the House will drop slightly. The number of women will go from 84 to 83 as a result of 11 female lawmakers’ retirements. Some of those women are being replaced by men.

A record number of 21 women will serve in the Senate, however.

And the number of women of color is set to quadruple.

Sen. Mazie Hirono (D-Hawaii) was only the second minority woman to ever serve in the Senate. Democrats Tammy Duckworth (Ill.), Kamala Harris (Calif.) and Catherine Cortez Masto (Nev.) will join her.

Harris, whose father is from Jamaica and mother is from India, will be both the second black woman to serve in the Senate and the first woman of South Asian descent. 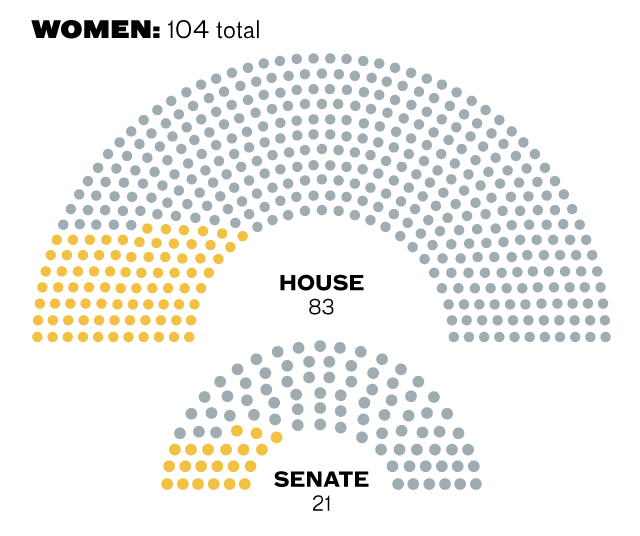 Hispanics will hit a new record in the next Congress, with 38 members across both chambers.

Thirty-four Hispanics will serve in the House, while the Senate will have four Hispanic members.

Cortez Masto will be the first Latina to serve in the Senate.

And in the House, Espaillat, who’s replacing retiring Rep. Charles Rangel (D-N.Y.), will be the first Dominican-American elected to Congress.

The new Congress is poised to have a record number of black lawmakers, increasing from 46 to 49.

Lisa Blunt Rochester will become the first African-American and first woman to represent Delaware in Congress.

In Florida, former Orlando Police Chief Val Demings will also be the first woman and first African-American to represent her district.

A record number of 15 Asian-Americans will be in the next Congress, up from the current 11 members.

Hirono, Harris and Duckworth, an incumbent House member, will make up the ranks of Asian-Americans in the Senate.

Rep. Ami Bera (D-Calif.) is currently the only Indian American serving in Congress. That’ll change in January when he’s joined by Harris and three new House members: Ro Khanna (Calif.), Pramila Jayapal (Wash.) and Raja Krishnamoorthi (Ill.). (Bera’s reelection race has not been formally called yet, but he is leading his GOP challenger as of Wednesday.) 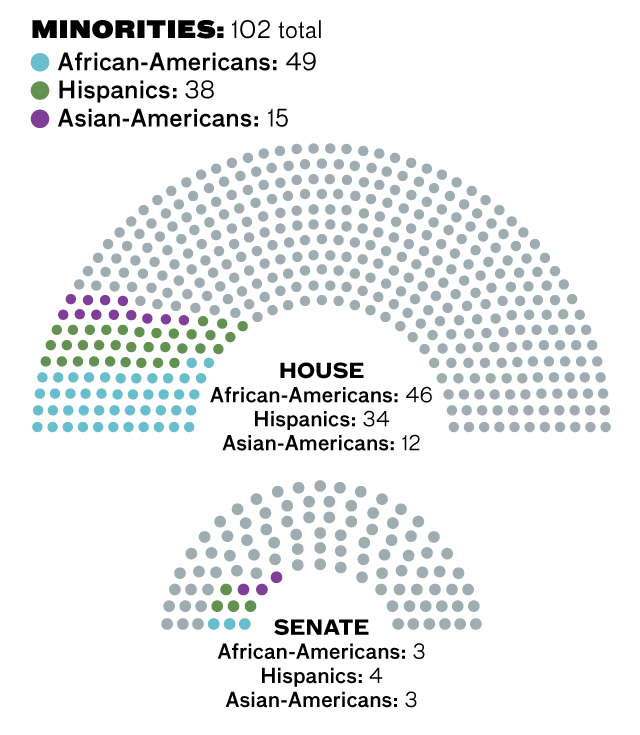 The number of gay and lesbian members in Congress will stay the same. Sen. Tammy Baldwin (D-Wis.) is the first openly gay or lesbian person to serve in the Senate, and she remains the only one. 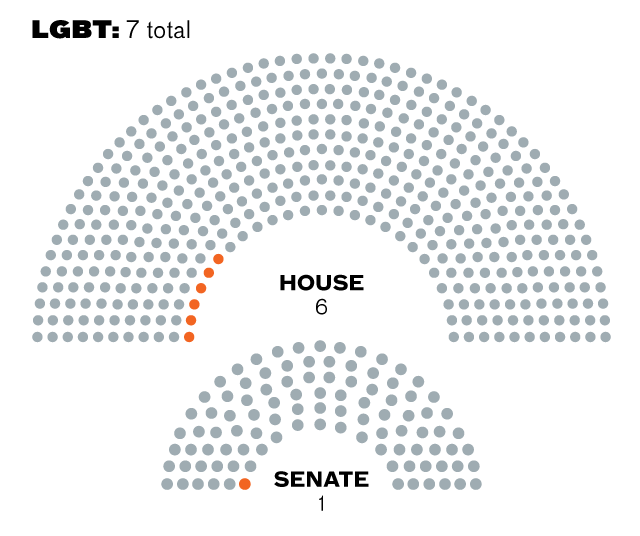 The overwhelming majority of lawmakers in Congress identify as Christians, and that won’t change in January.

Two Muslims, Reps. Keith Ellison (D-Minn.) and André Carson (D-Ind.), will return to the next Congress.

The number of Jewish lawmakers will go up to 30 from 28, which is still slightly fewer than in previous sessions of Congress. Rep. Lee Zeldin (R-N.Y.) will no longer be the only Jewish Republican in Congress after David Kustoff (R-Tenn.) is sworn into office.

Rep. Tulsi Gabbard (D-Hawaii) is currently the only Hindu in Congress. Starting in January, she’ll be joined by the three new Indian-American House members, all of whom identify as Hindu.

The next Congress will have three Buddhists: Hirono in the Senate and Reps. Colleen Hanabusa (D-Hawaii) and Hank Johnson (D-Ga.) in the House. 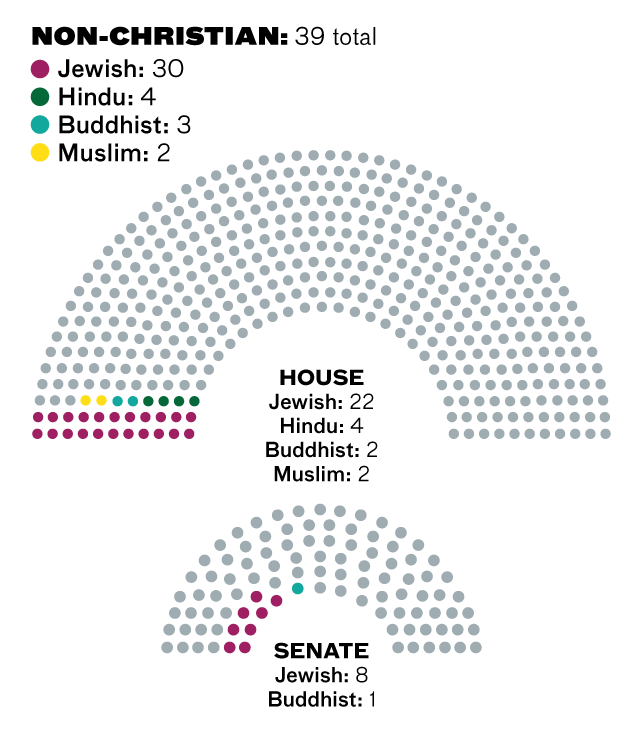