Speaker Paul Ryan (R-Wis.) was criticized Saturday on social media for citing a Pennsylvania woman whose paycheck went up by $1.50 a week as a success of the recently passed GOP tax-reform bill.

Ryan tweeted a link to an Associated Press report detailing how some workers have begun to see more take-home pay as the result of new withholding guidelines following the passage of the bill.

{mosads}The AP featured multiple workers who have seen an increase in their pay, including Julia Ketchum, a high school secretary in Pennsylvania. Ketchum’s paycheck increased by $1.50 a week, and she told the AP the increase would cover her Costco membership for the year.

Ryan highlighted Ketchum’s story in a tweet Saturday that was later deleted. 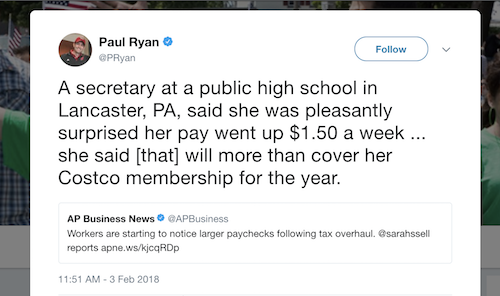 Social media users and Democratic lawmakers fired back at Ryan over his tweet.

That tweet about the $1.50 a week is not a PR mistake. It is really what they think.

Did you tell her how much the paychecks of the 1% went up a week? Or that hers could have gone up a lot more if you had given them a lot less? #GOPTaxScam https://t.co/X7YBcdAzTH

As a thank you for passing a $1 trillion corporate tax cut, Paul Ryan received $500,000 in campaign contributions from the Koch brothers, which would probably cover the cost of buying a Costco. https://t.co/piiWqzOEGo

Wells Fargo, fresh off of defrauding millions of Americans, gets $3.4 billion. https://t.co/HT4yq3znxw

Paul Ryan: A secretary is saving $1.50 a week from the tax bill.

“A Costco mention will please the poors,” thinks Ryan. “That is where they buy their huts, and the slurry that they eat” https://t.co/5llDDSEgmE

You gave $1.5 TRILLION to the richest people on the planet, and you’re using an anecdote about someone making an extra 21 cents a day to argue it was good for the rest of us? Hahahahahaha https://t.co/FoFk4Thupv

Republicans are proud of themselves for [checks notecard….adjusts glasses….squints] someone making .21 cents more a day? https://t.co/qMne593S3M

Earlier this week, House Minority Leader Nancy Pelosi (D-Calif.) was criticized by Republicans, including President Trump and Vice President Pence, when she referred to companies giving $1,000 bonuses after the tax bill as “crumbs.”

Republicans have hammered Pelosi for the comments and are looking to tie her remarks to Democratic candidates in the upcoming 2018 midterms.