The 31 Trump districts that will determine the next House majority

Republicans are eyeing a path to the House majority that takes them through Trump country.

The GOP has already put 55 districts held by Democrats on its target list for 2020. But Republican hopes are highest in the 31 districts that President Trump carried in 2016. That includes 13 districts where the real estate mogul bested Hillary Clinton by more than 6 points.

Those lawmakers are among 33 Republicans that Democrats are hoping to oust in 2020 as the party looks to expand its nascent House majority.

Republicans need to pick up roughly 20 seats to win back control of the lower chamber.

Here’s a look at where next year’s battles for the House will be fought:

Rep. Tom O’Halleran (D-Ariz.) held onto his seat in November after notching a decisive 7.6-point victory over Republican challenger Wendy Rogers. Trump edged out Clinton in Arizona’s 1st District in 2016 by just over 1 point.

Rep. Lucy McBath’s (D-Ga.) 2018 victory in Georgia’s 6th District brought former Rep. Karen Handel’s (R-Ga.) brief tenure in the House to an end and handed Democrats a House seat they had aggressively sought in a 2017 special election. Trump won there in 2016 by 1.5 points.

Rep. Lauren Underwood (D-Ill.) dethroned four-term former Rep. Randy Hultgren (R-Ill.) in November to become the youngest black woman ever elected to Congress. Trump notched a nearly 4-point win in her district in 2016, however, and the GOP is looking to turn it red again in 2020.

Rep. Cheri Bustos (D-Ill.) easily coasted to a fourth term in 2018, beating back a challenge from Republican Bill Fawell. She’s currently the chairwoman of the Democratic Congressional Campaign Committee (DCCC), meaning that she’ll be tasked with preserving the Democrats’ House majority in 2020, along with her own seat. Trump notched a slim 0.7-point victory in her district in 2016.

Rep. Abby Finkenauer (D-Iowa) ousted two-term former Rep. Rod Blum (R-Iowa) in this northeast Iowa district in November — one of two Iowa districts that Democrats managed to flip in 2018, along with the state’s 3rd District. Still, Trump won there by about 3.5 points two years earlier.

Rep. Jared Golden (D-Maine) may not have won the most votes on Election Day. But thanks to Maine’s recent switch to ranked-choice voting, he finished with enough votes to defeat former Rep. Bruce Poliquin (R-Maine) days after polls closed. Trump previously won Maine’s 2nd District by more than 10 points.

Rep. Elissa Slotkin (D-Mich.) ousted former Rep. Mike Bishop (R-Mich.) in Michigan’s 8th District, two years after Trump scored a nearly 7-point win over Clinton. Slotkin’s victory was seen by many as a sign of a Democratic resurgence in the Upper Midwest, an area that played a crucial role in sending Trump to the White House. 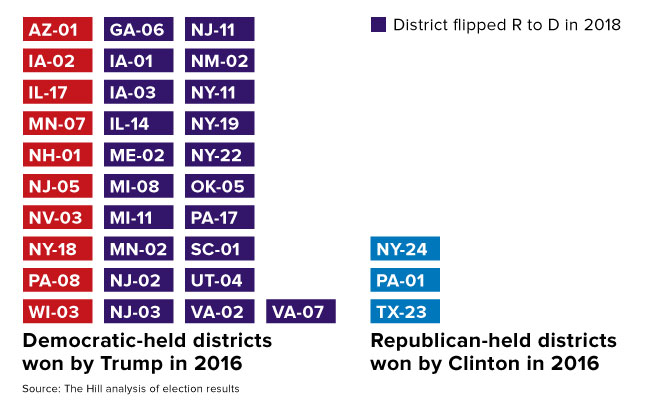 Rep. Haley Stevens (D-Mich.) defeated Republican Lena Epstein in November in the race to succeed now-retired Rep. David Trott (R-Mich.). In doing so, she became the first Democrat elected to a full two-year term in Michigan’s 11th District since 1964. Trump previously won her district by more than 3 points.

Rep. Chris Pappas’s (D-N.H.) 8.6-point win over Republican Eddie Edwards in 2018 kept New Hampshire’s 1st District in Democratic hands after former Rep. Carol Shea-Porter (D-N.H.) announced that she would not seek reelection. That win was a relief for Democrats after Trump narrowly won the district in 2016.

Rep. Andy Kim (D-N.J.) unseated two-term former Rep. Tom MacArthur (R-N.J.) in November, a win that left only one Republican in New Jersey’s congressional delegation, Rep. Chris Smith. But Trump still carried the district by more than 6 points in 2016, making Kim’s seat a prime target for the GOP in 2020.

Rep. Josh Gottheimer (D-N.J.) easily fended off a challenge from Republican John McCann in November, despite Trump’s narrow 1.1-point victory in the district. While Gottheimer’s win bolstered Democratic hopes in the district, Republicans still see the two-term congressman as a target in 2020.

Rep. Mikie Sherrill (D-N.J.) beat out Republican Jay Webber by nearly 15 points in 2018 in the race to succeed now-retired Rep. Rodney Frelinghuysen (R-N.J.). Sherrill was the first Democrat elected to represent the district in the House since 1982, and Republicans are eager to take it back in 2020. Trump carried the district by just under 1 point in 2016.

Rep. Antonio Delgado (D-N.Y.) ousted former Rep. John Faso (R) in 2018 after a bitter campaign in which some Republican groups attacked Delgado over his past career as a rapper. Trump carried the district in 2016 by nearly 7 points.

Rep. Anthony Brindisi (D-N.Y.) wrestled this district from one-term former Rep. Claudia Tenney (R-N.Y.) in November after voters there chose Trump over Clinton by a more than 15-point margin. But Brindisi’s victory was a tight one — less than 2 points — and he’s almost certain to face an aggressive GOP challenge next year.

In what was one of election night 2018’s biggest upsets, Rep. Kendra Horn (D-Okla.) defeated former Rep. Steve Russell (R-Okla.), turning Oklahoma’s 5th District blue for the first time in more than 40 years. But with Trump’s roughly 13-point victory there in 2016, Horn’s reelection is far from sealed.

Rep. Matt Cartwright (D-Pa.) won a fourth term in the House in November after beating back a challenge from Republican John Chrin in Pennsylvania’s newly formed 8th District. Previously, Cartwright had represented the state’s 17th District. Trump won the area by nearly 10 points.

Rep. Conor Lamb (D-Pa.) won his first House seat in the March 2018 special election for Pennsylvania’s 18th District. But redistricting led him to face off against former Rep. Keith Rothfus (R-Pa.) in the state’s 17th District in November. He won that race by nearly 13 points, despite Trump’s 2.6-point victory there in 2016.

Rep. Joe Cunningham (D-S.C.) vanquished former South Carolina state Rep. Katie Arrington (R) in this low country district last year, becoming the first Democrat to represent it in Washington since the 1980s. Trump carried the district by about 13 points in 2016.

Rep. Ben McAdams (D-Utah) was declared the winner in this district last year after a prolonged vote-counting process gave him an ultra-thin 694-lead over two-term former Rep. Mia Love (R-Utah). That margin — 0.258 percent — was just over the 0.25 percent that would have allowed for a recount. Trump beat out Clinton in the district in 2016 by nearly 7 points.

Despite Trump’s 2016 victory in this western Wisconsin district, Rep. Ron Kind (D-Wis.) secured a 12th term in the House last year, scoring a nearly 20-point victory over Republican Steve Toft. His win was another welcome sign for Democrats for signs of strength in the upper Midwest.

Despite Clinton’s 3.6-point win in his district in 2016, Rep. John Katko (R-N.Y.) notched a roughly 5-point victory over his Democratic challenger, Dana Balter in 2018. Democrats aren’t giving up, however. Katko is on the DCCC’s target list for 2020.

After an expensive and closely watched race against wealthy philanthropist Scott Wallace in 2018, Rep. Brian Fitzpatrick secured a second term in the House. Fitzpatrick’s win in a district that Clinton carried by 2 points stood in contrast to a long series of losses by other Republicans in suburban districts across the country. Still, that has left Democrats eager to challenge him again next year.

Rep. Will Hurd’s (R-Texas) vast district on the U.S.-Mexico border has long been on Democrats’ wish list. He successfully fought off an aggressive challenge from Democrat Gina Ortiz Jones last year — Hurd won by just 0.5 points — and Democrats are hoping for a different outcome in 2020. Clinton carried the district by 3.4 points over Trump in 2016.

by Rebecca Beitsch, Mike Lillis and Brett Samuels 1 day ago
House  /  1 day ago
See All

Women lean into the fight over abortion rights