Mass shootings have hit 158 House districts so far this year

More than a third of all House lawmakers represent districts where a mass shooting has occurred this year, highlighting the bipartisan pressure on Congress to take action on gun legislation after a wave of killings in Texas and Ohio during August.

An analysis by The Hill found that about two-thirds of those shootings have taken place in districts represented by Democrats, many of whom represent cities hard-hit by the scourge of gun violence, while a third occurred in Republican-held districts, from the suburbs to rural communities.

{mosads}Through Friday, 158 congressional districts had experienced at least one mass shooting this year. Fifty-two of those districts are held by Republicans, and 106 are represented by Democrats.

The rash of mass shootings has prompted a kind of rote habit among members of Congress who all too often find themselves grieving alongside their constituents. In interviews, lawmakers said they raced to the scenes of mass shootings, then spent the ensuing weeks helping facilitate government assistance to first responders and victims in between memorial services and vigils.

“When schoolchildren are taught how to hide from active shooters before being taught how to write their name, we know that we have a problem in this country with gun violence,” said Rep. Elaine Luria (D-Va.), who represents the Virginia Beach community where a disgruntled city employee killed 12 people at a municipal building in May before being killed by police. 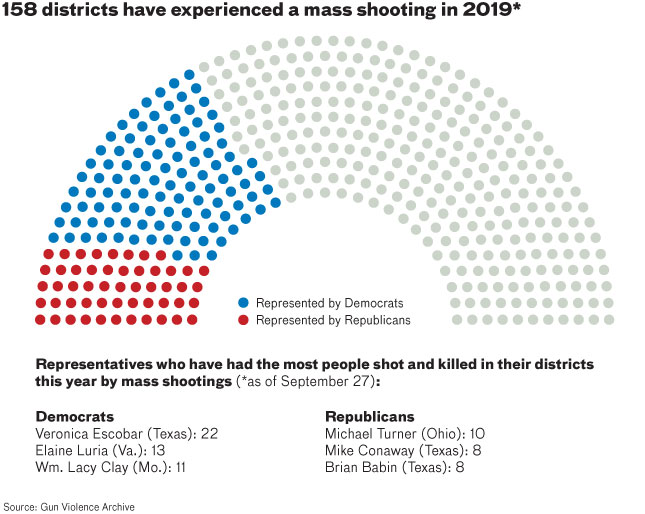 More than 315 mass shootings have taken place this year alone, according to the Gun Violence Archive, which tracks incidents in which four or more people are injured or killed. Those shootings have claimed the lives of at least 346 people, and another 1,200 have been injured.

“We now live in a time in which it appears no place is entirely safe from the threat of violence. Our movie theaters, concert venues, clubs, schools, college campuses, churches and parks have all become backdrops to some of the deadliest shootings in United States history,” said Rep. Maxine Waters (D-Calif.). “There are no words, thoughts or prayers that can quell the unspeakable horror that has befallen so many communities that have experienced mass shootings and gun violence.”

The epidemic of gun violence has received more attention this year than in decades, after Democrats reclaimed control of the House in the 2018 midterm elections.

The House passed a sweeping background check expansion in February. Rep. Rosa DeLauro (D-Conn.), chairwoman of the House Appropriations subcommittee that oversees the Centers for Disease Control and Prevention (CDC) and the Department of Health and Human Services, held her first hearing of the year on gun violence and added $50 million in funding for the CDC and National Institutes of Health to study gun violence.

In recent weeks, Democrats have advanced legislation that would allow law enforcement to take firearms away from those who are deemed a danger to themselves or others, a so-called red flag provision that many states have adopted.

But the prospects of bipartisan action are remote. Negotiations between Senate Democrats and the White House have faltered in recent weeks. Senate Majority Leader Mitch McConnell (R-Ky.) has blocked debate on the House-passed bills, and he has said he will not bring up any gun legislation unless he is certain President Trump will sign it into law.

Some Democrats have warned that mismanaging the politics of gun control or gun safety bills would threaten their party’s political standing. Rep. Seth Moulton (D-Mass.), a retired Marine who served four tours of duty in Iraq, said Democrats need to be realistic about what can earn bipartisan support in the Senate.

“Too often Democrats have put forward bills without understanding guns or how they are used, and that’s part of the issue,” Moulton told The Hill. “It’s nice to pass gun ban bills in the House, but unless they pass in the Senate and get signed into law they’re not going to save any lives.”

{mossecondads}A handful of Republicans have signaled they would back red flag legislation, including Rep. Michael Turner (R-Ohio), who represents a Dayton-area district where a man killed nine people and wounded 17 more in a popular entertainment district in August. Ohio Gov. Mike DeWine (R) introduced a red flag proposal in response to that shooting.

Most Republicans, though, are not on board with new legislation in Washington.

“Cases of gun violence across the nation are not all the same. And a blanket ban on certain types of guns or gun confiscation altogether isn’t going to stop a criminal from committing a crime,” said Rep. Buddy Carter (Ga.), one of 52 Republicans in Congress whose district experienced a mass shooting this year. “This type of crime is not going to be solved in Washington, D.C. It needs to [be] solved in Savannah, Ga., in our communities.”

There is some debate over what constitutes a mass shooting. Some experts define them as incidents that injure or kill four or more people, while others set a higher threshold.

James Fox, a criminologist at Northeastern University, distinguishes between mass shootings and mass killings, which separates incidents related to gang violence from events like the attack on a Walmart in El Paso, Texas, in August that killed 22.

Lars Dalseide, a spokesman for the National Rifle Association, said the lower threshold for mass shootings is deceptively broad.

“While more can be done to address this issue, such as enforcing existing laws, prosecuting actual criminals, and providing proper mental health treatment for those in need, you can’t begin to have an honest debate if the starting point is disingenuous,” Dalseide said in an email.

An analysis of the mass shootings that have taken place in just the first nine months of the year show a distinction exists. The 18 mass shootings in Rep. Danny K. Davis’s (D-Ill.) Chicago-based district have killed seven people and wounded 78; most of those incidents were likely gang or drug-related, Davis said.

Fifteen shootings this year have resulted in more than four deaths. Three of the four deadliest incidents — the El Paso attack, the Dayton attack and drive-by shootings in Midland and Odessa, Texas — took place in August. Ten of the 15 incidents happened between June and August.

When those shootings happen, lawmakers and their staffs scramble to get to the scene. Rep. Scott Peters (D-Calif.) sent an aide to the Chabad of Poway synagogue just after a 19-year-old man armed with an assault rifle shot four people, killing a 60-year-old woman on the last day of Passover.

“Throughout the day, we remained in contact with various law enforcement agencies and local organizations who were assisting on the ground. That night, we stood with the community in solidarity at one of the vigils,” Peters said.

Rep. Bill Foster (D-Ill.) learned of a shooting at a manufacturing plant in Aurora, Ill., when he landed at O’Hare International Airport. Foster attended memorials for the five people killed at the plant and met with the six police officers who were wounded as they responded to the shooting.

Others have been touched by gun violence more directly. Rep. Lucy McBath (D-Ga.) decided to run for Congress after her son was murdered in 2012. A young man died in front of Rep. Jesús Garcia’s (D-Ill.) home two years ago. Rep. Steven Horsford’s (D-Nev.) father was shot in a botched robbery, and Davis’s grandson was shot and killed.

“I know the impact that [gun violence] has had on members of my family. It is indeed a public health issue,” Davis told The Hill.

Alexandra Pelosi opens up about her father’s attack, says ‘I haven’t slept since’