Here are the Confederate statues in the Capitol

Congressional Democrats launched a new push this week to remove Confederate statues from the Capitol grounds.

Speaker Nancy Pelosi (D-Calif.) called for their removal Wednesday by saying the statues, donated by states, pay “homage to hate, not heritage.”

Reps. Barbara Lee (D-Calif.) and Bennie Thompson (D-Miss.) introduced a bill Thursday to send the statues back to states or the Smithsonian within 120 days, and Sen. Cory Booker (D-N.J.) introduced a companion bill in the Senate.

The killing of George Floyd, an unarmed black man who died in Minneapolis police custody after an officer knelt on his neck for more than eight minutes, has spurred protests around the country and galvanized efforts to take down Confederate monuments nationwide.

Eleven statues in the National Statuary Hall Collection commemorate Confederate soldiers and officials, including several in their Confederate uniforms. Democrats first pushed for their removal in 2017.

GOP lawmakers have argued that the authority to remove statues lies with the states that donated them.

“The states make that decision,” Senate Majority Leader Mitch McConnell (R-Ky.) said Thursday. “I think the appropriate way to deal with this issue is to stick with the tradition.”

Here are the statues that Democrats say should be removed from the Capitol. 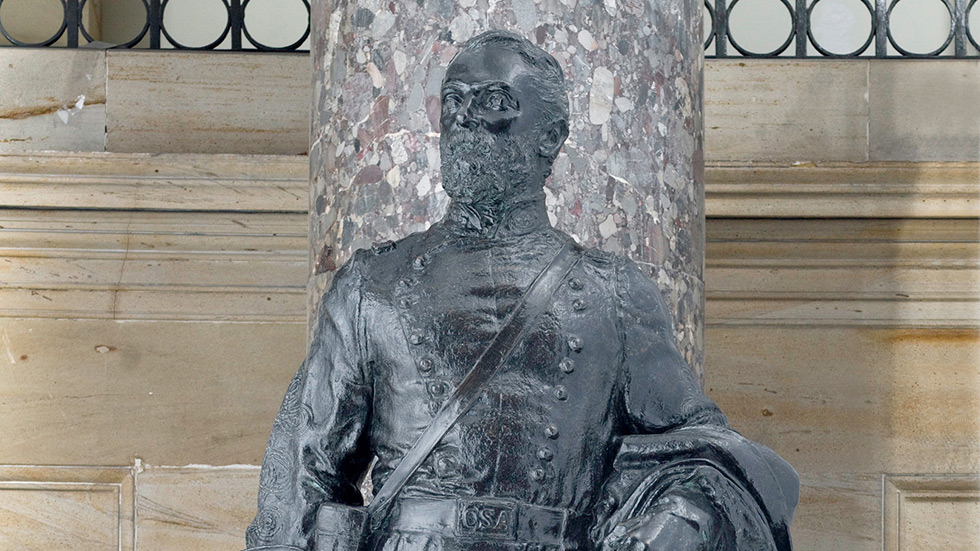 After graduating from West Point, Wheeler resigned from the U.S. Army to serve as a general in the Confederate Army and was considered one of its top cavalry leaders. Wheeler later represented Alabama for eight terms as a Democrat in the House. He also led troops as general in the U.S. Army during the Spanish-American War and the Philippine-American War. 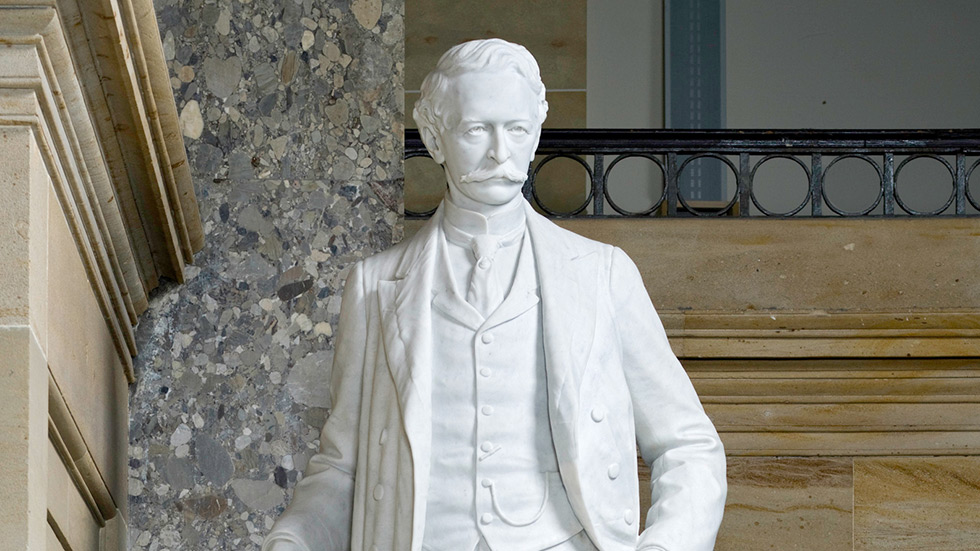 A lawyer known for his fierce loyalty to the Confederacy, Rose served as chancellor of Pulaski County until it was captured by Union forces. He founded the Rose Law Firm in Little Rock in 1865, which later became famous for its role in the 1992 Whitewater controversy that involved former President Clinton. Rose also helped found the American Bar Association. 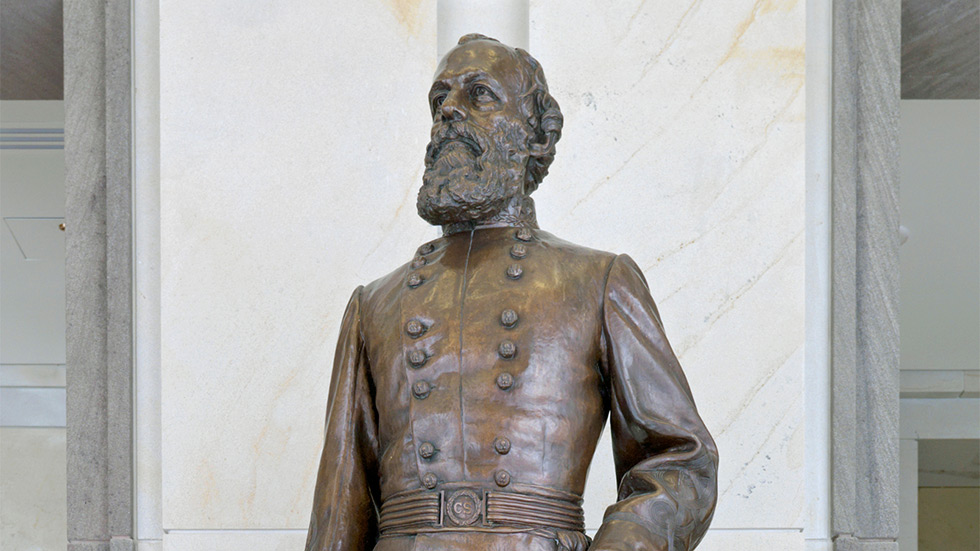 After serving in the U.S. Army during the Mexican-American War, Smith resigned to join Confederate forces and rose to the rank of general. He surrendered the last field force of the Confederate Army in Galveston, Texas, in 1865. He later worked as a university professor and chancellor in Tennessee.

Florida donated Smith’s bronze statue to the Statuary Hall Collection in 1922 and it now sits in the Capitol Visitor Center. In 2018, then-Gov. Rick Scott (R), who is now a senator, signed legislation to replace Smith’s statue with one of African American educator and civil rights activist Mary McLeod Bethune. Expected to be completed this year, Bethune’s statue will be the first monument of an African American woman donated by a state in Statuary Hall. 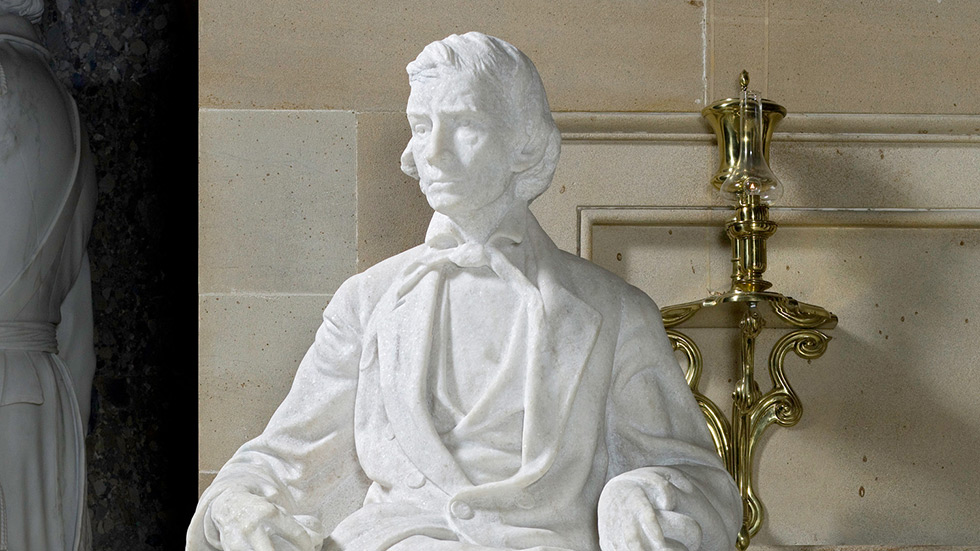 Stephens served as vice president of the Confederate States from 1861 to 1865. He represented Georgia as a Democrat in the House before and after the Civil War, and later became the state’s governor. In his Cornerstone Speech in 1861, Stephens said the Confederacy was founded “upon the great truth that the negro is not equal to the white man; that slavery subordination to the superior race is his natural and normal condition.”

Georgia donated Stephens’s marble likeness in 1927, which now sits in Statuary Hall. In her letter Wednesday, Pelosi cited the Cornerstone Speech and noted that Stephens and President of the Confederate States Jefferson Davis, who also has a statue at the Capitol, were both charged with treason against the United States. 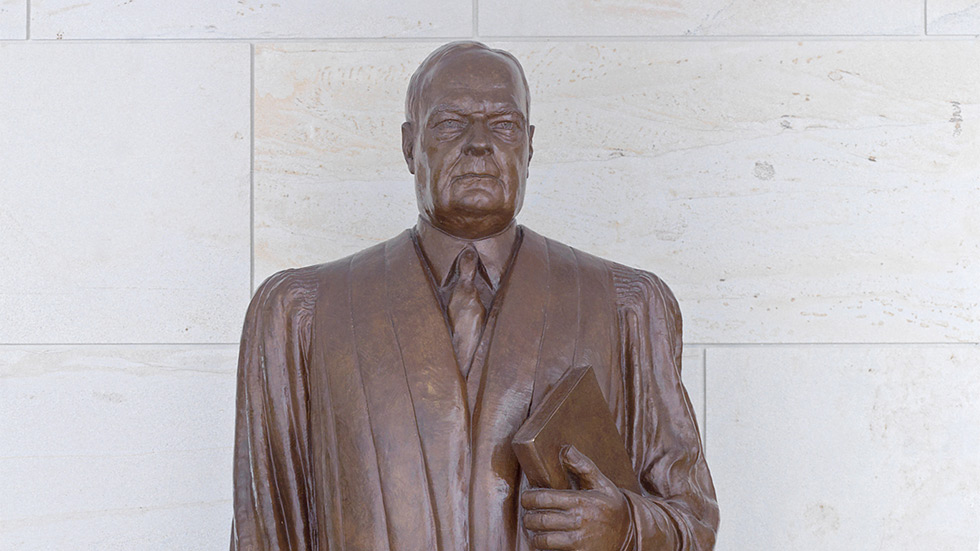 White enlisted in the Confederate Army and was captured by Union forces in 1865. After the Civil War, he served in the state Senate and U.S. Senate before President Grover Cleveland nominated him to the Supreme Court in 1894. He became chief justice in 1910 and served in that position until his death in 1921. 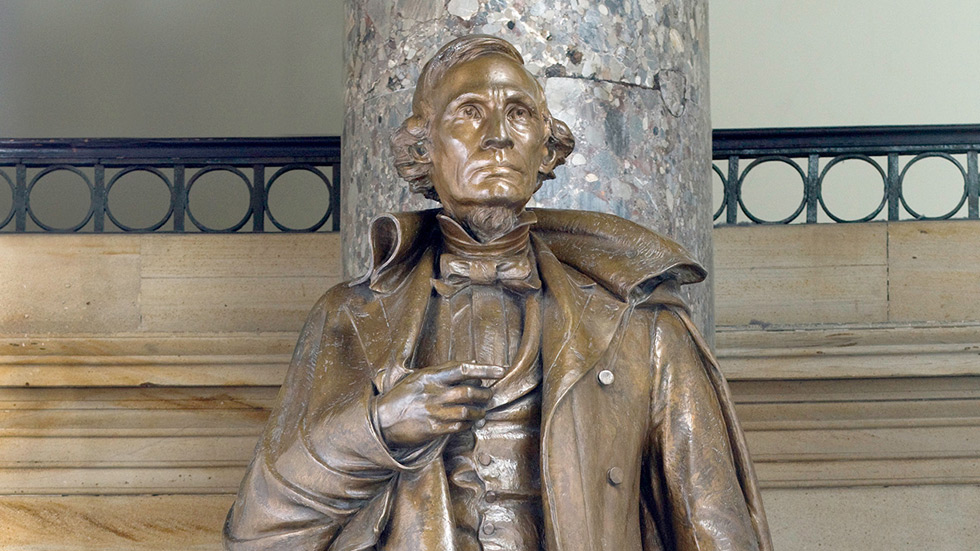 A plantation owner, Davis was appointed President of the Confederate States in 1861. He had previously served in the U.S. Army, House of Representatives and Senate. Davis was U.S. Secretary of War under President Franklin Pierce from 1853 to 1857. After his arrest in 1865, he was charged with treason but never tried.

His bronze likeness sits in Statuary Hall, having been donated by Mississippi in 1931. Along with Stephens, Pelosi noted Davis’s arrest for treason against the United States in her letter Wednesday. 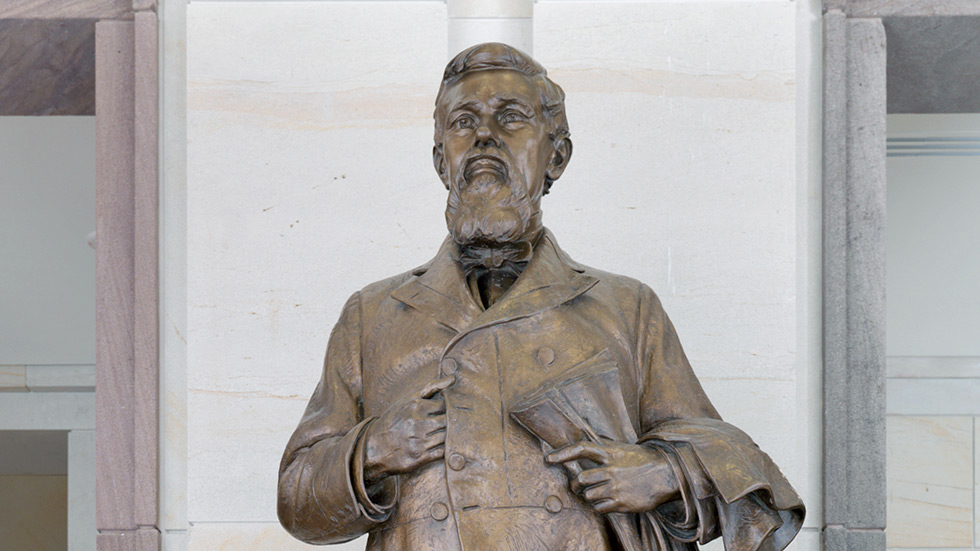 A member of the Mississippi Secession Convention, George served as a colonel in the Confederate Army and was captured twice. He returned to practicing law after the war and served on the Supreme Court of Mississippi. He campaigned to disenfranchise African Americans as a member of the Senate from 1881 until his death in 1897.

George’s bronze likeness was donated by Mississippi in 1931 and now sits in the Capitol Visitor Center. 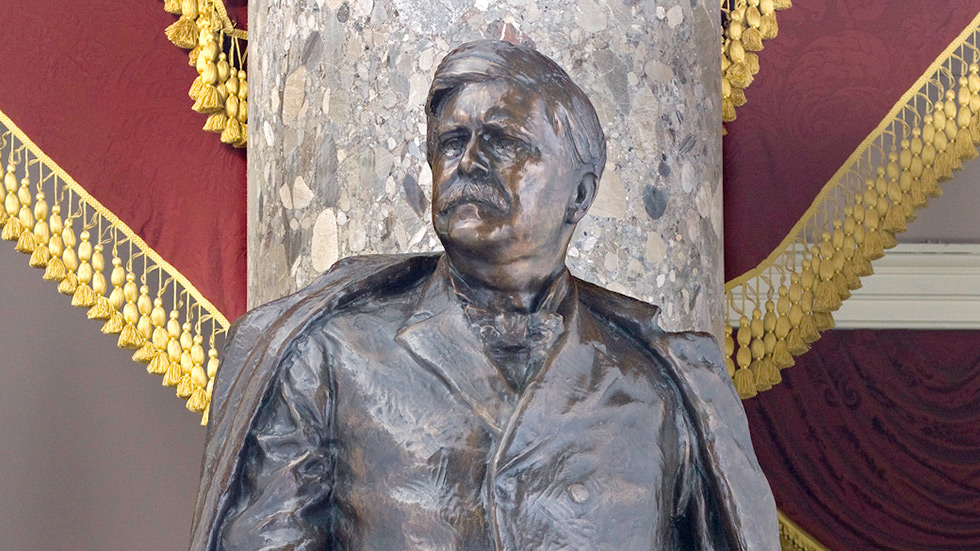 Vance served in the House of Representatives until secession, then organized and served in the Confederate Army’s Rough and Ready guards. He was elected governor of North Carolina during the Civil War, and again from 1877 to 1879. He later represented North Carolina in the Senate and advocated for rapid modernization of the Southern economy during Reconstruction.

His bronze statue was donated by North Carolina in 1916 and sits in Statuary Hall. 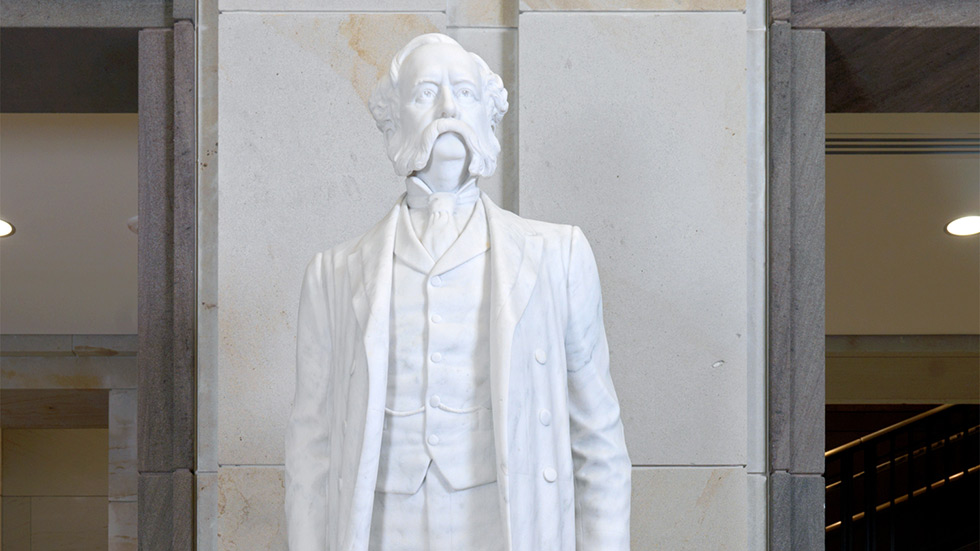 Born into a wealthy plantation-owning family, Hampton became one of the largest slaveholders in the country. He served as a general in the Confederate cavalry and was elected governor of South Carolina in 1876, supported by a paramilitary group that violently attacked black and Republican voters. Hampton later served in the Senate.

South Carolina donated Hampton’s statue in 1929. In 2008, during Pelosi’s previous stint as Speaker, Hampton’s statue was moved to a non-public area just off the House floor. It now sits in a remote area of the Capitol Visitor Center. 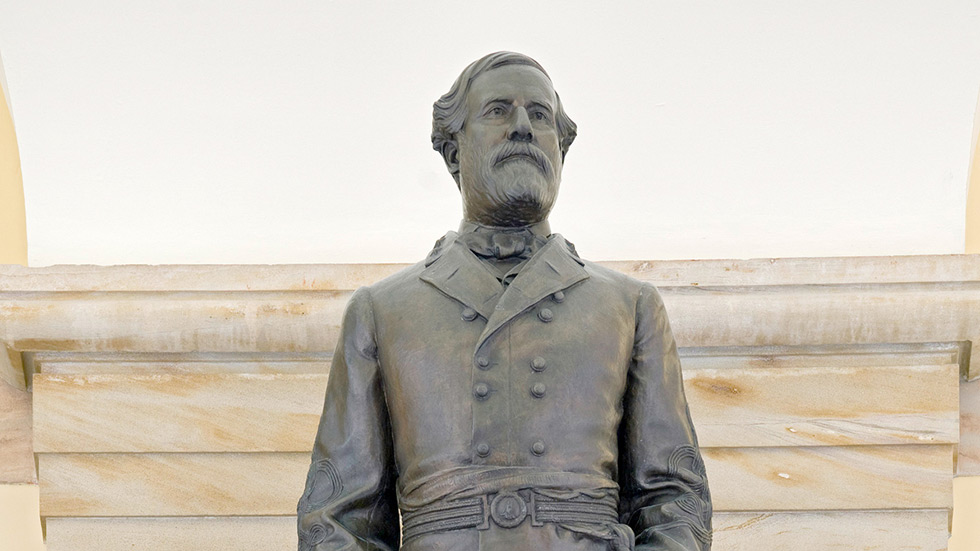 Lee, a top graduate of West Point and distinguished U.S. Army commander, chose to maintain his loyalty to his home state and resigned in 1861. He was given command of the Confederate Army of Northern Virginia and led the Confederate Army during some of the war’s major battles. He owned and managed large numbers of slaves.

Virginia donated his bronze statue in 1909. It has become one of the symbols of Democrats’ fight to remove Confederate statues. During her first tenure as Speaker, Pelosi moved Lee’s statue from Statutory Hall to the Crypt. Gov. Ralph Northam (D) requested legislation earlier this year to replace Lee’s statue. 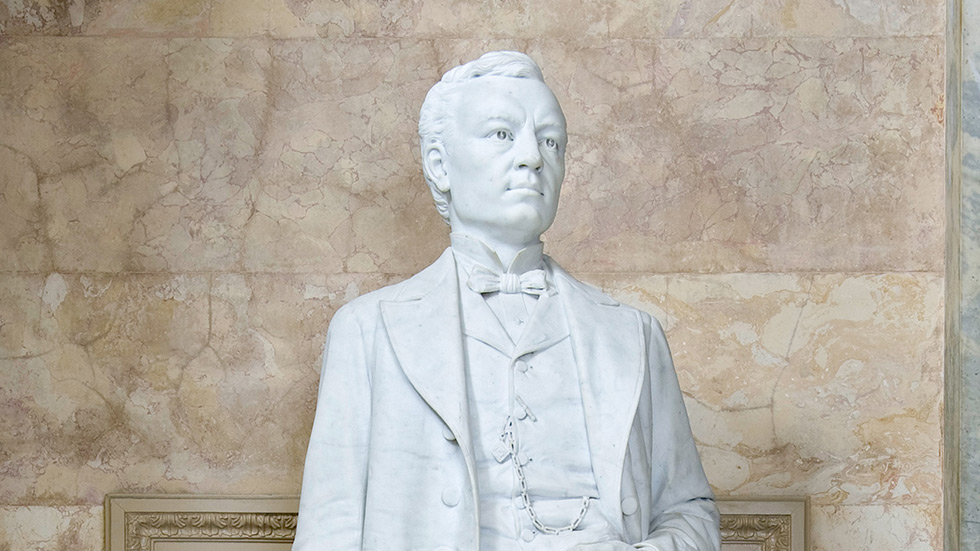 Kenna enlisted in the Confederate Army at age 16 and was wounded in battle. After the war, he became an attorney and represented West Virginia in the House. He served in the Senate from 1883 until his death in 1893, rising to Democratic minority leader.

His monument, which West Virginia donated in 1901, sits in the Hall of Columns.

All statue photos provided by the Architect of the Capitol.

What happens next after Putin’s annexations in Ukraine