In their own words: Lawmakers, staffers remember Jan. 6 insurrection

A year has passed since an angry pro-Trump mob stormed the U.S. Capitol in a failed bid to block the certification of President Biden’s 2020 election victory and keep former President Trump in power.

The unprecedented attack — the first violent transfer of power in the nation’s history — left a Capitol Police officer and four others dead; soured relations between the parties in ways that still endure; and raised questions not only about the security of the Capitol complex but the durability of American democracy.

One year after the Jan. 6 attack, here is what people saw, heard and felt in their own words. 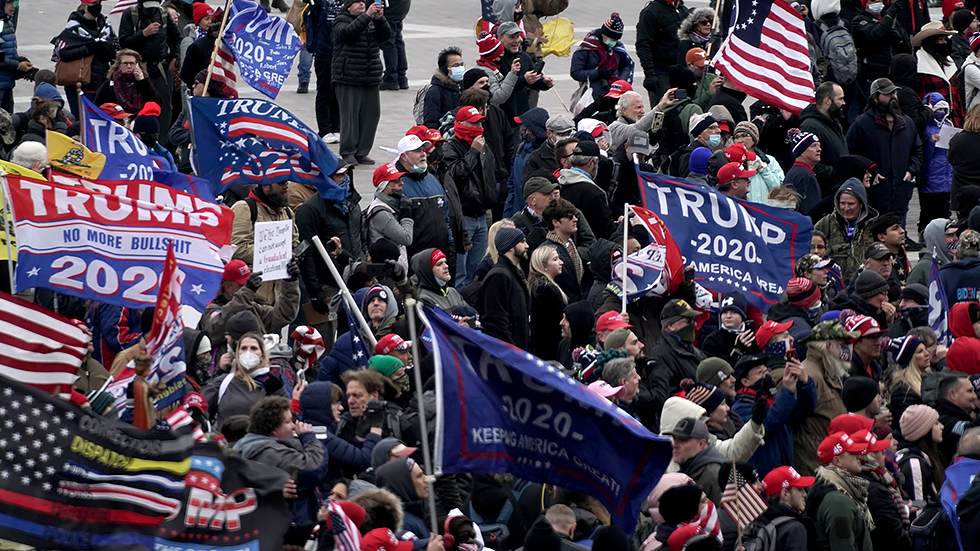 Rep. Dean Phillips (D-Minn.): “Just before 2 p.m., after receiving text messages of concern from family, Rep. Tom Malinowski [D-N.J.] and I left the certification proceedings to have a look out the windows toward the National Mall. I’ll never forget the horrifying sight of an insurrection brewing at the foot of the Capitol, the feelings of disbelief, or the sound of the U.S. Capitol Police [USCP] officer who screamed at us to stay away from the windows and return to the chamber.

“When we asked if everything was OK, she replied, ‘Of course it’s OK. You’re in the most secure building in America.’

“Within thirty minutes, our lives and our country would be forever changed.”

Rep. Tom Reed (R-N.Y.): “We will never forget the events of January 6th, 2021 as we watched in disbelief, sadness and anger as the U.S. Capitol was attacked. I was outside having just left the floor headed back to my office, and I could see and hear the mass of people coming up the National Mall. I could sense the anger and the mob mentality in the air.

“I heard what I thought was the sound of shotguns being fired, but they were actually smoke bombs and pepper balls being deployed in an attempt by the Capitol Police to hold back the mass. At this point the buildings were in lockdown and to get to the safety of my office I had to walk through the back of the office complex, showing identification along the way to be allowed back inside.

“From my office, I could see much of the events unfold on the Capitol grounds, as well as watch on TV like all other Americans. I very vividly remember watching it with tears in my eyes. It was the darkest day of my congressional career and one of the saddest as an American citizen.” 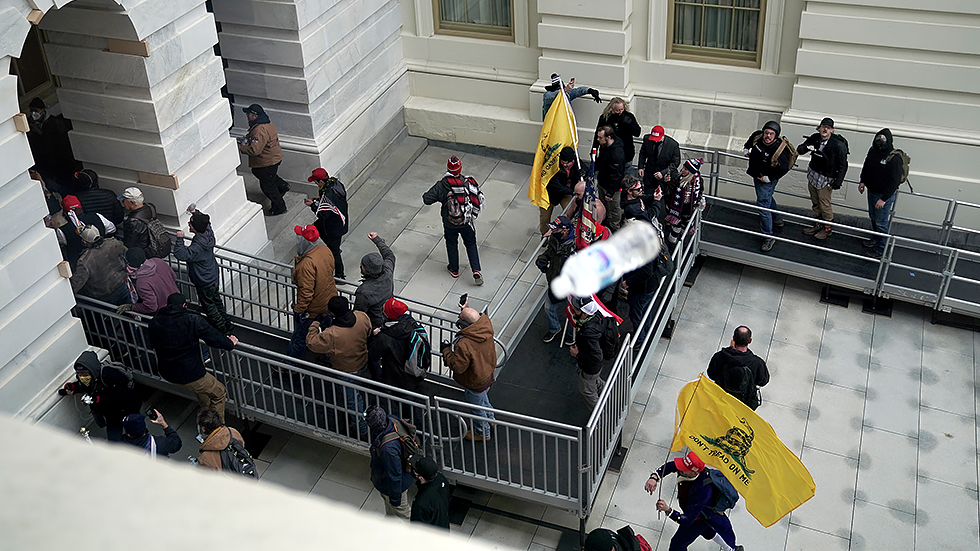 Rep. Jared Huffman (D-Calif.): “What I remember most is starting the day with a naive expectation that this would just be more MAGA political theater, and that the Capitol was such a fortress and our security was so tight that any threats would be easily dealt with. Over the course of the day, that gave way to a surreal reality — that Trump was actually inciting an attempted coup, that it was actual violence and not just theater, and that our Capitol police for some reason were not only unprepared but seemed to be standing down and allowing the mob to advance on the Capitol.

“It was reassuring to hear of their heroic efforts to hold the line in many cases, but I can’t get over the fact that this violent, armed insurrectionist mob was not confronted more forcefully early on, given that ordinarily any tourist that tried to push past police into the Capitol would be met with whatever force was necessary to stop them.”

Rep. Frederica Wilson (D-Fla.): “I voted, then decided to stay and watch the proceedings. Then I had an epiphany that said, ‘Go home, this is not safe.’ I was clearly aware of the danger and the lack of security so I called my driver and said, ‘I think I should leave. Come and get me.’ When I got outside there were these strange-looking people beginning to gather; I was scared as hell.

“They were looking at me head to toe, very menacing. They looked like they were on illegal drugs. I know they were thinking: She has on a pin … she is Black … she has to be a Democrat. So I ran to the car and we sped away. We were the last car to leave the Capitol that day. I live three minutes away. By the time I got home and turned on the TV, there were thousands climbing the walls of the Capitol.

“I was minutes away from being beaten or killed by a domestic terrorist. I can still see their eyes and the hateful way they looked at me.” 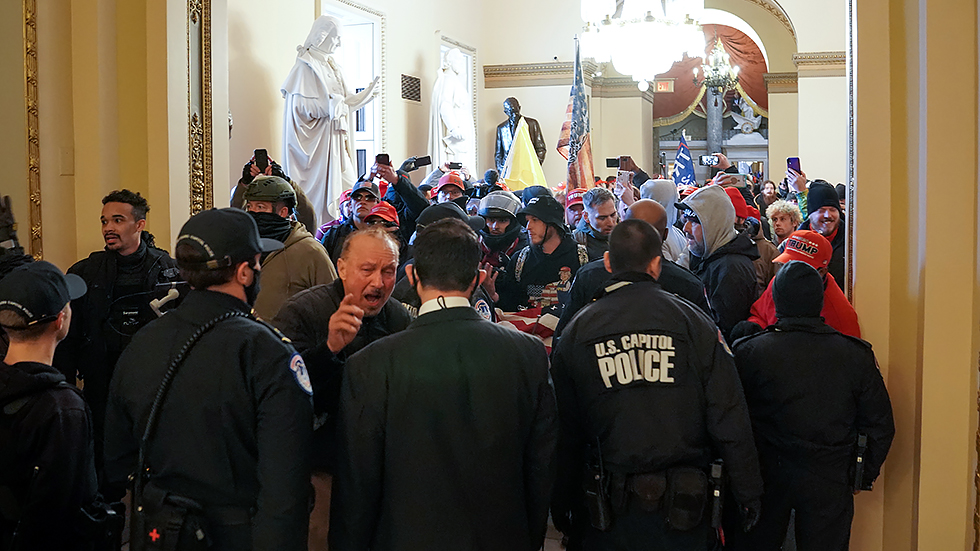 Sen. Richard Shelby (R-Ala.): “I was shocked when we realized what was going on … in the chamber. When the police, FBI, all of them rushed in and they started putting their machine gun together right there and they said, ‘get down.’ We knew it was for real then, and that was shocking. I thought this would never happen in America. …My first inkling was when the vice president came out of the chair, and we thought ‘well, maybe the president called him.’ … We were talking among ourselves, ‘what is going on,’ and then it happened not simultaneously but very quickly and it all came together.”

Rep. Raja Krishnamoorthi (D-Ill.): “[I remember] the sound of the USCP banging on my Cannon office door to evacuate me because, as I later found out, they discovered a bomb 200 feet from my office window.

“I will also never forget the rioter in a MAGA shirt sitting next to me on the 6 a.m. airplane to Chicago the next day, scrolling through pics on her phone of the inside of the Capitol.”

Rep. Tom Suozzi (D-N.Y.) was in the House gallery when the mob reached the chamber. His office pointed to a video Suozzi shot during the siege, and later tweeted, depicting the chaos of the scene just after Ashli Babbitt was fatally shot while trying to enter the Speaker’s Lobby.

Shots fired in the Capitol: something I never thought I would witness. The madness is over. The healing must now begin. pic.twitter.com/QE1GPdGF9G

Sen. John Cornyn (R-Texas): “I think in many ways it was kind of a fear of the unknown because we were isolated in the chamber. We didn’t know what was going on around us. So all of us who were here … we didn’t know what to expect. That’s, to me, the thing that stands out the most is just sort of what we didn’t know.”

“When we got to the other side, we were again told to get down on the ground. Moments later I heard a gunshot. I was so afraid that one of our officers had been shot and braced myself for more shooting. I later learned that it was one of the insurrectionists who had been shot while she was trying to make her way into the Speaker’s Lobby. That gunshot saved our lives. That officer saved our lives. I didn’t realize until I watched that video the next day just how real my fears were in that moment.”

Sen. Kevin Cramer (R-N.D.): “An officer said … ‘Come on people, we have to go faster, they’re right behind us.’ And that was pretty vivid because I never felt unsafe. But it was the first time I thought, I realized, there are actually people in here … That was sort of the turning point. And it was right about in here [in the Senate basement] because then I bumped into [New York Times reporter] Jonathan Martin. … And I said, ‘Stick with me Jonathan, stick with me.’” 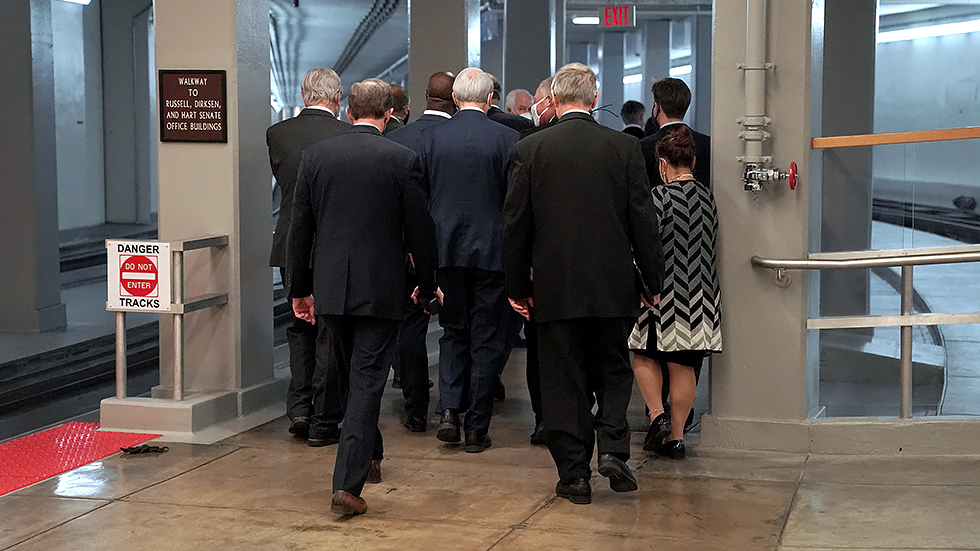 Katie Grant Drew, former communications director to House Majority Leader Steny Hoyer (D-Md.): “When I arrived at work that morning, I could see from the window of my office the mass of people gathering behind barriers on the East Front of the Capitol, growing larger and angrier by the minute. It was deeply unsettling, but we had jobs to do, and we carried on. Only a few hours later, it was a surreal sight watching the mob break through those barriers. My brain tried to justify what I was seeing — perhaps the cops were moving the barriers forward as a crowd safety measure? But they never stopped running, and I watched them sprint straight up the steps of the Capitol. It was hard to believe that the mob would actually make it into the Capitol, but we soon heard the noise of the terrorists rampaging through the Capitol. That noise will stay with me forever.

“Videos don’t do it justice. It was loud, it was angry, and it never stopped. It was difficult to tell exactly where they were, because the noise echoed off the marble and stone building all around us. Suddenly, we heard distinct, crystal-clear shouting, and we knew that not only were they in the Capitol, they were inside our office. The memory of my colleagues and I ripping desks from walls to barricade the door of the room we were hiding in will never leave me.

“Even at that most horrible moment, I was so proud of how our team banded together to protect and take care of each other.”

Rep. David Cicilline (D-R.I.), an impeachment manager: Rep. Ted Lieu (D-Calif.) “came into my office because he had been evacuated from his office building, and asked whether he could stay in our office, and we of course said yes. And as we were watching the events unfold [on TV] … and as the day went on and there were reports of injuries and a death, it was very clear to me that there was no way that we could just sort of say, ‘Well, OK, [Trump] is about to leave, just let it go.’ And I think Congressman Lieu felt the same way, and we began to work with my staff and start writing what the article of impeachment would actually look like. And that’s when we developed the idea of incitement of insurrection. …

“We’ve seen this back-sliding of democracy and attempted coups in places all over the world, but never imagined it could ever happen in the United States of America. And we were watching it unfold before our very eyes. So it was really clear to me from that very first moment that we had to do something to hold the president at the time accountable for his incitement of this violence.”

Mary Miller to skip Biden’s State of the Union

GOP critic dials up pressure on McConnell: ‘Tired of caving’