CNN cut away early from President Trump’s speech on tax reform Wednesday, breaking with other cable news and business networks.

Fox News, Fox Business, MSNBC, CNBC, Bloomberg TV, One America News and Newsmax TV all stayed with the president’s speech from a manufacturing company in Springfield, Mo., for its duration.

In staying with the speech, Fox News and MSNBC both showed what are called “triple boxes,” which dedicated more than half the screen to the president’s speech with his audio.

The remainder of the screen focused on Tropical Storm Harvey, with footage of floods, rescues and radar images of the storm over Texas and Louisiana. 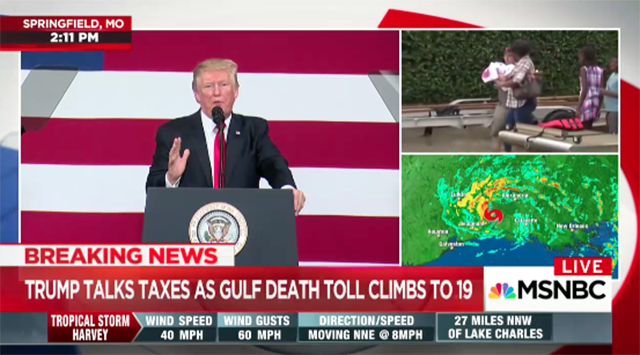 In his speech, Trump pushed for overhauling the tax code and warned lawmakers not to disappoint him after failing to repeal and replace ObamaCare.

“I am fully committed to working with Congress to get this job done,” Trump said. “And I don’t want to be disappointed by Congress.”

“I think Congress is going to make a comeback, I hope so,” he added. “The United States is counting on it. “

by Dominick Mastrangelo 1 day ago
Media  /  1 day ago
News

by Dominick Mastrangelo 1 day ago
News  /  1 day ago
Media