Matt Drudge on Ala. Senate election: ‘Luther Strange would have won’

“Luther Strange would have won in a landslide… Just too much crazy in nerve racking times,” Drudge said Tuesday night in a rare tweet. “There IS a limit!”

Luther Strange would have won in a landslide… Just too much crazy in nerve racking times. There IS a limit! pic.twitter.com/vketz7G1OR 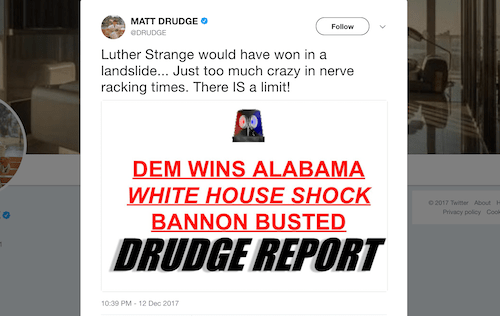 Strange was appointed to the hold seat previously held by Attorney General Jeff Sessions until the special election. He lost the GOP primary to Moore.

{mosads}Drudge has previously labeled Moore “Judge Whore” on his influential news-aggregation website after reports of sexual misconduct allegations against Moore were reported.

Moore was accused of sexual misconduct last month by multiple women, including one woman who said Moore initiated a sexual encounter with her when she was 14 years old and he was 32.

Moore denied the allegations, but he faced calls to drop out of the race from top Republicans, including Senate Majority Leader Mitch McConnell (R-Ky.), who supported Strange in the GOP primary.

President Trump threw his support behind Moore after the primary, during which he had supported Strange. In recent days, he urged his followers on Twitter to vote for Moore and held a campaign rally near the Alabama border in support of Moore.

Jones’s stunning victory tightens Republicans’ margin in the Senate, giving them just a 51-49 advantage over Democrats heading into the 2018 midterm elections.

British filmmaker says he expected Jan. 6 violence: ‘I thought it would be even worse’