Drudge: Trump loves his job, can’t wait to run for reelection in 2020

Drudge Report’s Matt Drudge said in a rare tweet Tuesday that President Trump loves his job and is “already talking about his 2020 re-election run.”

Drudge’s tweet linked to a story on The Hill detailing comments from author Michael Wolff, who said Tuesday that he believes Trump does not want to be president.

“Time to call out Michael Wolff and his fabricated bullshit!” Drudge tweeted. “I had dinner with the president a few weeks ago and he was in fine form. He was optimistic, engaged, on top of the world, loving the job.  And already talking about his 2020 re-election run!!” 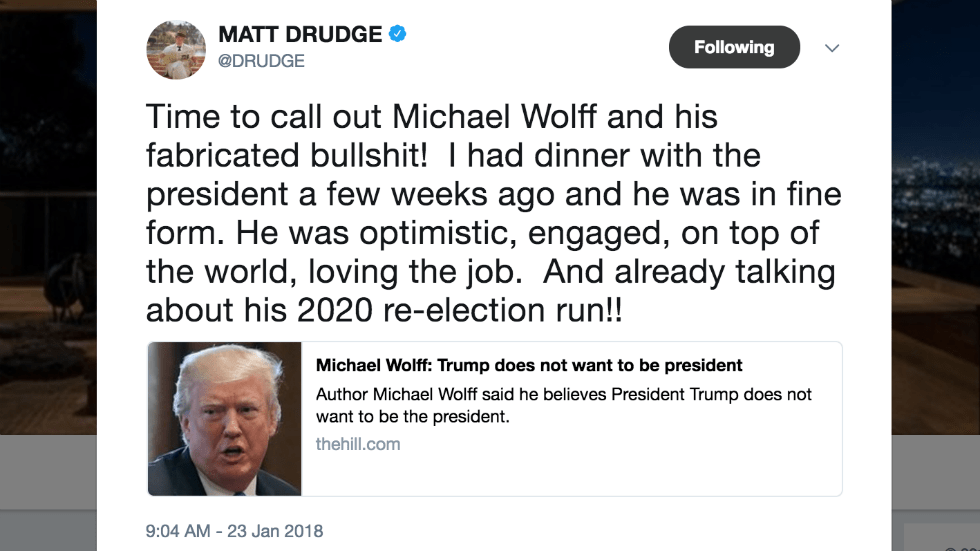 Wolff, whose explosive new book, “Fire and Fury: Inside the Trump White House,” made international headlines as controversial excerpts swept Washington earlier this month, said in an interview with the Australian Broadcasting Corporation that Trump’s identity as president is “fundamentally contradictory” with his personal identity.

“In the end, I think that the real truth is he does not want to be the president — the president of the United States,” Wolff said in the interview. “He wants to be, instead, Donald Trump.”

Excerpts from Wolff’s book have caused some to question whether Trump is mentally fit for office.

The White House has pushed back on the content of the book, calling it “pathetic.”

“There are numerous mistakes, but I’m not going to waste my time or the country’s time going page by page talking about a book that’s complete fantasy and full of tabloid gossip,” White House press secretary Sarah Huckabee Sanders said earlier this month.

Katie Couric on overturning of Roe v. Wade: ‘We’re in a s—– situation’

Jon Stewart: Supreme Court is ‘the Fox News of justice’

Alyssa Farah says she put Hutchinson in touch with Cheney

Joe Rogan: DeSantis would be a ‘good president’