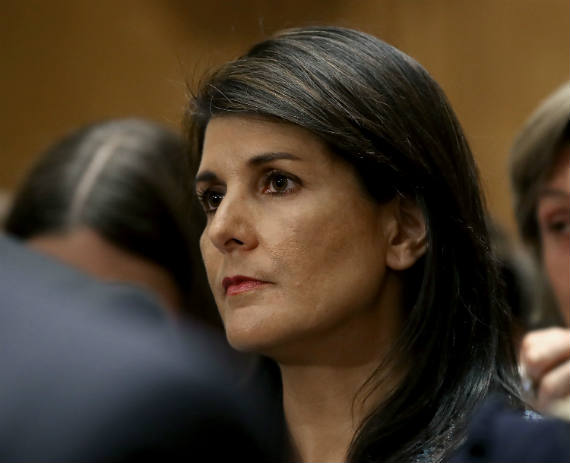 Welcome to The Hill’s Morning Report, which is replacing The Hill’s morning Tipsheet each weekday. This comprehensive morning email, reported by Jonathan Easley and Alexis Simendinger, briefs you on the most important developments in politics and what to look for in the days and weeks ahead…

The Hill’s annual 50 Most Beautiful list has been retired after nearly 15 years. A beautiful idea, whose time is up. “It’s been a great run, but all things must come to an end,” editor-in-chief Bob Cusack says.

The White House has another drama on its hands, this time raising questions about how long U.S. Ambassador to the United Nations Nikki Haley will remain in President Trump’s administration.

The dust-up was pointed and public.

Haley is a star on the right and until this weekend appeared to work effortlessly with the White House, taking on a larger role than her position would warrant in the absence of a secretary of State.

That’s changed. The White House undercut Haley after she asserted during a television appearance that the administration was poised to impose new economic sanctions on Russia. No sanctions emerged, and Trump’s team labored to explain the confusion.

National economic adviser Larry Kudlow said Tuesday that Haley “got ahead of the curve” and that “there might have been some momentary confusion about that.”

Haley wasted no words in her written reply: “With all due respect, I don’t get confused.”

Kudlow later said he was wrong to imply that Haley was confused (and apologized to the ambassador), but the mix-up over sanctions followed separate friction with Trump and the White House over a Haley aide Vice President Pence tapped to be his adviser. The president questioned the choice — the aide had been critical of Trump — and the hiring was reversed.

We’re hearing that some in Trump’s orbit are frustrated with Haley because they perceive her to be maneuvering around Trump politically and getting ahead of him on policy. To Trump’s allies, the hiring controversy looked like a strategic alliance between Pence and Haley, and a challenge to the president. Some of Trump’s backers wondered if the pair was privately plotting a Pence-Haley ticket, should Trump not seek reelection.

That kind of speculation can lead to shortened service in Trump’s world.

The Hill’s Jordan Fabian has more reporting on this here.

Rift between Haley and White House erupts over sanctions. (The New York Times)

Former first lady Barbara Bush, 92, the wife of the 41st president and mother of the 43rd, died Tuesday after a period of failing health. (The New York Times)

U.S and North Korea in `direct talks’ via Pompeo secret meeting: The two countries held “direct talks at very high levels,” Trump revealed Tuesday. CIA Director Mike Pompeo secretly met with North Korean leader Kim Jong Un at Trump’s direction over Easter weekend, The Washington Post reported. The administration has been dealing with North Korean representatives through a channel that runs between the CIA. and its North Korean counterpart, the Reconnaissance General Bureau, according to the New York Times.

Trump tweeted that the meeting went “very smoothly and a great relationship was formed.” 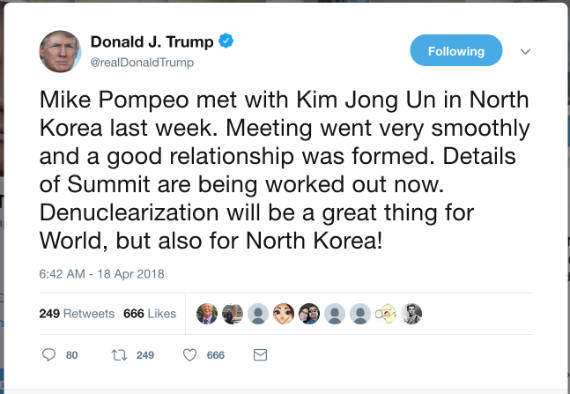 A proposed U.S.-North Korea summit could take place in early June, or not at all, Trump told reporters while hosting Japanese Prime Minister Shinzo Abe in Florida. Five possible summit locations are under discussion, none in the United States.

The president hopes a future face-to-face meeting can persuade Pyongyang to abandon its nuclear weapons program.

Abe is seeking assurances from the president that Japan will be protected in any nuclear pact that might emerge.

The prime minister and Trump continue meeting today to discuss trade issues and Japan’s purchases of U.S. military equipment. Also, “we’re going to sneak out … and play a round of golf if possible,” Trump added.

➔Trump tweets of ‘revolution’ in California over sanctuary law. 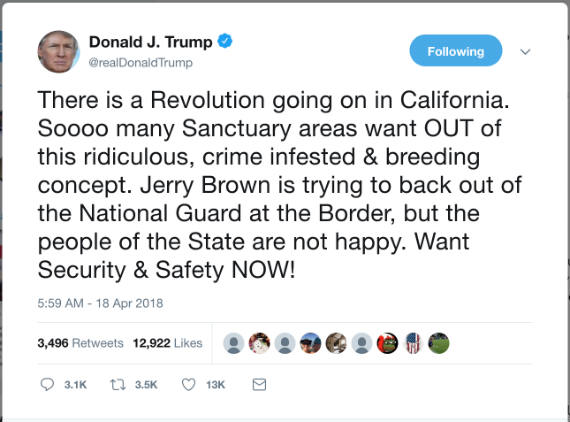 ➔ Hannity and Trump shared more than one legal adviser. If it were a novel, reviewers would reject the plot. A former adult-film actress, who says she had an affair with the president, wants the courts to release her from an agreement not to talk about it. To publicize her version of events, Stormy Daniels releases an artist’s sketch of a man she says threatened her in a Las Vegas parking lot seven years ago, asking the public to help find him.

And the president weighed in this morning on Twitter, referencing the sketch: 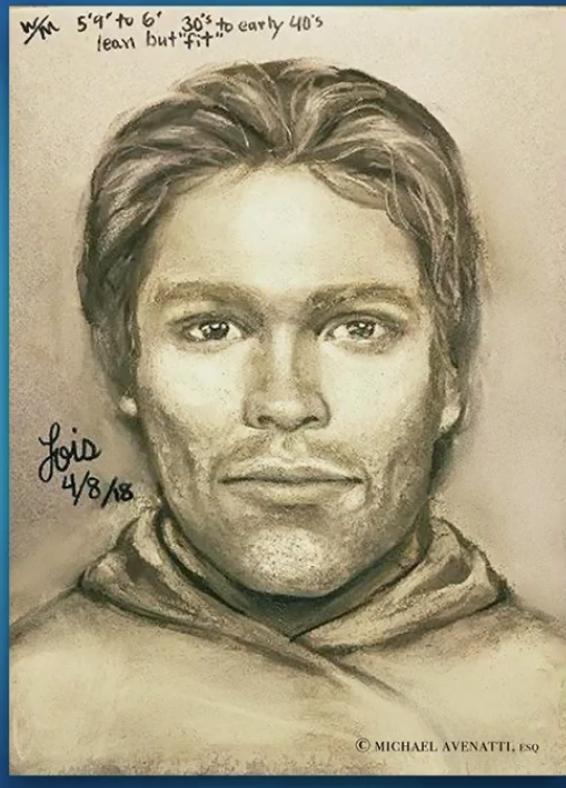 Separately, The Atlantic reports Trump and Sean Hannity are tied through additional attorney connections aside from Michael Cohen — Jay Sekulow, the president’s personal attorney in the Russia investigation, and Victoria Toensing, wife of attorney Joe diGenova, a frequent guest on Hannity’s show. Trump recently considered hiring the couple to represent his legal interests, but the president’s team decided the pair had legal “conflicts.” Fox News, via a statement, said it supports Hannity in the wake of the disclosure that Cohen claimed Hannity as a legal client, disputed by the anchor.

Next up: The government will begin the process of providing seized materials to Cohen’s team. This could take more than a week to process. Cohen’s lawyers will work with Trump’s lawyers to provide access to all the material relevant to the president for review. 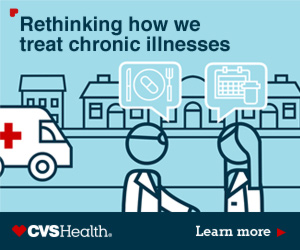 ➔ Gorsuch sides with liberals on immigration case: Ask Republicans about Trump’s greatest achievement and many will point to reliable conservative Supreme Court Associate Justice Neil Gorsuch. So it was a surprise on Tuesday when he joined the liberals in a 5-4 decision stating that a federal law that eases the deportation of immigrants convicted of crimes is unenforceable because it’s too vague.

But don’t expect conservatives to sour on Gorsuch just yet.

➔ Mark Krikorian, the executive director for the Center for Immigration Studies, which advocates for stricter immigration policies, tells us in an email:

“It doesn’t bother me much. It was a question of statutory interpretation and while I’d have preferred that he’d side with the other conservatives on the court (and the Obama administration), it’s a little early to start jumping to conclusions.”

The bottom line: The Judicial branch will not settle decades-long immigration debates. Congress will have to act with a willing president and election politics that shift the narratives — an unlikely proposition in 2018.

More on immigration: Two groups affiliated with the billionaire conservative donors Charles and David Koch have launched a seven-figure national campaign to pressure Congress to act to protect so-called Dreamers —  immigrants who came to the country illegally as minors. That’s unlikely to happen in an election year, and the Koch network, which has pledged to spend up to $400 million ahead of the midterm election, has expressed frustration that the GOP-controlled Congress is running out the clock.

➔ GOP’s Tax Day trouble: Republicans blanketed the airwaves on Tuesday to sell their tax code overhaul. Republicans are banking on the public’s embrace of tax cuts to save the GOP majority in the House.

Bad news on that front — a new NBC/Wall Street Journal poll found that only 27 percent of the public thinks the law is a good idea, down from 30 percent in January. Thirty-six percent say it’s a bad idea.

Republicans are also cheerleading about the economy, but have a few mixed messages on that front. Kudlow, a deficit hawk, attacked the Congressional Budget Office, Congress’ green eyeshades, saying the scorekeepers should never be trusted. The CBO has projected massive deficits well into the future. But the Republican chairman of the Joint Economic Committee, Rep. Erik Paulsen (R-Minn.), fired back, noting that the CBO is also projecting robust economic and job growth in the coming years. Which is it?

The Hill: Republicans are divided about bringing another tax bill to the floor because of deficit concerns. And Democrats say, “let’s see,” Reuters reports.

➔ Cabinet watch: Senate Republicans are pushing forward with a trio of Trump’s Cabinet picks, setting up high-stakes confirmation battles. Pompeo as secretary of State could see a committee vote next week. The White House on Tuesday sent the formal nomination of Gina Haspel to lead the CIA to the Senate. Also awaiting confirmation is Ronny Jackson to be secretary of Veterans Affairs (The Hill).

Meanwhile, it was another day of harsh headlines for Trump’s embattled EPA administrator Scott Pruitt. This time, critics assert he wasted taxpayer funds on a customized SUV. (The Washington Post)

➔ No vote to protect Mueller: Sen. Mitch McConnell (R-Ky.) says the Senate will not take up a bill aimed at limiting Trump’s ability to protect special counsel Robert Mueller from possible termination. (The Hill)

➔ White House turnstile: White House cybersecurity coordinator Rob Joyce has been detailed back to the NSA (The Hill). And Trump’s top energy and environment adviser Michael Catanzaro will leave next week and return to CGCN Group, the law and lobbying firm where he previously worked. (The Hill)

Chronic illness affects 1 in 2 Americans and accounts for more than 80% of all health care costs. Learn more about how we are saving lives and helping people manage their chronic conditions. Learn more.

How Washington will spend your tax dollars, by Brian Riedl, opinion contributor, The Hill. https://bit.ly/2HuUrHx

The lawmaker vs. the lawbreaker (which one do we believe?), by Bill Press, opinion contributor, The Hill. https://bit.ly/2Hw7FUE

The Senate Appropriations Subcommittee on Transportation, Housing and Urban Development and Related Agencies will hear testimony this afternoon from HUD Secretary Ben Carson, about the department’s budget request for fiscal 2019.

Vice President Pence will travel to Mar-A-Lago to participate in Trump’s bilateral meetings with Abe, and plans to return to Washington tonight.

> “Close to Home”: The third article in a five-part series by The Hill’s Rachel Roubein about how the opioid epidemic affects Americans. Presented by Partnership for Safe Medicine, read today’s installment, where Sen. Johnny Isakson (R-Ga.) opens up his family’s tragic loss. (The Hill)

> Here’s how Russian Facebook ads were able to divide voters in 2016. (Wired)

> Microsoft, Facebook and dozens of tech companies declared in a set of principles they will not help any government mount cyber attacks against “innocent civilians and enterprises from anywhere.” (Reuters)

Comedian Michelle Wolf tells The Hill’s Judy Kurtz during an interview that her performance at the April 28 White House Correspondents’ Association dinner (aka “the nerd prom”) won’t concentrate solely on Trump, who is skipping the event. He plans to hold a Michigan campaign rally that night (The Hill).

“I think it’s fair game to go after him as much as you want,” Wolf tells In The Know. “I also think there’s so much happening, and so many people to make fun of, that it would kind of be a waste to only go after him.”

Wolf appeared on “Jimmy Kimmel Live!” on Monday night and dared Trump to show up at the annual soirée (“it would be real fun”) hosted by journalists.

“Especially in late-night right now, there’s so much comedy about him. It’s kind of refreshing to hear about the other terrible things,” she told ITK with a chuckle. “I just hope people think the jokes are good.” Read more of the interview here.