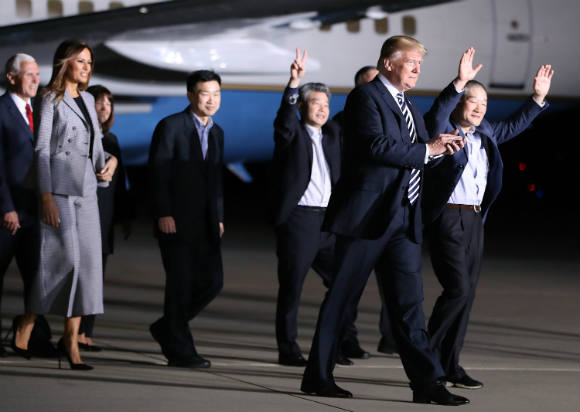 Welcome to The Hill’s Morning Report, and happy Thursday! This daily email, a successor to The Hill’s Tipsheet, is reported by Jonathan Easley and Alexis Simendinger to get you up to speed on the most important developments in politics and policy, plus trends to watch. (CLICK HERE to subscribe!)

President Trump greeted three Americans, who had been detained in North Korea, at Andrews Air Force Base outside Washington early this morning in a dramatic moment that marks a high point for his administration (The Hill).

The release of Kim Sang Duk, Kim Dong Chul and Kim Hak Song was billed as a gesture of goodwill by North Korean leader Kim Jong Un ahead of a potentially historic summit between Trump and Kim.

The released men stepped off their airplane shortly after 3 a.m., smiling, raising their arms and making the peace sign as Trump and first lady Melania Trump clapped and shook their hands.

“It was a very important thing to all of us to be able to get these three great people out,” Trump said.

The president said the time and place for his meeting with Kim will be announced within the next 48 hours. Multiple news outlets have reported that it will take place in Singapore, likely in June. For the first time, the North Korean leader publicly acknowledged the upcoming summit, calling it a “historic meeting”  and a “positive development.”

Trump has said his goal with North Korea is to open a dialogue that can achieve complete, verifiable denuclearization. If he thinks the North Koreans are acting in bad faith, he’s vowed to walk out or cancel a meeting.

“My proudest achievement will be — this is a part of it, but it will be when we denuclearize that entire peninsula,” Trump said on the tarmac, accompanied by Vice President Pence and Secretary of State Mike Pompeo. “This is what people have been waiting for for a long time. Nobody thought we could be on this track in terms of the speed.”

The release of the American prisoners — coupled with Kim’s remarks about shutting down some nuclear sites and opening his arsenal to inspectors — moves Trump and Kim closer to their planned meeting.

“Hopefully everything is going to work out at the highest level,” Trump said. “We want to thank Kim Jong Un, who really was excellent to these three incredible people.”

The president would not say if he had spoken with the North Korean leader, whom he once mocked as “Rocket Man.” Today, Trump interpreted Kim’s actions in advance of their meeting with optimism: “I think he did this because I really think he wants to do something and bring that country into the real world. I really believe that.”

Trump also praised the American detainee who returned to the United States in June and died soon after. College student Otto Warmbier, imprisoned by the North Koreans for a year, was released in a coma.

“I want to pay my warmest respects to the parents of Otto Warmbier, who was a great young man who who really suffered. And his parents have become friends of ours,” Trump said.

“We are happy for the hostages and their families,” Warmbier’s parents said in a statement. “We miss Otto.” 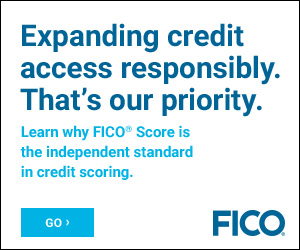 CIA: Gina Haspel, the veteran CIA officer nominated by Trump to lead the spy agency, said Wednesday she would not revive a brutal detention and interrogation program, even if ordered to do so by the president (The Hill).

Immigration: A group of Republican lawmakers in the House filed a discharge petition to force consideration of an immigration measure (The Hill).

If all Democrats signed the petition, it would need signatures from 25 Republicans to succeed (The Hill).

House GOP leaders moved quickly to try to extinguish Republican support for the move (The Hill).

We are hearing more Republicans will defy Speaker Paul Ryan (R-Wis.) and his deputies and sign the discharge petition.

The Hill: Tensions on immigration erupt in House GOP.

DOJ/Prisons: The House Judiciary Committee approved a bill backed by the White House to incentive prison programs that discourage inmates from reoffending after incarceration (The Hill).

Net neutrality: Senate Democrats formally launched their push for a floor vote on restoring net neutrality protections (The Hill). The FCC voted in December to repeal the Obama-era net neutrality rules on the grounds that they harm innovation. Democratic candidates want to champion their opposition during the election season.

Cybersecurity: The House Foreign Affairs Committee approved a bipartisan bill that would incentivize “ethical” hackers to hunt for vulnerabilities in the State Department’s digital systems (The Hill).

Farm bill: The president is not going to issue a veto threat of a House farm bill over work requirement provisions for food stamp recipients, Trump’s legislative affairs director clarified, responding to a Wall Street Journal report (The Hill).

A message from FICO:

With FICO, you know the score. Our decades-long commitment to high standards and proven practices makes FICO® Score the industry’s most trusted credit score. While others move to weaken standards to sell more scores, FICO is helping lenders expand homeownership responsibly while reducing risk in our system. Read more.

➔ CAMPAIGNS:  ***SHOCK POLL*** A new survey from CNN finds the Democratic advantage in the House generic ballot has all but vanished, reduced from 16 points in February to only 3 now.

Democrats aren’t panicking yet. Pollster John Anzalone tells us the party is holding steady at 7 points in the FiveThirtyEight aggregate. He said the over performances by Democrats in special elections this cycle are the “bellwether signals about 2018.”

But Democratic pollster Celinda Lake told us that there are signs the GOP is closing in, particularly in battleground states, where the president’s supporters are sticking with him and matching liberal energy on the ground. She said a “blue swell” exists but that it will “take a lot of work” to turn that into a blue wave.

“Our Achilles heel is that Democrats also have to gain some advantage on the economy. We remain behind and Trump’s initiatives on [the North American Free Trade Agreement], trade, infrastructure reinforce that brand. Among independent voters, Democrats are still double digits behind (on those issues).” – Lake.

On that front, Democrats got some good news on Wednesday from a Monmouth University survey that found only 12 percent of Americans say their family has benefited a great deal from the economic upturn.

“We continually see national economic indicators hitting new marks, such as last week’s news of the lowest unemployment rate in 18 years. And yet very few Americans feel like they are reaping the benefits.” — Monmouth pollster Patrick Murray.

The Hill (opinion): Sanity prevails for both parties in primaries.

The Hill (opinion): Blue wave? Not so fast.

➔ Investigations: It was a confusing day on the legal front for Trump’s attorney Michael Cohen, whose private business deals are under investigation by the U.S. attorney’s office in the Southern District of New York.

There was a flood of stories about large payments Cohen received from corporations eager to get close to Trump, including one investment firm whose biggest client is a company controlled by a Russian oligarch.

The Hill’s Niall Stanage has the only story you need to read to tie all of these threads together. Niall talked to Michael Avenatti, the lawyer for adult-film actress Stormy Daniels, who has become an all-purpose legal agitator against the White House.

“It’s beyond that it doesn’t look good. This is the right-hand attorney of the president. If that attorney is selling access to the president without the requisite disclosures, that is a serious problem.” — Avenatti.

But some legal experts urged caution:

“We need to be a little conservative in crying from the rooftops that there is criminal activity here. It seems swampy but I don’t know if I would use the word ‘criminal.’” — Attorney Caroline Polisi.

Trump’s attorney Rudy Giuliani told Bloomberg that the president did not know about Cohen’s consulting business.

But Avenatti knew about the payments because he somehow obtained Cohen’s bank records, leading to this interesting development:

Avenatti, who seems to have a permanent seat reserved for him on cable news sets, has talked about how his ubiquitous media profile has encouraged information-sharing. 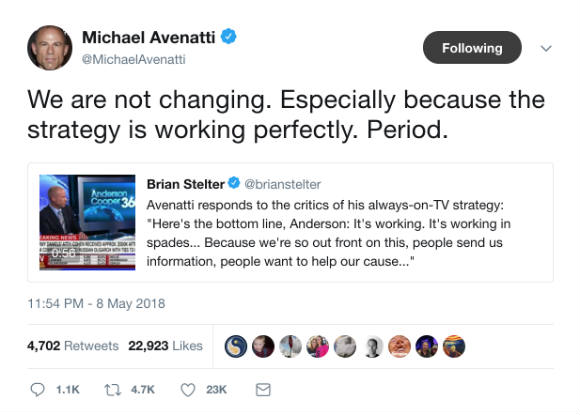 STAT News: Cohen pitched himself as fixer to Novartis and received $1.2 million.

➔  NEWS MEDIA:  The war between the White House and the media had cooled off since the White House Correspondents’ Association (WHCA) dinner debacle last month, but returned with a vengeance on Wednesday after Trump tweeted a veiled threat about suspending press credentials. 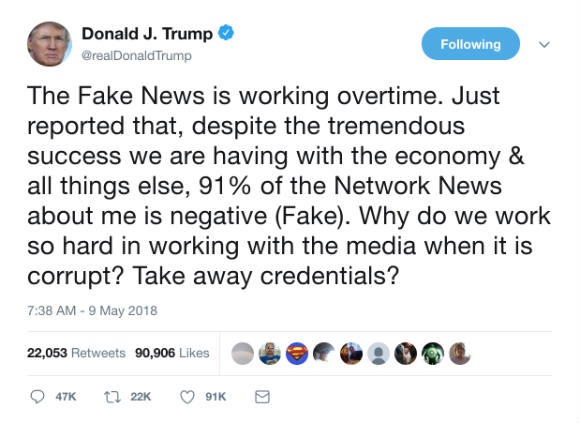 The president is likely to take his complaints no further than Twitter: Since arriving in the Oval Office, his White House communications team has mulled all manner of restrictions, from ending the press briefings altogether to moving the White House press corps some distance from 1600 Pennsylvania Ave.

The result: Occasional restrictions to bar cameras during some briefings. That was when Sean Spicer was press secretary and his daily clashes with journalists were so over the top, he became comedy fodder for “Saturday Night Live.”

The WHCA responded to Trump’s Wednesday threat with a blistering retort:

“A president preventing a free and independent press from covering the workings of our republic would be an unconscionable assault on the First Amendment.” — Margaret Talev, WHCA president.

Press secretary Sarah Huckabee Sanders was not amused yesterday when asked to explain Trump’s Twitter broadside about credentials. As evidence of a hostile press corps, she skewered two recent stories — a New York Times article suggesting Secretary of State Mike Pompeo had gone missing at a key moment  when he was actually on his way to North Korea to free U.S. detainees — and Washington Post coverage that said first lady Melania Trump is frequently apart from her husband.

Sanders: “There is a responsibility by you guys to provide accurate information.”

CNN (analysis): Trump is seen by many as untruthful and also perceived as “authentic.” A study published in the American Sociological Review suggests that some of the most prevalent, elite analysis of that dynamic could be missing the mark.

The Senate convenes at 10 a.m. and proceeds to executive session to resume consideration of the nomination of Michael B. Brennan to be United States circuit judge for the 7th Circuit.

The president flies to South Bend, Ind., where he and Hoosier VP Mike Pence will hold a reelection rally.

For inflation watchers, the Bureau of Labor Statistics may offer key new information at 8:30 a.m.: the consumer price index and real earnings, both for April.

> More than 15 Native American tribes filed lawsuits against opioid manufacturers and distributors, and more such suits are expected soon. Native Americans are joining a long list of stricken cities, counties and other stakeholders suing to recoup money spent fighting the opioid epidemic, hoping to drive reforms, by Rachel Roubein (The Hill).

The art of politics (or no good deed goes unpunished): Poland’s culture minister this week survived a no-confidence vote after being accused of wastefully spending $120 million in public funds to secure an art collection that included Leonardo da Vinci’s “Lady with an Ermine.” Da Vinci’s portrait of Cecilia Gallerani, the young lover of his boss, is one of only four portraits of women created by da Vinci.

In 2016, Piotr Glinski purchased an art collection his countrymen argued was always secured in Poland, but he maintained he settled ownership once and for all. The masterpiece now hangs in the National Museum in Kraków. 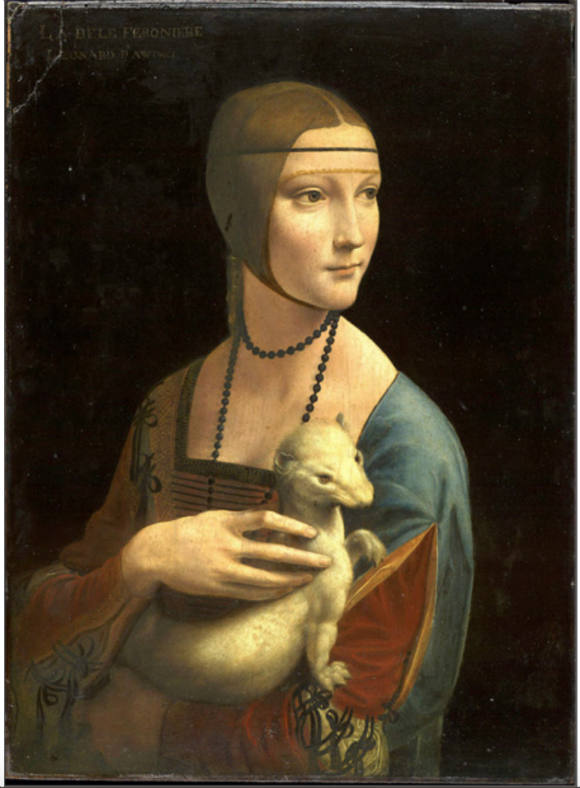