The Hill’s Morning Report — Historic vote on Kavanaugh to come amid protests, anger

A procedural vote to end debate on President Trump’s nomination of Brett Kavanaugh to the Supreme Court will take place at 10:30 a.m.

If Kavanaugh passes that procedural hurdle, a final floor vote could take place as soon as Saturday.

The Associated Press: Sen. Steve Daines (R-Mont.) will be at his daughter’s wedding this weekend whether there’s a vote or not.

If Daines misses the confirmation vote, than Republicans can’t afford any defections if all Democrats vote no.

Republicans are publicly expressing confidence, but they don’t have the votes yet and the situation is volatile after another chaotic and emotionally draining day on Capitol Hill.

Writing in a Wall Street Journal op-ed that ran last night, Kavanaugh defended his reputation, but also acknowledged that he said things “I should not have said” in emotional public testimony last week.

Kavanaugh: I am an independent, impartial judge.

The Washington Post (editorial board): Vote no on Kavanaugh.

There appeared to be some positive movement for the GOP on Thursday after lawmakers viewed the supplemental background check the FBI conducted into allegations made by Christine Blasey Ford, who has accused Kavanaugh of sexually assaulting her when the two were in high school in 1982.

There doesn’t appear to be any new bombshell revelations or smoking gun corroborations of Ford’s testimony in the FBI report. Flake and Collins left a briefing on the report signaling they were satisfied with the FBI’s work.

“It appears to be a very thorough investigation.” – Collins

The Hill: Kavanaugh’s path to nomination begins to solidify.

Murkowski and Manchin, who were hounded on Thursday by reporters and protesters alike, spent several hours meeting with sexual assault survivors but did not give an indication as to how they might vote.

In addition to the soul searching, Manchin has political concerns to consider as he seeks reelection in a state Trump carried by more than 40 points in 2016.

Another red-state Democrat up for reelection this year, Sen. Heidi Heitkamp (D-N.D.), announced Thursday that she’d vote against Kavanaugh.

That’s a massive political gamble for Heitkamp in a state Trump carried by more than 30 points in 2016. Two recent polls show Heitkamp has fallen behind Rep. Kevin Cramer (R) by double digits in her reelection bid.

“[The Kavanaugh hearings] proved to be perhaps the greatest political gift I’ve received in some time.” – Cramer

The Hill’s Reid Wilson has a scoop on that race:

“The National Republican Senatorial Committee has canceled some of its advertising buys in North Dakota, a sign of confidence that Cramer has pulled sufficiently ahead of Heitkamp.”

Protesters swarmed the Hart Senate Office Building. More than 300 people were arrested. And in dozens of cities across the country, anti-Kavanaugh protesters laid in the streets spelling out “stop” with their bodies.

The Associated Press: Day of chaos and consequence before vote on Kavanaugh.
The Hill: Scores of Kavanaugh protesters arrested after descending on Senate building.

Senators gave passionate speeches for and against Kavanaugh or lamented a breakdown in process in the upper chamber.

Furious Democrats accused Republicans of interfering to limit the scope of the FBI’s investigation, describing the process as “bullshit” or “a cover-up” or a “sham.” 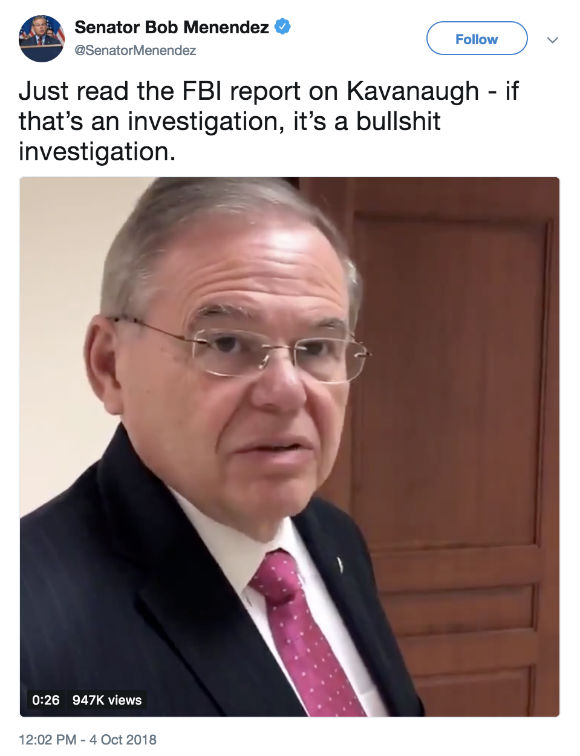 Republicans claimed that the FBI report cleared Kavanaugh of wrongdoing and fumed over what they described as character assassination of the judge by Democrats and the media.

“Our society is not a place where uncorroborated allegations of misconduct from nearly 40 years ago, allegations which are vigorously disputed can nullify someone’s career or destroy their reputation. Is that what the Senate is going to be known for?” – Senate Majority Leader Mitch McConnell (R-Ky.)

“That’s a bias that none of you should be proud of.” – Senate Judiciary Chairman Chuck Grassley (R-Iowa) to reporters

The weekend vote, if it happens, would bring a close to one of the most bitter and polarizing political fights in the modern era. A cloud will hang over Kavanaugh, the Supreme Court and the U.S. Senate for some time.

The political ramifications, with the midterm elections one month away, are unknown. Many analysts believe the House majority is a lost cause for Republicans but there is a growing sense on the right that the Kavanaugh saga has energized conservatives and will help Republicans preserve their majority in the Senate.

“Look at the polls over the last three or four days and it shows [Democrats’] rage-fueled resistance is starting to backfire at a level that nobody has ever seen before.” – Trump at a rally last night in Minnesota

Katherine Miller: The Kavanaugh situation has opened up a portal in everyone’s memory.

Sohrab Ahmari: Democratic smears against Kavanaugh have reunited the right.

Victor Davis Hanson: The polarizing atmosphere of the university has spread to Congress.

The National Review: Do the right thing, Jeff Flake.

Former Justice John Paul Stevens: Kavanaugh does not belong on the court.

Bret Stephens: For once, I’m grateful for Trump.

CAMPAIGNS & POLITICS: Trump will campaign in Topeka this weekend for Republican Kris Kobach, who is running in a dead heat with Democrat Laura Kelly for Kansas governor.

The latest Emerson College survey finds Kobach at 37 percent support and Kelly at 36 percent, with independent Greg Orman at 9 percent and 15 percent of voters undecided.

The president’s heavy campaign schedule continues next week with stops in Iowa and Pennsylvania.

There are a handful of endangered Republican House members in those states, including three open races in Pennsylvania for seats presently held by Republicans that The Cook Political Report has rated as either “likely Democratic” or “leans Democratic.”

The Republicans who face uncertain reelection prospects, according to Cook:

However, Cook finds the GOP’s fortunes improving in some Senate races: 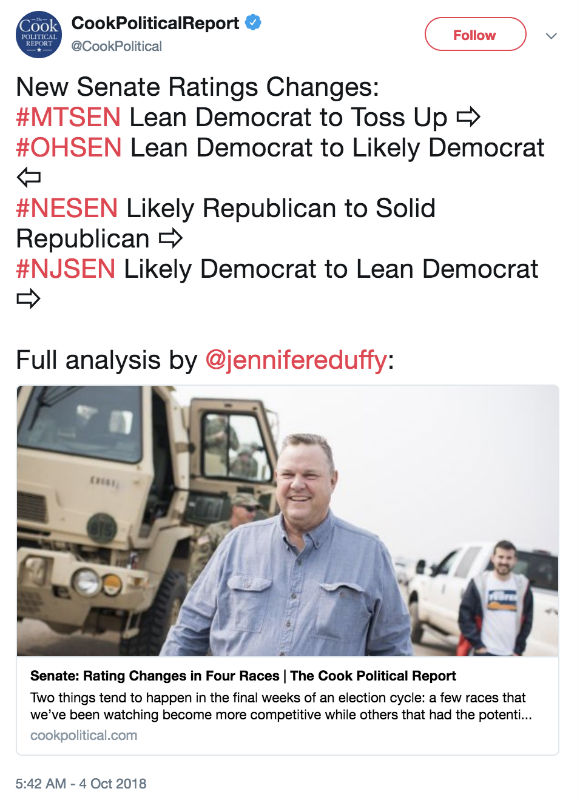 Emily Badger: Estranged in America: Both sides feel left out.

Maya Kosoff: Will anti-Trump millennials actually turn up to vote?

Salena Zito: Red ripples amid talk of a blue wave.

Noah Millman : Sen. Elizabeth Warren (D-Mass.) is the best bet for Democrats in 2020.

➔  WHITE HOUSE & ADMINISTRATION: Tensions between the U.S. and Russia and China are running hot.

> The Trump administration on Thursday indicted seven Russian intelligence officers, alleging that they participated in a global hacking campaign against the U.S. and its allies (The Hill).

The accused Russians, who work for the GRU, Russia’s military intelligence unit, are outside of U.S. jurisdiction and unlikely to ever see the inside of an American courtroom.

Earlier this year, special counsel Robert Mueller indicted 12 GRU officers for their involvement in malicious cyber operations around the 2016 presidential election, including three who were indicted on Thursday.

“Make no mistake: The current situation, with Russia in blatant violation of this treaty, is untenable.” – Mattis

> In a speech to the Hudson Institute, Vice President Pence accused China of a “malign” campaign to undermine Trump and of meddling in the midterm elections with the aim of electing Democrats.

From Jordan Fabian and Morgan Chalfant (The Hill):

“Pence’s remarks come as U.S. officials, including Trump himself, have ramped up their rhetoric against what they say are Chinese efforts to undermine American businesses, provoke the U.S. military and develop a sophisticated election-meddling campaign similar to what Russia carried out in the 2016 election.”

> And fallout from The New York Times report on the president’s finances, which alleged that Trump and his father Fred Trump earned their wealth through questionable business practices and tax strategies:

More from the White House … The administration is pushing to ease the roll-out of driverless cars and trucks (The Washington Post) … Treasury slaps new financial sanctions on groups with ties to North Korea, Hezbollah (The Hill) … Interior Department implements new science policy (The Hill) … Trump immigration measures struggle in courts (The Hill).

> American statesmanship is not dead, by Glenn Nye, opinion contributor, The Hill. http://bit.ly/2BWO4cY

The House is in recess and will reconvene on Nov. 13.

The Senate will vote to end debate on Kavanaugh’s nomination at 10:30 a.m.

The president participates in a Defense Industrial Base Report presentation from the Oval Office and will sign the FAA Reauthorization Act of 2018.

> With sports gambling legal, some are betting on a new kind of fan experience (The Washington Post). 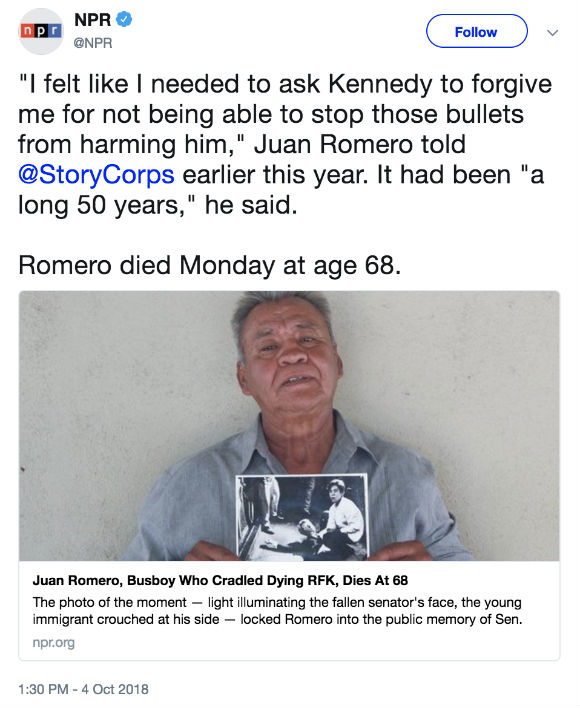 The Nobel Peace Prize was awarded this morning to Congolese doctor Denis Mukwege and Iraqi human rights activist Nadia Murad, a former prisoner of the Islamic State, for their work to eliminate sexual violence as a weapon of war. 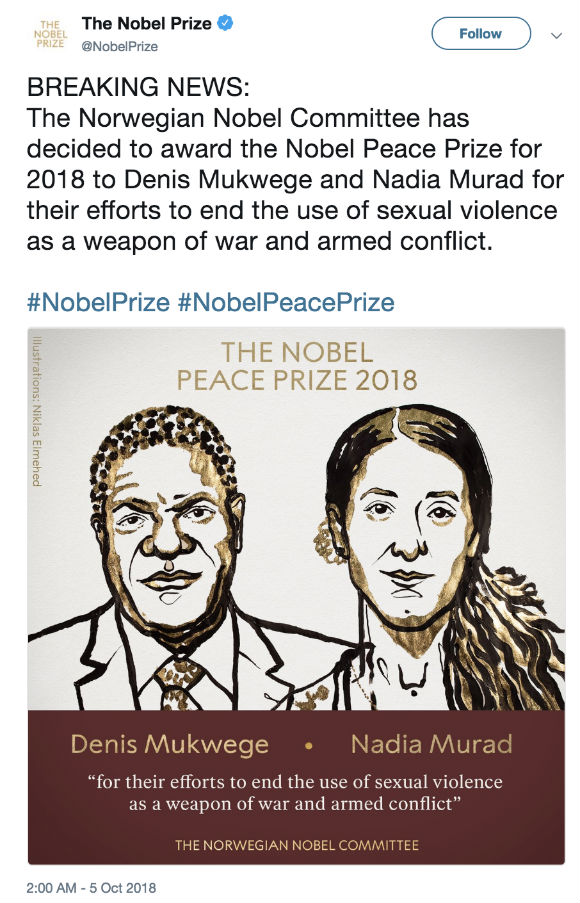 They answered correctly that Polish scientist Marie Curie is the only woman to have won a Nobel twice. Curie won the prize for physics in 1903 for a study on spontaneous radiation and she won the award for chemistry in 1911 for her work on radioactivity.

Jean-Paul Sartre was the existentialist writer who turned down a Nobel prize in literature, saying he didn’t want to be associated with any institution, no matter how noble. 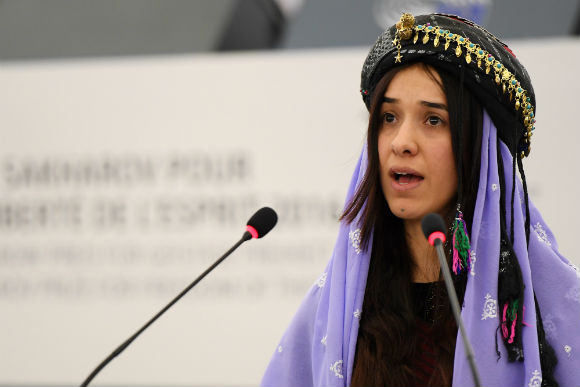