The Hill’s Morning Report — Pelosi to reclaim Speakership amid shutdown

The 116th Congress convenes today, with Democrats taking a majority in the House amid a partial government shutdown that enters its 13th day.

Democrats last had a majority in the House in 2010, when Rep. Nancy Pelosi (D-Calif.) was the Speaker. Lawmakers will vote today to make Pelosi the Speaker of the House for a second time, making her the first and only woman to hold that position.

The Hill: Pelosi to make history with second Speakership.

The New York Times: Pelosi, icon of female power, to seal her place in history.

Meanwhile, newly-elected lawmakers will be sworn in across both chambers of Congress, even as a quarter of the government remains closed over a spending fight centered around President Trump’s demand that appropriators allocate $5.7 billion for a wall along the southern border.

> One hundred new House members will be seated. Sixty-three of those are Democrats, who will have a 235-199 majority, with one seat in North Carolina remaining vacant amid allegations of election fraud.

> Eight new members will be sworn into the Senate, where Republicans will expand their majority from 51-49 to 53-47.

One of the first things Pelosi will do as Speaker is bring two spending bills to the floor for a vote. The Democratic legislation would fully fund the government, but will not include the money Trump wants for the border wall, effectively rendering it dead-on-arrival.

Senate Majority Leader Mitch McConnell (R-Ky.) said Wednesday that his chamber will not take up the legislation, calling it a “total non-starter.”

“We’re not interested in having show-votes in the Senate.” – McConnell

In an interview that will air this morning on NBC’s “Today,” Pelosi will tell Savannah Guthrie that Democrats will not budge on money for the border wall.

Guthrie: “Are you willing to come up and give him some of this money for the wall?”

Those remarks came after Pelosi and other top Democrats visited the White House for a briefing in the Situation Room on border security.

The meeting did not bring the parties any closer to a resolution that might reopen the shuttered portions of the government, although Trump has invited congressional leaders back to the White House on Friday for another round of talks.

The Hill: Democratic leaders face backlash if they compromise on wall.

McConnell said he’s hopeful the two sides can reach a deal, but that it might take “weeks.”

While Congress has largely been out of town for the 13 days of the shutdown, pressure will grow if the impasse continues.

Here are the kinds of headlines you can expect to read with increasing frequency as the shutdown drags on:

The Associated Press: Zoo animals still need to be fed during shutdown.

Kansas City Business Journal: The IRS operation in Kansas City, with about 4,600 local employees, will be heavily hit.

Indiana News and Tribune: In Southern Indiana, shutdown’s impact struck a blow to employees of the U.S. Census Bureau.

House rank-and-file progressives — including New York’s Rep.-elect Alexandria Ocasio-Cortez, who has her own bully pulpit as a freshman Democratic lawmaker — oppose the Pelosi-backed rules package (The Hill).

Republican Rep. Tom Reed of New York said he’d support the rules package, an unusual move for a lawmaker in the minority party. 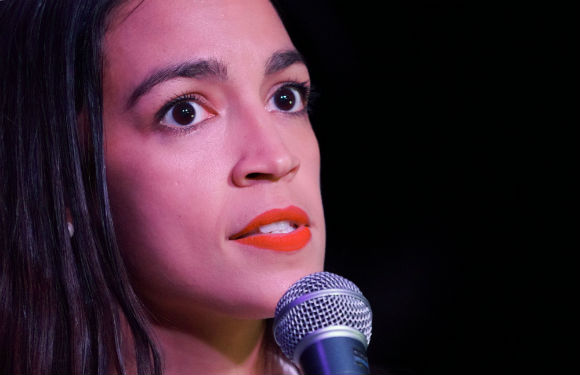 The Congressional Hispanic Caucus grows to 37 House members today, the largest such caucus in history (The Hill).

House Democrats plan a floor vote next week on whether to formally intervene in court to defend the Affordable Care Act. That’s in addition to a similar but separate vote expected today, which is included as part of a larger package of rules assembled for the new session of Congress (The Hill).

The Senate Judiciary Committee, controlled by Republicans in 2019, announced a confirmation hearing for William Barr, nominated by Trump to succeed Jeff Sessions as attorney general, will begin on Jan. 15 (The Hill).

Will Pelosi really open the floor to bipartisan ideas, as she pledged? (The New York Times)

POLITICS: Sen.-elect Mitt Romney (R-Utah), who will be sworn in today, announced his presence in Washington with a blistering Washington Post op-ed in which he criticized the president’s character and integrity.

Romney, the GOP presidential nominee from 2012, appears poised to take the torch from departed GOP Trump critics in the Senate, such as retiring Sens. Jeff Flake (Ariz.) and Bob Corker (Tenn.).

The Hill: Romney writes new chapter in his like-hate relationship with Trump. 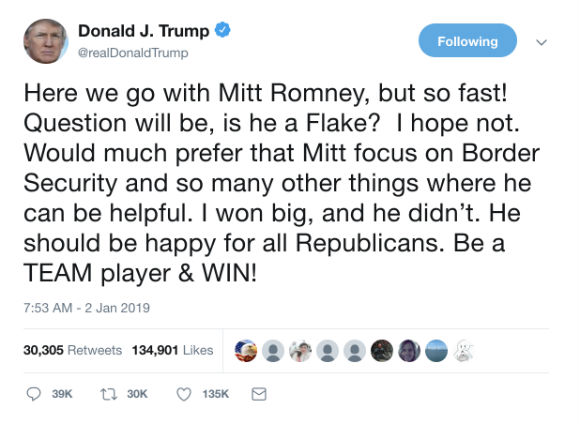 Romney also angered his niece, Ronna Romney McDaniel, who is the chairwoman of the Republican National Committee. 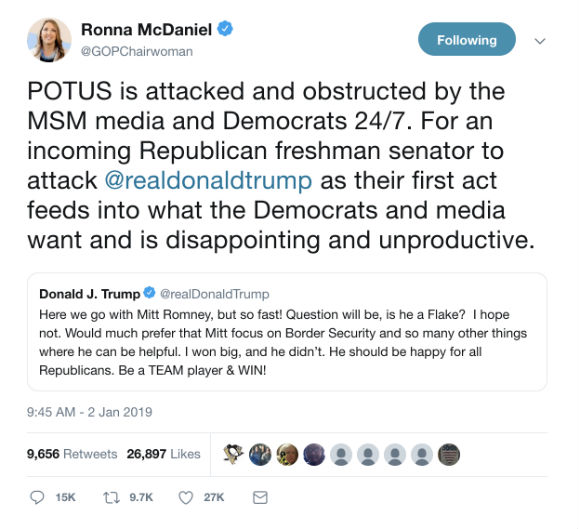 The feud set off speculation in Washington that Romney might launch a primary challenge to Trump in 2020. The Washington Post reported that GOP donors have been calling Romney and pleading with him to run.

In an interview with CNN, Romney said he would not run for president again but he also declined to endorse Trump for reelection.

“I think it’s early to make that decision, and I want to see what the alternatives are. I pointed out there are places [Trump and I] agree on a whole series of policy fronts, but there are places that I think the president can, if you will, elevate his game and help bring us together as a nation.” – Romney

Sen. Rand Paul (R-Ky.) fired back at Romney, arguing that it’s Trump’s Republican Party now and that there’s no appetite among GOP primary voters for an alternative.

“I think this is bad for the Republican Party, really bad for any kind of ability to work together in the Senate to get things done.” – Paul 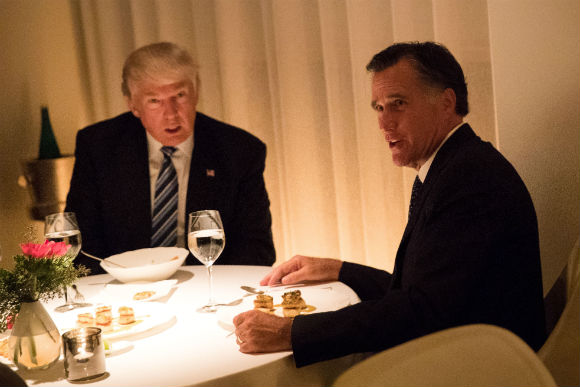 > Meanwhile, on the Democratic side, there will be a competitive primary and potentially dozens of candidates vying for the party’s presidential nomination.

Reid Wilson has an explainer here on what it means when a candidate launches an exploratory committee, as Sen. Elizabeth Warren (D-Mass.) and former Housing and Urban Development Secretary Julián Castro have done (The Hill).

Castro will officially announce his plans during a press conference scheduled in San Antonio for Jan. 12.

Warren will campaign in four cities in Iowa this weekend and is fundraising off a story in Politico in which some Democrats questioned her “likeability.”

“We’re used to being compared to any woman who’s ever lost an election, and we’re used to the anonymous, angsty quotes from ‘concerned’ insiders, and the she-can-never-win garbage churned out by the Republican propaganda machine and recycled by the media. And you know what? We’re also used to proving them all wrong.” – Warren fundraising email

More from the Democratic primary … Aides say they experienced sexism from officials in Sanders’s 2016 presidential campaign (The New York Times) … Washington Gov. Jay Inslee (D) bets he can win the presidency on the basis of his positions on climate change (The Atlantic) … New York Gov. Andrew Cuomo (D) says former Vice President Joe Biden (D) “has the best case” to be the party’s nominee (CNN).

ADMINISTRATION: U.S. Ambassador to Russia Jon Huntsman on Wednesday visited an American citizen in Russian custody, five days after the corporate security director was mysteriously arrested (CNN). The Trump administration is seeking an explanation from Russia about why it detained a retired U.S. Marine on spying charges in Moscow, Secretary of State Mike Pompeo said on Wednesday.

The United States will demand Paul Whelan’s immediate return if his detention is deemed inappropriate, Pompeo said while traveling in Brazil following the inauguration of Jair Bolsonaro as president. Pompeo said State Department consular representatives in Russia are seeking to speak with Whelan (Reuters).

Economy and markets: The president on Wednesday referred to December’s steep stock market swoon as a “glitch,” and predicted financial markets will rise again (Reuters).

Federal Reserve: Trump has repeatedly criticized Jerome Powell, chairman of the nation’s central bank, for the Fed’s decision to raise interest rates in 2018 and likely continue that policy this year. Any attempt by the president to fire Powell or demote him from the chairmanship could ignite a chain of calamities that would roil the global economy and financial markets, according to experts (The Hill).

The Supreme Court is too gun-shy on the Second Amendment, by Ilya Shapiro and Matthew Larosiere, opinion contributors, The Wall Street Journal. https://on.wsj.com/2F5txo1

Hill.TV’s “Rising” program, starting at 8 a.m., features a look at House Democrats with Steven Horsford, who returns to Washington to represent his Nevada district today after losing the same seat a few years ago. And U.S. Customs and Border Patrol chief agent Brian Hastings talks about immigration with host Buck Sexton. http://thehill.com/hilltv

The Senate convenes for a pro forma session at 11:50 a.m.

The president has no public schedule as the day begins.

Vice President Pence will participate in the swearing-in ceremony for newly and re-elected members of the Senate.

> Space: NASA unveiled a snowman-shaped picture on Wednesday — results from the flyby exploration of the most distant object ever visited, known as Ultima Thule, an icy world 4.1 billion miles from the sun (The New York Times). … And China on Thursday landed the world’s first spacecraft on the dark side of the moon. The lunar explorer, called Chang’e 4, is named after a Chinese goddess (The Associated Press). 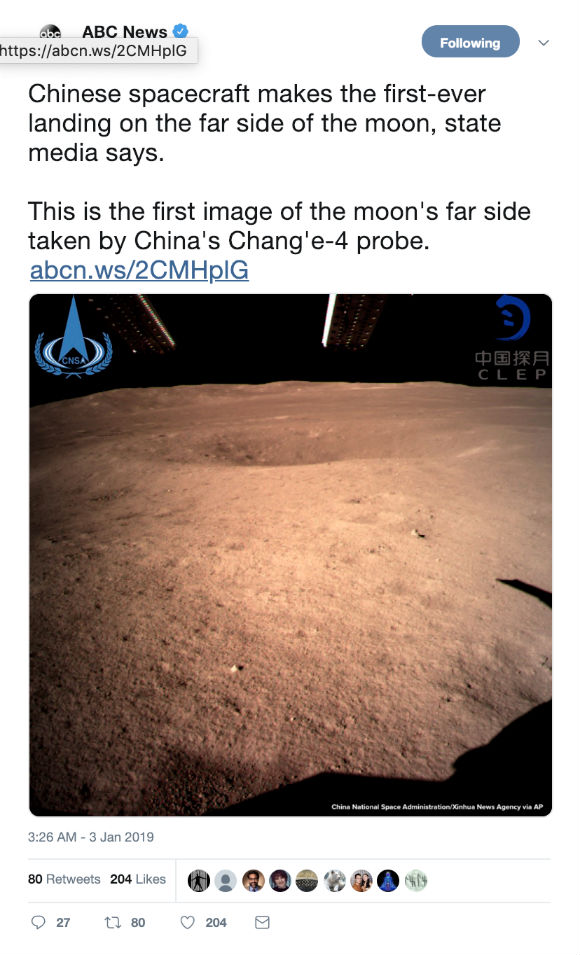 > Tech & economy: Apple warned that its sales will fall short and pointed to “deterioration” in China, adding Wednesday to fears of a global economic slowdown (The Washington Post). European and Asian markets fell this morning on that news (The Associated Press).

> Turkey: Turks are leaving their country in droves and taking talent and capital with them in a sign of the nation’s loss of confidence in the leadership of President Recep Tayyip Erdoğan (The New York Times).

> Catholic Church: For decades, nuns in India have faced rape and sexual assaults by priests (The Associated Press)

And finally … It’s Thursday, which means it’s time for this week’s Morning Report Quiz! Inspired by House Democrats’ majority status in 2019, we’re eager for some smart guesses about Pelosi.

Email your responses to jeasley@thehill.com or asimendinger@thehill.com, and please add “Quiz” to subject lines. Winners who submit correct answers will enjoy some richly deserved newsletter fame on Friday.

Which of these statements is FALSE about Pelosi?

Pelosi recently appeared on “The Late Show with Stephen Colbert” to participate in a test of her well-known love of what? 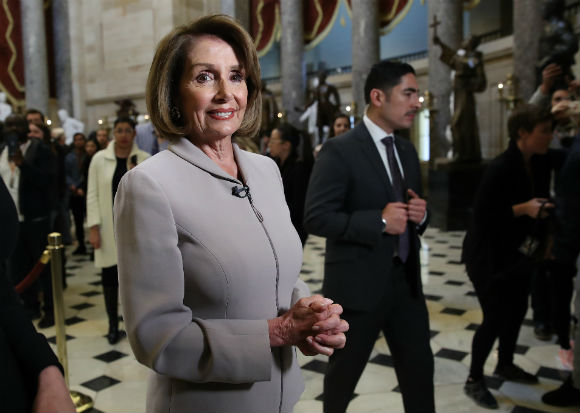