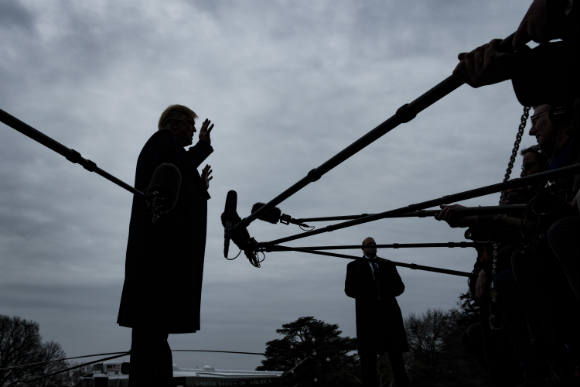 Welcome to The Hill’s Morning Report, and happy Tuesday! Our newsletter gets you up to speed on the most important developments in politics and policy, plus trends to watch. Co-creators are Jonathan Easley and Alexis Simendinger (CLICK HERE to subscribe!). On Twitter, you can find us at @joneasley and @asimendinger.

Lawmakers return to Washington this week to consider President Trump’s proposal to reopen the federal government.

Over the weekend, the president reignited stalled negotiations with Democrats, saying he’d sign a government funding bill that grants a temporary extension for beneficiaries of the Deferred Action for Childhood Arrivals program. And he offered a reprieve on protected status for some immigrants from Latin American and African countries, if Congress also goes along with $5.7 billion in new funding for the wall. The Trump administration is simultaneously challenging those immigrant-protection programs in court.

Senate Majority Leader Mitch McConnell (R-Ky.) says there will be a vote in the Senate this week, where the GOP proposal will need support from at least seven Democrats to reach the 60-vote threshold for passage in the upper chamber.

The president, who has not said if or how he’ll deliver a State of the Union message next week, hopes the shutdown bill passes the Senate by an overwhelming margin, thereby pressuring Speaker Nancy Pelosi (D-Calif.) to consider the offer.

While a few Democrats could join Republicans in supporting the bill, it’s unlikely the measure will get the necessary 60 votes.

And it’s noteworthy that not even one Democrat has said he or she will vote for Trump’s plan. The White House was hoping to crack the Democrats’ unity and that hasn’t happened. Still, Senate Republicans are now able to play offense after playing defense for weeks.

Regardless, the deal appears to be dead-on-arrival in the House, where Pelosi this week plans to move ahead with another round of votes on smaller funding bills that have no additional money for a border wall. McConnell has repeatedly blocked those bills from getting a vote in the Senate.

The Hill: Congress heading in opposite directions on shutdown.

Tuesday marks the 32nd day of the longest government shutdown in history. It’s also the two-year anniversary of Trump being sworn in as the nation’s 45th president. On Friday, government workers impacted by the government shutdown – some of whom are working through the impasse – will miss their second consecutive paycheck if no action is taken. 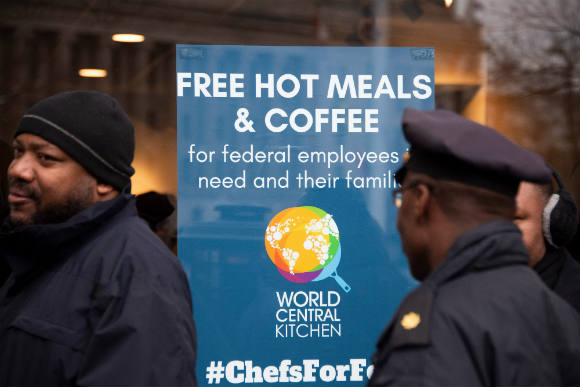 POLITICS: The 2020 Democratic presidential hopefuls took advantage of the federal holiday on Monday to position themselves in the growing field of candidates and to draw contrasts with Trump.

Harris: Why I’m running for president.

The San Francisco Chronicle: How can Harris stand out in 2020 race? 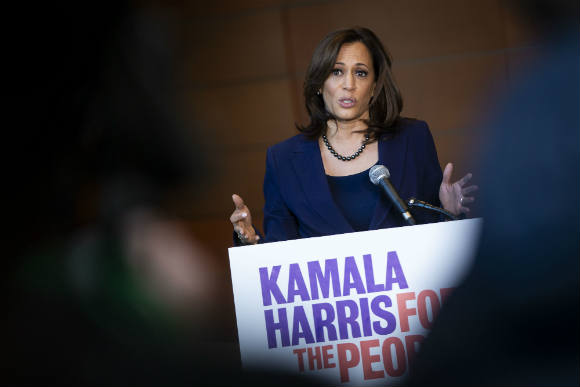 Harris and Sen. Elizabeth Warren (D-Mass.) are presently the most formidable candidates in a field that is still waiting on big names such as former Vice President Joe Biden and Sen. Bernie Sanders (I-Vt.).

A look at a busy week ahead on the campaign trail…

Warren: The Massachusetts senator will hold an event in Puerto Rico today before a campaign stop in the early voting state of South Carolina on Wednesday.

Sen. Kirsten Gillibrand (D-N.Y.): Gillibrand spent the weekend courting caucus voters in Iowa (The Wall Street Journal). She has been on the defensive, having to explain her past hawkish views on immigration (The Hill).

The Washington Post: What we learned about Gillibrand this weekend.

Biden: The former vice president also spent the weekend backpedaling. Biden expressed regret for his past support for a crime bill that imposed stronger sentences for possession of crack cocaine, a policy that disproportionately harmed African-American men (The Associated Press).

INTERNATIONAL: While preoccupied with Congress and the shutdown, the Trump administration remains challenged around the world.

Syria: For the second time in a week, an Islamic State suicide bomber on Monday attacked U.S. troops in Syria, highlighting the risks tied to the planned withdrawal of U.S. forces from the war-torn country. There were no U.S. casualties in the attack on a joint convoy of U.S. and allied Kurdish forces in Northern Syria, according to officials (The Associated Press).

Russia: The Trump administration called on Russia on Monday to destroy a new cruise missile system which it said was a “direct and continuing violation” of the Intermediate-range Nuclear Forces (INF) Treaty. The United States accused Moscow of destabilizing global security (Reuters). … American Paul Whelan, a former U.S. marine held by Russia since Dec. 29 on spying charges, can remain in custody and not be granted bail, a Moscow court ruled today (Reuters).

United Kingdom: Prime Minister Theresa May on Monday again rejected calls to rule out a “no-deal” exit from the European Union at the end of March and warned another EU referendum on Brexit could threaten Great Britain’s “social cohesion.” The prime minister had to make the statement after members of parliament rejected her Brexit plan last week. Parliament is due to vote again this month on a modified version of the deal, although May offered few details about how the plan that’s been rejected would change (BBC). 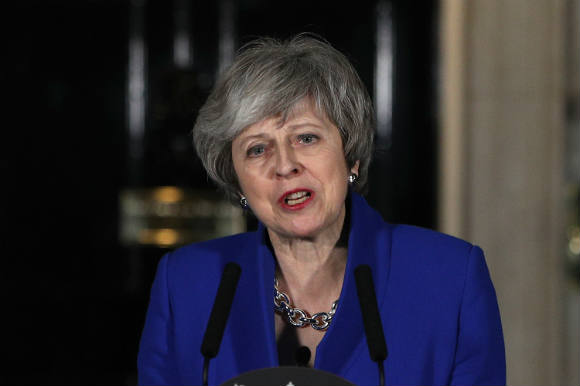 China: As a condition of ongoing trade talks, the United States is seeking to gain periodic compliance checks that could result in tariffs punishments if China is deemed to have violated the terms of any bilateral agreement. China is resisting the idea (Reuters). … In the midst of the talks, China granted Ivanka Trump five trademarks (The Associated Press). … And as a backdrop, China is poised to post the slowest growth in 28 years in 2018 (Reuters).

North Korea: A planned second summit between Trump and Kim Jong Un in late February is seen by South Korea as a potential turning point, while others in the region view it as a last chance for denuclearization on the Korean Peninsula (The Washington Post). … Meanwhile, a report released Monday by the Center for Strategic and International Studies disclosed that hidden from view, one of 20 undeclared ballistic missile operating bases in North Korea serves as a missile headquarters (Reuters).

Does journalism have a future? by Jill Lepore, The New Yorker. http://bit.ly/2DrTc9z

The House meets at noon while legislative business is expected after 2 p.m. The House Rules Committee will meet at 5 p.m. to discuss the “Consolidated Appropriations Act of 2019.”

The Senate convenes at 1 p.m. and was expected to resume consideration of the Strengthening America’s Security in the Middle East Act. Senate GOP leaders may introduce a bill supported by Trump to provide $5.7 billion for a border wall in exchange for immigration policy changes previously supported by Democrats, including for DACA.

The president receives his intelligence briefing at noon and has lunch with Vice President Pence. The president and first lady Melania Trump mark their 14th wedding anniversary today. 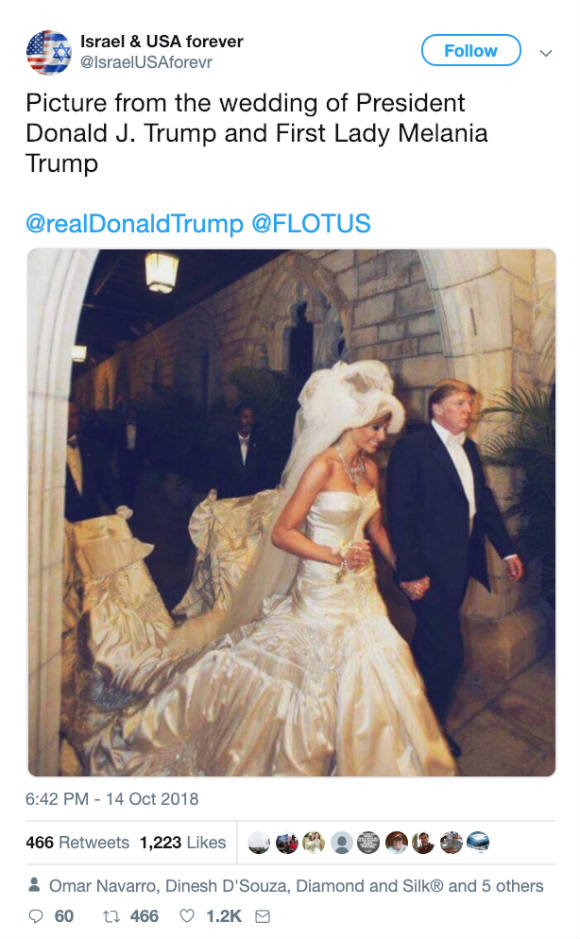 > States: Nearly 47 years after Congress passed the Equal Rights Amendment to establish gender equality under the law, state support has almost caught up. Virginia could become the 38th state needed for ratification (The Hill/Wheeler).

> Genetics: The Chinese scientist who claimed he created the world’s first genetically edited babies will likely face criminal charges in China along with his collaborators, according to results of a government investigation reported on Monday (The New York Times).

> Social media: A viral video clip showing an encounter between a smiling high school junior and Native American activist Nathan Phillips on the steps of the Lincoln Memorial got a lot of people riled up over the weekend. Additional reporting, video and much-needed context followed (NPR). Twitter suspended one fake account involved in circulating the initial narrative out of a base in Brazil (CNN). 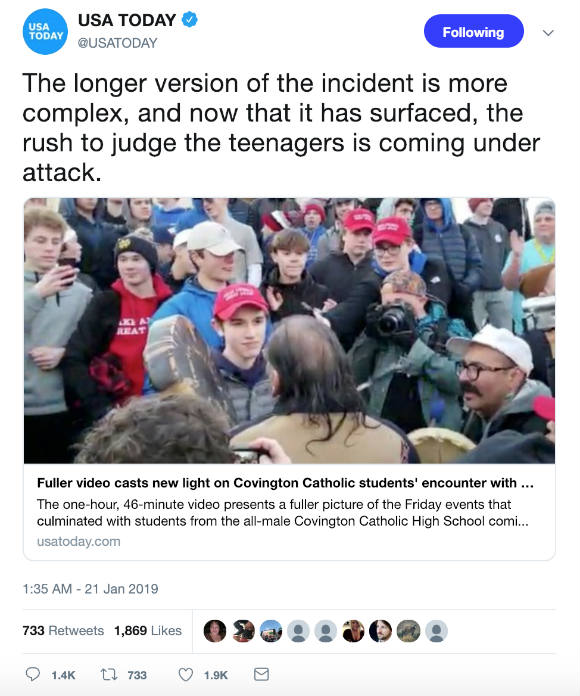 Late Monday, Trump tweeted that the student, Nick Sandmann, had been “smeared” by the media. 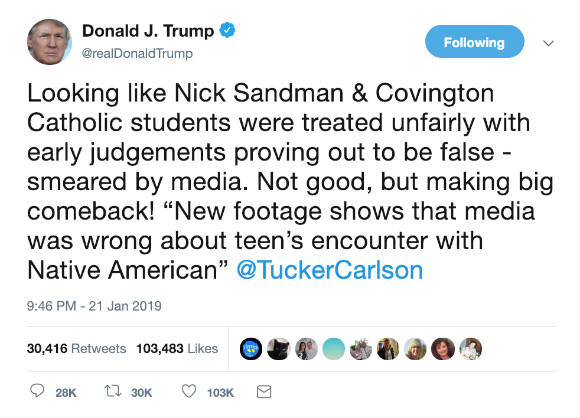 And finally … The stage is set for Super Bowl LIII after a thrilling championship weekend, but not without a heavy dose of controversy that will dog the NFL through the offseason.

The New England Patriots and Los Angeles Rams will square off at Mercedes-Benz Stadium in Atlanta on Feb. 3. The Patriots, making their third straight trip, are 2.5 point favorites.

Fans of the New Orleans Saints, however, feel they were robbed of a trip to the big game. 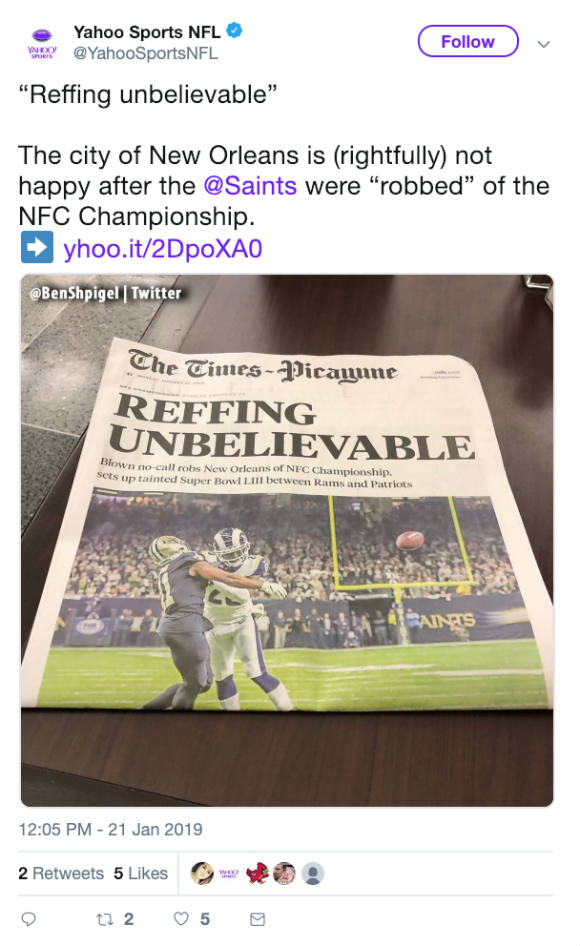 The referees swallowed their whistles on a clear pass-interference call late in the game. It would have set the Saints up to score a potential game-winning touchdown in regulation. Instead, the Saints lost a heartbreaker to the Rams in overtime.

The NFL acknowledged referees made a mistake and at least one sportsbook in Atlantic City is refunding bets made on the Saints (USA Today). Eye doctors in Louisiana are offering free vision exams for refs (Fox2).

There are calls for the NFL Rules Committee to allow for instant replay on critical pass-interference calls. Saints coach Sean Payton is on the committee and signaled that he’d push for a replay review (SaintsWire).

“We’ll probably never get over it.” – Payton

Ouch. The Saints 2018 playoff campaign ended in similarly wrenching fashion, on the last play of the game against the Minnesota Vikings. 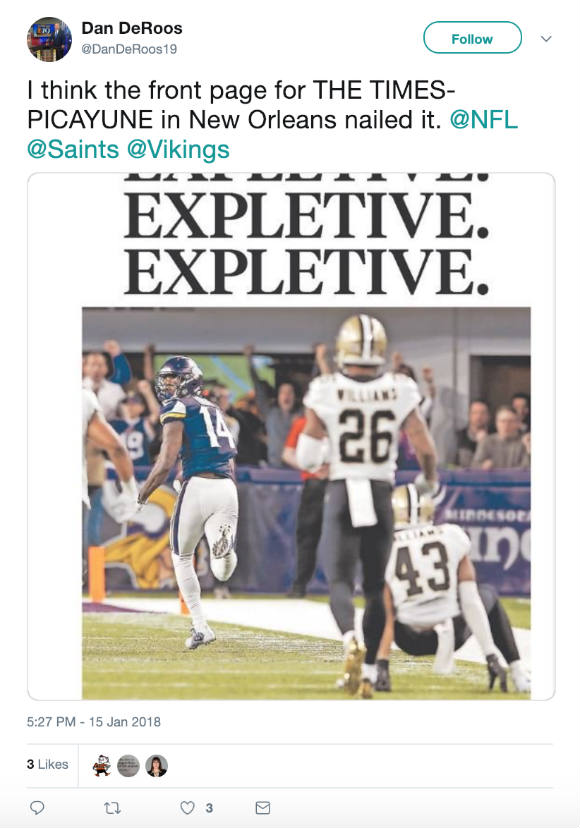 ESPN: Missed calls and masterpieces – 16 plays that gave us this Super Bowl.

More on the Super Bowl … Prop bets are popular for Super Bowl, but NFL wants them gone (The Associated Press) … How sticky gloves have changed football (The New York Times). 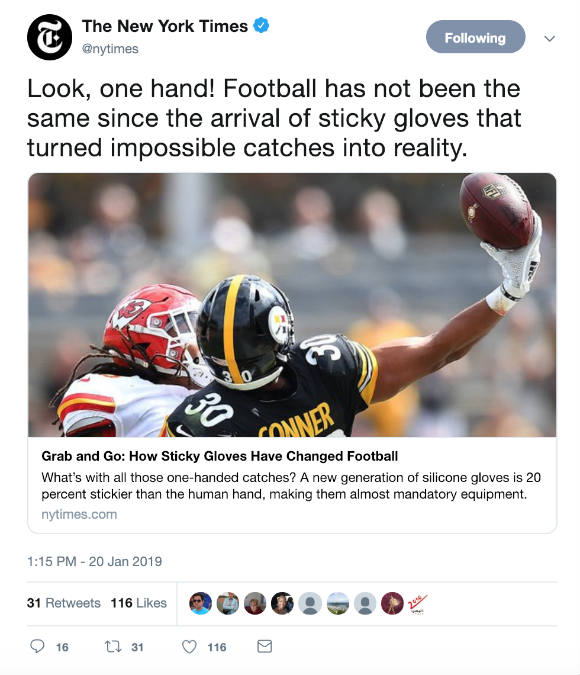