Welcome to The Hill’s Morning Report. Happy Friday! Our newsletter gets you up to speed on the most important developments in politics and policy, plus trends to watch. Co-creators are Jonathan Easley and Alexis Simendinger (CLICK HERE to subscribe!). On Twitter, you can find us at @joneasley and @asimendinger.

House Democrats will introduce a joint resolution today to block President Trump’s emergency declaration, kicking off round two of the border wall fight that has consumed Washington for months.

The resolution will be introduced by Rep. Joaquin Castro, a Democrat from Texas. At only one page long, the resolution gets straight to the point:

“The national emergency declared by the finding of the President on February 15, 2019 … is hereby terminated.”

It will take several weeks to move the resolution through committee and several days after that to get it to the House floor for a vote. There is no rush for Democrats, who are united on this front and happy to allow additional time for GOP divisions to spill into the open.

On Thursday, GOP Rep. Mike Gallagher (Wis.), who hails from a Trump friendly district, said he doesn’t believe that the emergency declaration is the right course of action.

“The problem is the president came to Congress asking for something. Congress said no. Our system doesn’t then allow the president to say, ‘Ok ‘I’m just going do it anyway through some sort of cheat code’.” – Gallagher

Once the resolution passes the Democratic-controlled House, the GOP-controlled Senate will be required to vote on it. Senate Democrats could introduce an identical resolution as early as today.

Democrats need to pick up at least four Republicans in the Senate for it to pass. Sen. Susan Collins (R-Maine) this week became the first GOP senator to say she would vote in favor of the resolution. Several others have publicly criticized Trump’s emergency declaration.

If the resolution passes the Senate, it could lead to Trump’s first veto.

If Congress can’t override the veto, there are about a half-dozen lawsuits working their way through the courts at the moment. If Congress votes overwhelmingly to rebuke Trump, it could damage the administration’s arguments in court.

Poll: Most Americans believe Trump’s emergency declaration will be struck down.

If that’s not enough drama for you, the federal debt surpassed $22 trillion this month.

The U.S. will hit the debt ceiling on March 1. Republicans and Democrats are contemplating how to use the borrowing limit to extract concessions from one another, so another brutal fiscal fight is on the horizon.

WHITE HOUSE & ADMINISTRATION: Trump-Kim summit: The United States hopes to make rapid progress with North Korean leader Kim Jong Un at the upcoming summit with Trump next week in Vietnam. The U.S. aim is to nail down agreement with Pyongyang to forfeit its nuclear arsenal, rather than more prolonged discussions about incremental steps. The Trump administration wants a full accounting of North Korea’s nuclear forces and facilities, which the United States was unable to get in the past year and a half, but a marker of progress seen by analysts as necessary in order to verify any steps the country takes to disarm (Bloomberg). … Meanwhile, North Korea has warned it faces food shortages (Reuters).

Venezuela: The Trump administration next week will send Vice President Pence to Colombia, across the border from Venezuela, to reinforce the international call for Nicolás Maduro to step down from the presidency in Caracas. The vice president’s trip on Monday will be his fifth to Latin America to represent the administration (McClatchy). On Thursday, Maduro, whose authoritarian grip on power helped spark a mass exodus from a nation in economic crisis, shut Venezuela’s vast border with Brazil to prevent international food and other humanitarian aid from entering. He says he may do the same with Venezuela’s border with Colombia (NBC News).

China trade: Trump and Chinese Vice Premier Liu He meet today at the White House for an Oval Office meeting analysts believe is a sign of momentum for ongoing trade talks between the two countries. U.S. and Chinese negotiators in Washington are discussing Beijing’s proposal to purchase $30 billion more in U.S. agricultural imports, including soybeans, corn and wheat, as part of a broader deal to avert escalating tariffs threatened by Trump (Bloomberg).

Labor secretary: A U.S. district court judge ruled Thursday that former federal prosecutors — among them Alexander Acosta, who at the time was the U.S. attorney in Miami and is now secretary of Labor — broke federal law by approving a plea agreement with a wealthy, politically connected sex trafficker, Jeffrey Epstein, and concealed the agreement from more than 30 of his underage victims (The Miami Herald). The decision follows the newspaper’s series, “Perversion of Justice,’’ which in November detailed how federal prosecutors worked in concert with Epstein’s lawyers to arrange the deal. Epstein was released from prison in 2009. … Reacting to the judge’s ruling, Nebraska Republican Sen. Ben Sasse, a key overseer on the Senate Judiciary Committee, called on the Justice Department “to reopen its non-prosecution agreement so that Epstein and anyone else who abused these children are held accountable.”

Immigration: In 2017, the Trump administration vowed to end a federal program that provided work permits to spouses of certain immigrants. That change now appears imminent. The policy of granting permits to the spouses of some H-1B skilled guest workers is to be eliminated under a proposed rule sent to the Office of Management and Budget for review Wednesday by the U.S. Citizenship and Immigration Services (Bloomberg).

INVESTIGATIONS: Special counsel Robert Mueller could turn over his report to Attorney General William Barr any day now, bringing an end to the two-year investigation into Russia’s election interference.

Barr has said he expects to summarize the report he gets from Mueller and submit the summary to Congress.

That’s not going to cut it for many lawmakers. Sen. Richard Blumenthal (D-Conn.) is already threatening to subpoena the full Mueller report if Barr does not hand it over to Congress.

The Associated Press: Mueller report may be short on details. 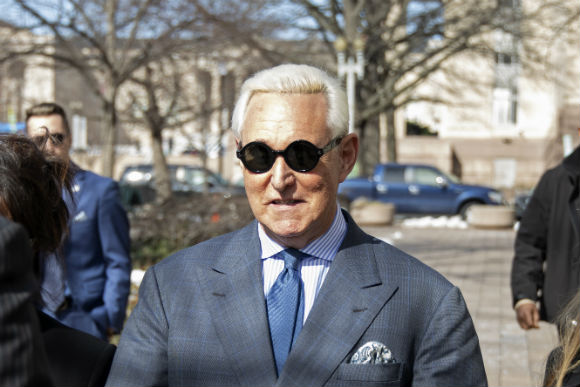 CAMPAIGNS & POLITICS: Sens. Kamala Harris (D-Calif.) and Elizabeth Warren (D-Mass.) have come out in support of reparations for African-Americans. Former President Obama and former Secretary of State Hillary Clinton did not support reparations as presidential candidates, underscoring how in 2020 the Democratic presidential field is gravitating toward more race-conscious policies (The New York Times).

Democrats are also embracing a tax-the-rich ethos after years of ducking it, Bloomberg reports.

Max Greenwood writes that Warren and Sen. Bernie Sanders (I-Vt.) will face an early test in the crucial early primary state of New Hampshire. Both senators hail from New England and will be viewed as having the home-field advantage. Adding to the pressure on Sanders — he defeated Clinton there in 2016 (The Hill).

Meanwhile, Amie Parnes reports that Sanders’s Democratic critics are already warning that he’ll be a weak general election candidate because of his affinity for policies grounded in socialism (The Hill).

Time: Biggest field yet. A divided base. Welcome to the Dem primary.

More from campaigns and politics … In a startling decision, North Carolina board calls for new election in contested House race (The Hill) … Calling it a “kamikaze mission,” Maryland Gov. Larry Hogan (R) says he won’t launch a primary challenge against Trump unless something dramatic happens (The Associated Press) … Hogan also blasted the Republican National Committee for shielding Trump from a primary challenger (The Washington Post) … Secretary of State Mike Pompeo has ruled out a run for Senate in Kansas (The Hill).

What the Jussie Smollett story reveals, by John McWhorter, The Atlantic. http://bit.ly/2Elmo27

The House and Senate are not scheduled to vote during recess this week.

The president meets with Chinese Vice Premier Liu He in the Oval Office at 2:30 p.m. Trump speaks to the Republican Governors Association this evening in Washington

The National Governors Association’s annual winter meeting begins this weekend in Washington, Feb. 22-25. Today, the vice president and Karen Pence plan to host a luncheon for invited governors at their residence.

The Hill will hold a Leadership in Action: Criminal Justice Reform panel on Tuesday featuring Sen. Ben Cardin (D-Md.) and Reps. Cedric Richmond (D-La.) and Doug Collins (R-Ga.). Editor-in-Chief Bob Cusack and Hill.TV’s Jamal Simmons will moderate the panel on the future of criminal justice reform and what comes next after the passage of the First Step Act. RSVP here.

The Attorney Poker Tour is having its first charity poker tournament at MGM National Harbor on Saturday at 10 a.m. in the poker room. The event benefits the charity Protect Our Defenders, which advocates against sexual violence in the military. Although this is an event for the Washington legal community, anyone can play, and all are invited. Details are on the site: www.attorneypokertour.com

➔ Jussie Smollett: The Chicago Police Department held a press conference on Thursday detailing how the “Empire” actor allegedly staged a hate crime against himself. Smollett, who is accused of paying two men to pretend to attack him and mailed a racist letter with white powder to himself because he was unhappy with his compensation, is charged with one felony count of filing a false police report. The actor had claimed Trump supporters attacked him and tied a noose around his neck (The Associated Press).

Trump on Thursday said Smollett insulted “tens of millions of people” with his “dangerous” claims. Democratic Rep. Bobby Rush, an African-American representing a district in Chicago, called Smollett’s behavior “brazen, devious and disgraceful.” Several Democrats who initially stood by Smollett are deleting or revisiting their initial tweets about the attack. 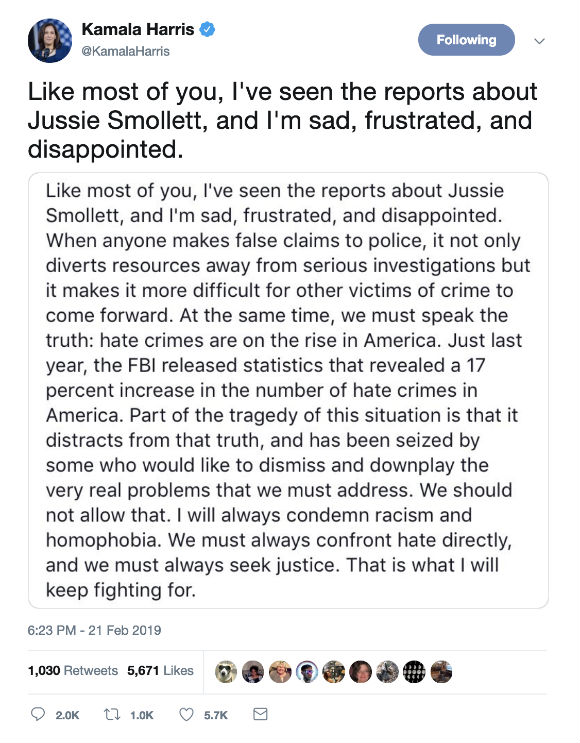 The New York Times: How top Democrats initially reacted to the Smollett case.

The Hill’s In The Know: Smollett controversy roils political world.

➔ Catholic Church: Pope Francis proposed a 21-point plan for punishing sexual predators and protecting children at a landmark summit of church leaders to address sexual abuse among the clergy (The Associated Press). Victims of abuse also testified at the conference (Reuters).

➔ Sports: A panel is considering adding breakdancing, surfing, climbing and skateboarding to the roster of Olympic sports in 2024 (CNN).

They knew that Katharine Hepburn won more “Best Actress” awards than anyone, edging out Meryl Streep, who has the most nominations.

“Titanic,” “Lord of the Rings: The Return of the King” and “Ben Hur” tied for capturing the most Oscars in an awards year, at 11. “Forrest Gump” won six, including for “Best Picture.”

Tatum O’Neal is the youngest person to win an Oscar, honored as “Best Supporting Actress” for her performance in “Paper Moon” at age 10. Editor’s Note: Some eagle-eyed readers noted that Shirley Temple was given an honorary Academy Award when she was 6, so we accepted that answer, too.

Kathryn Bigelow became the first woman to win “Best Director” in 2010 for “The Hurt Locker.”

The last actor to win back-to-back Oscars was Tom Hanks in 1993 and 1994 for his roles in “Philadelphia” and “Forrest Gump.” 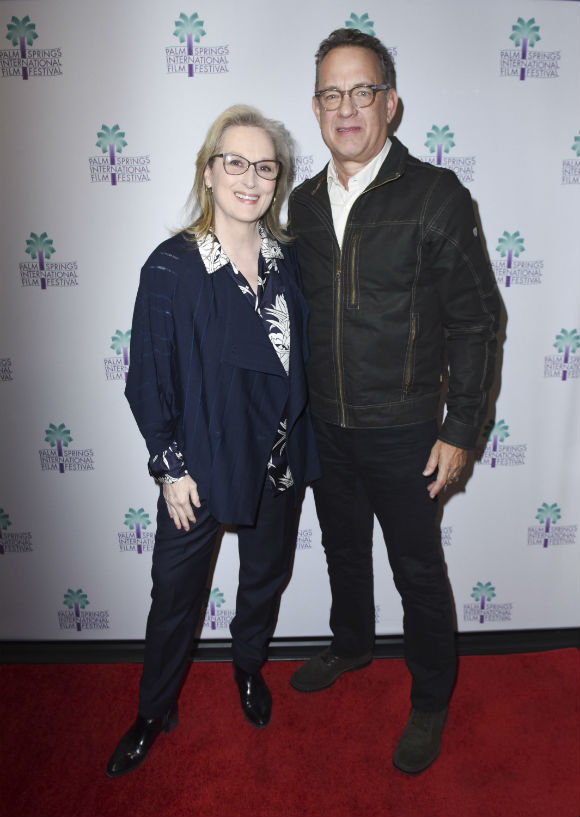