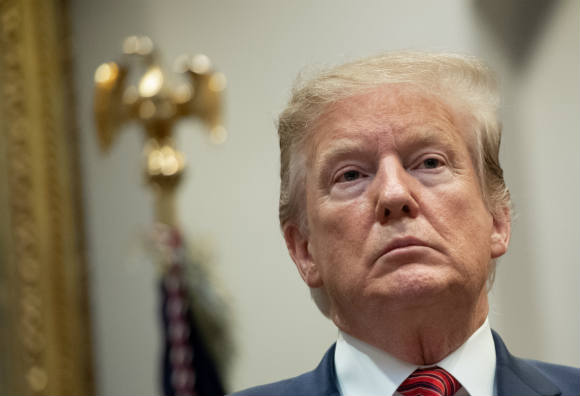 Welcome to The Hill’s Morning Report. Happy Wednesday! Our newsletter gets you up to speed on the most important developments in politics and policy, plus trends to watch. Co-creators are Jonathan Easley and Alexis Simendinger (CLICK HERE to subscribe!). On Twitter, you can find us at @joneasley and @asimendinger.

The battle between President Trump and House Democrats is heating up as Washington turns the corner into a presidential campaign cycle that will be dominated by the struggle between the legislative and executive branches.

Trump unloaded on Tuesday after several powerful Democratic chairmen in the House announced sprawling new investigations into his administration, his associates and his business empire.

Trump threatened to stonewall investigators and said he’s ready to settle the matter on the campaign trail.

“Basically they’ve started the campaign, so their campaign begins, but … their campaign’s been going on for the last two and a half years… They could not stand losing in 2016… And they just haven’t gotten used to the fact that we won a lot of states that haven’t been won by Republicans in a long time. But essentially … the campaign begins.” — Trump

In the near term, Washington will be consumed by the Democratic investigations:

> Trump’s former attorney Michael Cohen, whose testimony last week served as the impetus for many of the new inquiries, returns to Capitol Hill today for another session with the House Intelligence Committee.

The Hill: Cohen returns for new hearing with House lawmakers.

> The battle between Trump and House Judiciary Committee Chairman Jerrold Nadler (D-N.Y.), whom the president once referred to as “Fat Jerry,” has scarcely begun. Nadler has requested documents from 81 people and entities in Trump’s orbit as part of his sprawling new probe.

The Associated Press: Trump to battle investigations with condemnation and lawyers.

The Hill: Breadth of Trump probe poses challenge for Dems.

While the myriad investigations have damaged Trump politically, some seasoned operatives are worried that Democrats are overplaying their hand. 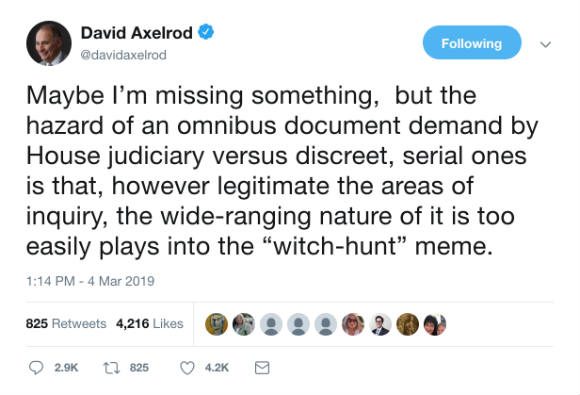 Others, such as Greg Hale, a former top adviser to Hillary Clinton, are warning that an effort to impeach the president could backfire and help Trump get reelected. 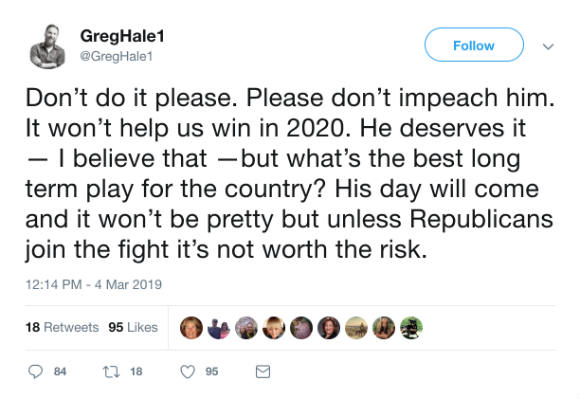 Quinnipiac University National Poll: Yin and yang … nearly two-thirds say Trump committed crimes before he was president and a majority say the president should not be impeached.

CONGRESS: Vice President Pence warned GOP senators on Tuesday that voting against Trump’s emergency declaration to build more miles of border wall will be politically injurious to the renegades.

“Any vote against the president’s national emergency declaration is a vote against border security,” Pence said while visiting border state Arizona.

As the vice president was speaking, the administration released new statistics about immigrants’ border crossings in the last five months. The numbers show  a significant surge, and Trump is using the data to defend his plan to expand miles of wall at the southwest border.

GOP senators, over lunch in the Capitol on Tuesday, appeared unmoved by administration arguments to back the president or risk appearing soft on national security. A growing number of GOP senators believe a precedent Trump set with his declaration presents long-term hazards for the legislative branch and for future presidents.

Alexander Bolton reports on hand-wringing discussions among senators about their options, and one Republican senator told The Hill as many as 15 GOP colleagues appear ready to buck Trump in any vote on a resolution of disapproval (The Hill). Without a GOP alternative to a floor vote on a House-passed resolution, a wave breaking away from the president is predicted (The Hill).

The Washington Post: Facing a choice between bucking the president and defending the Senate authority.

Another potential rift between the White House and Senate Republicans may widen if lawmakers decide to try to tighten sanctions on Saudi Arabia in response to the death of journalist Jamal Khashoggi in October.

A closed-door Senate hearing on Monday about intelligence findings about his alleged slaying inside the Saudi Consulate in Istanbul did little to alleviate senators’ frustrations that Trump has been too conciliatory to Saudi Crown Prince Mohammed bin Salman and the country’s ruling royal family (The Hill).

Meanwhile, a grisly mystery about the location of Khashoggi’s body has not been solved. One new report suggests his corpse may have been incinerated in “a large oven” at the consulate general’s residence in Istanbul (Al Jazeera).

> In the House, Democrats are prepared to support a resolution this week that condemns anti-Semitism and religious bigotry. Democratic leaders and members of the caucus met late on Tuesday to hash out the wording and timing (The Washington Post).

A resolution is intended to serve as a public rebuke to freshman Rep. Ilhan Omar (D-Minn.) over her remarks perceived as critical of Israel and pro-Israel advocacy groups. Some Democrats are arguing the House is overreacting (The Hill).

One colleague who has taken up residence in Omar’s corner is New York democratic socialist Rep. Alexandria Ocasio-Cortez (The Hill).

POLITICS: Early presidential polling can be misleading, as candidates with the highest name recognition generally have the most support. But early returns look promising for Vermont Sen. Bernie Sanders (I) and former Vice President Joe Biden, if he decides to get into the race. 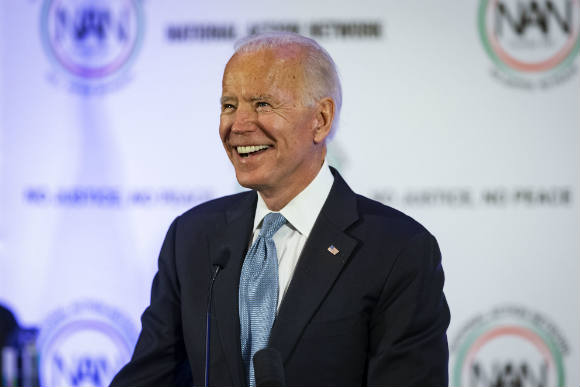 That’s good news for Biden after a Democratic focus group conducted by CNN rejected the former vice president as the party’s presidential nominee, casting him as a “pragmatic centrist” whose “time is done.” Democrats on the panel advocated for someone from the liberal wing of the party.

That would include Sanders, who has steadfastly refused to officially join the Democratic Party. On Tuesday, Sanders signed a pledge saying he would run for president as a Democrat, and would not run as an Independent if he doesn’t win the party’s nomination (The Hill).

Meanwhile, Michael Bloomberg announced Tuesday he will not run for the Democratic presidential nomination. In an op-ed published at Bloomberg News, the former New York City mayor acknowledged his narrow path to the nomination and said he could accomplish more as a private citizen.

“I know there’s much more we can accomplish over the next two years, but only if we stay focused on the work and expand upon it. And the fact is: A national presidential campaign would limit my ability to do that.” — Bloomberg

Former Secretary of State Hillary Clinton appears to have ruled out a presidential bid in 2020. Amie Parnes takes a deep dive into what her role might be within the party going forward, assuming she doesn’t make a dramatic reversal (The Hill). 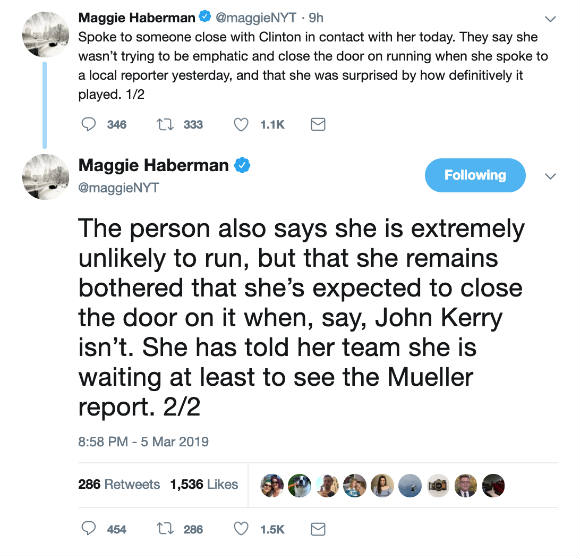 Looking down ballot, Scott Wong and Mike Lillis sat down with Rep. Cheri Bustos (D-Ill.), the new chairwoman of the Democratic Congressional Campaign Committee, to talk about her strategy to protect the new majority in the House in 2020. Bustos took a swipe at the progressive Medicare for All plan, calling the price tag “a little scary.”

More from campaigns and politics …. The U.S. Chamber of Commerce is undergoing a staff overhaul that has some worried about turmoil at the pro-business, historically conservative lobbying group (The Hill) … There’s been a sea change on marijuana legalization, with the Democratic presidential candidates united in their support (The Hill).

The Senate meets at 10 a.m. Senate and House Democrats plan a press event at 11:15 a.m. to unveil net neutrality legislation. The Senate Judiciary Committee will hear from Customs and Border Protection Commissioner Kevin McAleenan at 10 a.m. about his agency’s response to the smuggling of people at the southern border.

The president greets Danny Burch, a former American hostage in Yemen, and his family in the Oval Office at 2 p.m. He meets with Rep. Adam Kinzinger (R-Ill.) (who was encouraged by Pence in 2009 to run for Congress). Trump attends a meeting of the American Workforce Policy Advisory Board, which he created by executive order in July as part of a Commerce Department focus on U.S. workers.

Pence will speak at the Latino Coalition Legislative Summit co-hosted by the Job Creators Network at 12:15 p.m. at the Park Hyatt in Washington. He’ll talk about the U.S. economy and reaffirm the administration’s backing for Juan Guaidó, the interim president of Venezuela.

Treasury Secretary Steven Mnuchin at 2:30 p.m. addresses an opening session of the Financial Stability Oversight Council, held at the department.

Former White House chief of staff John Kelly will speak at Duke University at 5:30 p.m. about leading America in a time of global turbulence. (The Q&A promises to be interesting — Trump’s instructions re: media mergers and security clearances, anyone?).

The American Bar Association and the National Institute on White Collar Crime host a conference in New Orleans today through March 8. Participants include senior Justice Department officials, plus representatives of the Securities and Exchange Commission, the Federal Trade Commission, the Commodity Futures Trading Commission, the federal judiciary, state attorneys general, academics and other experts.

The Bureau of Economic Analysis reports at 8:30 a.m. on the U.S. trade deficit during December.

The Federal Reserve releases its Beige Book of key data from district banks at 2 p.m.

Food and Drug Administration Commissioner Dr. Scott Gottlieb made headlines Tuesday with news that he plans to resign and depart the administration in about a month. At the FDA, he pushed to tighten regulation of e-cigarettes and tobacco firms — a stance that attracted praise and criticism (The Washington Post).

➔ Economy: U.S. consumers have racked up $870 billion in credit card debt, an increase of $26 billion from last quarter and the highest level on record (Bloomberg).

➔ North Korea: Kim Jong Un and his government are restoring part of a missile launch site that was to be dismantled as part of a 2018 agreement with Trump and the United States (Reuters).

And finally … In New Orleans yesterday, revelers marked the end of Mardi Gras season with the ceremonial Bourbon Street exuberance that ushers out the Carnival period, which began Jan. 6. The festivities marked today’s symbolic transition to fasting and reflection associated with Lent, observed by many Christians (The Associated Press).

The Big Easy, as always, served up a feast for the eyes and imagination. 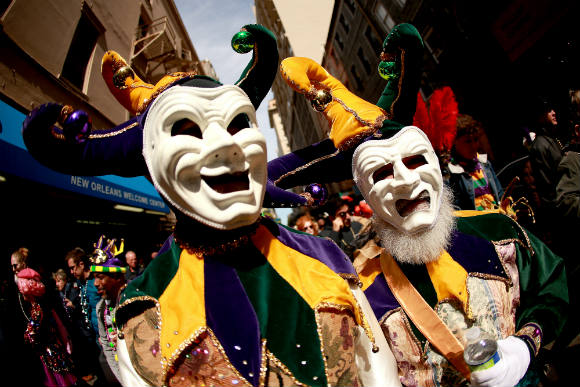