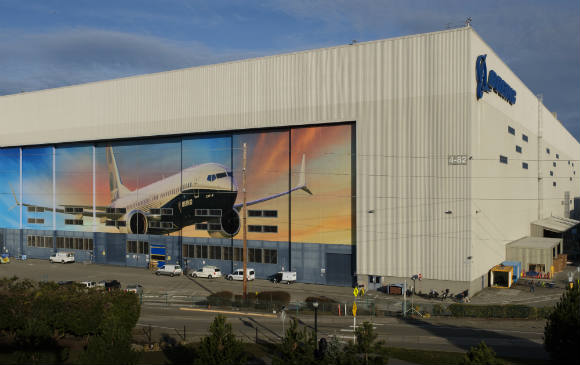 Welcome to The Hill’s Morning Report. Happy Wednesday! Our newsletter gets you up to speed on the most important developments in politics and policy, plus trends to watch. Co-creators are Jonathan Easley and Alexis Simendinger (CLICK HERE to subscribe!). On Twitter, you can find us at @joneasley and @asimendinger.

The global panic over the safety of Boeing’s premier commercial airliner has reached the White House.

In a phone call on Tuesday, Boeing CEO Dennis Muilenburg sought to assure President Trump of the safety of the Boeing 737 Max 8, as pressure mounts on the administration and the company to ground the plane until an international investigation is complete.

Lawmakers, industry groups and foreign officials are demanding answers after a Boeing 737 Max 8 crashed in Ethiopia over the weekend, killing all 157 people on board. In October, the same model jet crashed in Indonesia, killing 189 people.

Boeing said it would update its flight control systems to comply with an advisory from the Federal Aviation Administration (FAA) mandating specific “design changes” by next month (Chicago Tribune).

But the FAA is taking no further action at this point.

“Thus far, our review shows no systemic performance issues and provides no basis to order grounding the aircraft. …If any issues affecting the continued airworthiness of the aircraft are identified, the FAA will take immediate and appropriate action.” — FAA airworthiness notification authorizing continued flights of the Boeing 737 Max 8 fleet

The president, who has boasted about a decline in domestic aviation disasters under his watch, tweeted on Tuesday that airplanes have become “too complex to fly.”

White House press secretary Sarah Huckabee Sanders said the administration would allow the investigation to play out before taking action.

“We have to review and see what actually took place. We know that a lot of people in the industry have started to voice concerns about the amount of technology and taking the power out of the hands of the pilots, you saw the president talk about that in his tweets earlier today. This is going to be a process and we’re going to be in constant contact through the Department of Transportation, the FAA and make a determination at the appropriate time.” — Sanders

More than 40 countries — but not the United States — have banned Boeing 737 Max 8 flights after the crash in Ethiopia.

Some aviation experts believe the data recorders recovered from the crash site could provide strong early indicators about what went wrong during the fatal flight. The investigative team in Ethiopia announced today that the black boxes will be sent out of the country for analysis, but has not said where (Reuters).

The New York Times: Questions about the Boeing 737 Max 8 arose following a Lion Air crash in Indonesia in October. Safety on modern jetliners is affected by fierce industry competition, technological advances and pilot training. To compensate for larger engines on the 737 Max, Boeing added a computerized system, called a maneuvering characteristics augmentation system, to prevent the plane’s nose from getting too high and causing a stall. Faulty sensor data may have instead caused the system to keep pushing the nose down, possibly leading to the Lion Air disaster.

The Associated Press: Information void leads many to take action.

Reuters: Boeing needs to think faster than its watchdog. 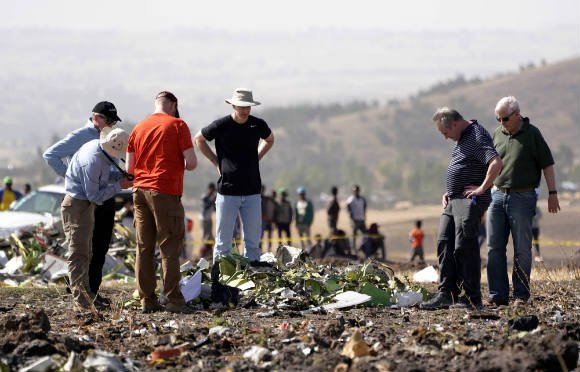 CONGRESS: Vice President Pence and Republican senators sought a last-minute agreement on Tuesday in an effort to stave off a Senate rebuke of the president’s emergency move to seize appropriated funds to build miles of new border wall.

One proposal discussed would have Trump sign new legislation that would make him forfeit his executive say-so to declare any future national emergencies under certain circumstances. The White House aim is to defeat a House-passed resolution of disapproval that has gathered support among Republicans in the Senate. Pence and Senate Republicans are looking to forestall a political embarrassment and the first veto of Trump’s term (The Washington Post).

But there are drawbacks to the proposal: Some GOP senators doubt that the mercurial Trump would comply with the terms. And the plan is hurt by the fact that a bill to curb the president’s power to declare national emergencies won’t come to the Senate floor until after the March recess, which begins next week (The Hill).

The proposed legislation that would prevent future use of national emergencies as an end-run around Congress is spearheaded by Republican Sen. Mike Lee of Utah (The Hill). Even if a deal among Senate Republicans is struck, those who are on the fence would have to first vote to reject the resolution of disapproval, and then hope the Lee measure passes the Senate and the Democratic-led House at a later date.

Jordain Carney reports that GOP lawmakers have searched for an off-ramp for weeks, juggled Trump’s tweets and entreaties by phone to stand with him, and they’re now down to the wire before an expected Thursday floor vote in the Senate (The Hill).

Meanwhile, House Democrats keep talking about impeachment, especially after Speaker Nancy Pelosi (D-Calif.) tried to steer her party toward the idea of challenging Trump the old-fashioned way, with support from voters in the 2020 election.

She seems to have succeeded for now; most House Democrats say they agree with her position. But a few rejected her hesitation, arguing there’s plenty of evidence to pursue impeachment of the president (The Hill).

As Niall Stanage writes, Pelosi’s comments during an interview with The Washington Post Magazine focused attention on a decision progressive lawmakers must make about whether to draw up a constitutional case of high crimes and misdemeanors against Trump, even if the GOP-controlled Senate never convened a trial (The Hill). An impeachment inquiry would be a weapon, but who gets hurt?

Scott Wong and Amie Parnes report that Biden, who would enter the Democratic primary leading in the national polls, has told at least one Democratic lawmaker that he’s running and asked for support (The Hill).

Biden spoke to the nation’s largest union of firefighters on Tuesday and teased his presidential plans.

“You know, I’d like you all to know I appreciate the energy you showed when I got up here. Save it a little longer. I might need it in a few weeks.” 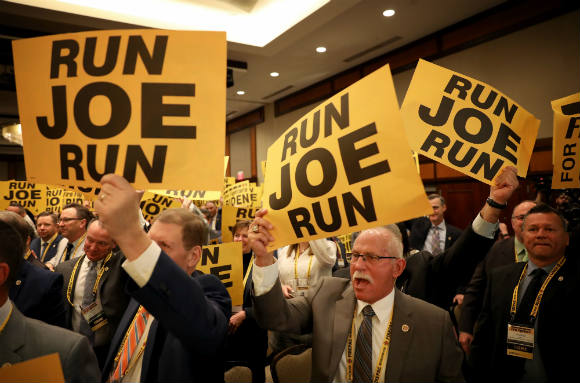 > Republicans think they have a secret weapon in appealing to voters in Florida. They’re pointing to Venezuela as a cautionary tale about what can happen if the U.S. adopts socialist policies that have been embraced by Democrats. Florida is home to the largest Venezuelan population in the country (The Hill).

> House Intelligence Committee Chairman Adam Schiff (D-Calif.) is talking about pursuing Trump with investigations and indictments when he’s out of the White House. Schiff on Tuesday said he’s investigating whether Trump “dangled” pardons to former associates and said the president should be indicted for breaking campaign finance laws once he leaves office (NPR).

Meanwhile, Reuters reports that special counsel Robert Mueller’s investigation is funded at least through September as speculation mounts that findings from an investigation that began in 2017 may be near.

And The New York Times reports that the attorney general’s office in New York has opened new investigations into the president’s business dealings.

Trump lashed out at the investigations and New York Gov. Andrew Cuomo (D) in a tweet. 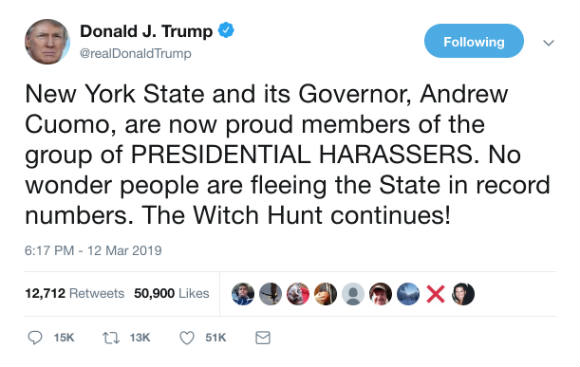 Abolish the filibuster and the Electoral College, by Rep. Seth Moulton (D-Mass), The Washington Post. https://wapo.st/2HgQW8c

The Senate meets at 9:30 a.m. and resumes consideration of the nomination of Neomi J. Rao to be a judge on the U.S. Court of Appeals for D.C. Circuit. The Senate Budget Committee at 2:30 p.m. questions acting Office of Management and Budget Director Russell Vought about Trump’s fiscal 2020 budget proposal.

The president receives a briefing about drug trafficking at the U.S. border with Mexico this afternoon. At 3 p.m., Trump will meet in the Cabinet Room with Senate Republicans to discuss trade. Two hours later, the president will join the spring 2019 White House interns for a group photograph.

Pence travels to Harpers Ferry, W.Va., to visit the U.S. Customs and Border Protection Advanced Training Center with Secretary of Homeland Security Kirstjen Nielsen. The vice president will be briefed, tour the facility, and address agents and trainees working with the Drug Enforcement Administration beginning at 11:30 a.m.

The Bureau of Labor Statistics releases the producer price index report for February at 8:30 a.m.

The House Oversight and Reform Committee holds a hearing about the administration’s compliance with the Freedom of Information Act (FOIA) and the implementation of the FOIA Improvement Act of 2016. Testifying are officials from the Justice and Interior departments and the Environmental Protection Agency.

The United States District Court for the District of Columbia is scheduled today to sentence former Trump campaign manager Paul Manafort during the second of two sentencing hearings. Judge Amy Berman Jackson is to weigh two charges to which Manafort pleaded guilty, conspiracy and witness tampering, as part of his admission that he had orchestrated a vast lobbying and money laundering criminal scheme (CNN). Manafort was sentenced last week to nearly four years in prison in a separate criminal case (The Hill).

➔ `Nationwide conspiracy’ in higher education: Hollywood actresses Lori Loughlin and Felicity Huffman are among those charged in connection with a $25 million college entrance exam scheme. The actresses and other defendants allegedly helped William “Rick” Singer and Edge College & Career Network get wealthy clients’ children into elite colleges and universities through fraud and bribes. Close to 50 people were charged by federal prosecutors (NBC News).

➔ Brexit: Three years after Britain voted to leave the European Union, lawmakers in the United Kingdom again failed to agree on the mechanics of divorce. Parliament on Tuesday overwhelmingly rejected Prime Minister Theresa May’s revised Brexit deal, the second such defeat. Parliament will vote today on whether to leave the European Union by a March 29 deadline without a deal — a scenario that could trigger economic chaos. There could be a Thursday vote to request a delay from EU leaders (The Washington Post).

➔ Capital punishment: Democratic Gov. Gavin Newsom of California reportedly is poised to make history today by using his executive authority to offer a reprieve to more than 700 inmates on death row in his state (NBC News).

And finally … Anglers say they’re eyeing the spring trout fishing season as a cure for winter blues and cabin fever. Grab that gear and get out there!

In Maryland, the Department of Natural Resources is poised to release more than 300,000 brown, golden and rainbow trout between now and June in 133 locations in 18 counties.

In Illinois, the spring trout season begins April 6 and attracts big headlines (The Telegraph of Springfield).

In Ohio, children have starring roles in trout derbies next month (The Times-Gazette of Hillsboro).

And in New York, the open-water trout season begins April 1, leading one eager fisherman from Glen Falls to lament the imperfect conditions. “The way this winter is going we will still be climbing over snow banks to get to our local streams,” wrote Don Lehman in commentary for his local newspaper (The Post-Star). 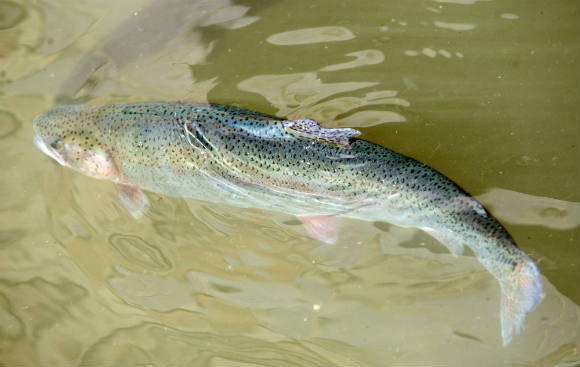