Most diverse Congress in history poised to take power

A wave of new lawmakers is arriving on Capitol Hill, with the most diverse Congress ever set to take power.

Republicans swell the ranks following their midterm gains, but there is more to members than just party affiliation. In that spirit, The Hill took a look at the composition, attributes and quirks of the voting members in the new 114th Congress.

{mosads}There is a record number of female lawmakers at 104, alongside 430 men, following the departure of former Rep. Michael Grimm (R-N.Y.).

Hispanic lawmakers will number 33, with 30 in the House and three senators. Twelve Asian-Americans will also serve, with 11 in the House and Sen. Mazie Hirono (D-Hawaii) in the upper chamber. There are two lawmakers of Native American ancestry, both from Oklahoma, Reps. Tom Cole (R) and Markwayne Mullin (R). 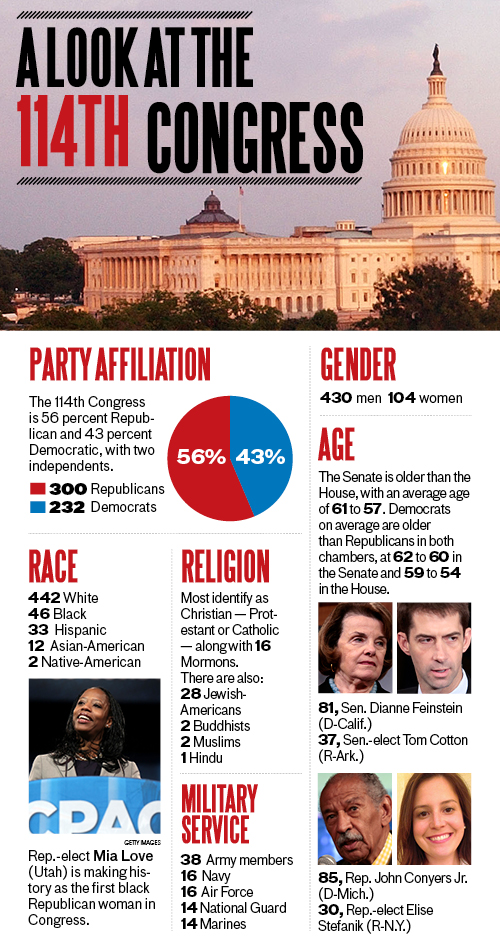 Senate Republicans gain some young blood in this Congress with additions such as Tom Cotton (Ark.), who is 37, and Cory Gardner (Colo.), who is 40. The departure of Rep. Ralph Hall (R-Texas) leaves Reps. John Conyers Jr. (D-Mich.) and Louise Slaughter (D-N.Y.), both 85, as the oldest members in the House.

Compared to numbers in the last Congress from the Congressional Research Service, the House stays steady at 57, but the Senate is getting younger, down to 61 years old on average, from 62.

A vast majority of lawmakers identify as Christian, either Protestant or Catholic, along with 16 Mormons. But a number of different religions are also represented in the new Congress: There are 28 Jewish-Americans, two Buddhists, two Muslims and one Hindu.

Lawmakers also come from a variety of work backgrounds, but one profession still dominates the group: 184 are lawyers.

There are a total of 13 lawmakers from agricultural backgrounds, including Rep. Mike Thompson (D-Calif.), who grows grapes at a vineyard back home and founded the Congressional Wine Caucus.

Twenty-seven have a healthcare background. There are also three former aviators, including Rep.-elect Martha McSally (R-Ariz.), who was the first female pilot to fly in combat.

Many come from other positions in public service: 10 have been governors, 32 were mayors, and 251 served in state legislatures.

Congress lost its last World War II veterans with the departures of Reps. John Dingell (D-Mich.) and Hall. But there are newly arriving veterans, including Rep.-elect Seth Moulton (D-Mass.), who won two medals for service in Iraq, and Sen.-elect Joni Ernst (R-Iowa).