How Rep. Eric Swalwell became the Snapchat king of Congress

Imagine a typical Snapchat user and you probably don’t think of a 35-year-old straight-laced congressman from California. But in a few short months, Rep. Eric Swalwell (D-Calif.) has skyrocketed to success on the app, using the platform to connect with constituents and grow his base.

If you’re unfamiliar, Snapchat is arguably the fastest growing social platform in America. While the app and its characteristic disappearing messages were once known as a way for high schoolers to trade selfies, the platform now has hundreds of thousands of users across all age groups who collectively view more than 8 billion videos per day.

Swalwell (@RepSwalwell) is not the first politician to join Snapchat. Presidential candidates like Jeb Bush, Hillary Clinton and Bernie Sanders were quick to set up official accounts in the fall. But Swalwell is one of the most prolific users in Congress. Unlike more image-conscious politicians who hand off Snapchat duties to  their communications teams, Swalwell does all the snapping himself.

The result is an entertaining feed of short videos, photos and an unfiltered peek into the daily life of a congressman. He snaps photos of his daily commute, shoots videos from his hometown in northern California, and documents his daily meetings as a representative of California’s 15th district.

“I realized that so many of our constituents were on Snapchat. It wasn’t just young people, but their parents had figured out that’s where their kids are,” he told The Hill.

“That’s when I realized that a lot of people are really going there whether it’s for getting news, staying in touch with friends, just cool, fun, interesting things that disappear in 24 hours. We just realized that this was another way to communicate directly with constituents.”

The app has allowed him to connect with constituents back home in a casual and direct way that Facebook, Instagram, and Twitter simply don’t allow. And given the app’s boom in popularity, younger voters are more likely to recognize Swalwell from his Snapchat channel than from a TV screen or Facebook page.

“I did not expect that as many people would follow me,” he says. “People now come up to me at the grocery store or in our community and say, hey, I like your Snapchat.”

However, unlike fellow Snapchat celebrities like Kylie Jenner or DJ Khaled, Swalwell tries to use his account to inform people about government. He feels it’s his duty as a lawmaker to demystify what goes on in Congress and says Snapchat has allowed him a way to stay accountable to those in his community.

“I want people back home to know that I haven’t forgotten about the responsibility of sharing what I do here as the person they elected,” he adds.

“I want to make people feel more a part of government. I want people to know that congress isn’t this House of Cards-type, rigid environment. In some ways, it’s a lot more like Veep. And that’s not a bad thing.” 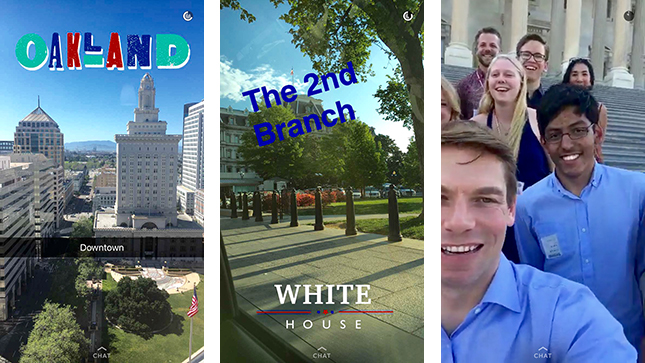 That said, there are some situations that, as a lawmaker, it’s difficult to document. “I’m on the House Intelligence Committee, so I certainly won’t be snapchatting from there anytime soon, for national security purposes,” he says.

“But I think that all of us on the Hill, most lawmakers at least, understand that we can restore a lot of faith that people have in their democracy by opening it up a little bit more and getting rid of a lot of the myths. Snapchat is a great way to do that.”

Swalwell is as passionate about the app as he is open government and is constantly encouraging other lawmakers to set up official profiles.

Swalwell offers personal Snapchat lessons to fellow congressmen interested in the app and can give a detailed walkthrough of Snapchat’s most hidden features.

“Diana Degette just signed up,” he says, “and Debbie Dingell, she and I are working this week on her account. Cheri Bustos is getting pretty good at it. On the other side of the aisle, Steve Daines is pretty great. It’s really fun to work with colleagues.” 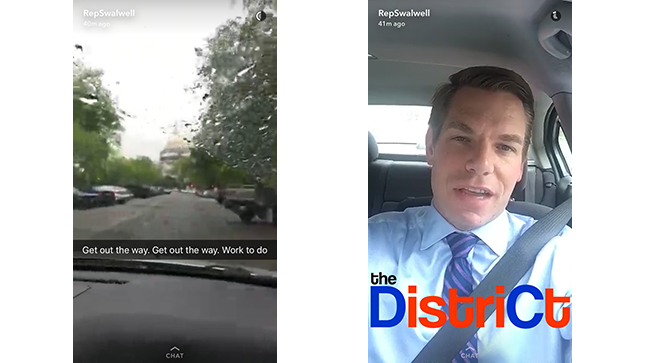 Swalwell even carries around a stack of homemade Snapchat flyers that he hands out on the House floor.

The flyers share key stats about the app and its use base and contain his Snapchat code, an image that looks like a QR code that fellow users of the app can scan in order to quickly add him. On the flyer, he encourages anyone with questions about Snapchat to contact his office directly.

It may seem strange for a member of Congress to be so enamored with a social media messaging app, but Swalwell says he is passionate about mobile technology and the opportunities it provides. For instance, he has frequently proposed allowing members of Congress to vote via text message on less controversial bills like naming a post office or a flight center.

His district in northern California sits just outside San Francisco, a short drive away from Silicon Valley and the sprawling campuses of Facebook and Google, and he credits the Bay Area with giving him the tech bug.

“It’s definitely the environment in the Bay Area. It’s a tech-savvy area,” he says. “I have found that you have to continue to innovate and look at how are people communicating.” 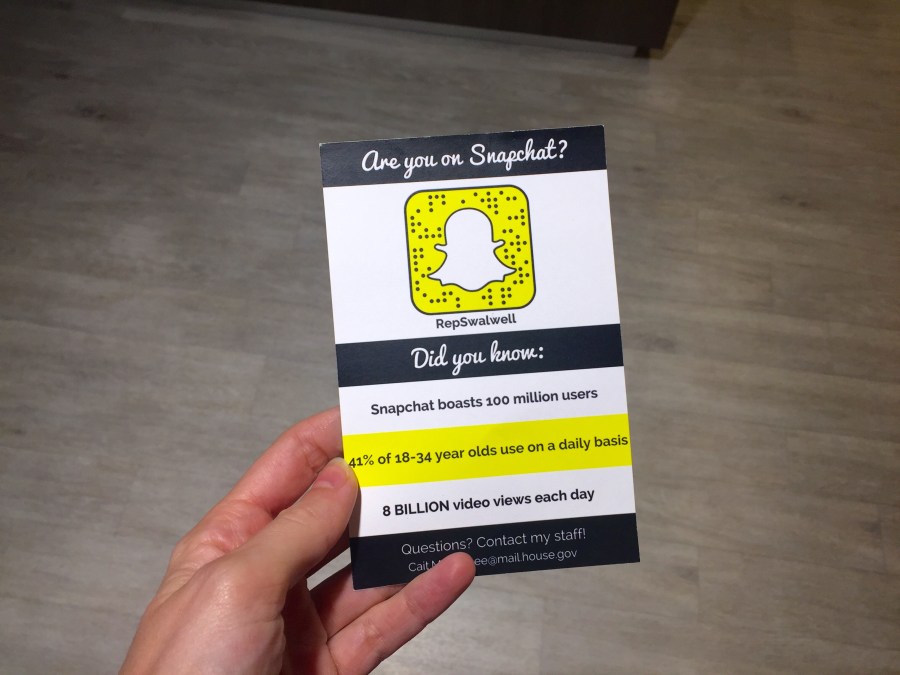 “As I pass out these cards, I tell the members, just trust me. Adopt this. In a year, we’re all going to be there anyway. Snapchat is where, not just young people, but all of our constituents are going. So let’s meet them there.”

Follow @thehilldotcom on Snapchat by scanning the code below within the app.